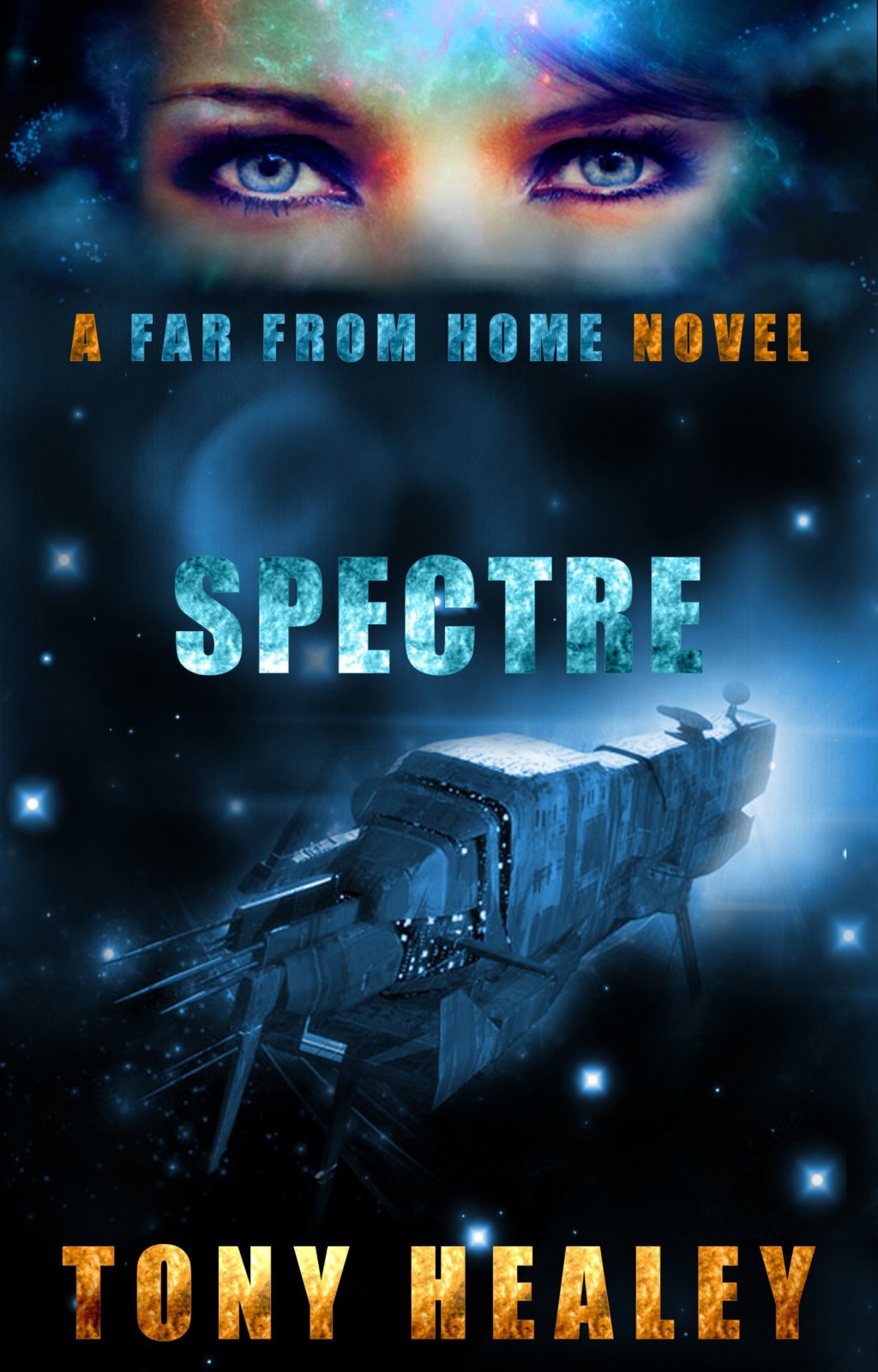 This is a work of fiction. Any similarity to persons living or dead is purely coincidental. No part of this work may be reproduced in any form without the express permission of the author.

About the Far From Home series

Follow Captain Jessica King and the intrepid crew of the starship
Defiant
as they embark on adventures that will take them far from home, to the furthest, darkest reaches of uncharted space. The series has proved a best-selling sensation and has captured readers imaginations the world over. So buckle up and prepare for the ride of your life!

Available in the Kindle Store!

Captain Rick Shaw looked like death as he slumped on to the bridge.

"Damn, sir, you look like hell," Commander Will Ardai said.

Shaw waved him off. "Just overslept."

"Yeah! Thanks to polishing off that bottle of Naxien Rum last night," Will said. "I did warn you, sir, the stuff's pretty potent . . ."

Captain Shaw sipped his coffee. His good eye was red and sore while the one covered by the eye
patch kept its secrets.

"Anyway, how come you're not so bad off, eh? You consumed a fair quantity of Naxien nectar yourself, as I recall," Shaw asked.

Will shrugged. "I've never had a problem holding my liquor, sir."

In truth
, he was feeling a little worse for wear himself, – though not so much as his commanding officer.

Captain Shaw stiffened, chest puffed out. "I don't know what you're implying, Commander. I have the constitution of an
ox
," he said with mock bravado.

A series of beeps issued from the front of the bridge. Kalar's sextet of arms flew in all directions to address the series of warnings flashing across the helm. The Xantian pilot craned his squashed head about to look at them, his one big black eye taking in Shaw's rough appearance.

"Captain, I do declare you look like you've been chewed up and spat out by a Taralian moose."

"What is it, Kay?" Shaw
grumbled, shooting Will a look of barely concealed contempt as he walked down to the helm. Up ahead, on the viewscreen, a tiny pinprick of colour grew larger every second against the black backdrop of space.

"We're on final approach to Starbase six," Kalar said. "Should be a few minutes. Co-ordinates locked
in."

Shaw set a hand on the Xantian's back. "Good. Give them the usual codes and registries and let me know the minute we're docked, Kay."

The Captain made to leave the bridge. Commander Ardai stood there, hands spread wide before him. "Where are you going now?"

"Have a shower, run a razor over my chin. Make myself respectable," Shaw snapped.

"Well I don't think
your
comment helped any," Will said.

"Maybe I shouldn't have got him on that rum last night. But he wanted a drink and it's all I had in my quarters," Will said. "You know what he's like when he's in one of those moods."

"Indeed. Did I hear you say it was
Naxien
rum?"

Kalar gave his closest approximation to a laugh. "On Xantia, we give that to the younglings. It makes for a perfect bedtime tonic to soothe them off to sleep. Quite weak."

The
Spectre
slipped smartly into position and Will watched as Kalar nudged the ship to port until their docking ring had mated with that of Station 6.

"Expertly done there, Lieutenant," Will said. "If I didn't know better, I'd say you've got a bright career ahead of you."

"Always a pleasure," Kalar said. He set about shutting down the ship's systems one by one, his six appendages flicking switches all around him.

"Let me know when you're done. I'll go find the Captain," Will said. "See if he's in the land of the living."

Ardai walked out into the hall and headed for Shaw's cabin. He rapped his knuckles on the door, and it slid back a second later. The Captain looked a world apart from the man who'd dragged himself onto the bridge only a half hour before. Shaw was nearing fifty, with stark shocks of grey at both temples. He was well built, lithe, but stocky. Scars ran up his forearms from one of the many engagements he'd told Will about, though the Commander couldn't remember exactly which one. Shaw always wore a patch over his left eye – the skipper had lost it in an unfortunate incident on Maino V years before. Will asked him once why he'd not had a prosthetic eye fitted in its place, to which Shaw just scoffed.

"Reminds me of my mistakes. In this instance, to always assume the crash position when I'm told to," he'd said at the time. "I'm of the opinion all scars are lessons well learnt."

That attitude didn't surprise Will. After all, Shaw was a man who loved to gamble, who drank heavily. Who read crumbling copies of books. The classics – the kind of stories that made Shaw, for all his swagger, for all his experience as a fighter, sob like a heartbroken child when he'd had one too many. The night before, in his cabin, Shaw had broken down a little as he told Will about a book he'd just finished. Will had helped him onto his bunk, and he lay there in the dark, tears glistening in his one, red eye.

"I can't help thinking about the end of that novel, William," the Captain had said. Another side effect of him having had a drink was his tendency to refer to Ardai by his full name.

Will shook his head.

"I don't have a clue, sir," Will said, wanting to just leave him there, get to his own bunk and try to get his head down. Wanting to evacuate the ship with all hands but leave the Captain behind, still babbling.

"I never refuse an order, sir. Now get some rest."

It wasn't until he lay on his own bunk, his quarters spinning around him in a drunken haze that he thought on Shaw's bouts of melancholy. They came only with drink, as if the booze unlocked a part of him he kept well-hidden most of the time. Something painful and sad inside. Will knew the Captain had money worries – a little too much gambling at the roulette wheel had seen to that – but could that have been the cause for his occasional fractured state?

The line from
A Tale of Two Cities
did seem final, now that he thought about it.
Perhaps it's his own mortality that plagues him,
Will thought.

He smiled as the realisation dawned on him. It was entirely possible Rick Shaw, skipper of the
Spectre
, was going through a midlife crisis.

Well
, he thought.
If crying for the tragedy of old books is the worst of it, then it's the least of my worries . . .

"Reports of my general decay are grossly exaggerated," Shaw quipped. He brushed past his second in command and headed for the airlock. "Are we all set?"

"Kay's locking her down now," Will said, following behind.

"Excellent. What about Punk and Barbie?"

Will was about to answer when two loud voices erupted from the back end of the ship.

"Ah, damnit, is that them
, scrapping again?" Shaw asked.

His question was followed by a loud crash and more shouting. Punk stormed up the corridor, face set with a scowl, brushing off his fur. The Alpor looked more than little worse for wear. "Crazy bloody Mantipor! She's lost 'er mind!"

"What was it this time?" Shaw asked.

The Alpor stood no more than four feet high with short black hair all over its body and a snout that resembled that of a large badger. In fact Punk could have been confused for one if it hadn't been for his gun belt, black clothing
, and boots, finished off with a red bandana on his head, triangular ears poking up behind it.

"Having one of her soddin' rages again. All I did was move one of those crates. You know, the ones we got off resupply the last time we stopped off. Wanted to have a look an' see if we had any rolls of optic cable. Next thing I know,
boof!
She's coming at me, shouting her bleedin' mouth off, throwing boxes at me 'ead!"

"Will? Do you want to go down there and have a chat?" Shaw asked his second in command.

"Uh . . . no, not really," the Commander admitted. "She's in-season right now. I daresay it's why she's flying off the handle."

Getting on the wrong side of a Mantipor in heat wasn't exactly at the top of his bucket list.

Punk folded his arms. "I don't know if I can keep up with it, mate. Honest I don't. Might 'ave to get meself a transfer, she carries on."

"I'll talk to her," Will said. Another loud series of crashes and thumps came from the back
end of the Spectre. Commander Ardai swallowed. "Later, when she's calmed down."

"Good call," Captain Shaw said. He looked up at the lights over the airlock door, willing them to turn green so he could get off the ship fast as possible. They remained frustratingly red.

"It's not good for me rep, sirs, you know wot I'm talkin' bout, dontchya?"

"We do," Captain Shaw said. "Leave it to us. Maybe we'll have to have her, you know,
looked at
or something."

Will scoffed. "Yeah, good luck with that one."

Mercifully
, the lights over the airlock turned green. "Thank God," Shaw said, swiftly exiting the ship before the conversation could go any further.

"I'm with the Captain. You three leave the ship and have a wander. But report back. Let's not have this turn into another fiasco like we had on Romycin. Behave yourselves."

"Right you are, mate. I'll, uh, let ole Kalar tell 'er we can leave, though, eh? Think I better steer clear for a couple of hours," Punk said. He headed for the bridge. Will watched him go, shook his head, then followed after the Captain, glad to be out of Barbie's way himself.