Read Far From The Sea We Know Online

Far From The Sea We Know 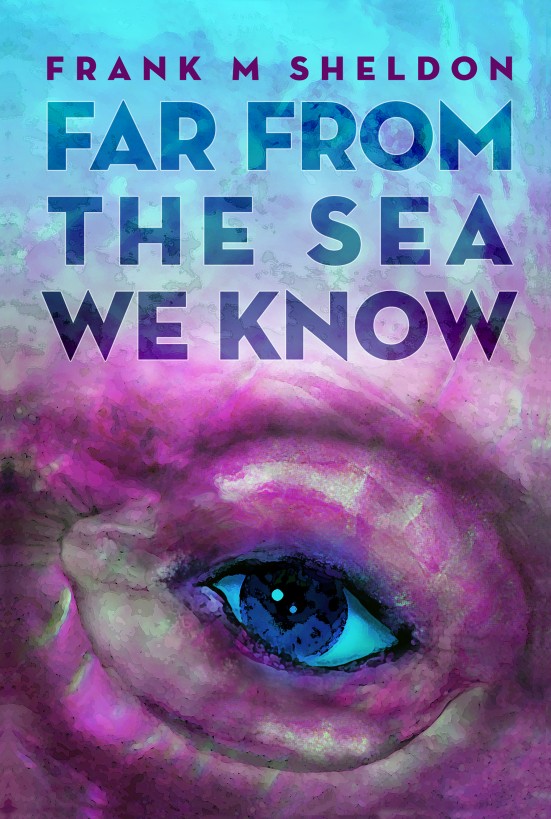 Copyright 2014 by Frank M. Sheldon. All
Rights reserved. No part of this manuscript may be reproduced in
any form or by any electronic or mechanical means including
information storage and retrieval systems, without permission in
writing from the author, except for a reviewer who may quote brief
passages in a review. All characters appearing in this work are
fictitious. Any resemblance to real persons, living or dead, is
purely coincidental. S-50506

Far from the Sea We Know

“Fiction is
obliged to stick to the possibilities. Truth isn’t.”

Somewhere off the coast of the Pacific
Northwest, not long before the beginning of the twenty-first
century…

“Three points off the starboard bow!”
Matthew shouted above the grinding gears. It did no good. The hulk
of a man he had yelled at still stood staring at the ocean swells
as unseeing as a stunned cod. To be safe, he disengaged the winch,
took a step back and leaned hard against the gunnels of the
Eva
Shay
before speaking again.

“The whale up front,” Matthew yelled again
while pointing toward the western horizon. “Gilliard, the whale is
Purple!
”

“I ain’t…deaf,” the man eventually mumbled
back, and that too was strange, for Gilliard’s mouth was famous on
the waterfront for having a life of its own. Matthew had never seen
the man so utterly speechless. This gave strength to doubt, so he
again looked westward to compare the clear evidence of his own eyes
with what his mind argued could never be.

They had just been securing the last of the
gear for the trip back to the southern reaches of British Columbia.
As always seemed to happen after the last of the catch was in, the
adrenaline that had kept them going for six days and nights of
fishing was beginning to dry up. Yet now, as if reading his
concerns, one by one the tired crew finally looked up and soon all
were staring out in the same direction. There before them, fifty or
more gray whales in tight formation were heading north on their
annual migration. An unprecedented grouping like this was
incredible enough, yet their odd behavior was not what held their
gaze now. It was the whale leading them.

No one spoke a word until Gilliard’s voice,
at last reborn, came booming above the sound of the ship’s engine.
“Goddamn freak or maybe…hey! Bet you a beer as cold as my old
lady’s heart that those science bug-heads are behind this.” He
paused to launch a huge gob of spit over the rail. “Going to drive
us all down to handouts, spending our tax money like it’s their
due! What you bet?”

Matthew gave him a sharp glance before
looking back to the whales.

“Now, professor, you going back to your
schooling down in the States next week, ain’t yah? Still believe
you can become one of those useless fools?” Gilliard spat again.
“You never even learned to bait a hook right, so I doubt they’ll
let you join their precious little tribe but, hey, why don’t you
ask them why they did it? Painting whales purple so they can track
’em or something? Hell, why stop there, why not give ’em cute
little hats—Hey! You listening to me?”

Matthew was not. He was still facing
seaward, completely transfixed. With the light behind them, the
gray whales stood out clearly from the distant swells, their
arching backs pouring in and out of the seas like warm tar. Then he
felt the
Eva Shay
come about and glanced up to see Captain
Juvinor in the pilothouse with his hand on the wheel. He had
propped opened the window and brought a pair of ancient binoculars
up to his old, yet smooth, pink face.

Gilliard, his eyes squinted, looked up
toward the wheelhouse. “So what is it, Captain?”

“I can only tell you what it ain’t,” the
Captain called down, continuing to peer through the binoculars.
“She’s no whale God ever made.”

“Devil fish then,” Gilliard said under his
breath. He glanced around, but his smirking face found no
takers.

Matthew vaulted over a hatch cover, and ran
up toward the bow. The cold spray on his face was reassuring, but
nothing else was. Everything he saw seemed etched into his eyes,
every smell and sound amplified. A cold wind played up from behind
as they changed heading and blew a lock of dark curly hair across
his eyes. He pushed the hair back under his baseball cap, finding
the sensation of his hand comforting.

The Captain’s new heading would soon have
them closing in on the whales. The unmistakable smell of
fresh-plowed earth coming from the immense sea mammals wafted past
Matthew like a false call to home. He watched the whales rise and
fall in unison, their slow dance hypnotic, but kept going back to
the lead whale. Her hide was covered with large blotches of
garishly purple skin, intermingled with the usual dark shades of
gray. The cartoon-colored flukes, splotched with violet and magenta
were an insult to his eyes.

Matthew looked astern to the other crew who
were lining the gunwales and yelled, “Anybody have a camera?”

He turned back, and every joint in his body
instantly locked. The lead whale was suddenly much closer and had
turned straight toward the
Eva Shay
. Now it stood upright in
the water as if spy hopping, but was dead still. The whale’s
colored surfaces began to shimmer and the light seared his eyes
like a cold flame.

His knees had given out and his hands were
grasping the railing so hard that his fingers were bone white.
Crosscurrents of feeling flooded through and left him drained. He
shook his head, but wished he had not. For the first time in his
life, he was seasick.

He got his breath back and tried to speak.
Words rolled out of his mouth, yet he did not know them as his own
and they left without memory. His heart pounded to a crescendo,
then calmed as the reverie fell away like a morning mist. A gull’s
cry overhead ended in a mad laugh.

Matthew looked in every direction. There was
not a whale in sight. All his crewmates had lost their footing.
Some slumped listlessly over hatch covers. One man was trying to
stand. Gilliard sat on the deck like a baby, with glazed eyes and
splayed feet.

Matthew found it hard to remember what had
happened. He tried to play it back in his mind and describe it in
words to himself, but his attention kept wandering.

He looked at his watch: five-seventeen in
the afternoon on May twenty-ninth. At least he got the time.

Up in the wheelhouse, old Livijo was
shouting as he stared at the sonar unit.

“Haaa,” Livijo yelled, “I have the fish
finder, and it go so crazy!” He thumped the instrument like a
preacher on his bible, gripping the open window frame with the
other hand. A desperate smile contorted his face as he glanced back
at the screen.

“First is stuff. Stuff all over the place,
and now nothing—wait! Wait, is back, back now, the screen back, but
no show the damn thing. They…gone, gone, all them gone. Bottom,
yes, is right, nothing else, they move so fast, too fast, sweet
Mother of God, me never—”

“Livijo!” Captain Juvinor silenced the old
man. Sadness came to Juvinor’s eyes. He closed them and whispered
something to himself, paused for a moment, and then leaned out the
window toward the crew. “There’s a weather front moving on us, time
we get out of here. Okay, feet on the deck, now! See to your line,
Gilliard.”

It was late. They needed to finish stowing
the gear and ice the rest of the fish. He made himself work again,
but he kept a watch on the horizon. The sky was darkening.

“Painting whales,” Gilliard said, as he went
through the motions of tightening already taut lines, his voice
robbed again of its power. “Ungodly bastards to do a thing like
that.”

His words broke into mutterings, and then
trailed off to one quiet sob.

Matthew had gone to have a drink at the
High Life
, his favorite bar in Victoria. It was his last day
before heading back for classes. Through the picture window looking
south, a light from over the water in Washington State blinked like
messages waiting. In many ways he preferred his quieter life here
in British Columbia, but he was looking forward to completing his
degree.

Unfortunately, Gilliard had just spotted him
and invited himself to Matthew’s table, and was now going on and on
about his belief that an experiment gone wrong was surely
responsible for all they had witnessed on the
Eva Shay
.

“Why’d you have to bring that up?” Matthew
said. He stared into his glass, annoyed. Matthew did not want to
get into it at all, not with these other characters from the bar
around. He signaled the waitress, so he could pay his tab and slip
out.