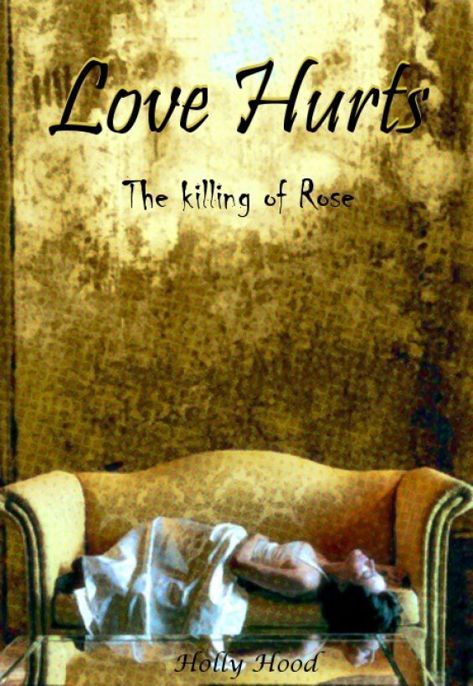 Love Hurts: The Killing of Rose

The Killing of Rose

Letters to You V.5

This is a work of fiction. Names, characters, places, and incidents either are the products of the author’s imagination or are used factiously. Any resemblance to actual persons, living or dead, events, or locales is entirely coincidental. Do not duplicate or distribute without the permission of the author.

The characters and events portrayed in this book are fictitious. Any similarity to real persons, places or things living or dead is coincidental and not intended by the author.

For my family, with gratitude and love.

Big thanks to everyone. It’s simple to pick a select few to thank. But this time I will say thank you to everyone, readers, family, friends, life, and god. Thank you for inspiring me.

I hope everyone enjoys this series. It’s my second, and I am really looking forward to giving Wingless a run for its money with this one.

And to Mom jr, Keep on fighting!

Soft yellow light streamed through the tall windows of the diner. The sun was close to disappearing all together. The last of the patrons finished up their cobblers and coffees and even they were packing up to leave.

Rose hummed a soft tune as she busily swiped the counters with an old rag making fast circles in hopes of getting home before her boyfriend. She wanted to clean up a little before he got there, she hated for him to see her in her work clothes.

The final chime echoed the desolate confines of the diner. Rose looked around as she untied her apron. She was tired. But she still had to make the long drive to the country where she lived. It took her thirty minutes on a good day to make it home.

Rose slung her apron over a box, her high heels clicking ever so gently against the concrete floor of the restaurant. That’s when she saw him. The image was enough to set her heart into a million fluttery beats. She stumbled backwards completely shocked.

“
You’re not supposed to be in here.” She told Sam. Sam was only supposed to be a fling. A onetime mistake that she regretted every day since it had happened. She knew from the beginning she would live to regret the day she involved herself with Sam there was just something off about him.

Sam wasn’t wasting anytime. He grabbed hold of Rose’s wrist yanking her into the back room of the diner. The room they kept all the non perishables. He was there for a reason. Sam was angry. Angry that Rose had shunned him so many times before after the night they had together. But now he had his moment to make her pay for ignoring him for so many months.

He wanted to be with her but he didn’t understand why. His head was so filled with confusion after Rose. Rose had to be his. But she never saw it the same way that Sam did. So now he just wanted to get rid of her.

Brandishing a large knife—the kind he carried in his pocket on a daily basis. He stepped forward, her arm yanking his violently as she struggled to break free—but she never was going to get loose, Sam was much stronger then Rose. Rose was a petite girl and Sam had a good hundred plus pounds on her. He brought the knife to her throat, his heart egging him on, the adrenaline coursing through his veins was exciting him more then he thought it would.

“
Rose, why won’t you just be mine,” Sam whispered in her ear, his rough chin prickling her flesh from his lack of shaving. He smelled like a brewery.

Rose pulled at his arm, searing her nails into his flesh. “Let me go, Sam,” she pleaded, but it was no use. Sam had his mind made up and she knew this. She could feel it.

The cold metal ripped through her flesh quickly. Rose cried out in agony as she felt something warm evading her undershirt. She gasped, first staring down at her bloody hands and then back up to Sam. The knife crashed to the ground with a clang and that was the only thing she could hear anymore. She feared it would be the last thing she heard.

“
I wanted you to love me like you do Tad. But you didn’t love me and you never will. So now I want you to die,” Sam said. He felt it imperative to tell her while she was standing in front of him bleeding. And he planned on staying until she took her last breath. Then he would be satisfied.

Rose was hunched over now. She took in short painful breaths, tears falling the wrong way and meeting up with her blonde hair instead of her chin like she was used to when she cried. When she couldn’t stand any longer she dropped to her knees staring at the knife with her blood on it, Sam’s black shoes inches away from her. He was going to let her die.

Rose prayed for her life, prayed that someone would find her. And lastly, she prayed that her boyfriend would never find out what she did. She was okay to die for her wrong doing but she didn’t want to hurt her family.

Sam kneeled. He lifted her face with his large hand, one that she once enjoyed against her skin. But now it only made her stomach hurt more than it already did. Why hadn’t he just stabbed her in the heart?

“
Please don’t tell anybody what we did, Sam. Just leave and let them think it was a robbery. Go. Now.” She pleaded. But this only caused Sam to become even angrier and more upset. He balled his fist, sucking in sharp breaths of air. Swinging his fist in a blurred daze, he came in contact with Rose’s face over and over again. Eventually he grew tired and dropped back against the counter, trying to catch his breath. He pried his ring from his swollen fingers wiping the blood against his shirt pocket.

She was crumpled in a heap on the concrete floor. Her hair draped over her badly battered face. Sam pushed it away, staring at the barely identifiable beauty she once was. He let out a long grunt, standing up, batting at her lifeless body with the toe of his shoe. He waited for her to move, to breathe, to do anything.

Sam listened to the passing cars, the ticking of the diner clock. But he heard nothing from Rose.

The diner door chimed like every time before when a patron was passing through.

Rose’s eyelids twitched under her swollen lids. She slowly opened her eyes afraid to make too much movement for fear Sam was close by. Maybe he had intentionally chimed the door in hopes of calling her bluff. But after a few more minutes she raised her head, looking around the back room, her blurred vision making it hard to see that he was gone, and she was still alive.

On to the next

Sam vigilantly watched the crowd. The bar was hopping. All sorts of college aged girls were up for partying and getting drunk. He held tight to his glass of vodka, watching the many varieties of girls as they passed by him, some bashfully giving him a smile. Some not shy at all.

“
Hey there, handsome,” a tall, lengthy, blonde said, doing a mouth-watering walk around him like a furry feline before she came to a stop in front of him.

Sam smiled, taking all of her in. She was wearing a short red dress, cleavage out for the entire bar to see. She was asking for it. “Hey yourself.”

She offered him her hand. Sam obliged. It wasn’t hard to get any girl he wanted. He was good looking and well-off. One look at his dirty dish water blonde hair or his muscular hulking frame was enough to break through the toughest persona. He was magnetic. He was charming. He knew what to say. It was just a matter of how long he wanted to portray all of these things before it got old and he wanted something else.

He watched her red heels excitedly click across his driveway. They were at his residence and this didn’t bother him at all. He lived on a street with less than five houses. Amongst a rather prosperous group of people that were too busy traveling the world to notice what Sam was busy doing on his private property.

“
Wow,” she said, staring at his large oil painting hanging in the foyer. He crept up behind her, nestling his face in her neck, breathing in her cheap floral fragrance that quite honestly gave him a headache. She stroked his arms, enjoying the feel of his muscles like all the girls before her.

“
Sorry for the mess,” he told her, unbuttoning his shirt. She stopped admiring the painting and put all her attention back into admiring him, just like he wanted. “What did you say your name was again?”

She smiled, amused by the question that he so easily paired with an innocent enough grin. He knew her name was Hannah. But he liked to put them on edge and take them down a few notches.

“
Hannah. I told you like three times now.” She giggled, allowing him to unzip her dress, stepping out of it as it dropped at her feet. She walked through the rest of his home in nothing but her panties and red heels. And he thought it was hot. He enjoyed watching her smooth back arch and crane at every luxurious item she marveled over.

He poured two glasses of wine while she went on and on about just how awesome his house was.

“
Hannah, why don’t we go to the bedroom?” Sam asked, shutting her up. She agreed, taking the glass from his hands and followed him into his bedroom.