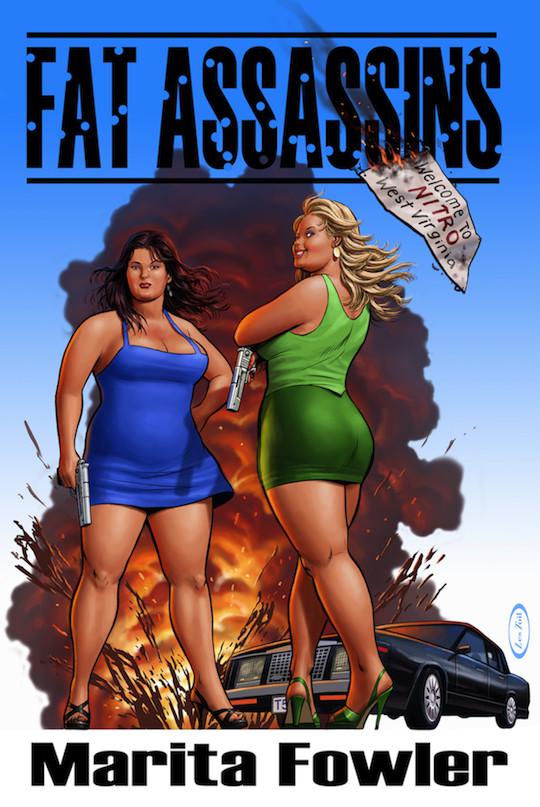 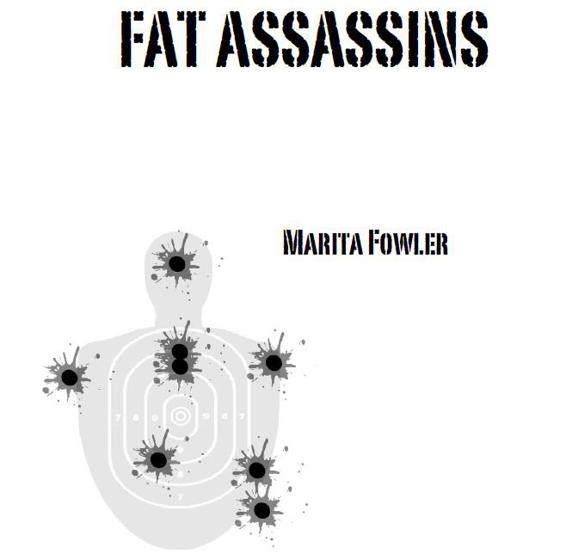 This is a work of fiction. Names, characters, places, and events are either the product of the author’s imagination or are used factiously. Any resemblance to actual persons, living or dead, events, or locales is entirely coincidental.

Visit us on the Web!

Fat Assassins. Copyright © 2011 by Marita Fowler. All rights reserved. Printed in the United States of America. No part of this book may be used or reproduced in any manner whatsoever without written permission except in the case of brief quotations embodied in critical articles and reviews.

I will kill you.

Standing here next to my best friend with our guns raised, ready to pull the trigger - my mind is devoid of remorse. I leveled the barrel at his chest, marking half-a-tac down from his gaudy gold medallion of Saint Avellino.

I never thought I would be okay with shooting someone.

Don’t get me wrong, being the harbinger of death isn’t part of my 5 year plan and the parentals would be shocked by my thought bubble. I was raised in a gentle, hippie home where any type of criminal behavior was highly discouraged. I’d never even fired a gun until a few weeks ago, when a lottery ticket set my world askew. They say winning the lottery makes people do crazy things.

Crazy. Yup. That’s the best word to describe the past few weeks.

It’s hard to believe this all started when my best friend, Ulyssa, surprised me with a birthday party. I don’t blame her though, there’s no way she could have known how things would end.

“Happy Birthday Hooker! Ready to get sideways?” Ulyssa asked mischievously, poking her head into the bathroom. She was wearing a sheer black top over a red satin tank top with snug fitting black jeans tucked into a pair of slouchy black boots. Her dark glossy hair was piled high on her head with stray ringlets surrounding her face.

Get sideways?
Those are dangerous words coming from her. I opened the medicine cabinet to make sure we had aspirin for my upcoming hangover.

She stood there with a face cracking grin that made my stomach churn.

“Are you getting blotchy already?” Her grin grew bigger. “You’re so white-bread.”

Ignoring her taunt, I finished applying my lipstick and checked my teeth for streaks of color.

“Let’s go, Shasta! Them beers ain’t gonna drink themselves.” She dragged me down the hallway and shoved me out the front door. She’s deceptively strong, so there’s no point in putting up a fight.

This is how our friendship’s operated since she masterminded our breakout from third grade fat camp. It was called a retreat, but any place that serves tofu for breakfast is definitely a fat camp. We met on the first day, when we were paired up for self image affirmation. We spent ten minutes repeating scripted dialogue before we decided we were both very happy with our self image. No affirmation required. We spent the next two days working together, mapping out the camp and planning an exit strategy. On the third day, we snuck out at dawn and started our long hike home. Well, we hiked until our parents picked us up after a phone call from the camp counselor. Except for occasionally being grounded - we’d been inseparable ever since.

“Why can’t we just go to the movies or cruise Sonic?” I begged.

“Shasta May Murray. We are not cruising the strip tonight. Get in the car!” Her southern drawl gets worse, the bossier she’s gets.

I settled into the furry seat as she backed the car out of the driveway. A tribal tattoo of pink, orange and yellow racing stripes twisted down the sides of the 1976 Pinto. The car’s Mardi Gras persona always makes me feel like I’m riding in a parade. One day I’m gonna get some beads and sling them at unsuspecting pedestrians.

Ulyssa inherited the cruising wagon from her parents on her sixteenth birthday. Most family heirlooms are houses or jewelry passed down through the generations, but the Grants bequeathed their only daughter a flamboyant Pinto. Motherly guilt and the lack of a down payment are the only things standing in her way of getting rid of it.

The car creaked to a stop near the gas pump and Ulyssa handed me a ten dollar bill. “You pay and I’ll pump.”

Her ex-boyfriend, Johnny, works as a big rig mechanic at the only gas station in town and she avoids going inside anytime we stop. I don’t know if you could officially call him an ex-boyfriend though. She’d only gone on three dates with him before deciding he was too in love with his truck to ever commit to a woman. So she dumped him. He’s used to getting what he wants, so Ulyssa’s rejection drives him crazy.

The rumble of the big rigs pulling into the truck stop always makes me nervous, so I triple checked before crossing the road and entering the store. Johnny was leaning against the counter in oil covered work clothes talking to Bubba.

“Hey there, Shasta!” he said staring past me at the gas pumps. “What are ya’ll up to tonight?”

“Um. Not sure. I think Ulyssa’s got a birthday party planned.”

“Sounds like it’ll be a lively night with a birthday girl in the house,” Bubba said, taking the money from me. Bubba’s a redneck nickname usually reserved for corn-fed country boys missing some teeth. But, everyone thought it was hilarious to call an orange tinted New Jersey transplant ‘Bubba’. The name stuck and he’d become an honorary redneck running Buck’s karaoke nights for the past four years.

“Thanks. See y’all later,” I said, disappearing out the door.

The parking lot at
Buck’s Shot
was nearly full, confirming my suspicions that she’d organized a full scale party for my twenty-third birthday. Tossing Ulyssa a dirty look, I pulled myself out of her fruit striped car.

Walking into the belly of the old converted barn, we gave our eyes a few seconds to adjust to the shadowy bar. Even in the low light, I felt my neck blotching up when my cousin, Tater, yelled at us from across the dance floor.

“Hey, cuz. Happy Birthday!” He ran through the crowd knocking people out of the way, and grabbed me in a bear hug. When he’d finished crushing my ribs, he stepped back and handed me a FedEx envelope.

“Ah. Thanks, Tater. You shouldn’t have,” I said, shoving the envelope into my pocket to avoid any public humiliation. I really meant it. He shouldn’t have.

Last year, my birthday present was stolen CDs from the local pawn shop. I knew they were stolen because he apologized for the missing cases. Apparently, he had to leave ‘em behind at the pawn shop so the owner wouldn’t notice the missing discs. The music selection is really limited, so I ended up with the soundtracks for
Platoon
and
Ghostbusters
. Not my normal music preference, but he was really proud of the gift, so I kept them in the car to prove my gratitude.

And I was
grateful
. . . that he didn’t get caught by the redneck owner who takes a hard line stance on thievery. He keeps a fully loaded Winchester on premise for security purposes, but doesn’t usually shoot shoplifters. He simply confiscates valuable items off the would-be thieves and adds them to his inventory for resale.

“We got beers to drink,” Ulyssa said, clipping Tater with her hip as she made her way towards the mirrored shelves of alcohol behind the bar.

We bellied up to the bar as Buck sat two Michelob Lights on the counter. “Happy Birthday Shasta! These are on the house.”

I leaned up and planted a kiss on his wrinkled cheek. “Thanks, Buck. You’re a sweetheart.”

He blushed and shooed us toward my designated birthday table near the bandstand. Ulyssa had gone overboard, decorating the table with a mixture of bachelorette novelties and over-the-hill gag gifts. It looked like a birthday party for a sex crazed senior citizen. My face flamed purple and Ulyssa grinned, proud that she’d hit the mark. I sat down, surrounded by lewd novelties and black crepe paper, and took a long swig of my beer.

I glanced around the bar trying to figure out who was here to celebrate my birthday and who was here out of habit. My eyes landed on a cozy couple near the bathrooms.

Is that Ulyssa’s boss in the corner with another woman?
I nudged Ulyssa and she followed my stare.

“Ooohhh. There’s rumors flying at work, but I didn’t believe them.” She leaned forward for a better look. “Oh, no. That’s Salvo’s wife.” She looked around nervously. “I hope he don’t find them here. He’ll blow up this whole bar, just to kill ‘em.”

“Do you really think he’d blow up the bar?”

“Probably. He’s got a weapons bunker somewhere up in the mountains. He’s not all there and Rick knows that!”

“Some people don’t have any sense.”

“Tell me about it.” Ulyssa looked at her watch before standing up and grabbing my empty bottle. “You stay put! I’ve got the next round.”

My anxiety skyrocketed. She never checks her watch when we’re partying.
Please no strippers
, I silently prayed, staring at the door. I relaxed a little when the rest of our dysfunctional gang came through the door. The twins, Mitchell and Mitsy, held the bar doors open for Sam who was carrying a cardboard box. They all gathered secretively around Ulyssa at the bar before following her back to the party table. I braced for embarrassment, but they just wished me happy birthday as they sat a giant cupcake on the table.

Whew, I got off easy.

Mitsy and Sam cheered as Ulyssa shoved the crown on my head.

“Traitors,” I scowled, making them laugh and hoot louder.

“Keep it up and I’m moving tables,” Mitchell announced, pointing at the bouquet of penis straws. “I already feel like my masculinity is being tested.”

“What would the guys at the factory think if they could see you now?” Ulyssa jibed.

The Emperor of Ocean Park by Stephen L. Carter
The Children of Urdis (Grimwold and Lethos Book 2) by Jerry Autieri
A Disgraceful Miss by Elaine Golden
Oswald and the CIA: The Documented Truth About the Unknown Relationship Between the U.S. Government and the Alleged Killer of JFK by John Newman
i 75f9a7096d34cea0 by Unknown
Zocopalypse by Lawson, Angel
Turning Point by Barbara Spencer
Peregrinatio by Matilde Asensi
The Echo of Violence by Jordan Dane
Luke's Absolution (The Colloway Brothers Book 3) by K.L. Kreig