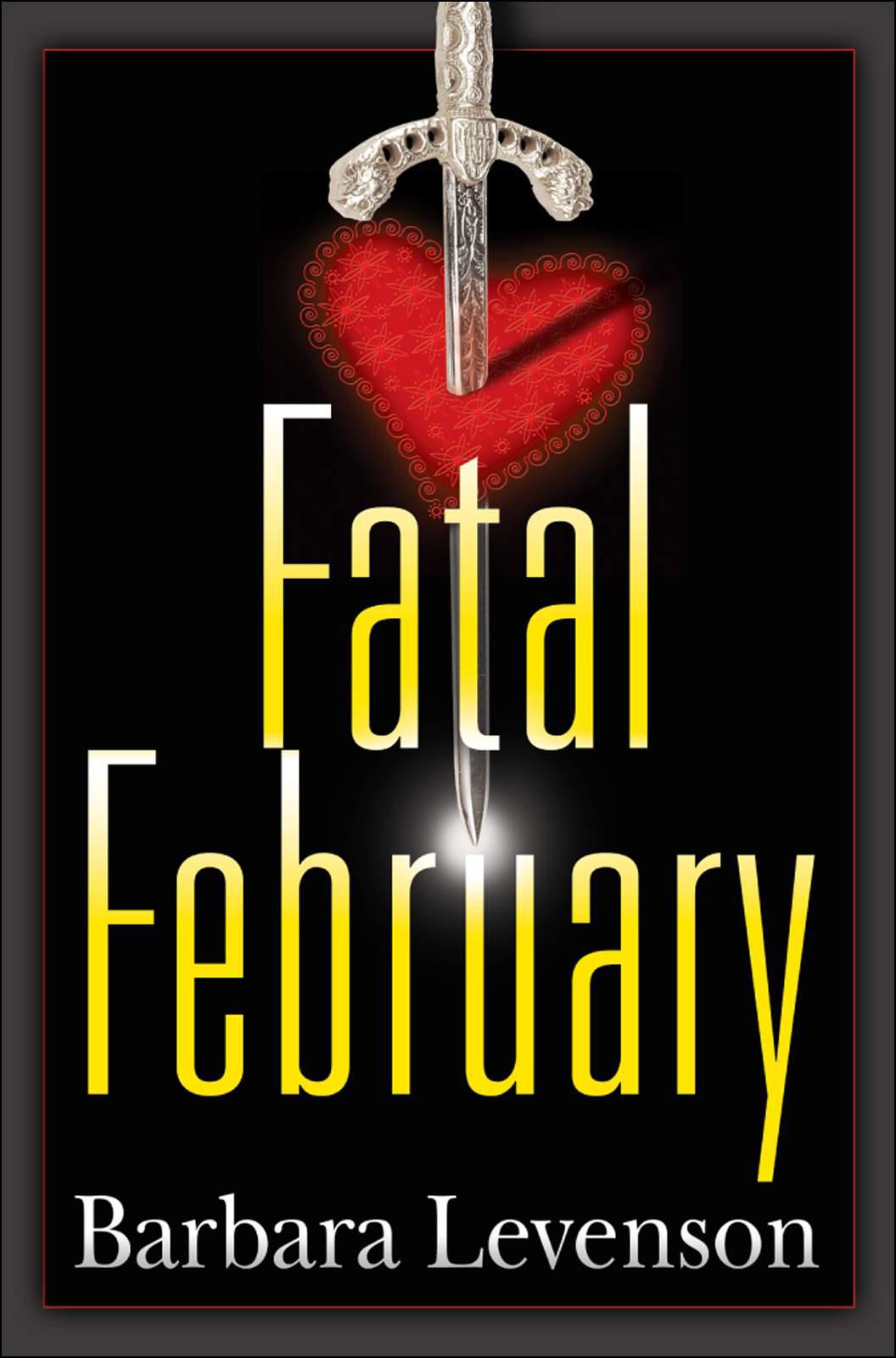 This book is a work of fiction. Names, characters, places, and incidents either are the products of the author’s imagination or are used fictitiously. Any resemblance to actual events or locales or persons, living or dead, is entirely coincidental.

To my husband, Bob Levenson,
without whose love and encouragement,
this book would not have been written.

The places in this book are real while the stories and characters are fictitious.

The criminal justice system in Miami-Dade County, Florida, continues to work against almost insurmountable budget and building restraints. I must acknowledge the background material for this book that comes from working with the courageous judges, attorneys, police, and corrections officers who make the system continue to operate.

I also acknowledge the interesting and diverse people who live and work in the Greater Miami area that has made living here for the past thirty-two years exciting and never boring.

Thanks to Dr. Pat Gussin for her medical input and for her editing and belief in this book and to everyone at Oceanview Publishing.

Last, but certainly not least, to Ned, one of a long line of champion German shepherd dogs from our kennel, who is the model for Sam in this book.

Lillian Yarmouth murdered her husband. She stabbed him with her grandmother’s antique silver letter opener. Right in the heart. At least, that’s what everyone in Miami believed, including the
Miami Herald
, although they used the term “allegedly” several times.

She had just come home from the grocery store and the car wash. She was preparing for her son and daughter to return from college for the winter semester break. The kids hated it when she picked them up in her Lexus SUV and it was covered with dust and the leavings of garden plants.

The Yarmouth’s next door neighbor, Cassie Kahn, was sunning by her pool. She claimed that she saw Lillian drive into her garage around 3 p.m. She noticed this because the car was so shiny. A short time later, she saw a young, blonde woman run down the street screaming. The woman entered a red BMW parked in front of the Hernandez house. Cassie noticed this because she knew the Hernandez’s were in Freeport and she wondered who was at their house.

The neighbors who had gathered on their front lawns in the toney Coconut Grove neighborhood saw the police lead Lillian away in handcuffs.

Last February I went to the car wash, and ruined my life. It was the same car wash that my new client, Lillian Yarmouth, had gone to, right before she was accused of murdering her husband.

My name is Mary Magruder Katz. I live in Coral Gables, a suburb of Miami. I’m a lawyer. My main practice is criminal defense, but at the time of Lillian’s arrest, I was practicing in a fancy multipartner firm and dabbling in civil and corporate work when I was forced to do so.

A trip to the car wash was a regular monthly occurrence. Nothing special. I was on my way home from work. I knew I was overdue to wash my Ford SUV. The dust of winter in Miami clung to her sides and back window. The beauty of the dry season brings hibiscus blooms, golden shower trees, model photo shoots on South Beach, movie star sightings at restaurants, and eternal sunshine. It also brings yellow Sahara dust that blows across the ocean and clings to cars, patio furniture, and windows.

I should have known Wash ’n’ Shine would be
overflowing with dirty cars right before Valentine’s weekend. It’s a big deal in Miami. It coincides with President’s Day weekend, a big tourist time. For the locals, it’s also a time to reap the reward of living in South Florida: perfect weather, fun events, and envy from northern relatives.

The line snaked and shimmied up to the vacuum hoses. I left the SUV in the hands of an attendant who appeared to be drunk, drugged, or mentally ill, as he mumbled to himself in unintelligible whispers. The crowd around the viewing windows was deep; children quarreling over a spot to watch their car get its bath, parents yelling, and people chattering in English, Spanish, and Spanglish.

I edged my way to the waiting room to pay for the wash. Just as I put my money down, a tall guy shoved in front of me waving his credit card.

“Well, I’m in a hurry.” He threw the card at the girl behind the counter.

“Look, sir, I was here first.” I wedged my body closer to the counter, but it was no use. The big guy reached right over my head and grabbed his bill, signed the slip and threw it back over my head to the cashier.

“Just because you know him, doesn’t mean you can be rude to me, miss. And you, Mr. Martin, is that what she called you? Your lack of courtesy is what gives Miami a bad rap.”

I paid my bill and walked outside to the waiting area, a large patio with a coffee bar and loud music, basic amenities everywhere in South Florida

There were dozens of cars in an assembly line of attendants who were drying, polishing, and finishing the “instant” car wash. I found a seat on one of the benches and opened my briefcase. It would be a half hour before I could drive out into the growing traffic on the highway.

Loud voices intruded. I could hear them over the music. I looked up and saw the big guy. He was waving his arms at one of the men.

“I said get my car finished
now
. I’ve told you in English and Spanish. Are you deaf?”

“No, mister, I heard you, but I gotta do these cars in order or I’ll lose my job,” the attendant said.

“Maybe I’ll see that you lose your job anyway.”

The attendant took his load of towels and continued through the line of dripping cars.

Ha
, I thought,
so you found someone you couldn’t bully. Good
.

I looked up from my work when I heard the loudspeaker calling out finished cars.

Only twenty minutes had passed. I was lucky.

I got in my car, readjusted the mirrors, and began to pull slowly out of the drive. I was waiting to enter the traffic flow, when I felt a terrible jolt. My head snapped back. I heard a crunch of metal. Behind me
was the white Corvette. Its front was now accordion pleated. I jumped from my car. The driver of the Corvette was getting out. I hurried to look at my car. The back bumper had a small dent and a scratch. Thank God I had opted for an SUV. When I looked up, I was looking into the face of the same Mr. Martin.

“You again,” I screamed. “What were you thinking? On your cell phone, I suppose. You’re not only rude, you’re a self-centered jerk.”

“I’m sorry. Look, your car is hardly damaged. Mine is the one that’s a mess. I really am sorry.” He pulled a stack of bills from his pocket. “Here’s five hundred bucks. That should more than cover that little dent. My insurance’ll pay for my car, so let’s just forget this whole thing.”

“Oh, no. Who do you think you are? I’m a lawyer, and I know better than to let you walk away from an accident that’s your fault. What if I find I’ve been injured? My head hurts already. I better call the police.”

“Please, don’t do that. I know I was wrong. It’s just that I’ve got a big business deal that I’ve got to get to. Look, here’s my card. If there are other damages, I’ll pay for them. You can call me.”

I looked at the card. Carlos Martin, Developer, Commercial and Residential.

“Yeah, well, half of Miami says they’re in the development business. How do I know that’s even your real name or number? And if you’re going to some big deal, why did you waste time at a car wash?”

“Because I didn’t want to show up in a muddy car from a construction site, not that it’s any of your business. Here, look, here’s my driver’s license. It shows my name. Wait, did you say you’re a lawyer? Are you busy right now? Do you do real estate closings?”

“Even better. Can you come with me to the closing of this deal? Just look over the contract and the closing statement.”

“What? You were rushing off to close a big deal and you don’t even have an attorney?”

“Well, I do, but it’s the long weekend, and he left with his girlfriend on his boat. Something about trying to sell it at the boat show in Miami Beach. He asked me to put this off, but I can’t.”

“It’s in Coral Gables. Not far. Only a few minutes from here.”

“Nothing in Miami is a few minutes on a Friday afternoon. What about my fee? You haven’t even asked what my fee will be.”

“Okay, I’ll write you a check right now for a thousand dollars, and you can charge me whatever else you think is fair after the meeting. And one more thing. I’m pretty sure my car won’t run. It’s really smashed. Can you drive me there?”

Carlos was in the passenger seat of my Explorer before I knew what was happening. His long frame filled the area, even with the seat pushed back. I glanced at him out of the corner of my eye. He was cute, now that he wasn’t having a tantrum. I guessed him to be about my age, mid-thirties.

He caught my glance and smiled at me. The smile changed his face. It made him look like a cross between Ricky Martin and Rocky Rothstein. Rocky was the quarterback on my high school football team. I always was a fan of muscles and Latin charisma.

“I don’t even know your name.” He laughed.

“I think we’ve met before. You look familiar, and I think I recognize your name, too.”

“What a pathetic line. Can’t you come up with something more original?”

“No, wait. I’m not conning you. I saw your name
and picture in the paper. Just the other day, but I don’t remember what it was about.”

“Well, I was in the
Herald
the other day. I represent Lillian Yarmouth. There was a bond hearing, and I was able to get her out of jail. She’s on house arrest with an electronic monitor.”

“She’s the woman who killed her husband? And you got them to release her?” Carlos gave a low whistle of approval or awe. “I’m impressed. And see, I wasn’t giving you a tired old line.”

“Lillian is innocent until proven guilty,” I said. “Nothing makes me boil more than the public convicting someone after reading a squib in the paper.”

I began to think about my first meeting with Lillian. My brother called me the day of Gary’s murder. Both of my brothers are also lawyers. Jonathan practices estate planning, and William does corporate and real estate work. My parents can’t understand why I think their work is boring.

Jonathan was the lawyer Gary Yarmouth hired to do his will. He was the only lawyer Lillian remembered. When her family called Jonathan, he called me.

“I suppose you heard the TV report about Gary Yarmouth’s murder,” Jonathan said.