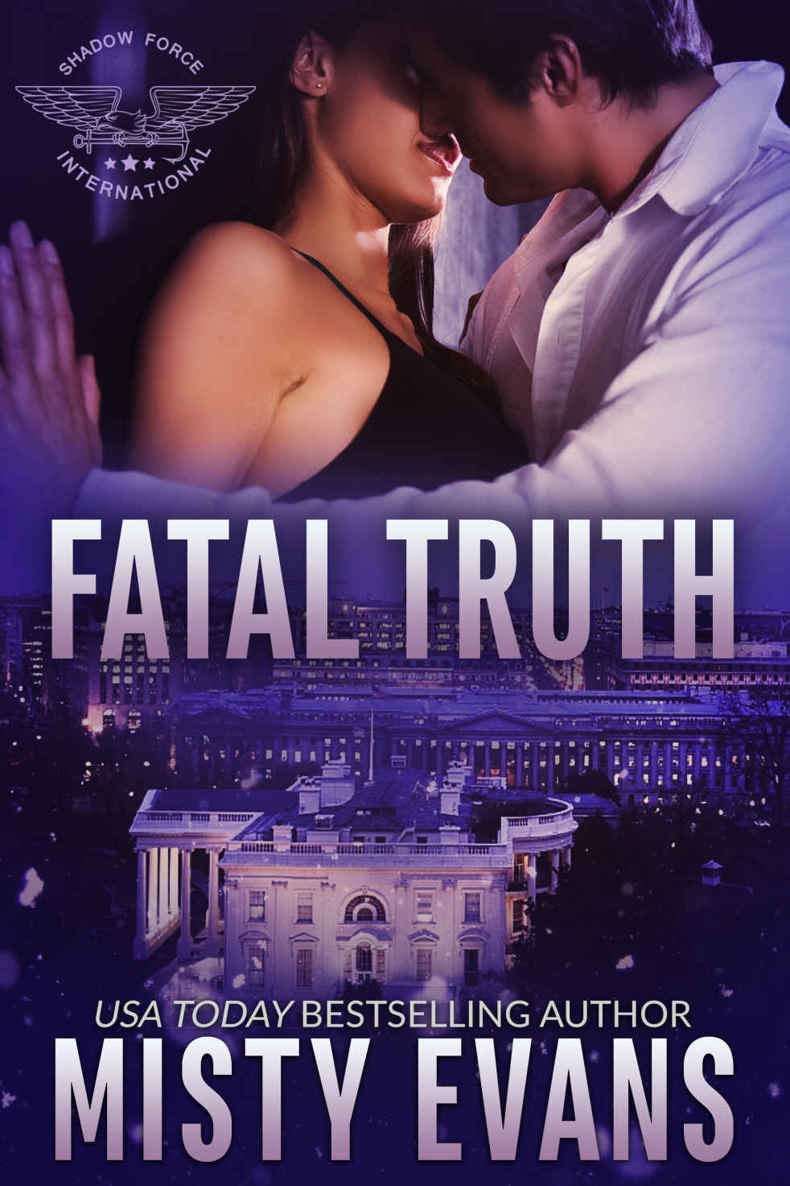 Get Your FREE Short Story!

This is a work of fiction. Names, characters, places, and incidents are either the product of the author’s imagination or used fictitiously, and any resemblance to actual persons, living or dead, business establishments, events or locales is entirely coincidental.

The reverse engineering, uploading, and/or distributing of this eBook via the internet or via any other means without the permission of the copyright owner is illegal and punishable by law. Please purchase only authorized electronic editions, and do not participate in or encourage electronic piracy of copyrighted materials. Your support of the author’s rights is appreciated.

and to all the men and women

Readers of my Deadly-SCVC Taskforce Series keep asking about a spin-off series with Emit, Cal, and Bianca from DEADLY FORCE. Several years ago, I outlined a protection service series with the help of fabulously talented Lori Wilde. Combining the two seemed like a great idea, and that’s how the SFI series was born.

I hope readers who enjoy my other romantic suspense series will also enjoy this one, and I can’t thank those loyal readers, and Ms. Wilde, enough for giving me the inspiration to launch into a new world of intriguing heroes and the heroines who love them.

With most of my books, I ask fans who follow my Facebook page to pick the name of the heroine when I start the story. The same holds true for this series. Thank you to my FB fans for picking the name Savanna…it fit this heroine perfectly.

A group of former SEALs, abandoned by the United States and labeled as rogue operatives, who now work as a black ops team performing private intelligence, security, and paramilitary missions for those who have nowhere else to turn.

“Search for the truth is the noblest occupation of man; its publication is a duty.”

She’s an investigative reporter who lives to uncover the truth.

Feisty television host Savanna Bunkett exposes government cover-ups on her award-winning show,
The Bunk Stops Here
. When she digs into a rumor about a top-secret government project that’s producing “super soldiers” for the president, she suddenly finds herself on an assassin’s hit list.

He’s the man who knows the truth.

Navy SEAL Lieutenant Trace Hunter is the only soldier to survive Project 24. After refusing a direct order from the president, he was branded a traitor, and his career imploded after the sexy reporter turned him into a national headline. He now works undercover for Shadow Force International, a secret group of former SEALs helping those who have nowhere else to turn, using his enhanced skills to fight for justice and protect the innocent. His first assignment? Protect Savanna from the one man who wants them both dead—the president.

One wrong move and they’ll be silenced forever.

Helping Savanna is the last thing Trace wants to do, but her unwavering determination to expose the president’s dark truth matches his own. She’s his one chance to set the record straight, and he’s her only chance at survival. When their mutual enemy closes in, can they put the past behind them and trust each other? Even if it means losing their hearts in the process? Or will secrets, lies, and forbidden passions cost them everything?

N
AVY
SEAL L
IEUTENANT
Trace Hunter stood outside the Witcher prison walls in nothing but his underwear and stared at the gray Virginia skyline.

You wore the same clothes leaving prison that you wore coming in; hence his lack of street clothes.

Eighteen months since he’d been a free man. Since his world crashed down like a Black Hawk hit by a surface-to-air missile.

He drew a deep breath, the cold November air searing a line straight down his throat and into his lungs. Yes sir, the guard hadn’t been lying.

“Brisk out there,” he’d told Trace as he’d handed him a pair of sweatpants and a jacket and ushered him out a rear service door not far from solitary.

The normal guards had been missing, the numerous doors and gates opening for the two of them as if by magic. But Trace was a lifer. He didn’t understand why he was getting out, or why he wasn’t going out the front gate.

Leaving Witcher had never crossed his mind when he’d entered, so he didn’t argue as the guard directed him through the last gate. He did, however, ignore the kindness of the clothes and bugged out as fast as his feet could carry him.

Thanks to his stubbornness, his skin was now pebbling in the frosty air.

Forty yards from the prison, he came to a fork in the road. According to the sign, north lay Rileyville, Population 899. South lay Murder Creek, unincorporated. Either way was a long walk in his skivvies.

Rocks and debris on the road bit into the soles of his feet as he put his head down and headed south. He’d taken off the cheap flip-flops Witcher had provided upon entry and thrown them as far as his arm allowed. He’d survived tougher conditions in hellholes like Afghanistan, Pakistan, and Peru. North Korea had been a ball of laughs, too.

At least those places had been warm.

Who got me out?

Leaving the prison, he’d kept wondering if it was a joke, and that once he finally got to the last gate where the laundry trucks came and went, the normal guards would arrive back at their posts, laugh and tell him to turn the fuck around and go back to solitary.

He’d spent a lot of time there. No way in hell he’d been released early for good behavior.

When he’d asked why he was free to go, the guard with the clothes wouldn’t answer him.

He loved his country. Had done a lot of shit to keep her safe, but there was one thing he’d refused to do and it had cost him his freedom and his reputation. He knew a secret that could destroy the sitting president. Linc Norman’s enemies would give Trace anything he wanted for this tidbit of info.

He wouldn’t give it to them. None of them.

He also wouldn’t follow the last order his commander-in-chief had issued.

So he’d been branded a rogue operative, a traitor. His story—a false one—had been plastered all over the highly-rated
The Bunk Stops Here
and then been picked up by news stations around the world. He’d become the face on dozens of cheap tabloids, usurping the Royals’ latest baby and stealing the limelight from the current Disney star-turned-porn princess, all thanks to Savanna Bunkett, the host of TBSH who’d broken the story on him.

The all-American, girl-next-door Savanna did a three-show segment on his fall from war hero to traitor, crucifying him and calling into question every mission he’d been on, every SEAL who’d worked with him.

Not a lawyer in the country would touch him, and even if one had stepped forward to take on the U.S. Attorney General, they wouldn’t have won. He was a dead man walking. Thanks to some back-door dealing, he didn’t even get a trial; he was sent straight to Witcher, the hidden government installment built especially for high-risk prisoners like him. Prisoners who’d been the best at what they did. Highly-trained operatives and military personal who knew every trick their government had up its sleeve and how to get around all of them.

Behind him, the sound of tires on pavement broke him out of his reverie.

Trace didn’t turn or acknowledge the vehicle’s presence. It was traveling too slowly to be a casual traveler on his way to Murder Creek unless the driver was a blue-hair. Of course, a man his size walking on the side of the road in nothing but his underwear could cause any normal driver to slow so he or she could gawk.

Trace knew the driver wasn’t an old lady or a curious traveler. The person or persons approaching carried danger. Probably someone working for the president or Command & Control. Maybe the person who’d gotten him cut loose from Witcher so they could gun him down on the side of the road.

Hell, the president had already had him in the perfect spot to end him. People inside had tried, but he was better, faster, more deadly than his fellow inmates. He’d sent more than a few of them to the infirmary, knowing they had only come after him because the president had offered them early release if they took him out.

He’d been well-trained for evasive maneuvers. The tree line next to him would make for good cover if he needed it. He could disappear before the driver blinked. Disappear forever and reinvent himself. Go to the Caribbean, meet some sweet native gal and start a new life. Or maybe Italy. He’d always wanted to visit Italy.

Bonus, Italy was one of the few countries where he’d never killed anyone.

The SUV cruised by him, accelerating ten yards out. Cadillac Escalade. Not official government unless the mayor of Virginia was paying a visit.

Maybe it
is
a blue-hair gawker
.

Tinted windows. All-season, heavy duty tires. If he had to guess, he’d say by the sound of those tires on the cold highway, the vehicle was carrying some reinforced side panels.

His gawker was either incredibly rich and paranoid, or Beyoncé had heard he was out and had come to pick him up.

Doesn’t matter who’s in the car. Only matters what I’m going to do about it.

Escape scenarios were limited. There was one road, the road he was walking on, and the trees.

Dragon and the Princess by Jo Beverley
Return to Honor by Brian McClellan
Los bandidos de Internet by Michael Coleman
The Birdcage by John Bowen
Unsafe Haven by Chaffin, Char
The Atlantis World (The Origin Mystery, Book 3) by A.G. Riddle
American Spirit: A Novel by Dan Kennedy
The Death of the Heart by Elizabeth Bowen
Bella Poldark by Winston Graham
The Bootleggers by Kenneth L. Levinson