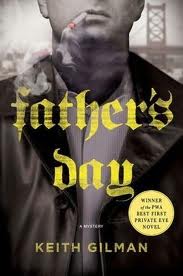 For The Stand-up Guys

My sincerest gratitude to The Private Eye Writers of America and St. Martin’s Press for making this book possible. I’d especially like to thank Ruth Cavin and Toni Plummer for walking me through the process. I’d also like to thank Daniel Judson. He was the first person to read the manuscript and to recognize something special in it. Other writers have also helped me along the way. Reed Coleman, William Lashner and Steve Hamilton are three who continue to offer their support. I’d like to thank my agent, Sam Pinkus. And lastly, I’d like to say a word about just how important my family is to me: my beautiful wife, Lori, my two daughters, Amy and Abby, and my son, Larry. It is within that circle that I am complete.

Charlie Melvyn was about
to close the shop for the day. He’d sprayed the mirrors with ammonia and wiped them with a dry rag. He’d swept the loose hair from the floor and emptied the trash. There wasn’t much money in the register, but his habit was to count the dwindling daily receipts and stack the bills neatly into a floor safe in the office.

Charlie’s shop had been there for as long as anyone could remember, sandwiched between a dry cleaner and a beer distributor. The nail salon across the street had closed about a month ago, the hardware store a month before that. There was a bail bonds office on the block, but there never seemed to be anyone in there. He’d see people in and out of Preno’s Butcher Shop, old ladies usually, with a few thin packages of sliced ham or turkey and a quarter pound of provolone cheese. The liquor store at the corner was making money. The beer distributor was running a close second. And if they weren’t getting robbed once a month, they both might still be around next year.

Charlie would still be around. Nobody doubted that. He’d
still be cutting hair and chasing kids off the sidewalk, the children and grandchildren of guys his age and more, old guys who hadn’t left the neighborhood through three generations, friends who’d been slowly disappearing from his life. They’d been dropping like flies lately. Another few years and they’d all be dead.

He’d known three of the people who died in the fire at the Florence Apartments. He’d walked by the place every morning on his way to work. He’d wave to Mrs. Wheeler as she leaned on the railing of her fifth-floor balcony in a paper-thin house-coat, lighting her first cigarette of the day.

He’d stop and shake hands with Angelo Baldini, who’d sit on the bench in front of the Florence feeding stale bread to the pigeons in the warm morning sun, the birds marching around on the sidewalk, their heads bobbing like soldiers who’d lost their sense of direction. Angelo would smoke cigarettes and throw the butts into the gutter. The pigeons would flock toward the rolling cigarettes as if they were pieces of bread and then turn away with a nose full of smoke. Once in a while, a brave pigeon would pick up a smoldering cigarette and strut around with it in his mouth like Groucho Marx with his cigar.

Since the fire, all the windows and doors of the Florence Apartments had been boarded up with sheets of new plywood. The smell of smoke lingered.

What Charlie missed most was the row of chairs he’d kept in the shop like church pews against the wall where the old guys would argue about the Phillies’ chances in the playoffs and the price of gas. The chairs had gone empty, one by one, until he folded them all up and carried them into the basement. Charlie had been a barber for most of his life, and his shop had become more than a place to go for a haircut. It was a place where the soul of the neighborhood lived out its last remaining days.

The young boys, the little sharks he’d call them, would come through the door in packs, their pockets filled with
wrinkled dollar bills and an assortment of loose change. They’d drop the money on the counter and run around the shop until it was their turn in the chair. Then, they’d sit perfectly still as if they were strapped into the electric chair, beg him to leave it long, give them a short little ponytail in the back and twist it into a braid like they’d seen on the bad-boys in the movies.

The cops wore their hair short like they’d just got out of the army. A cop wouldn’t wear his hair down around his shoulders, unless he was undercover. He could be as bad as the guy he was supposed to arrest or worse. Cops used to walk the beat past the barber shop every day, before they had enough patrol cars to go around. Some would even stop in for a haircut. They’d worn those silly blue hats that would fly off their heads and roll like a hubcap in a stiff wind. There was nothing funnier than watching a rookie cop, a fresh-faced kid right out of the academy, chasing his hat down the street, listening to the blaring horns and screeching tires as he dodged between moving cars. The kids would laugh and punch each other in the arm. They’d laugh like their dads did on a Saturday night with a few beers in them and the hockey game on the TV.

They’d inevitably come back to Charlie’s for a little trim, their mothers tugging them by the ears, demanding a little more off the back. Their mothers smoked cigarettes and chewed gum while they watched Charlie work, cursing the priests at St. Lucy’s for having to spend the lousy seven bucks it cost them for the haircut, thinking what was wrong with a little ponytail. It was like the scar on Scarface, they thought. It gave them character.

Charlie still held the broom in his hand when the front door opened.

“Got time for one more, Chahlie?”

His face suddenly brightened, his tired eyes looking up at the familiar face in the doorway.

“I wasn’t sure you’d recognize me.”

“Cut your hair since you were, what, ten years old? It’s been a long time, Louis, but not that long.”

He clasped a hand on Lou’s shoulder, felt good strong muscle under the soft leather jacket, and ushered him into a barber’s chair. The red vinyl and chrome shined like new alongside the reflection of the two men suspended in the mirror, the empty shop behind them.

“You haven’t changed a bit, Chahlie.”

“A little older, a little wiser. I’m still alive. What more can I ask?”

Charlie draped a plastic cover over Lou’s shoulders with the dramatic flair of a magician. With a comb in his left hand and a pair of scissors in his right, Charlie began to trim the thick, coarse hair on the side of Lou’s head. His fingers were gnarled and arthritic, yet the blades made a metallic flutter like the wings of a bird springing from his hand. Lou tensed at the sound. His dark hair, flecked with gray, floated to the ground.

“Lou, I want you to know how sorry I am about your mom. I never had the chance to tell you. She was a good person. She didn’t deserve what happened to her.”

“They never caught the guy?”

“This neighborhood, it ain’t the same. It ain’t fit to live in no more. This kind of thing, it happens every day now. There’s no stopping it.”

“I told her that, Chahlie. You don’t know how many times. She just wouldn’t leave. It didn’t matter to her.”

“I know. My son, he tells me the same thing. I don’t know
why I stay. I keep hoping that it’s going to get better, but it just gets worse. I been held up twice.”

“You’re probably right. And now we got this guy running loose, killing girls. They found the last one in Fairmont Park. What have you heard about that, Lou? They close to catching the guy?”

“We never had noth’in like that in the old days. What he does to them. It’s disgusting!”

Charlie snapped open a straight razor from the counter, filled his hand with warm shaving cream. He spread it over the back of Lou’s neck. The sharp blade glided over his skin. When he was done, he rubbed in a light tonic. The alcohol stung, burned cold against Lou’s neck.

“That’s the closest shave I’ve had in a long time.”

Lou stood up and looked at himself in the mirror, at the deep ridges in his face, the close cropped hair, the long thin nose, a boy’s brown eyes buried beneath thin eyebrows and dark sagging circles. He tried to smile and couldn’t.

“I heard you were back in your mom’s house. I drove past it a couple times. It would have been a shame to leave it shut up like that, empty.”

“Most people are moving out, Lou. Not moving in.”

“I know. I was thinking of selling. I’d never get what it’s worth but it’s really not worth much anyway.”

“It wasn’t worth anything, the way it was.”

There was an uncomfortable moment of silence between them. Lou brushed the hair off his pants, and reaching farther
down, he brushed the dust off his shoes. The fan in the corner hummed winter and summer, blowing stale air around the shop, where Phillies pennants from the last twenty years were hanging from the ceiling, waving like heavy summer leaves.

He’d had second thoughts since the moment he fit the key into the padlock and pulled open the front door. The wood had warped and the door stuck for a stubborn second, the rusty hinges groaning as it had come stiffly open. He’d seen a spider scatter deep into its web.

The air inside was stale, maybe a little sour, like the laundry room in the apartment house he’d been living in for the past year. A hazy light had seeped through the cracks in the closed blinds. The hardwood floors were bare and dry. The plaster walls and ceiling were cracked. The electricity was off. The water was off. There hadn’t been a stitch of furniture in the place. He’d had it all removed to Public Storage and wasn’t sure if he’d be bringing it all back.

Extraordinary Losers 2 by Jessica Alejandro
The Heartbroker by Kate O'Keeffe
iBoy by Brooks, Kevin
A Sweet & Merry Christmas by MariaLisa deMora
The Hook by Raffaella Barker
Callahan's Place 10 - Off The Wall At Callahan's (v5.0) by Spider Robinson
Valour by John Gwynne
Young Bloods by Scarrow, Simon
Touch of Heaven by Maureen Smith
Endfall by Colin Ososki