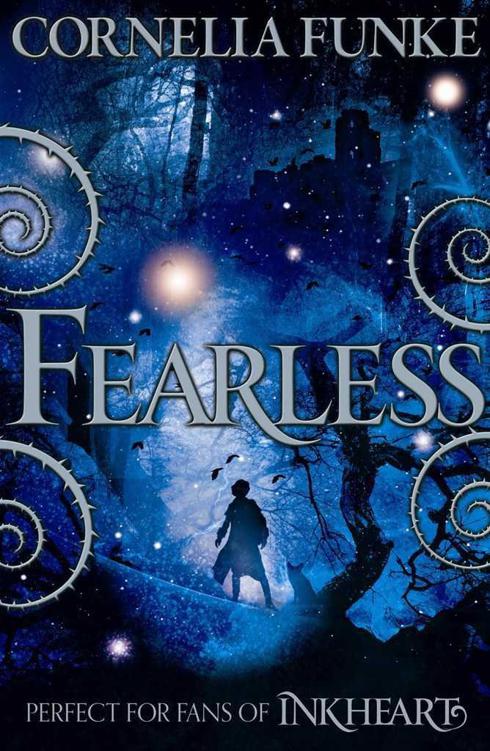 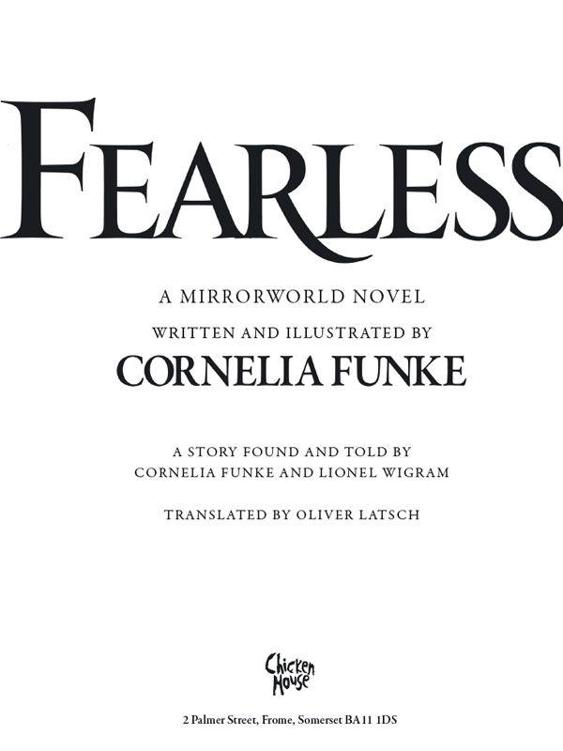 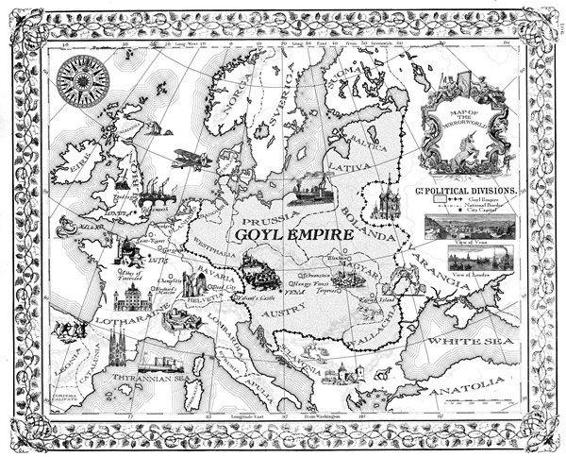 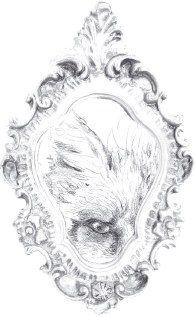 ‘I won’t stay long.’
Fox wiped the rain off her face. With Jacob, this could mean anything. Sometimes he stayed for weeks. Sometimes months.

The ruin lay deserted as usual, and the silence between the scorched walls made her shiver nearly as much as the rain. The human skin warmed so much less, yet Fox now shifted into the vixen ever more rarely. All too clearly she had begun to feel how the fur stole the years from her – even without Jacob reminding her.

He’d held her so close before he left, as if he wanted to take her warmth with him into the world where he was born. Something was frightening him, though he didn’t admit it, of course. He was still like a boy who thought he could outrun his own shadow.

They’d been way up in the north, in Sveriga and Norga, where even now the forests were still buried in thick snow and where hunger drove the wolves into the towns. Before that they’d travelled so far south that the vixen still found desert sand in her fur. Thousands of miles . . . cities and countries she’d never heard of before, and all supposedly to find an hourglass. But Fox knew Jacob too well to believe that.

At her feet, the first wild primroses were springing up between the shattered flagstones. She snapped off one of the delicate stalks, and the dew rolling off the flowers was still cold. It had been a long winter, and Fox could feel the past months like frost on her skin. So much had happened since the previous summer. All that fear for Jacob’s brother . . . and for Jacob. Too much fear. Too much love. Too much of everything.

She tucked the pale yellow flower into her lapel. Hands . . . they made up for the chilly skin her human body came in. Whenever she wore her fur, Fox missed reading the world with her fingers.

With a quick movement, she grabbed a Thumbling who’d pushed his tiny hand into her jacket pocket. He only let go of the gold coin after she shook him as hard as the vixen would a captured mouse. The little thief bit at her fingers before he dashed off, muttering insults. Jacob always tucked a few coins into her pockets before he left. He hadn’t adjusted to the fact that she now managed quite well in the human world – even without him.

What was he afraid of?

Fox had asked him, after they’d ridden for days from one wretched village to the next, only to end up standing beneath some dead sultan’s dried-up pomegranate tree. She’d asked him again, when Jacob had got himself drunk three nights in a row after they’d found an overgrown garden with nothing but a dried-up well in it. ‘It’s nothing. Don’t worry.’ A kiss on the cheek and that careless smile she’d been able to see right through since she was twelve. ‘It’s nothing . . .’

She knew that he missed his brother, but this was something else. Fox looked up at the tower. The charred stones seemed to whisper a name. Clara. Was that it?

Her heart still tightened whenever she thought of the brook and the two dead larks. Jacob’s hand in Clara’s hair, his mouth on her mouth. So ravenous.

Maybe that was why she’d nearly gone with him – for the first time. She’d even followed Jacob up into the tower, but in front of that mirror her courage had deserted her. Its glass seemed to her like dark ice that would freeze her heart.

Fox turned her back to the tower.

Jacob was going to come back.

He always came back. 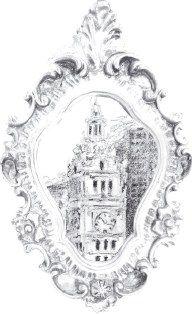 T
he auction room was on the thirtieth floor. Wood-panelled walls, a dozen rows of chairs, and a man by the door, who ticked Jacob’s name off a list with an absent-minded smile. Jacob took the catalogue the man offered him and went to stand by one of the windows. A thick forest of towers; beyond them, like watery mirrors, the Great Lakes. He’d only arrived in Chicago from New York that morning, a distance that would have taken a week by stagecoach. Beneath him, the sunlight glinted from countless glass walls and gilded roofs. When it came to beauty, this world could easily compete with the one behind the mirror, and yet Jacob felt homesick.

He sat down on one of the chairs and surveyed the faces around him. Many were familiar: antique dealers, museum curators, art collectors. Like him, they were all treasure hunters, even though the treasures of this world possessed no magic beyond their age and beauty.

The bottle, which Jacob had tracked all the way to this room, was listed in the auction catalogue between a Chinese Emperor’s teapot and the silver rattle of an English King’s son. The bottle looked so innocuous that hopefully it wouldn’t attract any other bidders. Its dark glass was protected by a much-handled sheath of leather, and the neck was sealed with wax.

BOTTLE OF SCANDINAVIAN ORIGIN, EARLY 13TH CENTURY
, read the caption beneath the picture. Exactly the description Jacob had given when he sold the bottle to an antique dealer in London. Back then he’d thought it an amusing move to render its inhabitant harmless that way. On the other side of the mirror, releasing him would have been deadly, but in this world he was as harmless as bottled air, a bubble of nothing behind brown glass.

The bottle had changed owners several times since Jacob had sold it. It had taken him nearly a month to trace it – time he didn’t have. The All-Healing Apple, the Well of Eternal Youth . . . he’d already wasted many months searching for the wrong objects. And death was still embedded in his chest. Time to try a more dangerous remedy.

The moth above his heart was growing darker every day: the seal on the death warrant issued by the Dark Fairy for uttering her name. Her sister had whispered that name to Jacob between two kisses. No man was ever executed more tenderly. Betrayed love. The black moth’s blood-red outline was a reminder of the crime he was actually dying for.

A dealer to whom he’d sold a carafe of elven glass many years ago smiled at him from the first row. (She’d taken it for Persian crystal.) Jacob used to bring many objects through the mirror, to pay for Will’s schooling or his mother’s medical bills. Of course, none of his clients had ever suspected that he sold them objects from another world.

Jacob glanced at his watch and looked impatiently at the auctioneer.
Get on with it!
Lost time. He didn’t even know how much he had left. Half a year, maybe less . . .

The Emperor’s teapot fetched a ridiculously high price, but, just as he’d expected, the bottle didn’t arouse much excitement as it was placed on the auctioneer’s table. Jacob was certain he’d be the only bidder, when suddenly another hand rose a few rows behind him.

The other bidder had the delicate build of a child. The diamonds on his short fingers were certainly worth more than all the items in the auction combined. His short hair was as black as a raven’s feathers, but he had the face of an old man. And the smile he gave Jacob seemed to know a little too much.

Atlantis in Peril by T. A. Barron
The Commander's Desire by Green, Jennette
Remem-Bear Me by Terry Bolryder
Taking the Bait by C. M. Steele
The Advocate (The Advocate Series) by Teresa Burrell
The Rose and the Dagger (The Wrath and the Dawn) by Renée Ahdieh
Veil - 02 - The Hammer of God by Reginald Cook
Dead South (A Bryson Wilde Thriller / Read in Any Order) by R.J. Jagger
The Sweetest Revenge by Dawn Halliday
American Titan: Searching for John Wayne by Marc Eliot