Read Fearless in Tibet: The Life of the Mystic Terton Sogyal Online

Fearless in Tibet: The Life of the Mystic Terton Sogyal 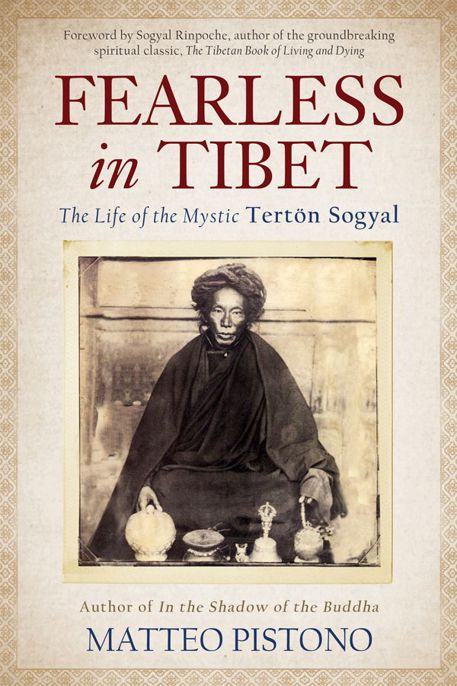 Praise for
Fearless in Tibet

“The life of Tertön Sogyal offers an epic tale of great spiritual practice. Fascinating to read, the story shares many key teachings as well.
Fearless in Tibet
is a gem for anyone interested in Tibetan Buddhist practice and culture.”

“Fifteen years in the making, Matteo Pistono has written a lyrical biography of Tertön Sogyal (1856–1926), the most powerful tantric master of his era. Pistono’s gracefully written stories are evocative and magically playful, but his rendition of Tertön Sogyal’s journey is also critical to understanding the fate of Tibet. As a dakini named Tsephei warned the master in 1915, ‘If China and Tibet fight in the future, everyone will lose, but in the end Tibet will succumb.’ This is now the living tragedy of our Tibet.”

“Tertön Sogyal exemplified the mastery of Buddha Dharma and the yogic conduct of a mahasiddha. Biographies of the great, authentic masters of Buddha Dharma are an integral part of the study and practice of Buddhism. They serve as true inspiration for practitioners and motivate all to strive continuously on the path of practice. This wonderful biography will be of great benefit and inspiration not only for practitioners of Tibetan Buddhism but also for anyone with sincere interest in discovering the depth of Buddhist insight.”

“Fearless in Tibet
is filled with stories and poetry centering around the most profound topics in our human civilization. And what’s more—it’s a remarkably good read. A unique spiritual biography and a must for all followers of Padmasambhava’s teachings.”

— Erik Pema Kunsang, author of
Wellsprings of the Great Perfection

Praise for Matteo Pistono’s
In the Shadow of the Buddha

This story of Matteo Pistono’s quest to visit places in Tibet associated with Tertön Sogyal, the adept who was a companion of the Thirteenth Dalai Lama, is revealing not only of the Tertön Sogal’s life but also of circumstances in contemporary Tibet.

— His Holiness the Dalai Lama

In the Shadow of the Buddha:
One Man’s Journey of Discovery in Tibet

All rights reserved. No part of this book may be reproduced by any mechanical, photographic, or electronic process, or in the form of a phonographic recording; nor may it be stored in a retrieval system, transmitted, or otherwise be copied for public or private use—other than for “fair use” as brief quotations embodied in articles and reviews—without prior written permission of the publisher.

The author of this book does not dispense medical advice or prescribe the use of any technique as a form of treatment for physical, emotional, or medical problems without the advice of a physician, either directly or indirectly. The intent of the author is only to offer information of a general nature to help you in your quest for emotional and spiritual well-being. In the event you use any of the information in this book for yourself, the author and the publisher assume no responsibility for your actions.

Chapter 1: Born into a Rough Region

Chapter 3: Scolding from the Protectress

Chapter 4: The Buddha from Nyarong

Chapter 5: Training with the Masters

Chapter 10: The Guru Returns to Lhasa

Chapter 11: The Razor of the Innermost Essence

Chapter 15: Never Give Up

Chapter 19: The Source of Blessing

It was just over 50 years ago that the world suddenly became aware of Tibet and its culture, when His Holiness the Dalai Lama and a hundred thousand Tibetan people fled into exile, escaping the destruction in our homeland. Since that time, people in the wider world have discovered our extraordinary living tradition of Tibetan Buddhism, which has prevailed for more than a thousand years in Tibet and the Himalayan regions and has often been called one of the last ancient wisdom cultures on earth. With its remarkable knowledge of the mind and its profound disciplines of study and practice, the Buddhist tradition of Tibet produced countless outstanding masters and spiritually realized practitioners. One of these was Tertön Sogyal, or Lerab Lingpa, an exceptional figure who lived more than a century ago during the lifetime of the Thirteenth Dalai Lama.

As I write these words, I can see the sun gleaming on the copper roof of the temple here at Lerab Ling, the retreat center in France that I founded in the name of Tertön Sogyal. Thinking about him now, I realize that he was someone whose life embraced many different facets and dimensions. To begin with, you could say that he was a spiritual leader, deeply concerned with the future well-being of the world and its inhabitants, as well as with the spiritual progress of humanity. From the perspective of the ancient Nyingma tradition of Tibetan Buddhism, he stood out as a great master, mystic, visionary, and prophet, and a
tertön
, or treasure revealer, with more than 20 large volumes of revelations to his name. From the viewpoint of the historian, he was a teacher, friend, and ally of the Thirteenth Dalai Lama (1876–1933) and a defender of the realm, who, through his revelations, prophecies, and spiritual presence, played a crucial part in striving to ensure the survival of Tibet as a sanctuary for the study and practice of Vajrayana Buddhism.

To understand what drove and inspired Tertön Sogyal, we ought to step back for a moment into the eighth century, a time when the Buddhist teachings were established in Tibet by the extraordinary master Guru Padmasambhava, affectionately called “Guru Rinpoche,” meaning “Precious Master,” by the Tibetan people. Along with the great Indian abbot Shantarakshita and the King of Tibet Trisong Detsen, he presided over the construction of the first temple at Samye, the ordination of the first seven Tibetan monks, and the translation of the Buddhist teachings into Tibetan. To his closest 25 disciples, who included his consort, Yeshe Tsogyal, and King Trisong Detsen, he transmitted the innermost secret mantra teachings of Vajrayana, and then, blessing the whole land of Tibet and the Himalayas, he concealed countless spiritual treasures, or
terma
, destined to be discovered by successive incarnations of his chief disciples at precisely the most potent time in the future for them to be of maximum benefit. These treasures can take the form of statues, sacred objects and texts, or teachings revealed from within the minds of the treasure revealers. Once deciphered, they bring to light entire cycles of spiritual practice and teaching. One of these close disciples of Guru Rinpoche was Nanam Dorje Dudjom, a trusted minister of the king and an accomplished practitioner, who had been one of the original delegation sent to invite Padmasambhava to Tibet. Tertön Sogyal, or to give him his name as a tertön, Lerab Lingpa, was the incarnation of Nanam Dorje Dudjom.

I believe I must have first heard about Tertön Sogyal from my own beloved master, Jamyang Khyentse Chökyi Lodrö, who raised me as his son, gave me the name “Sogyal,” and recognized me as an incarnation of Lerab Lingpa. This was because Jamyang Khyentse was one of the “heart sons,” the closest disciples, of Tertön Sogyal. He used to say that, before he had even seen the great tertön, the very first time he heard his name, he was overcome by an uncanny sense of yearning, a spontaneous surge of devotion. He met him a number of times, the first occasion being in 1920, and was struck by Tertön Sogyal’s incredible qualities of learning and realization. Tertön Sogyal authorized Jamyang Khyentse to be the holder of all his treasure teachings, and he would appear to him in vivid dreams and visions.

After Jamyang Khyentse passed away in exile in Sikkim in 1959, I continued to study with other great masters of the tradition, and I learned more about Tertön Sogyal. I also heard stories about him as I grew up among my family, the Lakartshang, who had been one of the most generous benefactors of Buddhism in Tibet, sponsoring the monasteries and masters of all traditions. As time went by, I became increasingly aware of and inspired by Tertön Sogyal’s revelations, so much so that they became the cornerstone of my life, my practice, and my teachings.