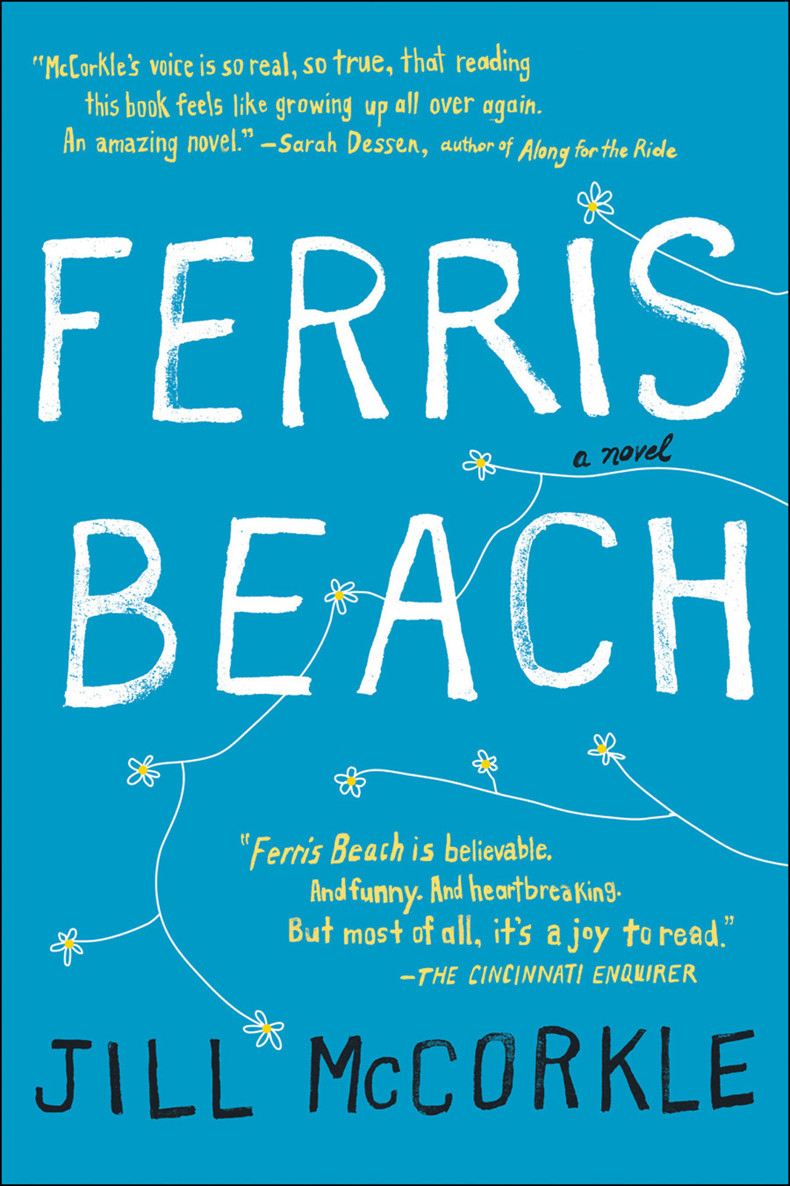 “A really fine read . . . Jill McCorkle is a writer who has delivered on her earlier promise—and who promises still more.”

“McCorkle hits all the right notes.”—
The Atlanta Journal-Constitution

“McCorkle gets all the details right . . . She has written the kind of story that makes you smile with recognition even as it tries to break your heart.”

“A mature novel, full of complexity and compassion.”

“Believable and well rendered . . . Illuminate[s] both the sadness and the possibilities of renewal in relationships.”

“McCorkle writes with such insight into her characters that
Ferris Beach
is as personal as a letter and as visual as photos . . . Her skill at gently balancing humor and grief is masterful.”

“A thoroughly believable picture of growing up in a middle-class small-town family in the New South, in the 60s and 70s, after the throes of integration . . . As convincing as though she’d been lifting the story from her own teenage diary. The teenaged Kate Burns of
Ferris Beach
is a wistfully charming character.”

“A many-layered and often mesmerizing novel.”

“McCorkle is a splendid writer . . .
Ferris Beach
is
believable.
And funny. And heartbreaking. But most of all, it’s a joy to read.”

“McCorkle is a master . . . The charm of her vision stays with you long after the book is done.”

“A beautiful and accomplished novel.”

“With an unerring sense of pacing . . . McCorkle unfolds her story slowly but powerfully, and by the end, with profound —and earned—emotion . . .
Ferris Beach
is a near-perfect example of a balanced story, with characters drawn from life and not from caricature.”

“Endearing, evocative . . . Her writing is marked by a relentless curiosity and clear-eyed bluntness.”

“A marvelously readable novel . . . Its characters are so real that we miss them when the last page has been turned.”

“McCorkle’s writing shines . . . Her characters are finely drawn, funny, and right. Katie, the confused non-belle, rings true, and her story is as compelling as a soft southern night.”

“McCorkle is a strong character writer; she creates people who slip off the page into your memory when you’re not looking.”

“McCorkle’s fiction is full of wonderful ‘characters’ . . . Jill McCorkle’s little
Bildungsroman
of a woman of the New South is well worth reading.”

“What’s delicious about
Ferris Beach
is Katie’s funny, sad and even frightening discovery of complex truths about people and herself . . . McCorkle captures what’s unsaid, what her richly drawn characters feel, the emotional currents that tell them when something’s wrong or convince them that something’s perfect.”

In celebration of Claudia and Rob

Our neighborhood was never the same after Misty Rhodes and her family moved in across the street. While my mother and our neighbor, Mrs. Theresa Poole, mourned the loss of the farmland and the barns and sheds dating back to the 1800s, I rejoiced in finally having the chance of someone my own age close by. The days of blindfolding myself and wandering around my room in Helen Keller simulation, spelling words into my own hand as I acted out Annie Sullivan’s role as well as Helen’s, were drawing to a close. Instead I perched by the window, watching as moving van after moving van came down our street.

Our own house was built in the early 1800s, and my mother had gone to great lengths to learn its history. “There was a time when there was not another house within ten miles of this one,” a state historian had told her when he came to photograph our house and list it on the state historical register. He gave her a lot of information which she carefully typed on heavy bond paper and filed away with all of her other historical information. My mother had grown up in Boston, and didn’t live in the South until she was sent to a girls’ school in Virginia. She had many papers, like pedigrees, that told of various ancestors. The sharp edges of her accent had been filed down over the years, slowed and softened; they appeared only occasionally when she talked about raking the
yard
or playing
cards
or how life was
hard.

“You, Mary Katherine, have the best of both worlds,” she told me the day we were pulling together all of the paperwork necessary for my joining the Children of the Confederacy. I was not thrilled over joining a club, but it was one of those times when it was just easier to go along with her. She had relatives who had served on both sides, so finding the name of the necessary ancestor was as easy as flipping open one of her books. I think her greatest ambition was that I, too, spend my summer mornings at little meetings where I had to dress as if it were Easter Sunday.

She fanned out brochures on historical organizations and showed me her collection of various pins and certificates, essays she had written in school, lectures she had given while teaching school, all the while ignoring my father’s comments on
his
lineage, which he said was composed of Scotch, Irish, Polish, and whatever else
took root
down in South Carolina. He had grown up in a small town the other side of Ferris Beach.

“You’re half Scotch and half soda,” he said, and raised his glass. My mother didn’t even glance up from her yellowed certificates, her broad bony shoulders bent slightly as she smoothed her fingers
over some document or the Formica tabletop. Sometimes she ignored him completely, unclipping and retwisting her thick hair and humming over his voice. Once dark, her hair was almost completely gray and the severe pull of her bun made her look older than she was.

My parents never looked like they went together to me, even in the wedding photo that was permanently placed on our living room mantel. I expected the real spouses to step in from the wings on either side. My dad was a lean man, always with a cigarette between his thin fingers, his gestures quick and animated as he moved through the house, forever pacing. Though most of his time was spent teaching math at the local community college, he had great ambitions of writing the perfect murder mystery, one with a plot that had to be solved mathematically. It was not unusual for him to suddenly jump up and run to write down a series of numbers while my mother shook her head and looked up at the ceiling. My mother was tall and big-boned, usually the tallest woman in the room but never settling for flat shoes. For every animated move my father had, she had composure and reserve; the only time my mother lost her calm control were those times my cousin Angela showed up at our house and my father escaped behind the closed living-room door or out into the darkness of the porch to have talks with her, conversations that were not repeated or explained.

Really, all I knew of Angela was what he had told me, that his sister, unmarried and only seventeen, had a complicated delivery and died soon after, that his mother had raised the baby and as a result he felt Angela was more like his little sister or even his own child. I had no memories of my grandmother, but he spoke of her so often that I saw her in a magical sort of way, this little white-haired lady whose husband had run a shrimping boat, her face and hands a weathered brown from hot days spent surf fishing or shaking the sand from white sheets she hung on a line. When I imagined myself being lifted from the world like the Little Match
Girl, she was the one who came for me. My father said that she was a brilliant lady, a poet’s soul buried in a tough little shell; my mother described her as a poor sad woman who lost her mind.