Fifth Ave 02.5 - From Manhattan With Love 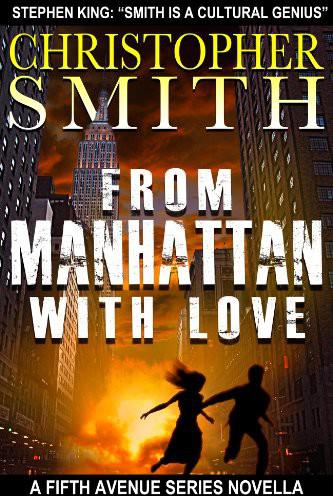 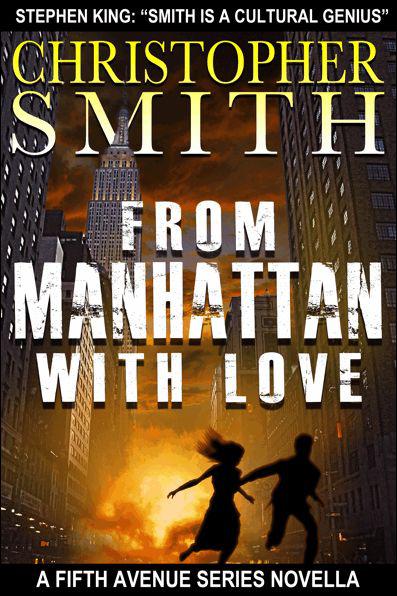 From Manhattan with Love

“From Manhattan with Love” can easily be enjoyed as a stand-alone novella.

An international assassin questions her sanity when she falls in love with the very assassin she’s charged to assassinate.

In this taut, 35,000-word novella, which is a prequel to the upcoming third novel in the Fifth Avenue series, “Park Avenue,” both women collide for the first time in an explosive story that threatens each of their lives, particularly when one woman breaks her own rules and dares to fall in love.

In “From Manhattan with Love,” she soon learns what she always feared.

When it comes to real danger, there’s nothing more dangerous than love itself.

From Manhattan with Love

Carmen in “Running of the Bulls”

Other Books by Christopher Smith

FROM MANHATTAN WITH LOVE

Carmen Gragera stabbed the heart of her steak with a knife and looked across the table at the man she was hired to assassinate.

They were having dinner at an out-of-the-way restaurant on the Upper East Side not far from the Park and as she watched him eat, she wasn’t thinking how she would kill him, but if she could kill him.

The contract she agreed upon was specific:

Make it quick but don’t make it clean.

The press tended to pay little attention to a clean murder.

What they wanted was something messy and salacious, particularly when they were dealing with a man as infamous to the FBI as Williams was.

When she was finished with him, she was to take a cab to LaGuardia and fly back to Paris on the red eye.

If she came through with the kill, the remaining half of her payment would be wired to her account by morning.

Nine o’clock was ninety minutes away.

Carmen looked down at her steak, which was so rare, a pool of brownish-red juices had formed around it.

She picked at it while weighing her options, of which there were two.

She could kill him.

Five million dollars was a lot to leave on the table simply because she’d broken her own rules and made the mistake of falling for him.

Or, she could let him go and say that when she went to take him down, he escaped.

They’d be furious with her, but since they knew what he was capable of, there was no reason for them to question her.

The trouble with this scenario is that she’d never work for them again, which would hurt her financially because they hired her often and they paid her well.

But even worse than this is what she knew they’d do.

They’d bypass her and hire someone else to kill him.

It was a no-win situation.

He reached for his glass of wine and looked up at her.

“What are you thinking about?” he said.

“It’s our last night together.

You’ve got to eat something.

The food they’re going to serve you on the plane will be shit compared to this.”

He screwed up his face at her.

It might be a few months or a few years, but it’ll happen.”

Could he read her mind?

“And what happened last night doesn’t have to be the last time.

Alex Williams was thirty-eight, former Marine, stood six-foot-two, had a thick head of dark wavy hair and was as masculine as they came.

Like her, he was a stone killer, an international assassin she considered among the best and the brightest.

Over the years, they had joined forces on several jobs, but this last one was their best, most challenging collaboration because of the high degree of difficulty involved in pulling it off.

Against formidable odds, they’d taken out the head of a major corporation, which was tricky because the man was a paranoid billionaire who had round-the-clock security.

Getting through them and to their target had taken six weeks of patience and planning.

But last night they got him and today their work was national news.

Trouble is, yesterday they also did something else.

For the first time since they’d known each other, they made love, which Carmen now regretted.

She never crossed that line with her colleagues.

But when Alex came out of his bedroom with a bottle of wine to celebrate their kill, they drank it on empty stomachs and gave into the sexual tension that always had been between them.

“I think we made a mistake yesterday,” she said.

He cut off a piece of his own steak and popped it in his mouth while looking at her.

“Sex screws everything up.”

“It doesn’t have to.

We’d be lying if we said there wasn’t a mutual attraction between us.

There always has been.

“I never get involved with anyone I work with.”

“I guess you can’t say that anymore.”

“I prefer the occasional one-night stand.”

It sounded like a lie when she said it and he caught it.

The truth was that she rarely had sex.

She couldn’t remember how long it had been.

Our jobs take us everywhere.

There’s always the chance that we might not see each other again.”

There’s no reason why we can’t take a few days off to meet up wherever we’re closest, whether it’s here or in some other corner of the world.”

Her hands were in her lap.

She diverted her eyes from him and, while shaking her head at his comment, she casually glanced down at her watch.

She had seventy-five minutes to make a decision.

She wasn’t sure what she should do.

At the table beside them a couple was leaning into the candle light between them.

They were openly arguing in spite of the conversations surrounding them, the clatter of dinner and silverware being removed from tables, the sounds of orders being taken and wine bottles being opened.

They were oblivious to it all.

Bedding The Bad Boy (Dalton Brothers Novels) by DePaul, Virna
Miz Scarlet and the Bewildered Bridegroom by Barton, Sara M.
Romancing Rudy Raindear (Sexy Secret Santas) by Leo, Mary
Uncaged (An MMA Stepbrother Romance) by Kincade, Emilia
Out of Her Comfort Zone by Nicky Penttila
The Ask by Sam Lipsyte
Murder and Mayhem by Rhys Ford
Enduring the Crisis by Kinney, K.D.
Not Me by Michael Lavigne
The Ranch by Danielle Steel