Fight And The Fury (Book 8) 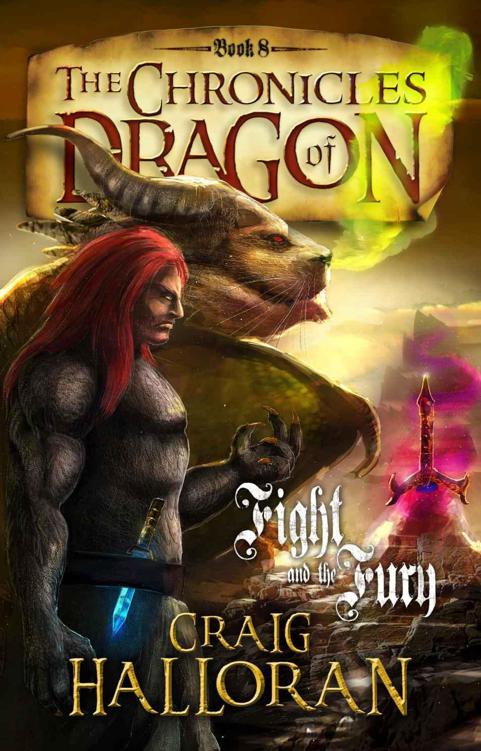 The Chronicles of Dragon: Book 8

The Chronicles of Dragon: Book 8

All rights reserved. No part of this publication may be reproduced, stored in a retrieval system or transmitted, in any form, or by any means, electronic, mechanical, recorded, photocopied, or otherwise, without the prior permission of the copyright owner, except by a reviewer who may quote brief passages in a review.

This book is a work of fiction. Names, characters, places, and incidents either are the product of the author’s imagination or are used fictitiously, and any resemblance to actual persons, living or dead, events, or locales is entirely coincidental. 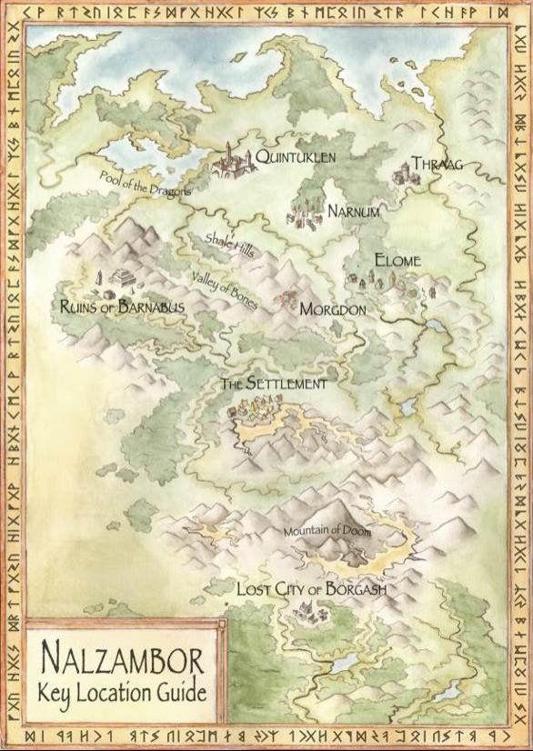 The Chronicles of Dragon

“What do you mean,
more trouble comes
?” Nath said to Snarggell, flinging off the lurker slime that coated him. “How could there be more trouble than that thing?” He eyed the monstrous corpse behind him. It smelled as foul as it looked.

Snarggell blinked his eyes repeatedly and said, “Have you forgotten the undead army that awaits? And the dragons? There are many, are there not? Once they sense the lurker is dead, they’ll come.”

Weary, Nath grabbed Fang and pushed himself to his feet. He stuffed Dragon Claw back inside the hilt.

“I suppose we had better get out of here then.”

“And go where?” Snarggell said. “I’m fine chipping away at jaxite until I’m dead. So are the rest of us.”

The gnomes huddled around him, murmuring in agreement. Clenching small tools and chisels between their fingers, they moved on and started picking at the stones.

“I didn’t come here to help you continue your work for Barnabus. I came here to put an end to that,” he said, slinging more muck off his hand. “And the end has come. Put down your tools and stop picking.”

“That is not possible,” Snarggell said. “We are crystal gnomes. This is what we do.”

“So you serve an evil cause, then?” Nath said, eyeing him.

“We’ve no proof of that, only your word, and we hardly know you, Scaly One.”

“No proof,” Nath argued. “Were you not brought here against your will? Are you not unable to leave? Snarggell, don’t be absurd.”

Snarggell stormed away, picked up his hammer and chisel, and joined the others.

Nath felt every little tap inside his skull, and a headache coming on. Sometimes, slaves are uncomfortable with the thought of freedom. Prisoners aren’t kept well, but they know what to expect. Freedom can be scarier, because you have to fight for it. His father had told him that. Nath rubbed his finger under his lip and paced the cave. It wasn’t long before he found himself standing underneath the inverted staircase that had appeared once again. He rubbed his forehead.

What was that thing, the lurker? What kind of power was that?

He ran his claws through his slimy hair and slung muck to the floor.

He could smell himself. Taste a nasty grime in his mouth. He took a path under the inverted stair and stopped at the edge where the cavern’s mouth opened. The winds were refreshing. The river far below looked refreshing.

I could go for a bath about now. A long one.

A dragon streaked through the sky beneath him, followed by another, two emeralds no bigger than Nath. Necks low and wings spread wide, they glided in circles, screeching back and forth at one another. Nath scratched his back.

If only I had wings!

He headed back for the gnomes, deep in thought. It was time to put their work to a halt, one way or another.

Snarggell peeked up at him, turned away, and kept on chipping.

The gnome’s huff bristled his beard. His hands continued in a flurry of motion.

Nath marched over, snatched the tools out of his hands, and slung them aside.

“What are you doing?” Snarggell blurted out, face reddening. “We aren’t going anywhere! Nothing awaits us but death out there.”

“Nothing awaits you but death
in here
!” Nath said, snorting small flames from his nose.

All the gnomes stopped what they were doing, eyes wide as saucers. They looked at Snarggell. He looked back at them, folded his knotted arms over his chest, and said, “We’re staying right he–
ulp!
”

Nath snatched the gnome off his feet and tucked him under his arm like a satchel.

Nath grabbed another one and started carrying them towards the inverted staircase. Their struggles were fierce but in vain. Nath’s powerful arms held them tight.

“Stop him! Stop him!” Snarggell screamed at the others.

The remaining gnomes attacked like a swarm of bearded bees. They climbed on Nath’s legs and on his back. Muttered curses. Tried to pull his arms away.

Nath dragged them one slow step at a time. Towards the inverted stairs and beyond.

“You’ve no right to do this!” Snarggell yelled. “You’ll get us all killed. Kill yourself!”

Snarggell did all the talking. The others fought in a furious frenzy, like wild children oblivious to anything going on around them except bringing the giant down.

Nath lumbered on. He made it ten steps from where the jaxite cavern dropped off into the river. The dragons that circled below were gone.
No time like the present.

“You remember how to swim, don’t you?” he said.

Snarggell’s head whipped around in desperation.

“But you haven’t bathed in almost forever, have you?”

“Huh? But you can’t be doing what I think you’re doing.”

Nath made a fierce grin.

It didn’t register with the gnomes. Like a pack of loyal dogs, they only wanted to rescue their leader, giving no thought to the consequences, one way or the other. They clung to him like burs from the brush.

Nath slogged his way over the next few steps and leapt into the air.

The plunge went fast. Wind whistled in his ears, and Snarggell’s screams could barely be heard. Nath just hoped no one would get hurt. Headfirst he fell, watching the river rush up to meet them. Suddenly, two emerald dragons swooped underneath them, jaws open wide.

Running his slender fingers over the cool wood of the Elderwood Staff, Bayzog sat and caught his breath. He, Brenwar, and Ben had been on the move, cutting through the woods, ever since the copper dragon’s lethal attack left Otter Bone and Horse Neck dead. And they weren’t the only ones, either. Many others were dead. He could still see them in his mind, broken and twisted like a tornado had run through them. He held his staff tighter.

“Can ye keep up, Elf?” Brenwar said, combing his stubby fingers through his beard. “Or do I need to carry you?”

“Life and death happen in moments.”

The part-elf wizard had seen it several times with his own eyes, but that last assault had shaken him. The dragon—copper, black-winged and black-tailed—had struck like an assassin. He still saw the murderous look in its snake eyes. It was a predator. A killer. It had snapped the two men like chicken bones. He tightened his grip on the Elderwood Staff and let the power of the ancient wood fill him.

He drank, said, “Thank you,” and handed it back.

“We’re still heading after Dragon, aren’t we?” Ben asked, taking a sip himself. “He needs us. Otter Bone said so himself.”

“Aye,” Brenwar said, “that’s what we should have been doing all along. Let’s move, Elf.” He slung War Hammer over his shoulder. “We’ve got a copper on our tails, and I get to protect you all the time.”

“I can take care of myself just fine,” Ben said. Holding out Akron, he nocked an arrow. “I think it’s
you
who need
our
help. If a dragon attacks from the air, how will you hit it with that ugly hammer? Your ability to jump is a bit lacking.”

“Watch yourself, Human,” Brenwar said, buckling his brows. “I’ve pulled you from the pit more than one time. Now let’s get moving.”

Brenwar led, marching through the forest like a bearded bear. Ben remained close behind. The sun dipped behind the Floating City, and the forest became dark and quiet, the hum of bugs silent. Even the hoots of the owls were missing.

Bayzog had finally become accustomed to sensing differences in nature. This should have been elven instinct, but it had taken decades. And that wasn’t all he had developed. There was a greater sense of awareness. Meditation and the Elderwood Staff helped with that. The suffocating grip of evil was always in his midst.

Bayzog and Ben flanked the dwarf. Ahead in a clearing, a wide creek’s trickling waters ran towards the river. A dragon’s long neck was lowered into the waters.

“That’s the one,” Brenwar said. “The one I should have crowned. Slippery lizard.”

Brenwar pushed it away, saying, “What are you doing? They be upwind of us. Watch and wait, foolish boy.”

Ben’s rugged taciturn face scowled at him, but Brenwar kept his eyes fixed ahead. More movement slithered through the shadows: dragons, two more, weaving through the trees with their necks low and tongues licking out. Bayzog could see the muscles rippling under their scales. Fear filled him, more than ever before. The dragons had gone from fascinating to horrifying.

The dragon with his head in the stream jerked his neck out and choked down a fish. The other two waded into the waters and dipped their scaly heads in.

“We should strike now,” Ben said in a low voice. “While their guard is down.”

“So ready to risk death, are you?” Brenwar said. “We wait. They’ll move along.”

“In a day. Maybe two. They wait for us. Those dragons are no fools.”

Ben was right. The dragons were biding their time. With such long lives, they could afford to. But Bayzog wasn’t sure if the dragons were hunting them or not. Why had they killed Otter Bone and Horse Neck? Was that who they hunted, or were they hunting all who opposed Barnabus now? He felt time pressing inside his chest. He and his friends needed to move. Find Nath. Bayzog couldn’t believe what he said next.