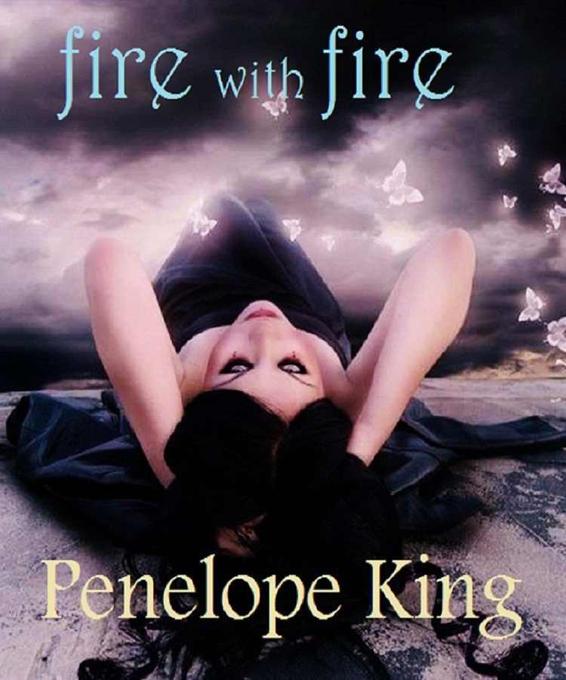 A novel
by
Penelope King

This book is a work of fiction. The names, characters, places, and events are products of the writer’s imagination or have been used fictitiously and are not to be construed as real. Any resemblance to persons, living or dead, actual events, locales or organizations is entirely coincidental.

A Demon Made Me Do It

It’s cliché to say it’s always darkest before the dawn, but in my case it’s true. There is a brief window of time, just before I wake, when I am not
Me,
and she is not
Her
. We are together as one, unified in our blissful state of unconsciousness.

It is also during this time that we can dream of him…remember the way he held us, kissed us, looked into our eyes and filled us with such love.

The memory of loving and being loved by Kieron is the one thing she and I now share, along with the unbearable pain we’ve silently suffered since he’s been gone.

Now, we also share the soul-crushing fear that he’s never coming back to us.

…And we are more damned than ever.

I don’t know what it is about strip clubs that seems to draw the nastiest types of demons, but for some reason they’re attracted like stink on fish. To be honest, I’m not sure which is worse—the soul sucking Lazerines who work these places, or the scummy human men who frequent them. I swear, if one more grubby Sapie asks me for a lap dance I’m going to rip his thing right off.

“Hey, sexy, want some company?” asks a middle-aged Sapie wearing a rumpled business suit. Apparently my disgusted glare isn’t enough to dissuade him as he moves to the empty chair beside me and, without waiting for my reply, begins to sit down.

I roll my eyes and swish my hand, causing the chair to fly out from beneath him. He falls hard on his backside, spilling his overpriced cocktail all over his cheap suit. A few patrons glance in our direction, but quickly return their gazes to the center of the room. They are far more interested in the scantily clad girls moving seductively on the raised stage beneath the pulsating lights than some clumsy drunken fool.

The cheesy voice of the club DJ rings out over the loudspeakers. “And now get those dollar bills ready and help us welcome the very lovely Serenity to the stage.”

Hoots and catcalls sound as a slender brunette wearing a miniscule skirt and bikini top sashays out from behind the thick velvet curtain. She begins her seductive routine, rolling her hips, swishing her hair, and spinning herself around a tall, metal pole. As she bends backward, letting her long hair fall free, I catch the distinctive markings on her back under the flash of the strobe lights.

To anyone else they look like tattoos, but I know better. They are the Mark of the Lazerine… powerful female demons who control men’s minds through lust and desire. Only the Prince of Darkness knows how many countless Sapies have lost their house payments and kid’s college funds under their spell. Not like I care about that, but Lazerines are loathsome creatures who are particularly satisfying to kill. And right now I could definitely use some satisfaction.

I take a few sips of my Jack Daniels and stand up, careful not to trip over Mr. Mid-Life Crisis struggling to get off the floor. As I make my way to the stage, I retrieve a fistful of bills from my inside my bra. Lazerines are addicted to money and use their powers to drain their victims dry. The money will keep her distracted. Otherwise she might realize that I’m a demon, and I am so
not interested
in a public brouhaha tonight. I’ll kill her clean and easy, in the VIP room where there are no witnesses. None who will be paying any attention to me, that is.

The room of men turn to gawk as soon as I start laying dollars down on the stage, their faces aglow with carnal pleasure. Of course they love it…this is their best fantasy right here. I’m by far the most beautiful girl they’ve ever seen, and Sapie men are
such
suckers for a little girl-on-girl action.

I wonder if they’d still be so turned on if they knew I was planning to rip her heart out in a few minutes.

“Hi, beautiful,” the Lazerine purrs in my ear as I lay down a row of five-dollar bills in front of her.

“Can I get a VIP dance with you when you’re done?” I ask as she rubs her face against my cheek in appreciation.

“I’d love to. It starts at one hundred dollars.” She reaches for the money and slips it into the side of her tiny pink G-string.

“Not a problem.” I flash another thick stack of bills under her nose. Her eyes glow brightly before giving way to a smug smile.

“I’ll be right back, darling.” She collects the rest of her tips before prancing off the stage.

I return to my table and signal the waitress to bring me another drink while I wait. When she returns, I take several sips of my Jack Daniels and let out a long sigh. My heart just isn’t in the game anymore. There was a time when I loved nothing more than slaying unsuspecting demons—if not for fun, for the practice. All so I could keep my human half, Liora, protected from harm, and to make sure I was ready to face the Amazèa when it came time for our final reckoning. But of course, that didn’t go as I’d planned.

I’ve had more than my share of second thoughts since that night in the cave when Kieron took me to face the Amazèa—the demons responsible for killing my closest friends and splitting my soul in half. I had a decision to make…I could kill them, but I would lose Kieron forever. Or, I could let him turn them in to the Legionare and we could be together.

I still blame Liora for whatever emotional insanity swayed me to choose a life with Kieron over killing the Amazèa like I’d always planned. Many nights, I wonder if I made the right choice.

It would be so much easier if Kieron would return so I could look into his eyes again and feel his lips on mine. To give me a reason to remember
why
I’d chosen him…why I’d chosen
us
. But he’s been gone for over two months, and now I’m starting to wonder if he’s
ever
going to come back. And the more I wonder, the sicker and angrier I feel.

In the meantime, I have to do something to keep myself from going completely crazy. If it’s killing some low-level Lazerine in a seedy strip club outside of Fairfax, Virginia, then so be it. A demon’s gotta do what a demon’s gotta do.

“I’m ready when you are,” the unsuspecting Lazerine whispers in my ear as she comes up beside me. I take a quick swig of my drink and flash her a smile as I rise to my feet.

Together we enter the glass doors and head to a darkened corner. “You’re so pretty,” she coos as she leads me toward a couch in the back. “What’s your name?”

I sneak my hand down into my thigh-high boot and remove my emerald dagger.

“They call me Lucky.”

“Cuttin’ it kinda close, aren’t you Lucky girl? You don’t have much time until sunrise in Sapie land. Don’t want your better half showing up and making a scene.” Bones laughs and rubs my leg affectionately. Scowling, I elbow him in the ribs and take another drink.

“Last one and I’m outta here,” I say, and spin my barstool around. Demon Bar, the place where all demions, demons, and creatures in Dryndara come to replenish off the Source Energy, is nearly empty. Most of its usual occupants are off preparing for their lives in the human world, just as I should be doing. But the nagging sense that something is wrong has been plaguing me for many nights now, and gotten much worse over the past several hours. I just needed a quick stop off at the Bar on my way home, and a chance to chat with my best friend, Bones.

Things had been pretty weird between us for a while, so I’m glad we seem to be getting back to normal. I hated the awkward tension. But it was my fault, I suppose. In a moment of weakness, I’d given in to his irresistible charms and almost allowed myself to be seduced by him in his mountainside lair. If it wasn’t for the fact that, in my euphoria, I’d said Kieron’s name instead of Bones’, who knows what would have happened?

Actually,
I
know what would have happened: We would have made love, it would’ve been
amazing
, and my feelings for Bones would be more confused than ever. If I think I’m emotionally unstable now, I can just imagine how I’d feel if I let myself fall for him. It’s bad enough that Kieron just abandoned me. But to watch Bones leave me every night to make love to other human girls—many other human girls…
forever
—well, that’s a recipe for self-inflicted torture if there ever was one.

But there are times, despite my intense feelings for Kieron, I still can’t help but wonder what it would be like to be with Bones. To really be
with
him. To run my fingers through his luscious bronze hair and lose myself in the depths of his coffee-colored eyes. To feel his intoxicating energy flow through me, and succumb to his delicious masculinity. When Bones looks at me, really looks me, I feel like I’m softly melting under his gaze. If he was a drug, I’d be addicted.

Now, with Kieron being gone so long, Bones and I have started to ease back into our normal routine. Our playing and flirting has almost reached “pre-Kieron” levels. As I catch Bones’ gaze, I can’t help but wonder if he hopes Kieron never returns, just as I desperately hope he will.

I swallow the last sip of my drink and lean over to give him a light peck on the cheek as I stand up. “Bye, sweetie, see you tomorrow.”

He rises to his full height and wraps his arms around me, smothering me in his gentle warmth. “Later, Lucky love.”

Once outside, I sprint across the Bridge of Kings, barely glancing at the churning river of fire below. Upon reaching the other side I let out a sharp whistle. Almost immediately, my black stallion emerges from his hidden spot deep in Dryndara’s forest. I leap onto his back and lean forward, clutching a fist of his onyx mane.

Magician Prince by Curtis Cornett
Sweet Like Sugar by Wayne Hoffman
The Boy from Aleppo Who Painted the War by Sumia Sukkar
The History of History by Ida Hattemer-Higgins
Man-Kzin Wars XIV by Larry Niven
Star-Struck, Book 1 by Twyla Turner
ProvokeMe by Cari Quinn
The Hourglass by Donaldson, Casey
The Eiger Sanction by Trevanian
The Reawakened by Jeri Smith-Ready