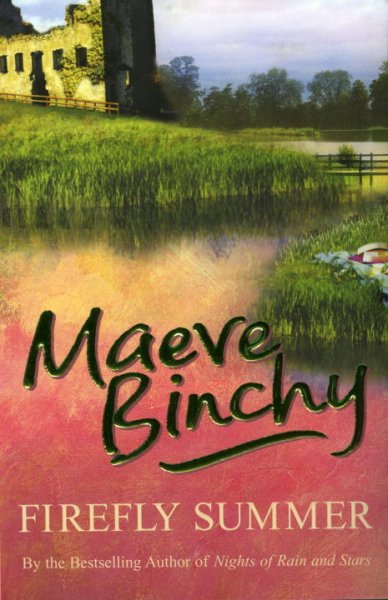 Published in the United Kingdom by Arrow Books in 2006

Maeve Binchy has asserted her right under the Copyright, Designs and Patents Act, 1988 to be identified as the author of this work.

This is a work of fiction. Names and characters are the product of the author’s imagination and any resemblance to actual persons, living or dead, is entirely coincidental.

First published in the United Kingdom in 1988 by Century Hutchinson Ltd.

First published by Arrow Books in 1997

Papers used by Random House are natural, recyclable products made from wood grown in sustainable forests. The manufacturing processes conform to the environmental regulations of the country of origin.

I want to thank all my friends for their support and encouragement, particularly Rosie Cheetham and Chris Green. And to Gordon Snell, who has made my life so good and so happy, I would like to dedicate
Firefly Summer
with all my gratitude and all my love.

Maeve Binchy was born in County Dublin and was educated at the Holy Child Convent in Killiney and at University College Dublin. After a spell as a teacher in various girls’ schools, she joined the
Irish Times
, for which she wrote feature articles and columns. Her first novel,
Light a Penny Candle
, was published in 1982, and since then she has written more than a dozen novels and short-story collections, each one of them a bestseller. Several have been adapted for cinema and television, most notably
Circle of Friends
in 1995. She was awarded the Lifetime Achievement award at the British Book Awards in 1999. She is married to the writer and broadcaster Gordon Snell.

‘
Firefly Summer
is warm, humorous, sad and happy. Reading it is a joy’
Irish Independent

‘Binchy’s novels are never less than entertaining. They are, without exception, repositories of common sense and good humour . . . chronicled with tenderness and wit’
Sunday Times

‘Maeve Binchy is one of the few writers who can pull at your heartstrings . . . reading her books is like gossiping with old friends’
Daily Express

The sun came in at a slant and hit all the rings and marks on the bar counter. Kate Ryan managed to take a cloth to them at the same time as she was kicking off her house shoes and pulling on her wellington boots. She tucked her handbag under the counter and in almost the same movement opened the kitchen door to make sure that Eddie and Declan weren’t torturing the new girl. The new girl had red eyes and a sad face and was missing her farm home. She might run back to it if Eddie and Declan were at their worst. But mercifully the appeal of the tortoise was still very strong even after three weeks. They lay on their stomachs and fed it stalks of cabbage, screaming with delight when it accepted them.

‘John,’ she shouted, ‘will you come down to the bar, I have to go across the river and see what’s keeping the twins. They have to be polished and smartened up for the concert and there isn’t a sign of them.’

John Ryan groaned. His train of thought was gone again. He had thought he would manage an hour or two on his own, struggling with his poetry. ‘Give me a minute,’ he called, hoping to catch the idea before it was gone.

‘No, they’ll be late as it is. Listen, bring your paper and
pencil down, there’s likely to be no one in, but there has to be someone behind the counter.’

The door banged behind her and John Ryan saw, through the bedroom window, his wife run across the small footbridge opposite the pub. She climbed over the gate like a girl instead of a woman in her thirties. She looked altogether like a girl in her summer dress and her boots as she ran lightly across to the ruined house, Fernscourt, to find the twins.

He sighed and went down to the pub. He knew there were poet publicans, he knew there were men who wrote the poetry of angels in the middle of the stinking trenches of war. But he wasn’t like that.

John Ryan moved slowly, a big man with a beer belly that had grown on him sneakily during the years standing behind a bar, jowls that had become flabby at the same trade. His wedding picture showed a different person, a thinner more eager-looking figure, yet the boyish looks hadn’t completely gone. He had a head of sandy brown hair only flecked with grey and big eyebrows that never managed to look ferocious even when he willed them to, like at closing time or when he was trying to deal with some outrage that the children were reported to have committed.

Kate had hardly changed at all since their wedding day, he often said, which pleased her, but she said it was just a bit of old plamas to get out of having to stand at the bar. It was true, though; he looked at the girl with the long, curly dark hair tied back in a cream ribbon that matched her cream dress and coat. She looked very smart on that wet day in Dublin, he could hardly believe she was going to come and live with him in Mountfern. Kate hadn’t
developed a pot belly from serving drinks to others, as she often told him sharply. She said that there was no law saying you must have a drink with everyone who offered you one or pull a half pint for yourself to correspond with every half-dozen pints you pulled for others.

But then it was different for women.

John was the youngest of the seven Ryan children and the indulged pet of a mother who had been amazed and delighted at his arrival when she had been sure that her family was complete. He had been overfed and given fizzy drinks with sweet cake as long as he could remember. As a lad the running and leaping and cycling miles to a dance had kept him trimmer. Now, between sessions of writing his poetry and serving in his bar, it was a sedentary life.

He didn’t know if he wanted it for his sons; he had such hopes for them – that they might see the world a bit, study maybe and go on for the university. That had been beyond the dreams of his parents’ generation. Their main concern had been to see their children well settled into emigration; the church had helped of course, educating two nuns and two priests out of the Ryan family. John didn’t see any vocation amongst his own offspring. Michael was dreamy and thoughtful: maybe a hermit? Or Dara a resourceful Reverend Mother somewhere? Eddie was a practical child, possibly a missionary brother teaching pagan tribes to build huts and dig canals. Declan the baby. Maybe they could make a curate out of him near home where they could keep an eye on him.

This was all nonsense, of course. None of them would end up within an ass’s roar of a religious life. Still, John Ryan never saw the future standing surrounded by three sons and possibly his daughter all in the trade.

There would never be enough business, for one thing. Like many Irish towns Mountfern had the appearance of having far too many pubs already. If you went down the main street, Bridge Street, there were no less than three public houses. Foley’s at the top of the town, but that was hardly a pub at all these days, just a counter really and a few friends of old Matt Foley drinking at night, they’d hardly know how to serve a real customer. Then there was Conway’s which was more a grocery but it had the bar at the back. Conway’s had a clientele of secret drinkers, people who didn’t admit to any kind of drinking, who were always going out for a packet of cornflakes or a pound of flour and would toss back a brandy for their health. Often too, it had a funeral business since old Barry Conway was the undertaker as well. It seemed only right to come back to his place to drink when someone had been buried up on the hill. And Dunne’s was always on the verge of closing. Paddy Dunne never knew whether to reorder supplies, he always said that it would hardly be worth it since any day now he’d be going to join his brother who ran a pub in Liverpool. But then either there would be a downturn in the fortunes of the Liverpool pub or an upswing in the drinking patterns of Mountfern. There was an unsettled air about his place and constant speculation about how much he would get if he were to sell his licence.