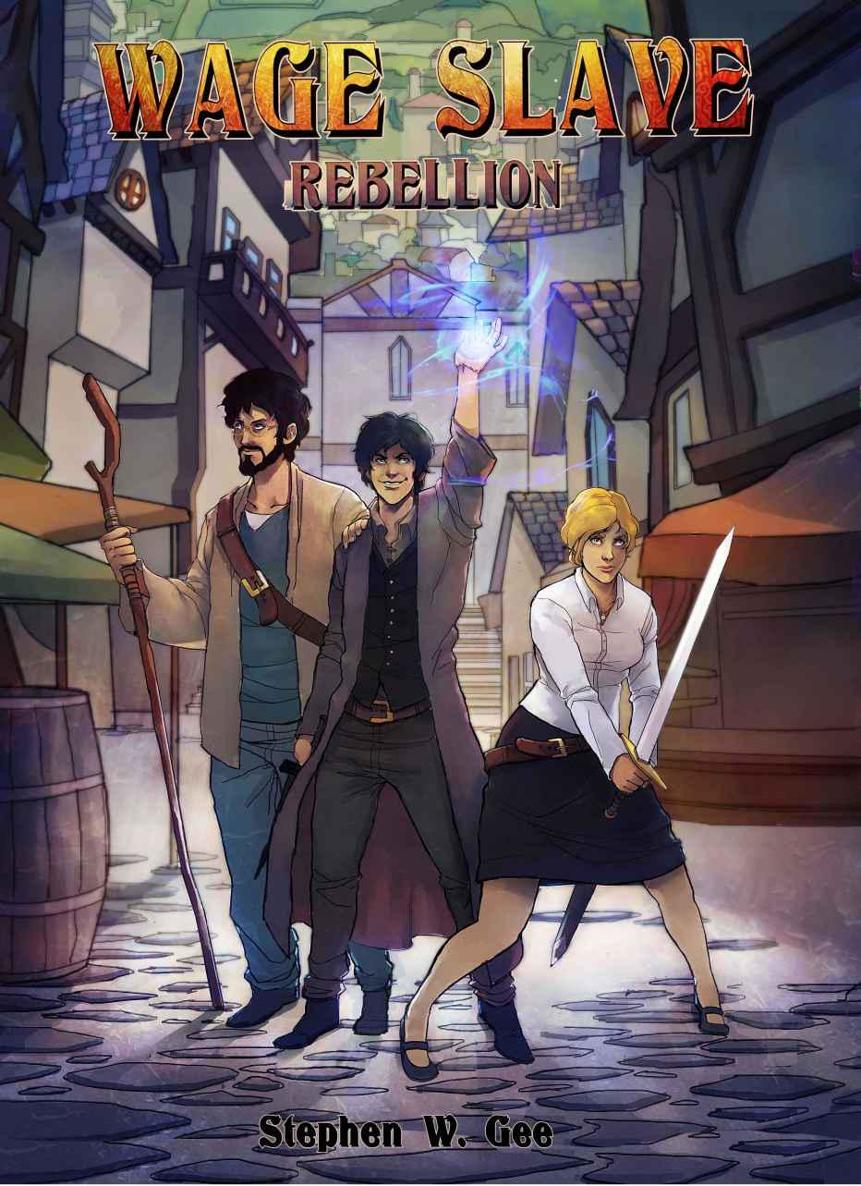 The Legend of Firesign

This is a work of fiction. Names, characters, organizations, places, events, and incidents are either products of the author’s imagination or are used fictitiously. Any resemblance to actual persons, living or dead, events, or locales is entirely coincidental.

To my best friend, Brian Hughes. Thank you for putting up with me talking about this book for far too long, and helping me finish it. You’re the best.

It was late on a not particularly important weekday afternoon. Inside a bar on a street full of bars, the lunch rush had given way to a lazy lull while evening still approached. Those still inside were scattered around the bar’s single room, each sitting alone as they quietly drowned themselves. Behind the bar was a gruff, weathered man with a stained dishrag tossed over his shoulder. He was cleaning mugs with the practiced ease of a man who had been doing it for years, and would continue for many more.

The front door opened, flooding the room with dusty yellow light. The patrons winced. A shape moved into the doorway, and then the door swung shut.

Dressed in a fine navy tunic and tailored slacks made dusty from the streets outside, the man looked around. In one hand was a rigid black case, large enough to hold an organ keyboard with room to spare for half the pipes; in the other was the hilt of the sword that hung at his side. Around his shoulders, a well-worn brown cloak guarded against the waning winter chill.

His shoes picking up dirt and sawdust as he went, the man approached the bar. He deposited his heavy black case onto a stool and settled himself beside it.

“What’ll it be?” asked the bartender as he cleaned his mugs.

“Sure,” said the bartender. A shot was poured.

The man raised his glass, and the shot disappeared.

“Ahhh!” said the man as he set the glass down, carefully. It went
clink
.

“Another?” asked the bartender.

“I’m Mazik Kil’Raeus, and you can call me whatever you like,” said the man, bowing. He smiled. “Nice to meet you, Dynad.”

Dynad returned the bow. “You too,” he said, though he didn’t sound as if he meant it.

Mazik took note of the burns, the hastily repaired tables and chairs, and the marks scored deep into the walls. And the furniture, and the ceiling, and quite a lot of the people, for that matter. “You get a lot of adventurers in here?”

“Here,” said Dynad, setting down the full shot glass. “Yeh, we get our fair share.”

Dynad shrugged. “A bit. Can’t complain too much. We get a lot of business from ’em.”

“Enough to cover all the damages?”

Mazik’s case landed on top of the bar with a heavy
thwack
, sending ripples through his drink. The latches on the side clicked open, and the lid followed.

“I don’t think I mentioned this before, but I work for AIW, the number-one independent distributor of magickally enhanced defensive equipment in the city,” said Mazik.

“Only because my mother didn’t give birth to a girl,” said Mazik smoothly. “By the way, you’re the owner of this establishment, correct?”

“Nothing unfortunate about it!” said Mazik, his voice taking on the upbeat, slightly sing-song tone of a salesman running up to his pitch. “Tell me, how often do your patrons get into serious altercations?”

“If you’ve ever been in a bar with adv—” Dynad stopped and thought about this. “A bar
period
, you know the answer to that question,” he finished grumpily. “Look, I’m not interested. I don’t need any—”

“But what if I were to tell you it would save you money?” interrupted Mazik.

“I would tell you you’re full of shit. I’m never going to make money stabbing my customers,” said Dynad.

“Ah, but you could keep the money you’ve already made!” said Mazik. “I’m sure you’ve had situations where someone got a bit too drunk, realized they were out of money, and decided the cash box would be a good place to get more, right?”

“Of course. I can see you’re a busy man,” said Mazik, against all evidence to the contrary, “but what I can also see is that you’re a
business
man. Let’s make a deal.”

“Here’s what I’ll do for you,” said Mazik. “I’ll come back later tonight and talk to some of your patrons, see if they would like some of my merchandise,” he said, patting the case. “In exchange, I’ll give you a quarter of my profits. Honestly, you’ll probably get more than that, ’cause I’m bound to buy a few rounds while I’m here.”

“Ah, so you recognize their quality!” said Mazik, his face brightening. He selected a knife, holding it up for Dynad to see. “Fantastic workmanship, isn’t it?” he said, laying the blade on his palm. “Just look at how that blade glimmers. And this handle, made from the finest—”

“What part of ‘not interested’ do you not understand?”

“The ‘not’ part,” said Mazik. He leaned forward. “Come on, this is a great opportunity for you to make a little extra money! They’re always wrecking up the place, right? If they’re going to do it anyway, you might as well make money off them coming and going.” Mazik raised his glass, offering a toast. “What do you say?”

Finally, Mazik shrugged and drank his whiskey. “All right. In that case, I don’t want to take up any more of your time. If you ever want anything, here’s my card.” Mazik placed it on the bar. “My office is on the north side of town. Just send a messenger and ask for Mazik, and I’ll come see you within a day or so. Sound good?”

“Right,” said Mazik. He looked around. A few seats away a balding, middle-aged man with a nasty sunburn and listless eyes sat staring into his drink.

“How about you?” said Mazik, sliding over. “Interested in a weapon or two?”

“Already got one,” said the man. He opened his jacket to reveal a battered knife, its notched blade having apparently seen great deal of use.

“And a good one it is,” Mazik lied smoothly, “but what happens if someone takes it from you? Disarmed, you wouldn’t be able to protect yourself. Or your family…?”

“Fuck off,” said the sunburned man.

“Not a big family man, gotcha,” said Mazik. He gave an exaggerated sigh. “I guess—”

“Oh, fuck you, buddy!” roared the sunburned man. He balled up his fists and swung, aiming for Mazik’s head.

With a snap and a sizzle, the sunburned man fell backward, his arm shaking as he howled in pain.

Mazik lowered his hand. “Now, you see, if you had one of
our
weapons, that wouldn’t have happened. It would have absorbed part of the force of my spell, so you wouldn’t have—”

Something clicked next to Mazik’s head. He froze.

Mazik slowly turned and found himself eyeball-to-arrowhead with the business end of a crossbow.

“Hey, no need to get angry,” said Mazik, raising his hands. The fact that he was still holding a knife didn’t help. “I’m just trying to get in an honest day’s work.”

“There’s little honest about what you do. I won’t have anyone bothering my customers with shit like that, especially not the way you do it. Now collect your things and get out.”

“Of course. You only had to ask,” said Mazik. He packed his case, picked it up, and slowly backed away. Dynad came around the bar and followed, the crossbow pointed at Mazik the whole time.

“Oh, I almost forgot one thing,” said Mazik, stopping with the front door half open.

“Thanks for the free drinks!” Mazik disappeared outside.

By the time Dynad burst through the front door in a fury of impassioned cursing, Mazik was a block away and accelerating. “Serves you right for being such a dick about it!” he yelled.

A crossbow bolt collided with Mazik’s forehead, tossing him to the ground like a pile of dirty rags. He twitched for a few seconds, and then stopped moving as he drew his last breath…

…or he would have, were Mazik a normal salesman. He was not. As the crossbow bolt struck his forehead, there was a flash of blue light, and the bolt fell to the ground. Mazik staggered a few steps.

“Hey, that really hurt!” yelled Mazik, a bright red welt growing on his forehead. “I feel like you’re overreacting.”

Mazik jumped as another bolt whizzed past his head. He waved his arms wildly. “Will you
stop
that!” he said, and then turned and ran.

Dashing into an alley, Mazik hurled himself against the far wall and scrambled over. He dropped his product case and followed it, flopping onto a pile of trash cans with a splintery crash.

A few long seconds passed, and then Mazik popped up and resumed legging it.

Mazik ran for several more streets before he came to a stop. He stood there for a time, trying to breathe quietly, listening to make sure he wasn’t being followed anymore.

Though not even winded, Mazik slumped against the wall, letting himself slide to the ground. Around him the city buzzed with the sound of thousands of people going about their work or play, living lives full of happiness and love and purpose and laughter, or at least so it sounded to Mazik. Yet here he sat, staring blankly at a wall like one of the drunks slowly killing themselves back in the bar he had so quickly left.

Mazik sighed. “I really need to find a new job.”

With a grunt, he slapped his palms on his knees and pushed himself up. It was time to head to the next potential customer. He needed to get back to work.

Maybe I’ll even make a sale this time,
he thought as he walked out into the street proper.
I’d like to actually make some money today. It would be nice to eat tonight.

“Fuck my life,” he said, and then trudged onward. 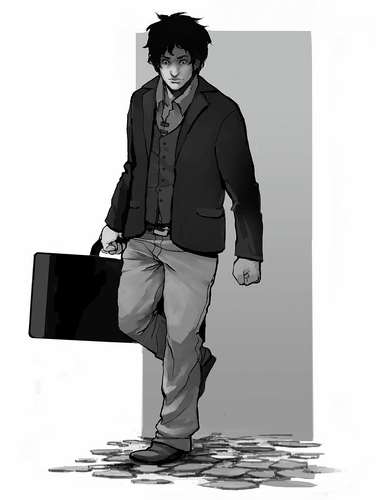 Adventure One
Working for the Weekend

This is the city of Houk
1
, home of a thousand scheming merchants. Houk is said to be the most vibrant trading hub in the Eastern world, which is true. It’s not said very often, though, because people usually start by calling it big, loud, smelly, and crime-ridden, and then never get to the flowery language on account of having lost all of their money.

Every day, ships, carts, wagons, caravans, and little old ladies with half a village strapped to their backs came into the city by the thousands, from every country on the planet Houk wasn’t actively fighting, and several they were. Houk was a city so large it not only defined the country, it
was
the country—the city of Houk was the capital of the country of Houk, which lay nestled beside the Houk River
2
, which ran through the middle of the Houkain plains, and so on and so forth, all of which points to either a stark lack of creativity or a surplus of ego on the part of whoever did the naming. Probably both
3
.

Abner & Me by Dan Gutman
Genetic Drift by Martin Schulte
How to Save a Life by Sara Zarr
Beware the Fisj by Gordon Korman
All That Followed by Gabriel Urza
Voyage of Ice by Michele Torrey
The Book of Daniel by E. L. Doctorow
Dancers in the Afterglow by Jack L. Chalker
The Emerald Talisman by Pandos, Brenda
Stranded by Val McDermid