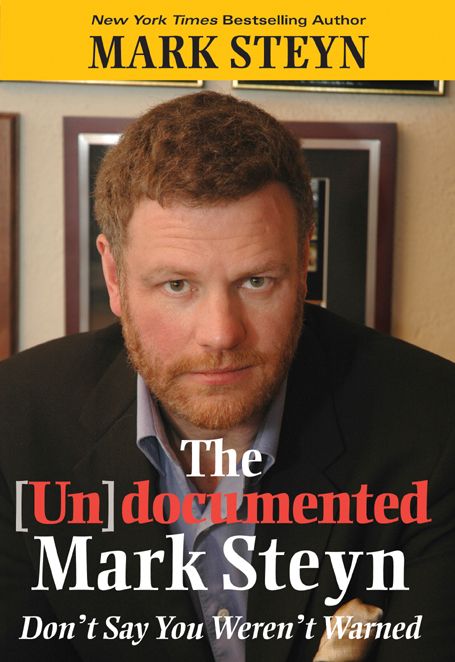 Summary: “He’s brash, brilliant, and drawn to controversy like a moth to a flame. Mark Steyn is America’s most brutally honest columnist, ready to sound off on every hot issue in the news-and always ready to ruffle feathers. Prepare to be shocked and entertained by this curated compendium of Steyn’s most provocative, hilarious, and thought-provoking columns”-- Provided by publisher.

Books are available in quantity for promotional or premium use. For information on discounts and terms, please visit our website:
www.Regnery.com
.

Me and My Little Black Dress

II: SPIRITS OF THE AGE

Did the Earth Summit Move for You?

III: THE REPUBLIC OF MANNERS

Potpourri Roasting on an Open Fire

We’ve Figured It Out

The Audacity of Grope

In the Absence of Guns

Arms Are for Dining

IV: THE BUREAU OF COMPLIANCE

Signs of the Times

VI: THE STORIES WE TELL

Look Where Your Stories Have Landed You

The Footstools of Camelot

Too Big to Win

The Man at the Border

IX: THE WAR ON WOMEN

Barbie in a Burqa

How Unclean Was My Valley

Sounds of the Rude World

Say, It Ain’t So Joe

We Aren’t the World

Moon River and Me

The Waste of People

A Town with Pity

The Right to Choose

How Weird How Soon?

Every Dog Should Have His Day

“There Is No More Molly”

Footsteps in the Desert

A Stroll at Twilight

XVI: AGAINST THE GRAIN

The Reformation of Manners

Laying It on the Line

ME AND MY LITTLE BLACK DRESS

A DECADE OR SO
back, early in the 2004 presidential election season, a publisher took me to lunch and pitched me a book. She wanted me to write a John Kerry election diary. Easy gig. All I had to do was follow him around and mock him mercilessly. Well, I hemmed and hawed and eventually she got the picture and said, “Okay, what would you like to write a book about?”

And so I replied, “Well, I’ve got this idea for a book called
The End of the World
.”

And there was a pause and I could feel her metaphorically backing out of the room, and shortly thereafter she literally backed out of the room. But not before telling me, somewhat wistfully, “You know when I first started reading your stuff? Impeachment. Your column about Monica Lewinsky’s dress was hilarious.” She motioned to the waiter. “Check, please!” And I got the distinct impression she was feeling like the great pop guru Don Kirshner when the Monkees came to him and said they were sick of doing this bubblegum stuff and they needed to grow as artists. My “Monica’s dress” column appeared in Britain’s
Daily Telegraph
in 1998, although it was, in fact, datelined two decades later—August 22, 2018:

She is older now, her once dazzling looks undeniably faded, her famous beauty worn and creased.

“Sorry about that,” she says. “I was supposed to get ironed yesterday.”

Yes, it’s “that dress”—the dress that, 20 years ago this month, held the fate of a presidency in her lap. It has been two decades since the day she gave her dramatic testimony to the grand jury and then promptly disappeared into the federal witness protection program. Even as she recalls her brief moment in the spotlight, she looks drawn. But that’s because, following extensive reconstructive surgery, she’s been living quietly as a pair of curtains in Idaho.

“What do you think?” she says, saucily brushing her hem against the sill as her pleats ripple across the mullions. “It cost less than Paula Jones’ nose job.”

To be honest, I was lucky to get the interview. The dress was supposed to be doing the BBC—the full sob-sister treatment, Martin Bashir, the works—but, to protect her identity, they wanted to do that undercover secret-location protect-your-identity trick with the camera that makes part of the screen go all fuzzy and blurry.

“Are you crazy?” she yelled at them. “It’ll look like I’ve still got the stain.”

The Nineties were a lot of fun for a columnist. A third Clinton term and I could have retired to the Caribbean. But then came the new century and the new war, and I felt like Ingrid Bergman in
Casablanca
when she tells Bogey, “I put that dress away. When the Germans march out, I’ll wear it again.” I put Monica’s dress away. When the jihadists march out, I’ll wear it again.

My apocalyptic tome came out in 2006 (courtesy of the publisher of the book you’re holding right now) as
America Alone: The End of the World as We Know It
—jihad, demographic decline, the death of Europe, all the fun stuff. I followed it with
After America: Get Ready for Armageddon
—debt, doom, decadence, societal meltdown, total civilizational collapse, all the even more fun stuff. I don’t know whether the Monkees in their serious-artist phase ever
felt it might be nice to sing “Daydream Believer” occasionally, but, after a decade of apocalyptic despair, I’ve found myself passing the closet and eyeing Monica’s dress wistfully. All jihad and no play can get to you after a while, so, in the interests of a balanced diet, what follows runs the gamut from Clinton’s boxer shorts to Barbie’s burqa.