First Jihad: Khartoum, and the Dawn of Militant Islam 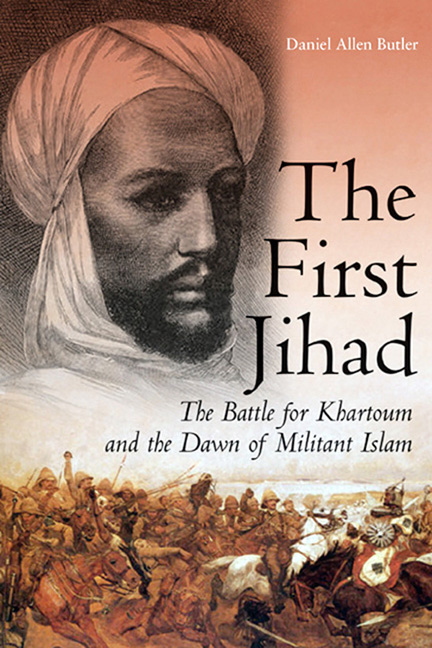 All rights reserved.
No part of this publication may be reproduced, stored in a retrieval system or transmitted, in any form or by any means, electronic, mechanical, photocopying, recording or otherwise, without the prior permission of the publishers.
For additional information please contact Casemate Publishers, 1016 Warrior Road, Drexel Hill, PA 19026.

Cataloging-in-Publication Data is available from the Library of Congress.

MANUFACTURED IN THE UNITED STATES OF AMERICA

who was there
from the beginning

For over a hundred years, the siege of Khartoum has been considered a modern military epic.
It was there, on the banks of the Nile, that a few thousand Egyptian soldiers led by British General Charles Gordon held off the massed hordes of the Mahdi, a Moslem holy man waging
jihad
, for three hundred and seventeen days.
For nearly all of this time the most enduring image of the siege has been that of the indomitable Gordon, with his apparently inexhaustible courage, exhorting the citizens and garrison alike to hold out just a few days longer as help was on the way.

Yet as central to the story of Khartoum as is Gordon, just as vital, and perhaps more so, is the Mahdi.
It could even be said, with considerable justification, that without the Mahdi, Gordon would be remembered as little more than a minor footnote in the history of Victorian Britain.
Of even greater significance is the force that the Mahdi unleashed on the world, one that would grow in intensity and malignancy as the decades passed.
It was the power of militant Islam, with the Moslem religion harnessed as the violent driving force of revolutions, a power to be reckoned with in and of itself, rather than being used, as it had been so often in the past, as an ecclesiatical camouflage for temporal and material ambitions.

The victor of Khartoum, born Muhammed Ahmed ibn-Abdullah, was an
imam
whose messiah-like delusions led him to style himself “The Mahdi”—“The Expected One.” More than one hundred twenty years ago, he united the Islamic peoples of the Sudan in a bloody revolt, denouncing all who did not follow his vision as heretics and infidels.
He declared that foreign influences had corrupted and defiled the true Moslem faith, and proclaimed a
jihad
, a holy war, to purify Islam and remake the “true faith” by cleansing it in a torrent of foreign blood.
The Mahdi’s followers annihilated Egyptian expeditions sent to crush them, and then challenged the military might of the world’s greatest power, the British Empire.
It was at a heretofore insignificant city sitting astride the confluence of the White Nile and the Blue Nile—Khartoum—that this confrontation came to a head, as the British general Charles “Chinese” Gordon defended the city and made it a household word around the globe.

What is startling today about the story of the Mahdi is the immediacy of the mysterious desert mullah to the incarnation of modern worldwide terrorism.
It is a significant and striking relevance, for those dangerous fanatics who seek to impose their vision of Islam on an unwilling world are only echoing the declamations and proclamations issued by the Mahdi more than a century ago.
Militant Islam is not a late 20th-century phenomenon, but rather its roots run deep in certain still-powerful segments of the Moslem world.
To the majority of people in the West—preoccupied through most of the century with global wars, hot and cold—militant Islam first reared its head in the Munich tragedy of September 1972 at the Olympic Games, and peaked with the horrors of September 11, 2001.
Yet the frightening truth is that such terrible acts were steps in what parts of the Moslem world have long seen as an ancient and honorable determination to achieve worldwide Islamic hegemony by any means possible.

Many elements of the story of the siege and fall of Khartoum will seem eerily familiar: the refusal of the governments involved to recognize the threat the Mahdi presented; the influence of the press in shaping public opinion and shifting public policy; the disavowal of responsibility by the government charged with the safety of Khartoum; the search for scapegoats as the specter of failure loomed; the seemingly ponderous and unwieldy military reaction; and above all, the Mahdi’s refusal to be deflected or diverted from what he regarded as his divine calling, no matter what its price in misery and bloodshed.

Some aspects of the story that follows are less precise than many scholars prefer their histories to be, but that is an unfortunately inescapable consequence of the subject, due in part to the vagueness of the available records, and on the Muslim side to the fact that even the most “objective” Arab-written “life of the Mahdi” is more hagiography than biography.
Dates are frequently imprecise (there are, for example, three separate dates given for when the telegraph line between Khartoum and Cairo was cut), spellings of names are often subjected to the whims of the person recording them at the time or at the mercy of translators (in Great Britain “Sudan” was spelled “Soudan” until well into the 20th century), and geographic features are often known by a variety of local and regional names.
Equally frustrating is the simple lack of records and archives from the Sudan for most of the 19th century, and the fact that those that do exist are frequently suspect as to accuracy.

Nevertheless, the story that appears is fascinating, not only for its appeal as a classic Victorian adventure, but because of its chilling immediacy.
Today a powerful Imam in Iraq style his militia “The Mahdi Army,” civil war in the Sudan pits Moslem Arabs from the north against Christian and animist black Africans in the south, and Moslem fundamentalists of the most extreme shade and hue proclaim
jihad
in a desire to “cleanse” Islam from what they perceive to be the corruptions and decadence of the non-Moslem world.
All have roots in the Mahdi’s revolt in the Sudan in the early 1880s, which reached its climax at the city of Khartoum.

The story that follows is a straightforward historical narrative, though its implications and relevance become obvious with the telling.
There are no simple resolutions to the troubles caused by Islamic extremism to be found in the history of the great duel between the Mahdi and Gordon at Khartoum.
What is to be found instead is the reminder, often overlooked but all the more necessary for that, of the truth that militant Islam is a challenge to the very existence of Western society, one that has endured for generations, and one that will continue to strike at any and all that it perceives as enemies, Moslem and Christian alike, until and unless the West and Islam join hands to ensure its eradication.

WE’VE fought with many men acrost the seas,

The Paythan an’ the Zulu an’ Burmese;

But the Fuzzy was the finest o’ the lot.

We never got a ha’porth’s change of ’im:

’E cut our sentries up at Suakim,

An’ ’e played the cat an’ banjo with our forces.

So ’ere’s to you, FuzzyWuzzy, at your ’ome in the Soudan;

We gives you your certificate, an’ if you want it signed

We’ll come an’ ’ave a romp with you whenever you’re inclined.

We took our chanst among the Khyber ’ills,

The Boers knocked us silly at a mile,

The Burman give us Irriwaddy chills,

An’ a Zulu impi dished us up in style:

But all we ever got from such as they

Was pop to what the Fuzzy made us swaller;

We ’eld our bloomin’ own, the papers say,

But man for man the Fuzzy knocked us ’oller.

Then ’ere’s to you, FuzzyWuzzy, an’ the missis and the kid;

Our orders was to break you, an’ of course we went an’ did.

We sloshed you with Martinis, an’ it wasn’t ’ardly fair;

But for all the odds agin’ you, FuzzyWuz, you broke the square.

’E ’asn’t got no medals nor rewards,

So we must certify the skill ’e’s shown

In usin’ of ’is long two’anded swords:

An ’appy day with Fuzzy on the rush

Will last an ’ealthy Tommy for a year.

So ’ere’s to you, FuzzyWuzzy, an’ your friends which are no more,

If we ’adn’t lost some messmates we would ’elp you to deplore;

But give an’ take’s the gospel, an’ we’ll call the bargain fair,

For if you ’ave lost more than us, you crumpled up the square!

’E rushes at the smoke when we let drive,

’E’s all ’ot sand an’ ginger when alive,

’E’s a injiarubber idiot on the spree,

For a Regiment o’ British Infantree!

So ’ere’s to you, FuzzyWuzzy, at your ’ome in the Soudan;

You’re a pore benighted ’eathen but a firstclass fightin’ man;

You big black boundin’ beggar—for you broke a British square!

The city had fallen.

For more than three hundred days it had held out, defended by a slowly dwindling garrison, once numbering some eight thousand but now with fewer than a thousand left, led by a charismatic British general named Charles Gordon.
They were all that stood between the forty thousand men, women, and children of the city and the massed rabble that called itself an army, more than a hundred thousand strong, that had pledged itself to their destruction and death.

Completely Consumed (Addicted To You, Book Eight) by Covington, Lucy
The Flood by &#201;mile Zola
Growing Up Amish by Ira Wagler
Tamed by the Billionaire (The BAD BOY BILLIONAIRES Series) by Angelo, Judy
1958 - The World in My Pocket by James Hadley Chase
The Forest House by Marion Zimmer Bradley, Diana L. Paxson
When I'm With You: Part Eight: When We Are One by Kery, Beth
Roll with the Punches by Gettinger, Amy
Just One Day by Gayle Forman
Bailey’s Estes Park Excitement by Linda McQuinn Carlblom