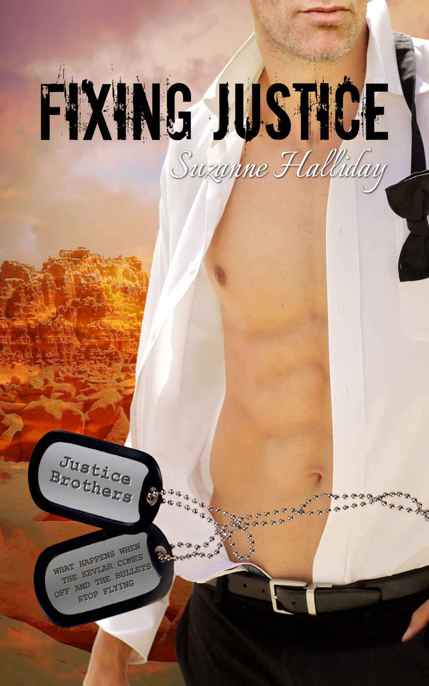 This ebook is licensed for your personal enjoyment only.

All Rights Reserved. No part of this book may be reproduced or transmitted in any form or by an means, electronic or mechanical, including photocopying, recording, or by any information storage and retrieval system without the written permission of the author, except where permitted by law.

Formatting By
Self Publishing Editing Service

This book is dedicated to my family

My fabulous and hilarious daughter

My grandchildren who give new meaning to the expression YOLO

Thwack
.
Clink. Thud.
“Aw, suck my balls, Cam!” Draegyn yelled while clutching his crotch with a wicked laugh as his last two horseshoes made contract with a metal stake in the ground about forty feet away in a sand pit that was all of Afghanistan.

“Fuck you Drae!” Cameron yelled back heartily. “You totally pussied out last week when the Frisbees were flying fast and furious with that weak ass excuse that your neck ached. I think you set me up with all your wah-wah crybaby shit so don’t go thinking this means anything!”

The two men grinned and flashed each other the finger as they indulged in a little down time at their austere combat base camp deep in the mountains of Afghanistan. All around them sand bags stacked high as a shield against every imaginable type of attack while overhead an American flag hung limp from it’s standard in the stagnant air of a blisteringly hot day.

Their special forces compound was a rag tag set-up of tents, combat housing units, tin siding, barriers, sand dusted tables, lopsided chairs and car backseats that had been thrown around an area where the men gathered to forget about where they were and what they were doing.

Dressed in backward baseball caps with sweaty bandanas around their necks and standard issue green military t-shirts that the sleeves had been ripped from, Drae and Cam were fending off the long stretches of isolated boredom that descended upon their team in between missions.

Dressed in a pair of khaki ACU pants covered in Velcro pouches with the legs tucked inside a pair of hi-tech boots covered in the desert sand that seemed to cling to everyone and everything, Drae had discarded his tactical vest on the ground nearby. Dark sunglasses shielded his eyes from the relentless sun that had done a number on his fair coloring making him look like a piece of burnt white bread.

In tip-top physical shape after years in the military, muscled arms sporting a deep tan presented a tattoo-wrapped bicep that matched the one Cam had. Together as brothers-in-arms for the last five years, they were men of the Justice Squad. A gruff, no-nonsense special ops team who had been sucking in the arid sands of the God-forsaken place they had been in for far too long.

Shuffling across the hard-packed sandy ground, they stooped to retrieve their horseshoes, and continued to rib each other relentlessly about all manner of things that brought their manhood into question. It was a lighthearted moment in an otherwise deadly serious existence.

The low
woof-woof
of an approaching K-9 grabbed their attention as one of their squad newbies, a soldier they nicknamed ‘The Kid’, approached with a serious looking German shepherd on the end of his tether.

Everyone liked The Kid, although at twenty-five and after several long tours in various hot spots around the region, he was hardly considered a greenhorn. A communications expert who spoke several native dialects and handled his K-9 with adroit skill, he’d impressed even the most battle hardened of their squad. He wasn’t standard military. Not exactly. Most likely he was CIA or one of the elite, super secretive counter-terrorism operatives deployed throughout the region. One of the norms in this corner of the world was that these men didn’t ask questions of each other and rarely, if ever, used their real names. It was as if the time out of place nature of what they were ordered to do required a completely different mind-set than the one they’d relied on in the real world.

“Hey Kid, what’s up with McLain? He seems a bit tense this morning,” Drae asked while he studied the dog on high-alert, pacing this way and that, at the end of the tether.

True to a soldiers’ habit for creating nicknames and catchy terms for nearly everything, this particular shepherd had been named after the Bruce Willis character in
Die Hard
because he had a small bald spot on top of his head. Their special tactical squad was even called Justice after the Justice League, the Stan Lee created superheroes operating out of a hidden cave with a top-secret mandate to take on all villains who threatened the American way. Seemed oddly fitting in some perverse way.

Tugging on the tether to bring the dog under heel, The Kid shrugged, directing his reply to both men. “I don’t know, Sirs. He got all antsy earlier at the south checkpoint but none of the other canines reacted so maybe he’s just having a bad day.” When the animal finally settled at his feet, tongue lolling out of his mouth as he panted and, ever watchful in his capacity as a bomb-sniffing guard dog, all three men studied the brown and black shepherd with keen interest.

Never taking anything for granted or at face value, each mulled private thoughts as eyes, alert and ever-vigilant, surveyed the scene around them looking for anomalies that might explain the dog’s tension. Improvised explosive devices and suicide bombers had become the enemies preferred
fuck you
method when striking the coalition forces. Attacks had been happening more and more frequently, and in unexpected places, coming closer and closer to their secured areas.

Turning his attention away from the dog he had at his side, The Kid held his M-16 rifle protectively across his chest. “Hey, did you hear about Team Matrix? They were doing an overnight near the border when one of those motherfuckers blew a device on the convoy. Killed six, including an imbed from the BBC.”

Hearing that bit of news, Cam and Drae looked at each other behind the dark lenses of their sunglasses.
Fuck.
Talking about body counts was usually immediately followed up with a swift change of subject that Draegyn was quick to provide.

“Have you been over to HQ yet, Kid? The Major has been holed up there for way too long with a bunch of heavy-vested pussies. Oh, my bad - I mean
politicians
who were making his life hell, last we heard.” The disdain Drae felt for those so-called public servants was dripping from every word with special emphasis on the
pussy
.

Alex, the third wheel and most senior member in their long association, was a brilliant tactician with the body and brawn of a battle-hardened warrior. He was spending way too much time these days holding the sweaty hands of the never-ending stream of nervous politicians and state department yahoos who flew in under cover of darkness. After a dog and pony show visit, they would high-tail it back to the safety found on U.S. soil so they could whip up their constituents and department heads with dramatic tales about the sights and sounds of life in a forward operating base in the middle of what had become a never-ending war. All that PR shit wasn’t exactly what Alex thought he’d be taking on when he was promoted last year.

“I saw Badirya headed that way earlier with Asef in tow. He asked where you were, Lieutenant,” The Kid said in Cam’s direction.

Asef and his mother, the lovely Badirya, were fixtures in their compound. Asef was maybe nine or ten years old and accompanied his mother nearly everyday when she came to work as a translator and secretary in the HQ. The youngster was bright-eyed and extremely personable. He loved all things American with a special penchant for anything and everything connected to Batman.

Drae cast Cam one of those knowing looks that bordered on a leer before chiming in with, “You’ve been spending quite a bit of time with the lovely widow and her son, Cam. You find a way underneath that hijab yet, dude?”

Blind Arrows by Anthony Quinn
This Year's Black by Avery Flynn
Murder in the Collective by Barbara Wilson
What Doesn't Kill You Makes You Zombier by Wade, Allison
White Moon Black Sea by Roberta Latow
My Own Revolution by Carolyn Marsden
I Knew You Were Trouble: A Texas Kings Novel by Soraya Lane
City of Scars (The Skullborn Trilogy, Book 1) by Montano, Steven
Ghost in the Wires: My Adventures as the World’s Most Wanted Hacker by Mitnick, Kevin, Steve Wozniak, William L. Simon
Kazuo Ishiguro by When We Were Orphans (txt)