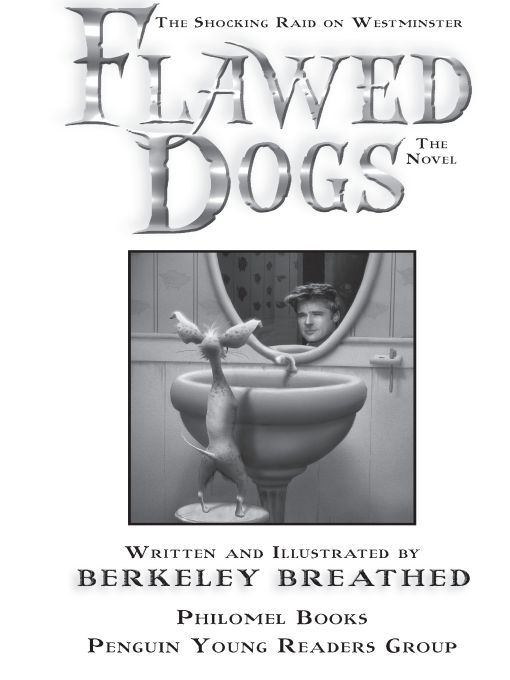 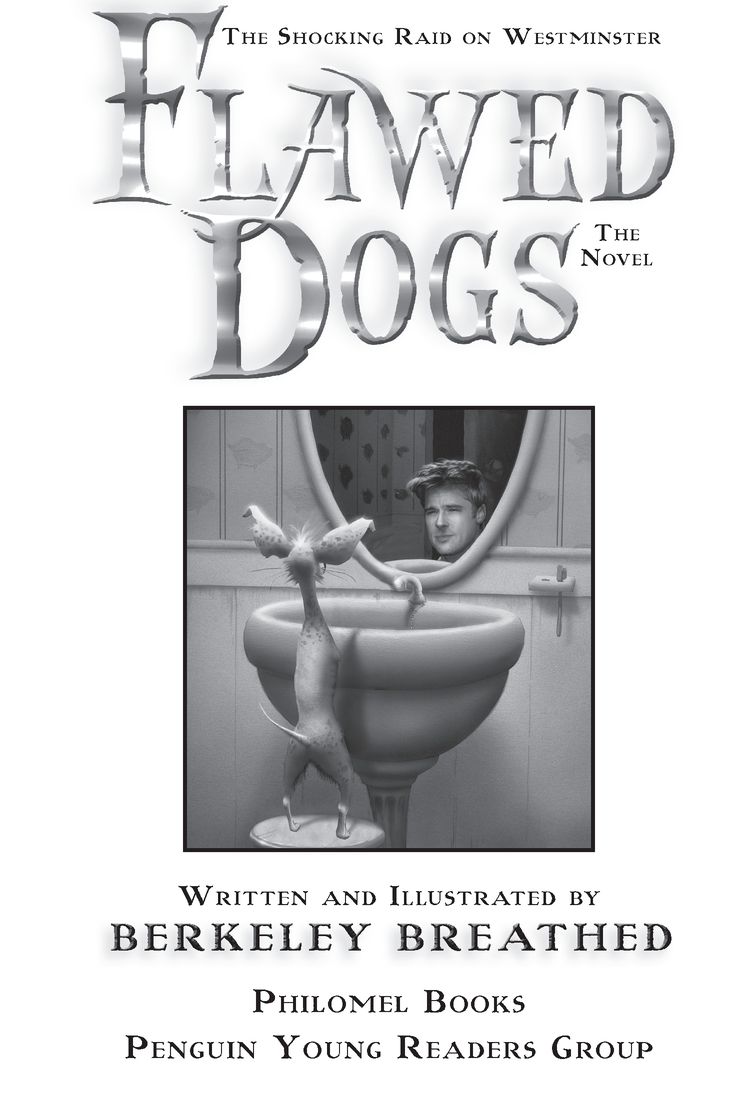 All animals dream.
But only dogs dream of us.
AUTHOR’S NOTE
The recently released
Congressional Report
on the Westminster Dog Show Riot is rubbish.
The source of that day’s injuries and property destruction is not so easily written off to the violent reaction to “a panicked poodle peeing in the punch,” as President Obama famously said when trying to calm the anxious nation.
This country has prided itself in facing its most traumatic events with the courage that comes from the unblinking truth, no matter how shocking.
After months of careful, courageous research into the lives of those responsible for this disaster, I am happy to deliver the true story to you now.
BERKELEY BREATHED 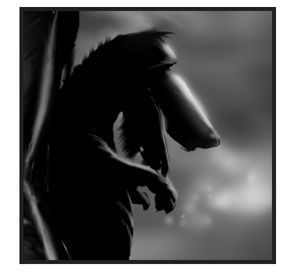 SCENT
The Rough-Handed Man carried him through crowded rooms empty of heat and kindness. The hands were shaking, but not from the cold. He became aware that the man was whispering to him: “It’s our turn, little buddy, little tough guy. I know you can do it. I need you to do it. You’re not so big, but you got a big stubborn heart bigger’n all of . . . of . . .”
The voice paused.
“Well, it’s bigger’n mine.”
He was small for a dachshund and was being held upright like a fat salami on end. His bony spine lay against the man’s chest, his front feet bobbing before him. His broken rib required that he be carried this way. His fourth leg was not a leg at all but a steel soup ladle taped to his stump.
He curled his tongue up to lick his nose, dry and cracked from the cold. He was aware of being carried past more men—all mutts and mongrels, no purebreds—bustling and shoving about him with arms tattooed, grimy, wet.
Human-being smells enveloped him like a foul blanket: Smoke. Sweat. Chewing tobacco. Alcohol. Roasting meat.
And money.
The human beings’ money smells of all those other things.
Among all the stuff they love so—cars, kids, wood floors, driveways, socks, hair, teeth, feet, plums—only their money they don’t wash,
he thought.
They should.
And this time, it smelled of something else.
Something new.
He couldn’t identify it, this scent so unfamiliar. Long ago in a different life he could put a nose to the June breeze and tell you that the marigolds in the North Meadow had bloomed and new paint was on a fence somewhere and the furry-shoed Fat-Fingered Lady three miles down the road had just pulled a blackberry pie from the oven, sprinkled it with nutmeg and then farted. 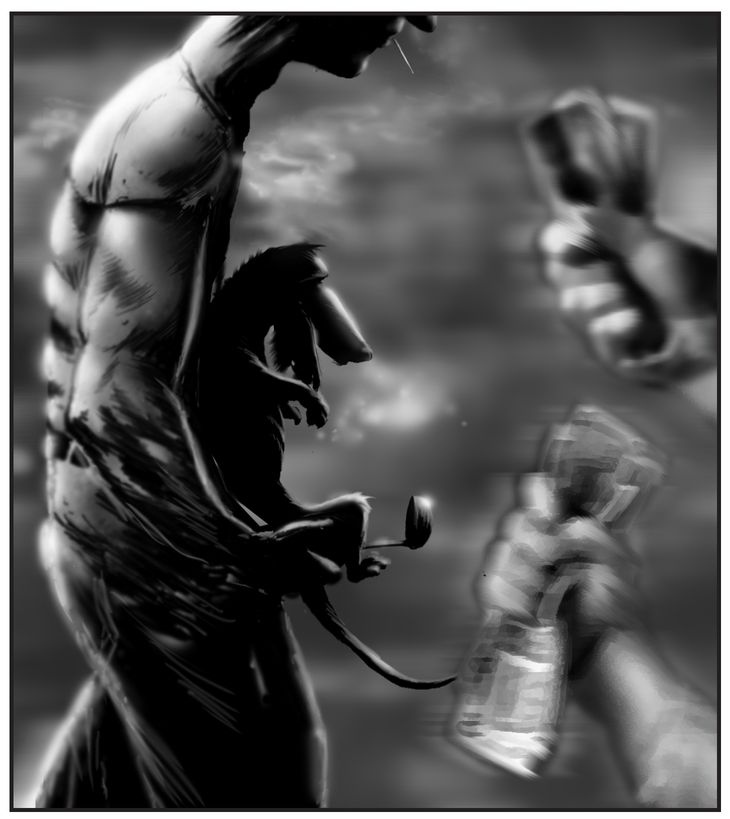 But here, now, he didn’t know this new scent. He knew he didn’t like it. He also didn’t care. He was past caring about anything. 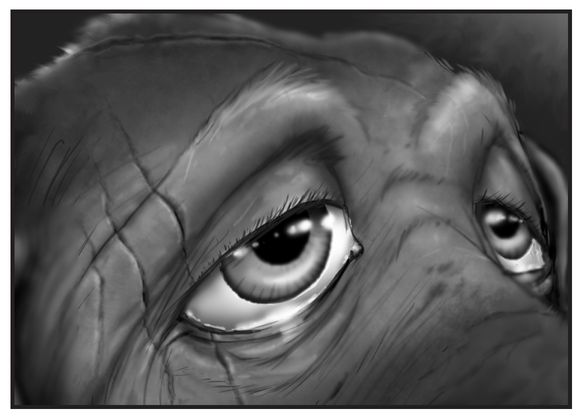 The man bore him through the jostling crowd, down some stairs, into more darkness, before entering a large space with a soaring ceiling filled with more men in shadow that he could not see but he could smell. And hear.
They shouted and argued and spoke harshly and waved paper in their hands. There it is again. Money.
He was lowered over a plywood wall formed in a circle, down farther until he felt dirt below his three paws. Dirt. At the bottom of a room in a building at the edge of a concrete city, how strange to feel dirt.
He would have thought about this more if he hadn’t raised his eyes to see fifty pounds of bull terrier opposite him, five body lengths away, both front feet lifted off the ground. A reddening human hand held the collar and much of the huge beast’s weight as it strained forward, the muscles of his neck bulging and looking to explode. Pulses of hot mist shot into the frigid air from a gaping pink throat: a slobbering murderous locomotive building up steam. The eyes were unblinking and wild and fixed forward on a single point opposite the terrible mouth.
“You want to kill me,”
the dachshund said aloud.
“I do,”
said the other dog.
“Isn’t there anything you’d rather do instead?”
The big bull terrier stared at him, thinking hard. He’d never considered that question.
But the dachshund understood now why he was here, in this dirt, in this pit.
He looked up and found the face of the Rough-Handed Man staring down at him, looking crazy scared. “Ya gotta fight, little buddy!”
Fight.
The man might have just as well said, “Float.” Or, “Fry up a haddock.” Better would be, “Faint.”
He backed up until the wood planks found his tail, which folded below his rump as he pushed back, back.
At that moment he also knew what that new smell was. He looked down and saw it, a dark crimson ribbon woven amidst the filthy dirt and food wrappers.
ADS
15.4Mb size Format: txt, pdf, ePub

Dancing With the Devil (The Devil #2) by Heather C. Myers
The Mince Pie Mix-Up by Jennifer Joyce
The Cat Next Door by Marian Babson
Why I'm Like This by Cynthia Kaplan
The Book of Evidence by John Banville
Vampires and Sexy Romance by Eva Sloan, Ella Stone, Mercy Walker
Psychic Visions 08-Now You See Her... by Dale Mayer
The Traitor by Kimberley Chambers
Tempted in the Tropics by Tracy March
Shadowrun - Earthdawn - Mother Speaks by kubasik