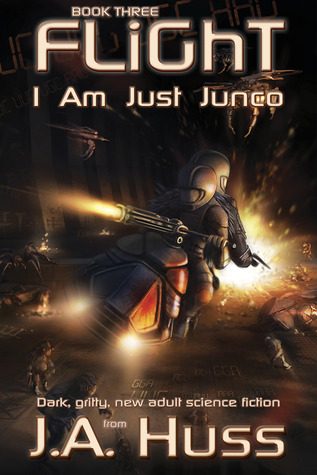 I Am Just Junco, Book Three

Other books by J.A. Huss

Range (I Am Just Junco Book 4)

Lies and Luck, they'll both get you in the end.

There's a new twist on an old prophecy and this one brings the End of Days. Junco must make a choice – human or avian? Only one race will survive.

Lucan has secrets and the lies are flowing like a mountain river during spring thaw. But he needs Junco to cooperate just a little bit longer or it all falls apart.

The Siblings on Earth are waiting for the Seventh to return and pull their clutch together. But Earth has secrets too – secrets that change everything.

Junco has survived against impossible odds, but the cost of survival is higher than she ever imagined. Luck is about to catch up with Junco Coot and her debt must be paid.

The water comes across my night vision-goggles as a smooth green sheen. I hesitate, look behind me, then in front. My ears strain to hear something. Anything. A clue that will help me decide which way to go. If that water is safe to cross, or if I should turn and run.

I have no idea what to do. I've never been in this cave system before.

The sloshing of water pulls me from my fog and I back up slowly, my hands reaching out behind me, searching for the cave wall I know is there.

I hear a hiss from behind me but the owner of the vocalization is not on screen when I pivot. I turn my head to try and see each side. I hate these goggles, they limit my field of vision.

But I can't take them off or I'll be blind.

I want my dad.

I want to cry.

I want to run.

I want to lie down and die.

But I can't do any of those things. I have to complete the test, win the fights they've set up for me, or I'll never go home again.

I swallow and concentrate on the sheen again, then take a giant breath of air and let it out so slowly even my ears cannot hear it escape. I walk forward. Towards the small running stream. And I prepare myself for the possibility of a fight.

My boots enter the water and I quickly cross without incident. It's a small reprieve from danger that I welcome with an inner smile, but I only get a few paces beyond the stream when I see the shine in my night vision.

I swallow and watch it pace back and forth in the cave entrance. My hand automatically reaches for my SEAR but Matthew took it away. I never get a SEAR on test day.

The nightdog waits for me to make the first move but I'm patient. I can wait too. It paces, snarling. I can see the saliva dripping off its jaws as it snaps its teeth in my direction.

Why isn't it attacking me?

And then I hear it. The small whimper of pups. Nightdog bitches are very protective but if they have pups they are also very hesitant to leave them. They wait for the danger to become immediate.

I back away and swallow, then look behind me.

Think, Junco. Dad never sends you into a test without a power. But I haven't seen him in weeks and I won't see him ever again unless I make it out of the tunnels today. If he gave me a power I never understood what it was.

I continue backing up and have to backtrack across the stream again. I simply cannot go forward. The bitch has claimed that cave entrance and I have nothing on me but a set of throwing knives and one medium-length dagger.

What was the power, Junco?

I don't know. Dad gave me a few gifts when I left. A stupid workbook with pages of puzzles in it to keep me busy during the ride into the Stag. Some hair barrettes. A t-shirt with a horse on it. A pack of gum. A new bathing suit. A real paper book with pictures of the cave dwellings in Old Peaks. A kiss goodbye.

None of this stuff seems helpful at the moment. But it has to be one of them. It has to be.

I go through each one again. The bathing suit was a one-piece with pineapples on it. We're going to Hawaii for birthday week before I move out to cadet school in Council 1. Assuming I live through this test and make it to thirteen, that is.

I hear another sound and press myself up against the wall. I see a mutant dragging itself farther down the tunnel and my heart begins to beat wildly. I shut that down quick. If my alarm goes off I'm screwed.

The kiss goodbye was nothing. Just the same old kiss I always get. No secret words were passed, no meaningful squeezes of my arm or anything. Just a stupid kiss.

The barrettes have nothing to do with any of this. He was complaining about the hair being in my eyes and we stopped at the gas station to get some. I have one in right now. I take it out and look at it, then drop it on the ground. No. This is just a barrette. No secrets hidden in there.

The gum was chewed loudly as I played the piano the first week I was at camp. So if that was my power, it's gone now.

I have the t-shirt on. But I've looked at every inch of thread on this thing and there is no secret power woven into the cloth.

The book is back at camp. I read it. They're interesting, those cave dwellings. And this is a cave, so that might have been it. But I scoured it from cover to cover and there was no hidden power that I could see.

The workbook was spiral-bound paper. Filled with word puzzles and pictures. Mazes and crosswords. Word searches. I did every single one and there were no secret messages in there either.

I hear the hissing again. This time it's loud. Not a slither mutant. The kind that has legs. I close my eyes and will myself not to cry or whimper.

The scream jerks me back to action. I open my eyes and it's covering the distance between us at full speed. I withdraw my first knife and fling it. It sticks in the shoulder and even though the mutant is big, much bigger than me, it stops short and paws at the blade to remove it. But my blades are barbed. It can try and remove it, but it will remove a section of skin and muscle as well.

It paces about ten feet in front of me. My hand is already holding the second knife, but then I hear the second mutant come around the far corner and I panic.

I run back towards the nightdog and the hunting instinct in the mutants takes over and they give chase. My feet pound through the water, splashing and making enough noise to wake the dead so the nightdog is waiting for me.

Think, Junco. What is your power?

I throw the second knife and it sticks in the bitch's eye, she goes down wailing in pain and I slip past her and the third knife is in my hand in case this is a birthing den.

My luck holds and there are no more bitches.

I run, my breath heavy enough to partially drown out the thundering footfalls that follow me.

I turn, then turn again. This tunnel system is like a maze and I begin to panic. I'm never going to get out of here!

I burst into a larger tunnel and slip in the mud, recover, and then fall forward. The mutants are on me before I can even think. I roll, stick the first attacker in the belly and drag the blade upward until the blood gushes out all over my face.

I throw my legs up and kick it off me as the second one flies in for another try. It hits me in the chest and I go reeling backward in the mud, my fourth knife careening out of my hand and hitting the stone wall off in the distance. I reach for the dagger but the jagged teeth find my leg and I scream.

My hands reach out to grab the thing by the hair and I smash the tender underside of the protruding jaw down onto my kneecap. The jaw splits in half inside the skin and I hear a sickening crack as the mutant screams in pain. I push it off and scoot backwards, waiting to see if there's another one coming.

I scramble to my feet and look around. The tears want to come out, but I push them down and pivot, trying to get my bearings. I'm totally lost.

Junco, you know your power, think!

I see another tunnel on the far side of this little cave and I walk towards it, my heart still beating quickly, but not at a dangerous level.

I hear the nasal growl of a prairie lion up ahead and this time I cannot keep the whimpers down.
Oh, God. Please help me. Please, I'm going to die here. Please.

What is your power?

I can kill the lion.

Yes, you'll have to, that's not an option.

I get my last knife out.

The lion is not in the tunnel I want to go through, it's off to the side. It sees me but it's eating a half-decayed mutant. Does it want a fresh meal? Does it want to hunt? Or eat?

I inch past it, pressed up against the ragged wall of the tunnel, and I watch the predator's eyes as it changes its mind about the rotting flesh on the floor below.

I bolt and run into the cave and I'm immediately presented with decisions, the tunnel twists and turns, new entrances appear and I run past or duck into a new pathway, oblivious to where I'm going or where I came from.

I'm still booking it, the lion behind me a few twists and turns, but definitely still behind me. And I smile. It's like a maze in here. I bring the mazes from the workbook up in my head and go through the titles of each one.

The lion catches up and grabs my foot.

I kick it off and stab it with my last throwing knife, pulling the knife up and twisting it inside the body in a last desperate attempt to save my own life. I hear the rip of skin and muscle and the lion drops off, screaming.

Hawkmistress! by Marion Zimmer Bradley
The Cat Who Talked to Ghosts by Lilian Jackson Braun
Date with a Sheesha by Anthony Bidulka
Coin Heist by Elisa Ludwig
The Scottie Barked At Midnight by Kaitlyn Dunnett
My Guardian Knight by Lynette Marie
The Future Has a Past by J. California Cooper
It's Always The Pretty Ones by Howard, Vonda
Take Me: A Stark E-Novella by J. Kenner
Stone Blade by James Cox