Read Flowers in a Dumpster Online

Flowers in a Dumpster 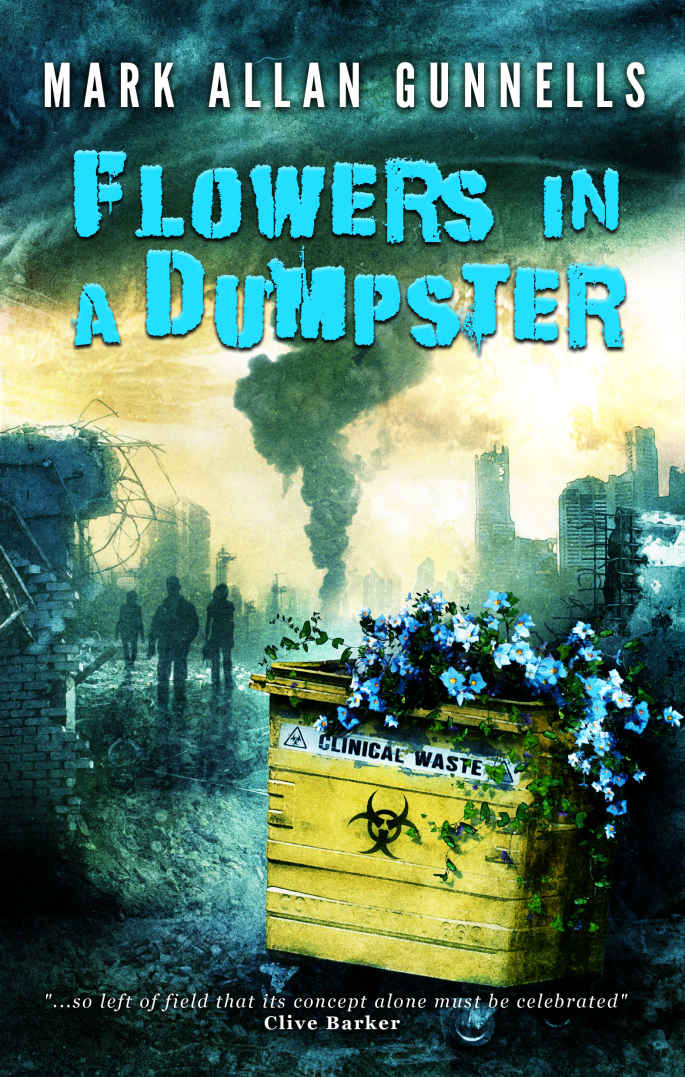 This is a work of fiction. Names, characters, businesses, places, events and incidents are either the products of the authors’ imagination or used in a fictitious manner. Any resemblance to actual persons, living or dead, or actual events is purely coincidental.

No part of this publication may be reproduced, stored in a retrieval system, or transmitted in any form or by any means, without the prior permission in writing of the publisher, nor be otherwise circulated in any form of binding or cover than that in which it is published and without a similar condition including this condition being imposed on the subsequent purchaser.

“The Support Group” was originally published on the site deviantart.com as the 1st runner up in Clive Barker's “Men of the City Contest” in December of 2014. “Transformations” appeared in the now defunct online e-zine The Harrow Vol 11, No 9 (2008). “The Last Men on Earth” was self-published as a digital short in December of 2011. “Welcome” appeared in The Harrow Vol 9, No 2 (2006). “Welcome Back” also appeared in The Harrow Vol 10, No 7 (2007). All the rights for these stories have reverted back to the author. All the rest are original to the collection.

THE LAST MEN ON EARTH

SURVIVAL OF THE FITTEST

A dark-skinned man, wearing dusty jeans, bolted out of the doublewide mobile home shotgun in hand. “Where?”

Sadie pointed down the dirt road to the approaching figure. Dust billowed around the distant stranger, a tall, emaciated white man dressed in rags. He moved quickly, weaving slightly.

“Get inside and watch Zeke.” Reluctantly, Sadie did as she was told and disappeared inside with their son. As the silver-haired stranger drew closer, Miguel lifted the shotgun and pointed it at the man. “Just keep
walking
, amigo.”

The stranger held out two empty, bleeding hands. “Please . . . if you could just spare a drop of water.”

“Got nothing for you here expect some buckshot. Just keep moving. We don’t want any trouble.”

“I don’t either. Trust me, I’ve had enough trouble.”

The stranger turned, exposing the left side of his face. Miguel gasped at the sight of those ugly red burn scars. The left ear was singed off completely, and so much scar tissue surrounded the left eye Miguel was certain the stranger couldn’t see out of it. “What happened to you?”

“A year and a half ago I was in what used to be New York, roasting a rat I managed to catch over a fire I built in an old trash barrel. A gang of guys ambushed me. It wasn’t enough just to take my meal and shoes, they stuck the side of my head in the flames.”

“Well, we’ve all got sob stories,” Miguel said in a neutral tone.

“We’re all out of mercy here.”

“Miguel,” a voice hissed from behind. He turned to see his wife standing in the doorway.

“Woman, I told you to stay inside.”

“
Woman
? Don’t go all alpha male on me. We have enough to share a meal with someone in need.”

“I’m not a fool, Miguel. Look at him. It’s obvious he doesn’t have weapons, and he’s so frail. Even Zeke could take him in a fight.”

Miguel turned back to the stranger, the gun never wavering. “What are you doing so far off the beaten path?”

“The cities aren’t safe. I learned that the hard way. Scavengers and thugs have taken over. I figured ‘off the beaten path’ would be safer.”

“That’s why we’re out here, but it’s not without its dangers. Still have to protect what’s yours.”

The stranger held out his hands again. “I’m not a threat. I know you’ve got no reason to trust me, but keep the gun on me the whole time. I’m fine with that. Please, just a bit of sustenance, a place to rest for a while, then I’ll be on my way.”

Sadie made the decision by walking past Miguel and taking the stranger’s arm. The man stumbled, and fell against her. “Miguel, put that damn gun down. Get over here and help me get him inside.”

He growled in frustration but leaned the gun against the side of the mobile home. He took the other man’s shockingly frail arm. The stranger kept thanking them as they helped him up the steps and through the door. He collapsed into a torn recliner that bled stuffing from several rips. Even though his skin was hot to the touch, he shivered.

Miguel stepped back outside and retrieved the shotgun, training it on the stranger once more.

Sadie shot him a venomous glare. “Is that really necessary?”

“He said I could keep the gun on him.”

“It’s fine,” the stranger said in a quavering voice. “I’m just grateful to be out of that sun, even for a minute.”

He was out of the sun, true, but without electricity to run air conditioning or a fan, it was just as hot inside as out. Miguel found it even more stifling in the mobile home, which was why he spent most of the day outdoors, working in the garden or down at the lake.

“Stop calling me
Woman
like that or I’m going to slap your face,
Man
. If we can’t show a little kindness and charity then we’ve truly ceased to be human. Is that what you want for our son, to lose his humanity?”

Miguel didn’t have an answer, so he stepped back and let Sadie take over. But he did not lower the gun.

Zeke came out of his room and entered the living room cautiously, keeping his distance from the stranger. He looked afraid but also curious. It’s been years since he’d seen anyone other than his parents. He was only twelve, but in many ways he was already a man. This new world was not a place for children.

Sadie said the boy’s name three times before he tore his eyes away from the stranger and looked at her. “Run down and fetch some water for our guest.”

Sadie ignored him and clapped her hands, causing Zeke to jump. “Hurry.” Zeke nodded then disappeared out the door. Turning to the stranger, Sadie said, “I’m going to fix you a little something to put in your belly. If you really haven’t eaten in a week, it’s best not to gorge yourself. You’ll only make yourself sick. We do have some fresh veggies from the garden, though. I’ll make you a small salad.” She turned her eyes to her husband. “You, behave yourself.”

After Sadie left through the archway, heading into the kitchen area, Miguel took a seat on the sagging sofa directly opposite the stranger. He placed the gun across his lap, but his grip remained firm.

The stranger had closed his eyes. Miguel assumed he was asleep until the man suddenly said, “I am sorry for intruding on your family this way.” Miguel grunted in response. Opening his one good eye, the stranger lifted his head slightly but allowed it to drop back against the cushion for lack of strength. “So are you folks from this area originally . . . I mean, before everything went to hell?”

“I don’t really care. Let’s just get something straight here. We’re going to give you some water, some grub, then you hit the road. This is a rest stop for you, nothing more. We’re not buddies.”

“We’re both from Texas, though Miguel’s family is from Mexico originally,” Sadie said, returning with a plate of sliced cucumber, tomato, carrot, and onion. “Sorry, we don’t have anything in the way of salad dressing.”

Edwin smiled only for a second—the effort to raise the corners of his lips seemed monumental. “That’s quite alright, ma’am.”

Edwin speared a slice of cucumber with the fork and tried to bring it to his mouth. His hand shook violently, making it difficult for him to hit his mark. Without a word, Sadie sat on one of the chair’s arms, took the plate from Edwin and proceeded to feed him as if he were a young child.

Zeke returned at that moment, carrying a slightly crumpled plastic water bottle. Sadie motioned the boy over. At first he seemed reluctant and glanced at his father. Miguel begrudgingly nodded. He walked slowly over to the recliner and held the bottle out.

With another of those faint, transitory smiles, Edwin took the bottle. “My God, it’s actually cool.”

“Miguel came up with a system,” Sadie said with such genuine pride Miguel smiled despite himself. “We get the water from the lake about a half mile behind the house, boil it, then we bottle the water and keep it in a net that’s submerged in the lake itself. It doesn’t keep it ice cold or anything, but keeps it cool.”

Edwin took a deep swallow of the water. He coughed and sputtered, prompting Sadie to pat him on the back a few times. When the fit passed, he took a few more tentative sips. “This is like a little bit of Heaven in a bottle.”

Zeke sat next to his father, his eyes glued to the stranger. Miguel couldn’t really blame him. Not only was it someone new, the scaring on the left side of the man’s face made it hard to look away.

“So where are you from, Edwin?” Sadie asked as she continued to feed him the vegetables.

He chewed methodically, swallowing with some trouble and washing it all down with the water. “Well, I was born and raised in Ohio, but I was living in the North East when everything went down.”

“And what brought you down south?”

“I spent last winter in what had once been a Buddhist monastery in West Virginia. It was rough. I figured a warmer climate would do me better this year.”

Sadie nodded and continued feeding him until the plate was clean, after which she stood and looked over at her husband. “Come help me in the kitchen.”

“I really think I should—”

“You should really come help me in the kitchen.”

Before Miguel could say anything more, Sadie turned and headed through the archway.

Miguel sighed and handed the gun to Zeke. They’d started teaching the boy how to use firearms three years ago. In the distant past Miguel had abhorred guns, been a proponent of gun control legislation. He would have considered allowing a twelve year old to handle a weapon akin to child abuse, but he lived in a different world now. Being able to defend yourself was an unfortunate reality they all had to accept.

Murder on Location by Howard Engel
Blue Plague: War (Blue Plague Book 6) by Thomas A. Watson
Bartholomew Fair by Ann Swinfen
How to Crash a Killer Bash by Warner, Penny
SHIAM Conspiracy- Book 1 by Joseph Heck
How I Became a North Korean by Krys Lee
Louise M Gouge by A Suitable Wife
What Happens in London by Julia Quinn
Alice by Christina Henry
Hell on Heelz (Asphalt Gods' MC) by Mitchell, Morgan Jane