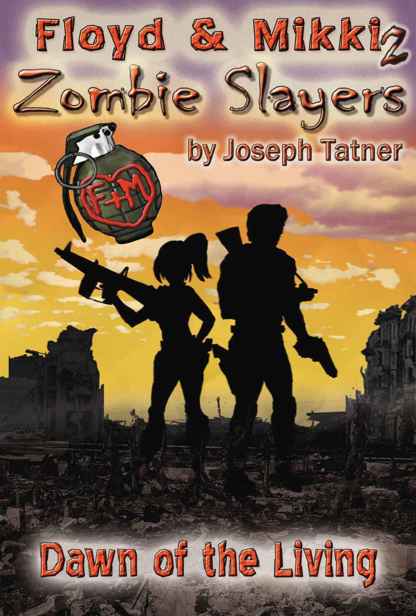 Dawn of the Living

Don’t miss the first book in the series:

Love should be explosive!

“Floyd and Mikki: Zombie Hunters
is an amazingly funny book, a zombie book that is so totally different from every other one on the market. I couldn't help but laugh out loud at their antics. Joseph Tatner has a brilliant turn of phrase, a fantastic aptitude for telling a story and is very funny with it. Amazing story, great characters and a really good plot all combine to make this an explosive and hilarious novel. Despite all of the zombie movies out there, this is one I would love to see on the big screen.”

“What a great read! Floyd and Mikki is by far the best zombie book I have ever read. The unlikely couple that pair up and bring us laughs with lots of hand grenades and humor.”

“It's action-packed and filled with humor. I love a strong female character and Mikki fit the bill. This was a fun read that kept me entertained and turning the pages. I was so happy to read that there will be additional books.”

“The only reason I downloaded was because my dog's name is Floyd and it sounded like a fun read. I was surprised how much I loved it! Great story, suspense, humor, love and zombies! Can't wait for the next book!”

All rights reserved. Except as permitted under the U.S. Copyright Act of 1976, no part of this publication may be reproduced, distributed, or transmitted in any form or by any means, or stored in a database or retrieval system, without written permission.

This book is a work of fiction. Names, characters, places, and incidents are the products of the author’s own warped imagination or are used fictitiously. Any resemblance to actual events, locales, or persons (whether living, dead, or undead) is purely coincidental. Nothing in this book is intended to disrespect or disparage any person, place or thing. Knowledge of military hardware and development is based on open source material and this book reveals no known state secrets. Any similarity of the events in this book to an actual zombie apocalypse, present or future, would really suck.

Floyd and Mikki walked slowly away from New California Haven. They were in no hurry. Their social calendar was empty.

They had no place to go, no place to stay, and no idea of what lie ahead. They were low on ammo with no transportation, no maps, and no plan. They had little food and water and were lost in a city that neither one had ever seen before. And yet, they were perfectly happy. They were perfectly calm. Neither one had even the slightest hint of concern. They had stared Death in the face, and kicked his bony ass.

Each of them had started out the same way two years ago: lost in a world gone mad with nothing but their wits to survive. No friends to turn to. No one to trust. Hell, no one left alive! Zombies lurked around every corner, determined to enlist them into the ranks of the Undead. Humans gone insane or driven by power and greed would murder you for your boots. Yet they had survived. Each one…alone.

They had just lost nearly everything they had built over the previous two years, but they had two distinct advantages this time out. First, they had the kind of wisdom that only comes from experience. Reality is a harsh teacher. Second (and more importantly) they had each other, and they had proven to be quite a formidable team.

Downtown Long Beach wasn’t as populated as Los Angeles. The buildings weren’t as tall and or as closely crammed together, but there were still thousands of places to hide and thousands of creepers to hide in them.

Floyd and Mikki came to Ocean Boulevard and made their way through a little park to a long strip of sidewalk on the beach. The two followed the cement path as it stretched to the East as far as they could see. The sound of waves beating up the sand on their right assured them that any threat was far away. Zombies weren’t big on laying out at the beach to get a suntan.

“Hey, Floyd. You think they’s still watchin’ us on them satellites?”

“I reckon. We’re their number one Reality TV stars, remember?”

“Good. That’s what I thought.” Mikki raised her hand and gave her middle finger to the sky.

Floyd laughed. “You really are somethin’ else. You know that?” Then he gave a little wave to the sky (using all five fingers).

They continued along slowly, inside hands holding on to each other and outside hands clutching their shotguns, Bonnie and Clyde. The only truly safe haven they were ever likely to find slowly receded into the distance as they walked farther and farther away. The two Zombie Hunters had traded security for an unknown future. They had abandoned all hope of a normal life for a zombie-filled, death-around-every-corner, God-knows-what-we’ll-run-into-next, insane, upside-down world. Somehow, it all seemed just right.

“I told you, you can call me Michelle.”

“I know, and I will. When the time is right. But you’ll always be Mikki to me.”

“How come you never screamed at me for blowin’ up yer truck?

“Come on, Mikki. We both knew it wasn’t goin’ nowhere once that transmission snapped. Besides, it didn’t seem like we were gonna live long enough for it to matter.”

“Hey! No stealin’ my line! But we made it anyways, didn’t we? Guess we really shoulda thanked them NCH guys before we left, huh?”

“Oh, I’m sure we’ll see them again. I don’t know where, and I don’t know when, but they ain’t gonna forget about us. Besides, I’m thinkin’ we should head back to Emerald Valley Campground. Them folks will need help gettin’ here.”

“Hell, Floyd, we don’t even know how
we
got here. We almost didn’t.”

“Yeah, but however we get there from here is how we’ll get them back here from there.”

“I don’t know what the hell you just said, but whatever.”

As the city started closing in on their left, the two kept to whatever open areas they could find, avoiding any close buildings or dark areas where brain-eaters might lurk. It was still pretty early in the morning. They had seen a few shamblers hiding out in buildings, but the two walked quietly to avoid attracting attention. Of course, that wouldn’t help at all once the sun went down and the neighbors came out to party.

They had no truck, no place to stay, and no idea how they’d get back on the road. Floyd had lost all of his precious maps in Freedom’s explosive demise. All they knew was to head east.

The two made their way across a patch of sand to a rather large tower built on stilts. A raked roof topped walls made of glass, no doubt offering a great view of the area in all directions. It looked like it could have held a dozen people easily. Climbing the steep stairs slowly and quietly, shotguns pointed ahead, Floyd and Mikki were ready for anything. Theoretically, zombies couldn’t climb ladders, but who knew if someone waiting above had turned zombie long ago?

Arriving at the top floor, they looked through the windows and saw no one and no thing inside. Even so, they opened the door carefully, stepped through, and checked every possible place to hide. Nothing. Mikki was actually disappointed. The two removed their helmets and relaxed a little.

“Here you go, Mikki. Now you got your own binoculars.” Floyd picked the set of lenses off a table and handed them to her. He carefully examined a large map of the surrounding area that was laid out on another table while Mikki tried them out.

“Thanks, Floyd! These are great! Not too big but pretty powerful. Don’t suppose they got any grenades up here, do ya?”

Floyd laughed. “I doubt it. Besides, you still got a few left hangin’ on you.”

“Yeah, but you know those won’t last me long. Hey, look! You can see the Queen Mary from here! I mighta stayed back at NCH if they let us live there. Always wanted to take me a cruise.”

“Yeah, she’s a beautiful ship alright,” Floyd agreed, looking through his binoculars at the majestic old lady. The
grande dame
of British ships. “That ship ain’t goin’ nowhere though. They gutted it when they made it a tourist attraction.”

“Well, I prob’ly wouldn’t like it there anyway. That Colonel said it was full o’ politicians. Hey, Floyd, a radio! You still got that piece o’ paper in yer pocket with the frequency for the campground? Maybe we can reach somebody and let ‘em know we’re comin’ for ‘em.”

“If it works. Let’s hope we’re close enough to the NCH grid that we got power. That must be why that hospital we was danglin’ from had live electric cables.”

“Oh, they got power alright, Floyd. Look! Little fridge.” Mikki removed a glove and laid her hand against the outside of the door. “Feels cold, too.”

Floyd flipped the power switch and the radio lit right up. He fiddled with the dials until he found the right frequency. He was about to try the mic when Mikki interrupted him.

“Floyd, you ain’t gonna believe this.”

“There is a God, and he likes you.” She just stood there with an impish grin on her face.

“What? What are you babblin’ about?”

“Remember when we was playing Zombie Shootin’ Gallery in that supermarket in Groverstown?”

“Remember what we talked about?”

“Oh, for God’s sake, Mikki, we talked about a lotta things. What are you gettin’ at?”

Mikki held up a bottle. A brown bottle. There was no mistaking what it was, but she told him, anyway.

Under His Control (For His Pleasure, Book 18) by Favor, Kelly
The Year of Our War by Steph Swainston
The Union Club Mysteries by Asimov, Isaac
StrangersonaTrain by Erin Aislinn
Fogtown by Peter Plate
Treason: Book Two of the Grimoire Saga (a Young Adult Fantasy series) by S.M. Boyce
Betrayal at Falador by T. S. Church
The Life and Times of Benny Alvarez by Peter Johnson
Life Among Giants by Roorbach, Bill
For Camelot's Honor by Sarah Zettel