Read Forests of the Night Online

Forests of the Night 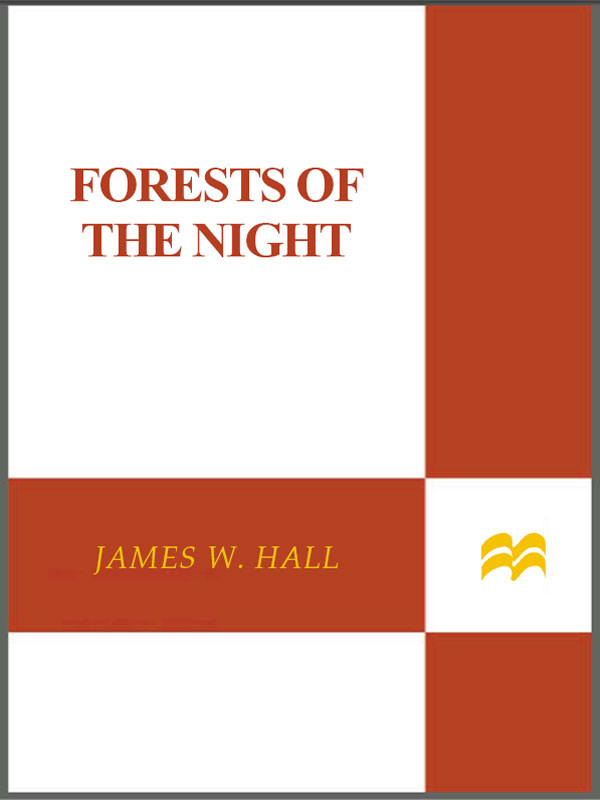 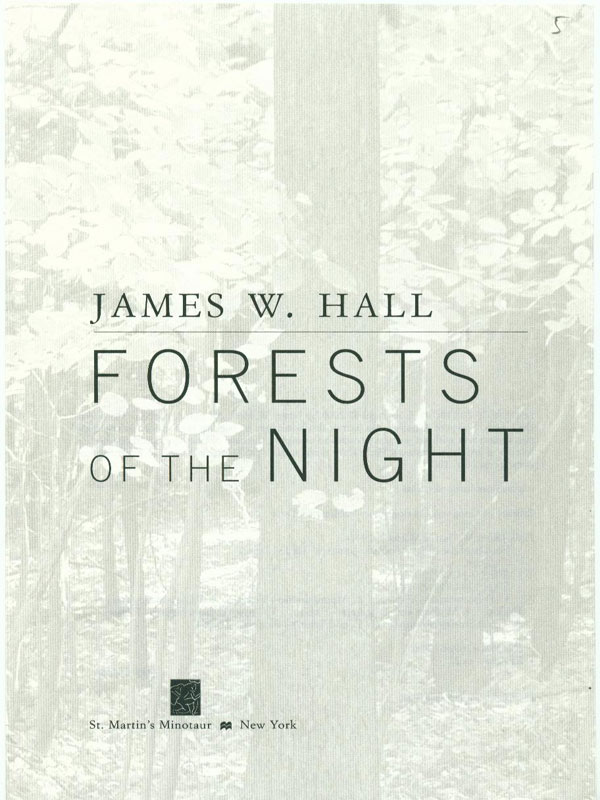 In the forests of the night

What immortal hand or eye

Could frame thy fearful symmetry?

There is no moral authority like that of sacrifice
.

In his sixty years, Tsali had never shed the blood of a white man or another Cherokee in anger or defense. But that was about to change.

Sitting on a sunny boulder outside his family's cabin, Tsali was sharpening his ax blade with a wedge of shale. Nearby, his two eldest sons were employed in similar fashion, preparing their own axes for another day in the forest, hewing firewood for the approaching winter.

Already, autumn's crimsons and golds were blazing through the poplars and birches high on the nearby peaks. And from the earth and stones beneath his feet, Tsali could sense the gray advance of winter. Each day the sun grew more feeble. Soon the drifts of snow would mount, a vast stillness would descend, and yet another test of the family's strength and resourcefulness would present itself.

After a while, Tsali's ax blade was so sharp it could shave the sparse hair from his arm or cleave a man's skull in a single blow.

Such would be its use before that day was done, though Tsali had no inkling of his fate or the ruthless men galloping toward them at that moment.

Isolated on his remote riverside farm, the same land his ancestors had cultivated before him, Tsali knew nothing of the harsh changes sweeping
the Cherokee Nation. All through the region, to make room for gold prospectors and white settlers, the U.S. government was systematically stripping Cherokees of their land, rounding them up and marching them halfway across the continent to the prairies of Oklahoma, then known as Indian Territory. Those who resisted were killed on the spot.

On the savage trek, which became known as the Trail of Tears, thousands of Cherokees died of starvation or of disease or at the hands of the U.S. Army. A third of the entire Cherokee Nation would perish before reaching that distant land of parched soil and bleak, treeless plains.

But living in his remote woodland valley, Tsali was ignorant of the events already under way and made no attempt, unlike many in his tribe, to conceal his family from capture.

As they washed and mended clothes in the shade of a giant poplar by the bank of the Nantahala River, Tsali's wife and daughters laughed quietly. Their pleasing voices sounded to Tsali like the music rising from the river's endless movement. The day was blissfully cool, the sky a perfect blue canvas stretched tight across the heavens.

Despite her advanced age, Tsali's wife was still a pleasure to his eyes. In their private times, the woman was as eager for the comfort and satisfaction of her husband's body as when they'd first wed. And he was as eager for hers. A comfort beyond all measure.

His contentment was increased by his daughters' full blooming. They were becoming fine women, strong and clever, with the dark, haunting eyes of their mother. Soon Tsali would journey to Quallatown or one of the other far-off settlements, introduce the girls to the clan elders, and set about finding suitable partners.

As Tsali rested his gaze on the women, the rumble of hooves sounded from the west. Garbed in blue woolen uniforms with gold buttons and hats of various shapes and sizes, four horsemen broke through the nearby woods, and whooped and fired their weapons at the sky as they galloped into Tsali's clearing. Their leader took the measure of the gathering of savages, then veered toward the boulder where the old man sat and drew his blocky pistol.

The soldier was tall with black hair. His eyes were close-set and glittered
with a bitter fury. His cheeks were densely bearded. Even from several feet away, Tsali could detect the reek of corn liquor.

Barking a command, the soldier waved his pistol for Tsali to rise. The old man pulled himself to his feet and his boys ran to his side. The other three soldiers were a motley collection who more resembled vagabonds than disciplined fighting men.

Having mastered a few English phrases, Tsali's eldest son took charge of the interchange. This sergeant was hereby ordering Tsali and his family to pack whatever belongings they could carry and make ready for a month's journey.

For what reason? Tsali demanded.

By order of President Andrew Jackson and the Congress of the United States, the sergeant replied. You and your people will accompany us to the Bushnell stockade, where you will remain until such time as you begin your march westward.

Tsali began to protest, but the sergeant jumped down from his horse and rammed his pistol into Tsali's stomach, while the other soldiers grinned and aimed their rifles at the family of Cherokees.

You will do as instructed or die where you stand.

After gathering bundles of possessions, Tsali and his family followed the orders of Sergeant Matthew Tribue, the bearded man with the narrow face and eyes of volcanic rock.

Later, as they trudged away from their home, his sons stared at Tsali, awaiting his command. Were they going to surrender to these loutish men, be marched away to the slaughterhouse without a fight?

Tsali made no move to resist but plodded forward with his eyes on the rocky path before him. After only a mile or so, Tsali's wife, a heavy woman, lagged behind, and Tribue, who had been steadily sipping from his flask, jabbed the old woman in the back with his bayonet to hurry her along.

She fell to the ground, bleeding, while the soldiers hooted at their sergeant's antics.

Tsali managed to hide his anger as he tended his wife's injury, then hoisted her to her feet and helped her forward down the trail.

As they marched, Tsali whispered to his sons, telling them to ready
themselves for attack. They would take the soldiers' guns and drive them away.

A mile or so later, when the soldiers were joking among themselves, Tsali motioned to the boys and they drew knives from their bundles and threw themselves on the four military men.

In his haste and drunkenness, one soldier discharged his rifle by accident and blew off the side of his own face. He fell from his saddle, mortally wounded. As the sergeant took hasty aim on the eldest boy, Tsali dragged the big man from his horse and, in one swift stroke, drove his ax into the man's forehead, breaking open his skull as cleanly as a ripe gourd.

The other two soldiers tore away from their attackers and fled.

In the sergeant's fall to the ground, a tin locket on a strip of rawhide came loose from around his neck. Tsali's son retrieved it and handed it to his father. Inside the tin heart was the miniature portrait of a young woman. She was round-faced, and her hair was worn in tight curls around her painted face. To Tsali, the woman's toothy smile resembled the cheap, beckoning look of the barroom strumpets he had seen in the white man's settlements.

Tsali closed the locket and placed it on the dead soldier's breast.

Bloodied and weak from the struggle, Tsali stood on that trail, a half-day's walk from his home, and absorbed the certain fact that he and his family were now forever exiled from their ancestral land.

With few choices open to him, Tsali determined they must strike out at once for the nearby peaks, which were honeycombed with caves. There they would hide themselves until some future time, when this difficulty had passed.

In the following days, they hunted the abundant game and harvested the late-season crab apples and berries. Twice they heard shouts from distant soldiers searching below them on the mountainside, but on neither occasion did a white man come closer than a half-day's walk to their hideaway.

Later still, the weather turned gray and cold. Fog and rain thickened the air. The men's hunting skills provided a steady supply of fresh game, while the girls wove baskets and ornaments to decorate their rock-walled home. They were determined to outlast the white man, live in what peace they could manage.

One frigid morning, as the family was awaking, a stranger appeared in the mouth of the cave.

Tsali's sons scrambled for their weapons.

But the Cherokee man showed his empty palms. He meant no harm. He had been searching for Tsali for over a week, carrying a message from the elders of the tribe.

An offer had been put forth by President Jackson. The leader of the white men could not abide Tsali's revolt. He feared Tsali's actions might inspire a wider rebellion. So desperate was the president to end Tsali's insurgence that he was offering the following bargain.

All Cherokee people not already forced from their homes and marched to the desolation of Indian Territory would be granted permission to remain on their tribal land, if only the renegade Tsali would surrender himself and his family to a firing squad.

When the man left, Tsali was silent. Hours passed. Tsali would neither eat nor reply to his wife or children, but sat cross-legged at the mouth of the cave, puffing on his pipe and staring toward the distant blue haze of the mountain ranges.

Two days after the offer was made, Tsali rose and gathered his cherished family before him. Tsali was a simple, practical man, not the least bit superstitious. In his long, difficult deliberation, no great spirit from beyond this world of rock and water and sky spoke to him, guiding him to his choice.

Tsali simply decided that for the greater good of his people, he must surrender. He would lay down his life and the lives of those he cherished so others of his people might have a chance to survive. His family received his decision with quiet calm. No tears, no arguments.

Days later, without ceremony, his strong young sons and handsome daughters were shot down before a firing squad, then Tsali was tied to the same bloody, mutilated tree and killed by a volley of bullets. In a small act of mercy, Tsali's wife and youngest boy were spared.

The federal government upheld its bargain and Tsali's death did indeed save scores from death on the Trail of Tears, and secure a home for the thousands of his people who populate those rugged blue mountains today.

No one would claim this plain, pragmatic Cherokee was a saint. His sacrifice did not atone for the sins of mankind, and no cathedrals were erected
to honor his name and pass on his teachings. Although his selfless act changed the course of his people's future, because he was a Native American his story survives only on the margins of the nation's history. A pebble among boulders.

Yet when dropped into the center of a still pond, that trifling stone sent ripples of consequence spreading outward in ever-widening circles until one of those tiny waves, tainted now by a hateful poison, washed ashore a century and a half later in the most unlikely place.