Read Forever and a Day Online

Forever and a Day 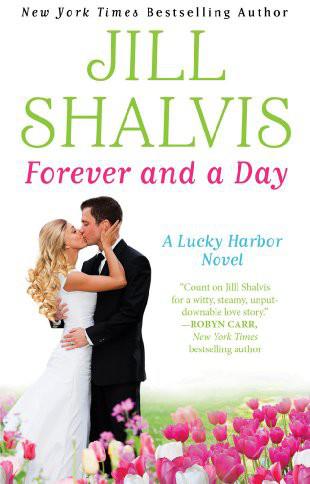 It takes a village to write a book, and I’m
grateful for mine.

To Christie and Carrie, for the invaluable advice on this book, not to mention the friendship, neither of which I could do without.

To Jolie and Debbi, for Mesquite 2011, where this book was plotted in its entirety while consuming far too much food and fun.

To Laurie and Melinda and Mary, for always being willing to read for me.

To Robyn and Kristan for having my back.

Chocolate makes the world go around.

T
ired, edgy, and scared that she was never going to get her life on the happy track, Grace Brooks dropped into the back booth of the diner and sagged against the red vinyl seat. “I could really use a drink.”

Mallory, in wrinkled scrubs, just coming off an all-night shift at the ER, snorted as she crawled into the booth as well. “It’s eight in the morning.”

“Hey, it’s happy hour somewhere.” This from their third musketeer, Amy, who was wearing a black tee, a black denim skirt with lots of zippers, and kickass boots. The tough-girl ensemble was softened by the bright pink
EAT ME
apron she was forced to wear while waitressing. “Pick your poison.”

“Actually, I was thinking hot chocolate,” Grace said, fighting a yawn. She’d slept poorly, worrying about money. And paying bills. And keeping a roof over her head…

“Hot chocolate works too,” Amy said. “Be right back.”

Good as her word, she soon reappeared with a tray of steaming hot chocolate and big, fluffy chocolate pancakes. “Chocoholics unite.”

Four months ago, Grace had come west from New York for a Seattle banking job, until she’d discovered that putting out for the boss was part of the deal. Leaving the offer on the table, she’d gotten into her car and driven as far as the tank of gas could take her, ending up in the little Washington State beach town of Lucky Harbor. That same night, she’d gotten stuck in this very diner during a freak snowstorm with two strangers.

With no electricity and a downed tree blocking their escape, the three of them had spent a few scary hours soothing their nerves by eating their way through a very large chocolate cake. Since then, meeting over chocolate cake had become habit—until they’d accidentally destroyed the inside of the diner in a certain candle incident that wasn’t to be discussed. Jan, the owner of Eat Me, had refused to let them meet over cake anymore, so the Chocoholics had switched to brownies. Grace was thinking of making a motion for chocolate cupcakes next. It was important to have the right food for those meetings, as dissecting their lives—specifically their lack of love lives—was hard work. Except these days, Amy and Mallory actually
had
love lives.

Amy disappeared again and came back with butter and syrup. She untied and tossed aside her apron and sat, pushing the syrup toward Grace.

“I love you,” Grace said with great feeling as she took her first bite of delicious goodness.

Not one to waste her break, Amy toasted her with a pancake-loaded fork dripping with syrup and dug in.

Mallory was still carefully spreading butter on her pancakes. “You going to tell us what’s wrong, Grace?”

Grace stilled for a beat, surprised that Mallory had been able to read her. “I didn’t say anything was wrong.”

“You’re mainlining a stack of six pancakes as if your life depends on it.”

“Because they’re amazing.” And nothing was wrong exactly. Except…everything.

All her life she’d worked her ass off, running on the hamster wheel, heading toward her elusive future. Being adopted at birth by a rocket scientist and a well-respected research biologist had set the standards, and she knew her role. Achieve, and achieve high. “I’ve applied at every bank, investment company, and accounting firm between Seattle and San Francisco. There’s not much out there.”

“No nibbles?” Mallory asked sympathetically, reaching for the syrup, her engagement ring catching the light.

Amy shielded her eyes. “Jeez, Mallory, stop waving that thing around—you’re going to blind us. Couldn’t Ty have found one smaller than a third world country? Or less sparkly?”

Mallory beamed at the rock on her finger but otherwise ignored Amy’s comment, unwilling to be deterred. “Back to the nibbles,” she said to Grace.

“Nothing to write home about. Just a couple of possible interviews for next week, one in Seattle, one in Portland.” Neither job was exactly what Grace wanted, but available jobs at her level in banking had become nearly extinct. So here she was, two thousand miles from home, drowning beneath the debt load of her education and CPA because her parents had always been of the “build character and pave your own road” variety. She was still mad at herself for following that job offer to Seattle, but she’d wanted a good, solid position in the firm—just not one that she could find in the
Kama Sutra
.

Now late spring had turned to late summer, and she was
still
in Lucky Harbor, living off temp jobs. She was down to her last couple of hundred bucks, and her parents thought she’d taken that job in Seattle counting other people’s money for a living. Grace had strived to live up to the standards of being a Brooks, but there was no doubt she fell short. In her heart, she knew she belonged, but her brain—the part of her that got that she was only a Brooks on
paper
—knew she’d never really pulled it off.

“I don’t want you to leave Lucky Harbor,” Mallory said. “But one of these interviews will work out for you. I know it.”

Grace didn’t necessarily want to leave Lucky Harbor either. She’d found the small, quirky town to be more welcoming than anywhere else she’d ever been, but staying wasn’t really an option. She was never going to build her big career here. “I hope so.” She stabbed another pancake from the tray and dropped it on her plate. “I hate fibbing to my parents so they won’t worry. And I’m whittling away at my meager savings. Plus, being in limbo sucks.”

“Yeah, none of those things are your real problem,” Amy said.

“You’re not getting any.”

Grace sagged at the pathetic truthfulness of this statement, a situation made all the worse by the fact that both Amy and Mallory
were
getting some.

“Remember the storm?” Mallory asked. “When we almost died in this very place?”

Mallory ignored this and pointed her fork at Grace. “We made a pinky promise. I said I’d learn to be a little bad for a change. And Amy here was going to live her life instead of letting it live her. And you, Miss Grace, you were going to find more than a new job, remember? You were going to stop chasing your own tail and go after some happy and some fun. It’s time, babe.”

“I
am
having fun here.” At least, more than she’d ever let herself have before. “And what it’s time for right now is work.” With a longing look at the last stack of pancakes, Grace stood up and brushed the crumbs off her sundress.

When Grace had first realized she needed to get a temporary job or stop eating, she’d purposely gone for something new. Something that didn’t require wearing stuffy pencil skirts or closed-toe heels or sitting in front of a computer for fifteen hours a day. Because if she had to be off-track and a little lost, then she
was
going to have fun while she was at it, dammit. “I’m delivering birthday flowers to Mrs. Burland for her eightieth birthday. Then modeling at Lucille’s art gallery for a drawing class.”

“Today they’re drawing hands.” Nude was
tomorrow’s
class, and Grace was really hoping something happened before then, like maybe she’d win the lottery. Or get beamed to another planet.

“Sounds like you’re talking about something different than modeling,” Mallory said dryly.

Grace rolled her eyes at the both of them and stood. She dropped the last of her pocket money onto the table and left to make the floral deliveries. When she’d worked at the bank, she’d gotten up before the crack of dawn, rode a train for two hours, put in twelve more at her desk, then got home in time to crawl into bed.

For one thing, she saw daylight.

So maybe she could no longer afford Starbucks, but at least she wasn’t still having the recurring nightmare where she was suffocating under a sea of pennies that she’d been trying to count one by one.

Two hours later, Grace was just finishing the last of the deliveries when her cell phone buzzed. She didn’t recognize the incoming number, so she played mental roulette and answered. “Grace Brooks,” she said in her most professional tone, as if she were still sitting on top of her world. Sure, she’d given up designer wear, but she hadn’t lost her pride. Not yet anyway.

“I’m calling about your flyer,” a man said. “I need a dog walker. Someone who’s on time, responsible, and not a flake.”

Her flyer?
“A dog walker?” she repeated.

The man, whoever he was, had a hell of a voice, low and a little raspy, with a hint of impatience. Clearly he’d misdialed. And just as clearly, there was someone else in Lucky Harbor trying to drum up work for themselves.

Grace considered herself a good person. She sponsored a child in Africa, and she dropped her spare change into the charity jars at the supermarket. Someone in town had put up flyers looking to get work, and that someone deserved this phone call. But dog walking…Grace could totally do dog walking. Offering a silent apology for stealing the job, she said, “I could start today.”

“Your flyer lists your qualifications, but not how long you’ve been doing this.”

That was too bad because she’d sure like to know that herself. She’d never actually had a dog. Turns out, rocket scientists and renowned biologists don’t have a lot of time in their lives for incidentals such as dogs.

Miss Foster’s Folly by Alice Gaines
Undecided by Julianna Keyes
Minutes Before Sunset by Shannon A. Thompson
AWOL on the Appalachian Trail by Miller, David
Sybill by Ferguson, Jo Ann
On the Case (From the Files of Madison Finn, 17) by Dower, Laura
Kiss of the Betrayer (A Bringer and the Bane Novel) by Boone Brux
Deceived by Patricia H. Rushford
Black Unicorn (Dragonflight) by Tanith Lee
The White Wolf by Ron Roy