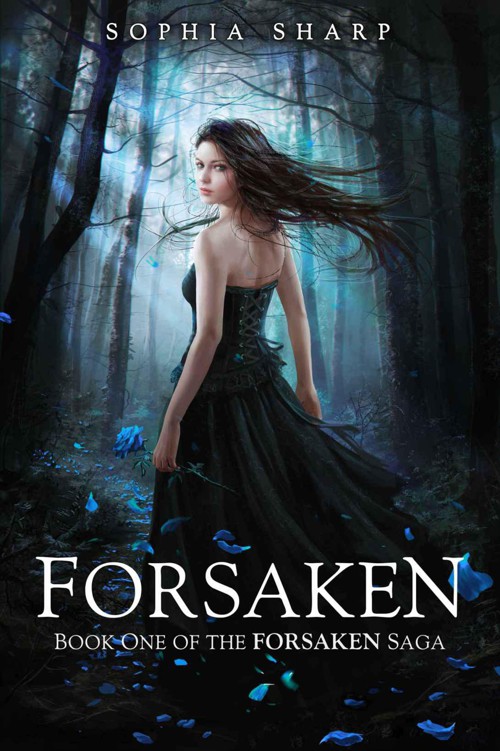 (Book One of the FORSAKEN SAGA)

Nora Colburn was perfectly content in life. A junior in high school, she had good friends, a great family, and did well in school. Nothing particularly exciting ever happened where she lived, and everything was stable.

But that all drastically changes when a new student arrives at Nora’s school. Wild rumors swirl about his past, and Nora becomes determined to find out the truth.

As she gets to know the mysterious student, he shares with her an ancient secret… one that may yet put both of them in grave danger.

And for the first time in her life, Nora is exposed to a completely unfamiliar world. She is swept away on an exhilarating journey that takes her to a place where romance and great destiny may yet await… and where supernatural powers run wild.

Nora Colburn sat at an ordinary lunch table, at her ordinary school, staring at an extraordinary vision.

A typical all-American high school heartbreaker and star of her school’s lackluster football team, Brady was easy to fall in love with. Nora had fallen for his golden locks and emerald eyes the first time she’d seen him. And with the easy smile that lit his face whenever he spoke to someone he liked.

The problem was, he never spoke to
her
.

It seemed he didn’t even know she existed. He made his way through the lunch room, stopping to talk to a few of his teammates and pausing to tug on Carol Bradford’s pony tail, before settling at his usual table.

Nora had been completely and hopelessly infatuated with him ever since entering high school. Back then, he was the shy kid sitting at the back of the class, the one who got picked on for being too small, for having hair too long. Back then, she had been his only friend. They sat together that year in English class, and Nora’s heart would start to pound every time he came near. She was sure he felt something for her, but in their youthful innocence, neither had the courage to do anything about it.

That all faded the following year, when Brady came back to school tall, fit, and muscular. He had hit an unexpected growth spurt. Suddenly the same boy who had been picked on the year before transformed into the most popular guy in school. His athletic abilities developed just as much, and the same guys who’d picked on him became his best friends and teammates. And
he
became the jewel of every girl’s eye.

Nora thought she had some advantage, at first, for having known him before that summer transformation. But she learned it afforded her little in the way of standing out. Now, three years later, she was just one in a legion of adoring Brady Lowe fans.

Which was why, at the start of spring semester in her junior year, she resolved to win back Brady’s attention.

“Nora…” The frustration in Molly’s tone told Nora she’d called her name more than once.

Nora pulled her gaze reluctantly from Brady. “What did you say?” She took a sip of water.

“I said, did you get the notice in the mail?” Excitement had Molly practically bouncing in her seat.

“The one about the new student transferring in next week.” Molly frowned at the meat on her plate, moved it around with the fork, and pushed the entire tray aside. “When was the last time we had a new student?”

Nora thought back. “Eight grade? Remember Joanne Stark? She enrolled for a few weeks before her parents pulled her out to place her in a private school.” Nora glanced back at Brady, who was already flirting with Lowey Marshall.

“Well, take a look at this.” Molly pulled a crumpled paper from her bag and handed it to Nora.

Nora sighed and pulled her attention back to her friends. She skimmed through the letter. It informed parents that a new transfer student would be coming. Noted in fine print at the bottom of the page, a single sentence read;
This transfer student has been expelled from a previous school on account of physical misbehavior.

Molly pointed to the line. “What that means, no one knows, but rumors started flying around like arrows from a crossbow as soon as the letter was printed. I can’t believe you haven’t heard.”

“I heard he got into a fight with a teacher.”

“I heard he put some guy in a coma, who’s now on life-support in the hospital.”

Nora looked to her friends, all seated with her at the wide cafeteria table, and rolled her eyes. She was certain there was a simpler, less exciting explanation for the student’s arrival. “We don’t even know it’s a
he
.”

“Well, what else would
he
be?” Stacy laughed. Stacy had long, bleach-blonde hair and a year-round tan Nora thought belonged more in California than rainy Vancouver, Washington. “A
girl
? I don’t think a girl would get herself in trouble like that!”

“You never know,” Nora shrugged. “For all we know,
she
might be the biggest, meanest girl ever to walk the face of the earth.”

“Here? Nuh-uh.” Molly frowned as she spoke. “Maybe somewhere ghetto, like
New York
, but here on the west coast the girls are all the same. All like us. Pretty, petite—”

“—and delicate.” Nora finished the sentence, smiling. Everybody laughed. The girls poked fun at Molly for looking too much like a porcelain doll and acting the part as well. Molly took it all in stride, laughing along with all of them. It felt like the loving ribbing you might give a little sister.

“Anyway,” Nora continued, “I don’t think it’s going to end up even half as bad as the stuff you’ve been hearing.”

“But why would they send us a
letter
?” Kelly spoke for the first time. “If it wasn’t
something
bad
?” The way she emphasized that last word made it sound like
something bad
was the end of the world.

“Who knows?” Nora shrugged. “But I think it’s something much simpler. Like…what if the district required them to send the letter?”

“To alert the parents?” Kelly asked.

“Not to alert them by spooking them.” Nora glanced at the clock and started to collect her things. “But to let them know the new student had been in trouble before. I think the district, or the school, are just watching their backs in case anything happens here.”

“…or mauls someone in the hallway,” Stacy mused. “Or attacks an innocent, fragile girl.” She winked at Molly and Molly jumped. That caused everybody to laugh again.

“Well, I know one thing.” Nora slung her bag over her shoulder and lifted her tray. “We’ll all find out how much truth there is to the rumors in less than a week.”

The following Monday, Nora walked sleepily through the hallways of the school toward her early morning Math class. She covered her mouth with one hand to prevent too big a yawn from escaping.

She had walked to school by herself this morning, instead of getting a ride, to be able to
think
. She was frustrated by the lack of progress on the Brady front. She had no classes with him, so her only hope would be running into him either before school, after school, or between classes. She even knew what she was going to say.

“Hey you,” she’d call out to him with a smile. He’d smile back, melting her heart, and walk over to greet her for the first time in years.

“Hey,” he’d say shyly, looking down at his feet.

“I haven’t seen you in ages, you know,” she’d tell him. “It’s too bad we drifted apart. I always thought that we could have—”

“Miss
Colburn
?” A harsh, uncompromising voice startled Nora out of her reverie. “If you’d take your seat, please?”

Nora looked around and realized she’d stopped right in the doorway, blocking the entrance to the classroom for all the late arrivals behind her. Her teacher, Mrs. Millburn, examined her harshly, frowning hard enough to make the white bun on top of her head quiver. Heat crept into Nora’s cheeks. She ducked her head and hurried to her seat in the middle of the room.

She placed her bag beneath the desk and pulled out a binder with all her math notes. Mrs. Millburn didn’t take kindly to students who didn’t pay attention in class, and after the blunder just now, Nora didn’t want to draw any more of her wrath.

The kids around her were already seated and looking at Mrs. Millburn. Nora pulled her jacket tighter over her shoulders and looked to the front of the class, pen in hand, pretending to pay attention.

But when Mrs. Millburn started talking about last week’s lessons, the plan for the day, and the upcoming unit test, Nora’s resolve disappeared. She couldn’t force herself to feign interest.

Instead, she chastised herself for the ridiculous interaction she’d just daydreamed about. “
Hey you.
” Was that the best she could come up with?

Something large and heavy slammed into her shoulder. She looked up and saw a backpack, carried precariously by someone she didn’t recognize. Her heart froze.

“Sorry,” he muttered half-heartedly and continued to walk down the aisle. After he passed, Nora twisted back in her seat to look at him. He was tall.
Really
tall—maybe six-foot-three or six-foot-four. He had that skinny skater look going, too. His clothes were inconspicuous: dark jeans, a black hooded sweatshirt, and plain gray Converses. Nothing except his height stood out. He made his way toward the very back, where a single empty desk awaited him. Nora kept her eyes on him, curious to see what his face looked like. He kept walking, slowly, his head tilted down. Something about the way his shoulders slumped told her he wasn’t particularly thrilled to be here.

Nora spun around and found Mrs. Millburn standing right in front of her desk, staring daggers at her. Her stomach clenched in response.

“Or, perhaps, Mr. Geralds over there has caught your attention?” Mrs. Millburn paused, allowing the snickers to ripple through the classroom. Nora’s cheeks grew hot. “Since you seem to have taken such a personal interest in him, maybe I should task you with getting him caught up in class, hmm?”

“Yes, that sounds like a good idea to me,” Nora’s teacher continued. “You can be responsible for his academic development in this course. Mathematics
is
a strong point of yours, is it not?” Mrs. Millburn lifted an eyebrow, knowing as well as Nora did that it was
not
. Nora’s cheeks grew hotter and hotter by the second.

If the Earl Only Knew (The Daring Marriages) by Amanda Forester
Summer's Freedom by Samuel, Barbara, Wind, Ruth
Rise of the Prepper: A Story of the Coming Collapse by Frank Bates
Fatal Headwind by Leena Lehtolainen
Falling for Mr. Darcy by KaraLynne Mackrory
Los Angeles Stories by Ry Cooder
American Indian Trickster Tales (Myths and Legends) by Richard Erdoes, Alfonso Ortiz
The Convent Rose (The Roses) by Shurr, Lynn
The Path of a Christian Witch by Adelina St. Clair
Jasmine Plays Her Hand (Fantasy Guild No. 1) by Anwen Stiles