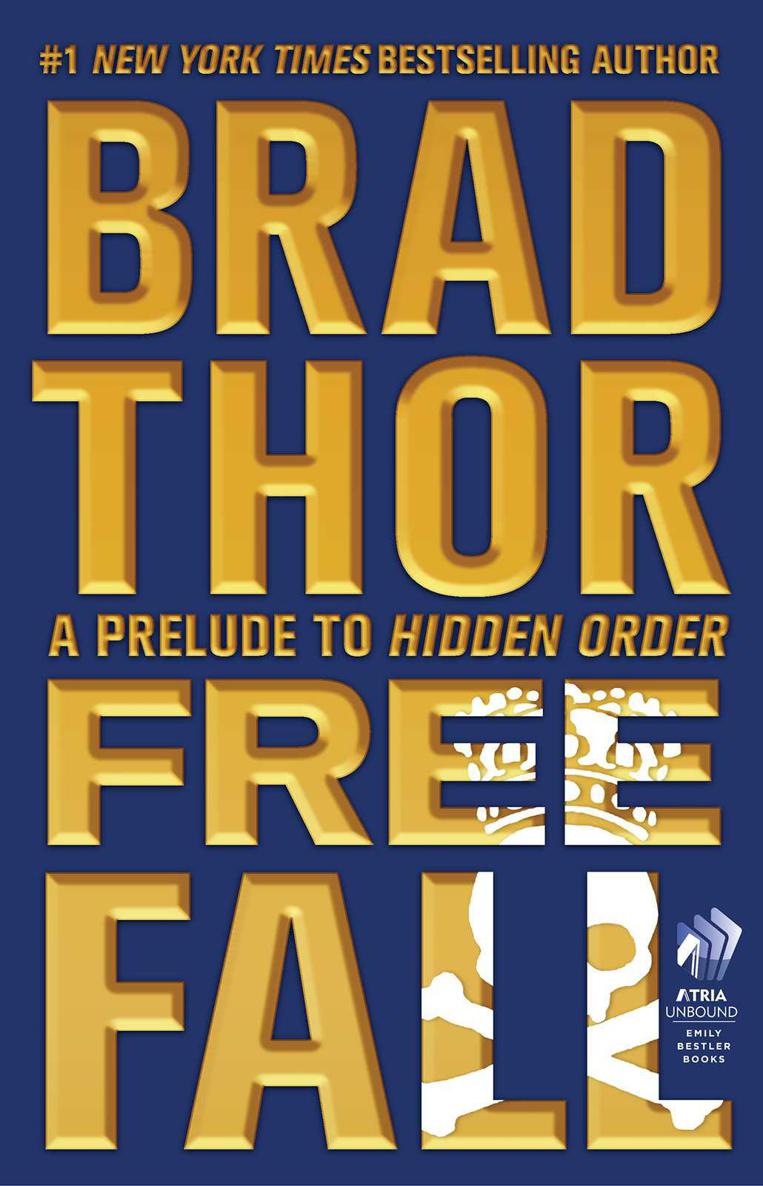 Thank you for downloading this Atria Books/Emily Bestler Books eBook.

Sign up for our newsletter and receive special offers, access to bonus content, and info on the latest new releases and other great eBooks from Atria Books/Emily Bestler Books and Simon & Schuster.

G
ULF OF
A
DEN

T
hrough the hazy-green of Scot Harvath’s night-vision goggles, it looked like an illusion. The infrared markers, which had been carefully laid out on the rear deck of the ship beneath him, should have been floating—rolling with the swell of the ocean—waiting for him, not racing up to meet him like tracer fire. He was coming in
way
too fast.

He’d had no choice. The wind had changed, and coming in quickly was the only way to keep up with the speed of the enormous vessel. There was no other way to do this. It
had
to be tonight.

They might wait weeks for another moonless night like this, but by then, all the hostages could be dead.

It had to be tonight and it
had
to be moonless, because that was the only way a dangerous, borderline-psychotic insertion like this could ever possibly work.

Most of the operators Harvath had approached had simply shaken their heads. You didn’t parachute onto a supertanker in the middle of the night, in the middle of a shark-infested ocean, and you didn’t do it with only four guys and expect to take control of the vessel. You used a minimum of eight guys and you snuck up on the hijackers by using one of their own resupply boats. That was how you took pirates by surprise. At least, that was what the previous team had thought.

The supertanker
Sienna Star
was a vessel owned by a Maltese shipping conglomerate, crewed by Greeks, and insured out of the United Kingdom. Politically, its hijacking was a maritime nightmare. The government most responsible for resolving the standoff was the Maltese, but it had no firepower in the Indian Ocean.

In response to the exorbitant ransom demand, the insurance company had stepped up and sent in a team it had used in similar hijackings. The results this time, though, had been disastrous. The team had not only used the same tactics they had employed in the past, but they assumed their enemy was unsophisticated, and they discounted the hijackers’ ability to network and trade intelligence with other pirates. When the rescue team showed up, the Somalis were ready for them.

The attempt not only failed, but the pirates were so angry, they executed the ship’s navigator as a warning against any future attempts. They also increased their ransom demand, ratcheting it above the conglomerate’s coverage.

The insurance company recommended that the shipping company put up the difference and that, together, they pay the hijackers off. But although the owners of the
Sienna Star
were ready to spend money, there was no way in hell they were going to do so to buy back their
own
ship.

They knew all too well that if they paid this time, there’d be another hijacking in the future, and another after that. Someone needed to send a crystal-clear message that their ships, and more important, their
crews
, were not to be trifled with.

The key to getting that message across would depend on bringing in the right messengers. On paper, the insurance company’s team had been good, but they needed the best. The
Sienna Star
’s owners wouldn’t tolerate any more mistakes, nor would they tolerate another single crew member dying.

It took the shipping company forty-eight hours to find the men they were looking for. There was a group based in Northern Virginia headed by a distinguished former Central Intelligence Agency operative named Reed Carlton. Carlton had created the CIA’s counterterrorism center in the 1980’s and now helmed his own boutique, private intelligence and counterterrorism organization. The Carlton Group was exorbitantly expensive, but it had an impressive pedigree and guaranteed something none of the other private contracting firms would—
results
. Carlton promised that if his team wasn’t one hundred percent successful, the shipping company wouldn’t owe them a dime. It was an offer the
Sienna Star
’s owners couldn’t refuse.

Harvath thought the terms the Old Man, as he referred to Carlton, had offered were nuts. There was no way anyone in their business could guarantee a job like this, and Carlton knew it. The problem, though, was that their firm had just suffered a tremendous loss, and they needed the business. In a crazy turn of events, they had been so good at their job that Carlton and his top operators had recently been targeted for assassination. Harvath and the Old Man had survived, but they had lost their best people. Without operators to carry out assignments, the Carlton Group was hamstrung and the Department of Defense had cancelled their contract.

Now, while they tried to care for the families of their deceased colleagues, they had to scramble to bring in revenue. They needed a big payday to help get the Carlton Group back on its feet.

To that end, the Old Man had dreamed up the biggest price tag he could for this assignment and then doubled it. He’d done his homework and not only knew about the prior failed rescue attempt, but also what the pirates’ demands were. He also knew that the insurance company wanted to give in.

All things considered, Carlton’s offer was a steal. The fact that the client had to pay only if the assignment was successful was the icing on the cake. The supertanker’s owners had jumped on it.

Harvath, though, had reservations. It wasn’t that recapturing a supertanker taken by Somali pirates didn’t appeal to him. It did. With an extensive counterterrorism background in the SEALs and then the Secret Service and DHS, this was the kind of action he both trained for and lived for. It was something that, once it got into your bloodstream, was nearly impossible to purge.

But while fitter, faster, and more adept than men half his age, he was entering his early forties and knew all too well that life was eventually going to catch up with him. As long as it wasn’t tonight, he’d deal with that question later.

Right now, he was speeding toward earth like an asteroid and needed to create as much drag as possible in order to slow down. Plunging the toggles of his chute toward his boots, he locked out the muscles in his arms. As the canopy flared, his muscles burned and it felt as if the cords would rip right out of the fabric.

He came in hard
and
ugly, slamming into the deck and being dragged for several feet. To the untrained eye, it looked like the work of a total amateur, but Harvath was anything but an amateur. He had made more jumps under adverse conditions than he could remember. Only someone with a similar background could appreciate how complicated it was to pull off such a landing.

Harvath quickly collapsed and then released his chute. After pulling off the harness, he bundled it all together and threw it in a ball over the side and into the ocean.

Taking up his position, Harvath heard a voice over his earpiece. “Next time, I’ll just paint a handicapped parking stall. Would that be easier for you to hit?”

The voice belonged to his teammate Matt Sanchez. Without taking his eyes off the six-story superstructure in front of him, Harvath raised his left hand and extended his middle finger.

“Nice, Norseman. Now let’s see if you can count to two,” Sanchez snarked from his position across the deck.

Norseman
was Harvath’s call sign. Sanchez’s was
Streak
. He was a good kid and Harvath liked him. He had not only been a SEAL, like Harvath, but he was an incredibly accomplished parachutist. He had been on the U.S. Navy’s Leap Frogs parachute demonstration team and as a SEAL had conducted some of the most challenging parachute insertions into enemy territory ever attempted. The kid had brass balls, and considering that this jump was an eleven on the one-to-ten difficulty scale, he was the perfect choice to hit the deck first and place the IR markers for the rest of the team.

Looking up, Harvath could make out the approaching figure of former Delta Force operator Pat Kass and gave a warning to Sanchez over the radio, “Next package inbound.”

Kass, known by his call sign,
Punch
, seemed to have judged the speed of the ship better, and was coming in more slowly than Harvath had.

He landed solidly on the deck, but lost his balance and had to catch himself with one hand—a situation called “picking up change,” which would have cost a jumper points on a demonstration team, but was nothing short of outstanding under these circumstances.

After collapsing, collecting, and jettisoning his chute and harness over the side, Punch took up his position.

Before leaving for the Indian Ocean, the team had spent two weeks training on an almost identical American tanker in the Gulf of Mexico. They ran through every possible scenario until they not only had an excellent working grasp of the ship, but also of each other. It wasn’t nearly enough time, of course, but it was all they had, and it was better than nothing.

“I think I forgot my cigarettes,” he replied, patting his pockets.

Harvath shook his head and laughed.

Kass, like the last jumper they were now waiting for—another former Delta operator, John Dean, aka
Wiggy
—had served on the Army’s Golden Knights parachute team, as well as the Special Operations Black Daggers team. Kass and Dean were a few years older than Harvath but completely squared away, and had seen their share of tough jumps. This was one they’d tell their grandchildren about someday.

Glancing skyward, Sanchez was the first to pick up Dean as he descended toward the ship. “Last package inbound.”

Harvath and Kass looked up.

It took a moment to make him out. With their dark parachutes, blackened faces, and dark tactical clothing, they were intentionally difficult to spot.

Harvath could see that Dean was fighting the same battle he had on his jump. It was very hard to gauge both the wind and the speed of the ship.

“He’s going to drill right through the deck!” Sanchez exclaimed.

Because they didn’t put their earpieces in until after they landed, there was no way the men on the ship could warn their teammate.

Then, they all watched as John Dean not only came in too fast, but missed the landing zone entirely.

No one knew if he was in the water or not, but if he was, he was as good as dead. Breaking ranks, Kass ran to the railing.