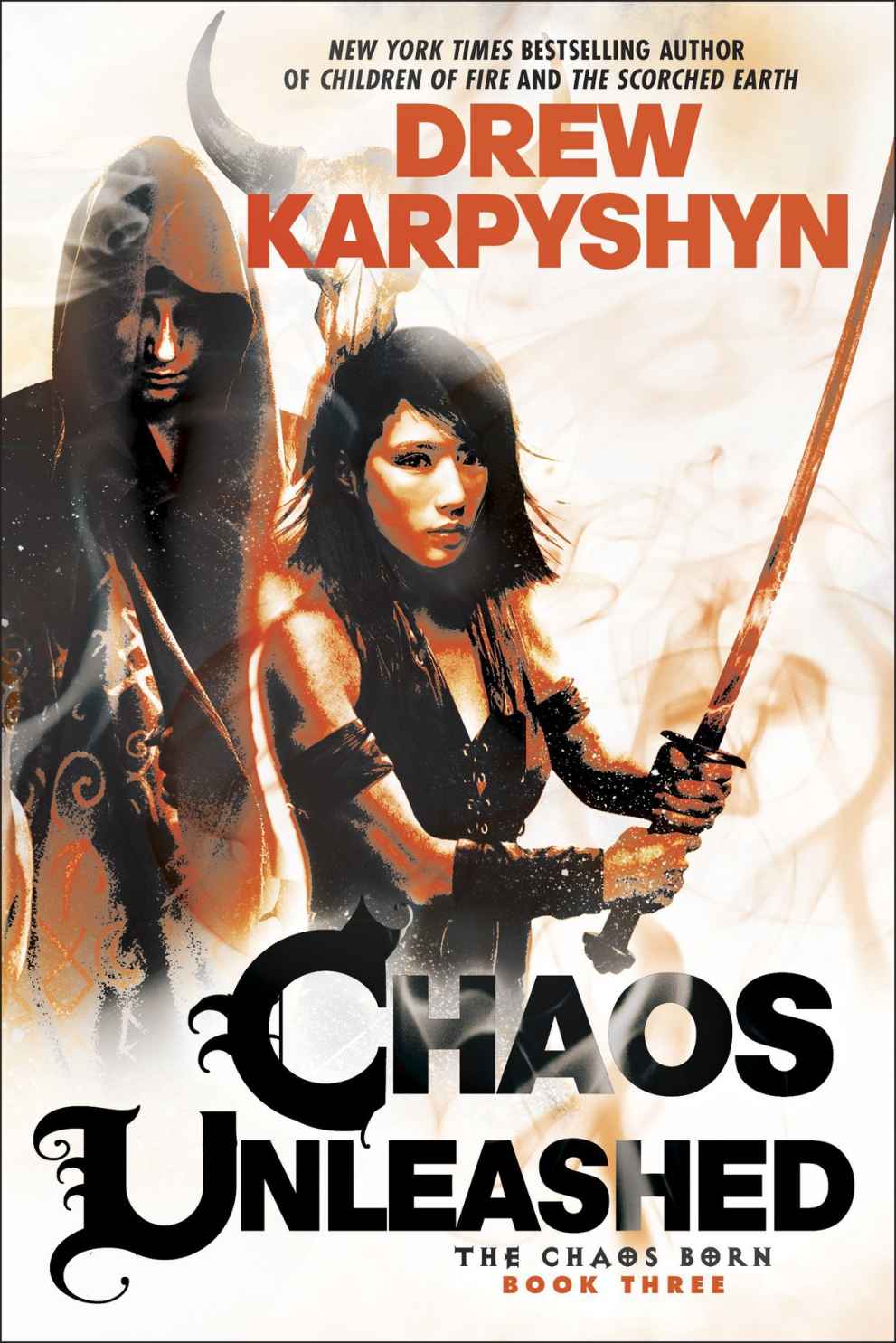 “Drew Karpyshyn plunges readers through a sweeping range of emotions. There are moments of despair and tragedy, acts of love and loyalty, amazing feats of strength and cunning. All of these aspects build into a crescendo that leaves this novel soaring on high notes.”

“Drew Karpyshyn weaves a rich, contrasting tapestry of epic story and doom. Gripping and compelling from the first page to last,
Children of Fire
is a dark-chocolate fantasy; delightfully biting and delectable all at once. Four ill-fated children born under a sign of chaos and flame carried me on a journey into an intriguing world of shadowy wonder. It’s a spellbinding epic told with masterful craft.”

“This intricately layered adventure breathes realism and overshadowing menace into ancient mythic archetypes, exposing the pain and wonder inherent in magic and the mingled hope and cynicism of modern fantasy.”

Chaos Unleashed
is a work of fiction. Names, characters, places, and incidents are the product of the author’s imagination or are used fictitiously. Any resemblance to actual events, locales, or persons, living or dead, is entirely coincidental.

Published in the United States by Del Rey, an imprint of Random House, a division of Penguin Random House LLC, New York.

On the sandy shores of an island at the farthest edge of the sea that bounds the mortal world, four divine, glowing figures stand in a tight circle around an obelisk of black obsidian—the Keystone. It towers above them, fifty feet tall and ten feet across on each of its four sides. Carved into the smooth, dark rock are powerful runes, and shapes and shadows shift below the surface: the living, churning power of raw Chaos.

Hiding in his nether realm far across the
Burning
Sea, Daemron the Slayer watches the four glowing Immortals intently, images reflected in the still waters of a stone fountain stained with blood.

He is beaten but not bowed. The armies of the Old Gods defeated him on the field of battle, but their victory is hollow. He still lives, as do legions of his followers. Bound to the mortal world they created, the Old Gods cannot follow him here. And so he is content to wait, safe beyond their reach while he plans his counterattack; his armies resting and gathering strength while he uses his own powerful magic to spy on his enemies.

Peering across the infinite chasm of space and time, the four figures appear as little more than blurred silhouettes of golden light. But even at this distance, he can sense that the power of the Old Gods has been diminished. They are wounded, dying. He takes pride in knowing the cost of driving him into retreat is more than even an Immortal can afford to pay. His own wounds are far less grievous. Had he risked more, had he stayed on the front lines longer, perhaps the tide of battle could have been swayed back in his favor. But at what cost? His retreat ensured that he will endure long after the other Immortals are gone. Their end is inevitable, as is his triumphant return.

Still, the ritual he is witnessing gives him pause. Curious, he watches intently as the glowing figures extend their arms and join hands in a circle around the Keystone, their voices rising in a single chorus. In response to their deep, rhythmic chant, the Keystone begins to tremble. A few seconds later it is enveloped by a soft white glow, emanating from somewhere deep within the black obelisk itself.

The pitch of the chant changes, going higher, redirecting and reshaping the gathering Chaos. The glow from the Keystone begins to pulse and thrum, beating like a living heart as it grows brighter and brighter.

The Gods raise their arms, still clasped hand to hand, and a bolt of pure white lightning shoots up into the sky. It streaks higher and higher, growing wider and brighter, stinging Daemron’s eyes with its intensity. And then, just as he is about to look away, the white beam fractures, splitting into smaller rays that echo all the colors of the spectrum.

The ritualistic chant of the Old Gods rises in pitch again, a sound so shrill it sends shivers down Daemron’s spine. The multicolored rays twist and dance as if alive, then shoot off in all directions, crisscrossing each other over and over as they paint the heavens. Within seconds the entire sky is blotted out by layer after layer of the luminous threads, weaving together and intertwining like a shimmering blanket.

The Gods are no longer chanting. As the spell intensifies, their throats unleash only a keening wail: Immortal screams that seem to leach the color out of the mystical tapestry above them, turning the millions of vibrant threads into a solid mantle of black. And then, before Daemron realizes what is happening, the spell ends, casting his vision of the Gods and the mortal world into utter darkness as the Legacy is born.

Daemron the Slayer wakes with a start, his massive chest heaving with quick, panicked breaths as his mind retreats from the black void. Disoriented, he casts his horned head quickly from side to side, scanning every brick and stone of the bare, circular room that is his innermost sanctum. A single ray of dim light shines down through the circular opening in the dome high above, leaving most of the room in shadow. But his glowing green eyes have no trouble piercing the gloom.

Reassured that he is alone, calm slowly returns. He extends the massive, leathery wings that had enfolded him as he crouched in the center of the empty floor and rises to his feet, stretching the stiffness from the muscles of his bare torso and slowly swishing his long, serpentine tail.

He rarely sleeps, but even a God must rest sometimes, particularly as his power has slowly faded during his exile. For centuries, his infrequent slumbers have been nothing but a time of empty darkness. When the Old Gods sacrificed themselves to create the Legacy, they did more than just cut him off from the mortal realm: They blinded him to the visions of Chaos. Until now.

He knows this was no mere memory, conjured up by a mind desperate to return to the land he should rightfully rule. He never actually witnessed the creation of the Legacy, but he knows it happened just as he has seen. The images running through his head were too detailed, too vivid, and too intense to be figments of his imagination. He was once a great prophet, and though it has been many centuries, he can still recognize the hallmarks of a true vision.

My dreams have returned. The Legacy is even weaker than I imagined!

With a series of slow, powerful flaps of his great wings, he ascends toward the small opening in the domed ceiling thirty feet above him—the only way in or out of the circular room in his castle’s tallest tower.

Breaching the arch of the dome, he continues to climb into the dull gray sky that marks every morning in his blasted realm. Far below his ever-growing army encircles the drab buildings of his capital, stretching out for miles in every direction: thousands upon thousands of monsters and mutants, twisted and deformed by generations of living in this Chaos-poisoned land.

His grotesque legions are eager for battle; even from on high he can sense their restless bloodlust. An army with no enemy to fight is dangerous; he knows there are many in the ranks who would throw themselves behind the rebels that seek to usurp him if given the chance. The longer they sit idle, the greater the risk of betrayal.

Fortunately, his dream has confirmed what he already suspected. Chaos is bleeding through the Legacy. It is time to begin deploying his troops, sending them in search of places where the Legacy is thinnest and most vulnerable. Massing there, they will strike the instant the barrier tears asunder, pouring through in an invasion the mortal world has no chance of stopping.

Tilting his head back, Daemron unleashes a piercing cry of exultation that echoes across the plains, causing the demonic soldiers below to cower and prostrate themselves on the ground.

His long exile is almost over. The time of his return draws near. And once again, the mortal world will be his.

The Cobra by Richard Laymon
Crimson Frost by Jennifer Estep
The Real Life of Sebastian Knight by Vladimir Nabokov
Alaric's Perfect Mate (Saber Chronicles Book One) by R.E. Butler
Jay Walking by Tracy Krimmer
Tyack & Frayne Mysteries 01 - Once Upon A Haunted Moor by Harper Fox
&quot;S&quot; is for Silence by Sue Grafton
Shattered by Dick Francis
Secret Horse by Bonnie Bryant
I'll Be There by Iris Rainer Dart