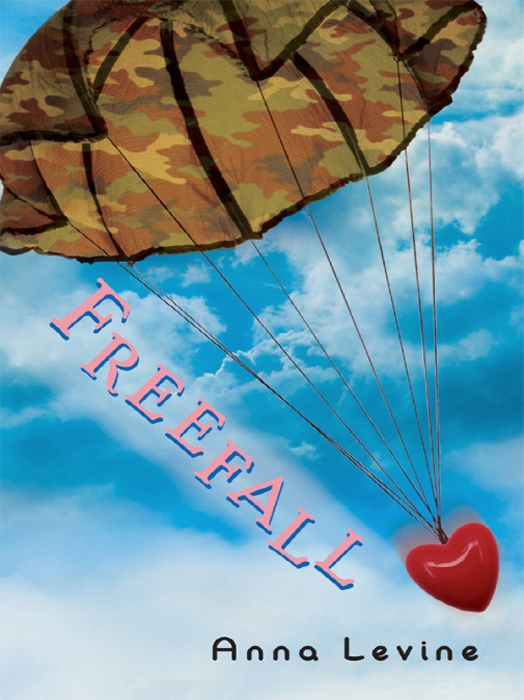 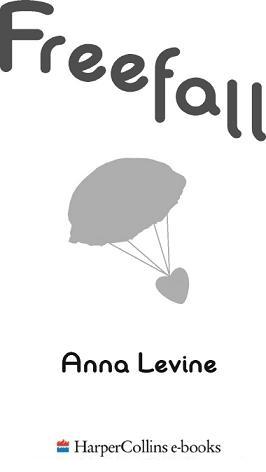 To my sons, Nimrod and Tomer, and their friends
Aviran, Raz, Omri, Nir, Ido, Amit, Ariel, and Yossef.
And to Danielle and Ayla. Thank you all
for your help and inspiration.

A special thanks to
Randi Firpo Hanegbi, writer and friend,
and to my agent, Rosemary Stimola
And always, for Alex

I am about to jump

I am about to jump.

I am about to jump wearing a full load on my back.

Crammed tightly, the pack is stuffed with my anxieties, fearsâand the army-issued parachute. It is secured to my chest with strings and clasps. It holds my heart in place, should it try to break free. When the time is right, I will yank the cord.

At that moment, the pack will open. My fears will rise to the dome of my chute, where they will hover. And for a moment, I will be free of them.

Feet, knees, hip, back, roll
. I have been trained to react without thinking. My body knows the drill. I will fall. Drift. Soar. Once my feet make contact with the ground, I will drop to my knees, lean into my hip, flip onto my back, and roll.

Not another rehearsal; this is reality. Am I ready? Yes. I can do this. Really, I can.

The door is pushed open. A rush of air blasts at me. The noise of the airplane motor swells and crashes inside my head.

I am sandwiched in. We shuffle forward like penguins. Birds without wings forced to fly. My hands clench the rungs. I have been trained for this moment, but nothing can tame the terror in my bones and the fear churning in my stomach. My thoughts rush around. What ifâ

I'm not ready to let go.

I can't. The air batters against my chest, pressing me back. The engine thunders in my head. There's nothing out thereâbut an empty void. My fingers are pried from the rungs.

My hands are wrenched free

A shove on my back

I jump into the taxi.

Shira follows behind me. Ben and Ron hop in through the opposite door.

“It's so cold out there,” says Shira.

“And it's supposed to be spring.” I scoot to the middle and snuggle next to Ben. The spaghetti-strap top I thought perfect earlier in the evening does little to keep out the cold. “We shouldn't have worn skirts,” I say to Shira, my teeth chattering.

“Better?” asks the taxi driver, turning up the heater.

“Getting there,” I say, rubbing my knees.

The driver looks us over in the rearview mirror. “Four separate drop-offs will cost you extra.”

He revs the motor but doesn't drive.

“I'll get off with Shira,” Ron offers.

The taxi driver shifts into gear and takes off down King George, honking and swearing at everything that moves.

“Rush hour. You'd think it was five in the afternoon, not midnight.”

Midnight on a Thursday and the town is packed with people trying to grab parking spots closest to the bars.

The driver careens through the narrow streets. I am thrown against Ben with each tight swerve. Finally the taxi pulls to a stop in front of Shira's house.

“Your mom's at the window,” says Ron.

“As usual.” Shira jumps out and blows us all a kiss.

Ron leans through the taxi window. “Okay, Ben. Show 'em how it's done. Call me as soon as you get back.”

We watch as Ron waits for Shira to run up the stairs, and then he darts behind her house, where he disappears into the maze of alleyways that crisscross through the courtyards.

Ben glances at his watch.

He shrugs. “I think it'll be okay. They said we had to have at least eight hours of sleep before the exercise or we're immediately disqualified, which would mean waiting another month until the next trial.”

“Maybe you shouldn't have gone out with us tonight?”

“Probably, but my dad was driving me crazy.”

I wait for him to go on. We're at a traffic light, and now that I've warmed up, I'm in no hurry to get home. We're still sandwiched together though Ron and Shira are gone and there's room to spread out. I rest my head against his shoulder.

“You should have heard him,” says Ben. “It was painful. âIn my day, pre-army training courses were tough.'” Ben mimics his father's gravelly voice. “âKeep away from the slackers, son. You don't want them to think you're a shirker. Grab the stretcher and leave the lighter loads for the wimps.'” Ben shakes his head. “If I don't make itâ”

I hear the catch in his throat and nudge him in the ribs with my elbow. “Since when have you ever doubted yourself?” I tease him. “You've been training for this since junior high. Look at those biceps.” I give his arm a playful squeeze.

He laughs. “You're right. I've just got to stay focused.”

The taxi draws up in front of my place. The flicker of the TV screen shines through the curtain slits. “My dad's still awake.”

“Of course. They interviewed him this morning, and he keeps watching the reruns.”

“Oh, please.” I groan. “When was the last time you saw a Knesset minister on the cover of
People
magazine?”

The taxi driver laughs. He looks at us through the rearview mirror. “In this country,” he says, “everybody's got to be a somebody.”

Before opening the door I turn toward Ben for our familiar cheek-peck good-bye. But this time something more happens. Maybe the taxi jolts or maybeâI don't knowâmaybe we've both been waiting for the opportunity, but it's our lips that touch and for a moment, or longer, our bodies press together. His lips hold mine. His hand circles my waist.

I am suspended. My heart beats like tiny bird wings, and I hover in this unfamiliar territory before pulling away. I fumble out of the taxi and manage a breathless good-night. By the time I run down the path to the entrance of my building, there is only a glimmer of taillights left to remind me of the moment.

A week has passed since then.

I speed up, taking a shortcut toward Shira's house, urged on by the crispness in the air and the anticipation of seeing Ben again. Tonight not even the tantalizing aroma of falafel and freshly baked pita from the outdoor snack bars can tempt me to linger.

Cutting through the cherry tree garden, I skirt the gang of stray cats huddled for warmth outside the old synagogue and arrive almost breathless at Shira's house. Their iron gate, which borders the alley, is half open. As I step inside their garden, I notice Shira's brother sitting at the top of the stairs leading to the entrance to their house.

“Look, Noah, snowflakes!” Tilting my head to the sky, I watch them parachute their way down, covering the wet Jerusalem courtyard with a layer of white.

He watches me from beneath the porch awning and laughs. He's dressed in his army pants and a green thermal shirt with the sleeves rolled up to his elbows. A scruffy pair of reddish brown army boots are beside him. One of his thick socks has a hole where his toe pokes through. Traces of snow in his short-cropped hair hint that he too must have been looking up at the flakes just seconds earlier.

I run up the stairs, and he moves aside to let me pass.

“Aren't you coming in to see the game?”

“No. Got to go back to my base soon. I'd rather catch some peace and quiet out here.” He reaches for his guitar, which is propped against the door. “Besides, I love the smell of snow.”

“Me too.” I glance back. “But Shira's waiting for me. I'll let you know how many baskets we're up at halftime,” I promise, letting the screen door swing shut behind me as I step inside.

The house greets me with smells of Yemenite spices: coriander and some others I can't name. A plate of leftover
malawah
is on the counter. I'm hoping that Shira will ask me later if I want to take some home with me.

“I've saved this for you,” says Dalia. Shira's mom points to the plate. “Pick it up on your way out.”

“A pleasure. The gang is in the den.”

I toss my shoes onto the pile. Part of me would rather sit outside with Noah watching the snow fall, but before I can change my mind, Shira comes flying into the hall. “Aggie! What took you so long to get here? I'm bursting with news!”

Her hug envelops me in a garden of jasmine blossoms.

“Amazing!” She flashes me a glossy purple smile. “Totally amazing. My first audition! With all those military personnel watching me, I thought my voice would crack, but I sang like honey!”

“Really, Aggie.” She fans her fingers through her thick hair. Yemenite hair. Full of decisive, tight dark curls. “They don't tell you right away! Total chaos would erupt. World War Three. The competition is more explosive than a minefield.” She licks her lips and glances over my shoulder, examining herself in the hall mirror. Scowling, she moves closer to inspect an invisible blemish. “You should have seen some of the other girls looking at me. You'd think I was the enemy.” She wipes away a smudge of mascara.

I check the mirror to see if the snow has made my makeup run.

“You know,” she says, “with your coloring, you should use black eyeliner. It would make the blue in your eyes stand out more. Make them look smokier and less innocent.”

We stare at our faces in the mirror. Shira's dark eyes are so much more seductive than mine. Her hair is crammed into a bright purple hair band. My hair never stays put. It frizzes into a thousand confused directions in an uncommitted shade of light brown.

Shira sighs. “Anyway. âMe?' I said to them. I said, âWe're all on the same side, you know. In the end, we'll all be wearing the same uniform and singing for the same troops.'”

She spits three times, pursing her lips the way her grandmother has taught her, to ward off the evil eye. “You shouldn't say things like that! I hope you didn't jinx me.”

“I meant the others, not you.”

We look at each other in the mirror.

“Will we still have time for each other next year?” I ask. “You'll be off singing to the troops in some glamorous spotâand me?”

Shira turns and throws her arms around me. “And you, Aggie, will always be a major part of my life. You ground me.” Holding me at arm's length, she says, “Without you I'd never see the stuff that matters. Songs would be melodies without meaning.” She tugs on the end of my hair, and laughs. “We'll always be friends, no matter where you end up.”

“That's exactly what I'm worried about. Where will I end up? What if they stick me somewhere I hate? Two years is a long time to be stuck behind some army desk. I'll go crazy filing papers, making coffee, and sitting in a stuffy room with a bunch of girls who probably have pop jingles for their ring tones.”