Fulfillment (Book 3 in The Temptation Series) 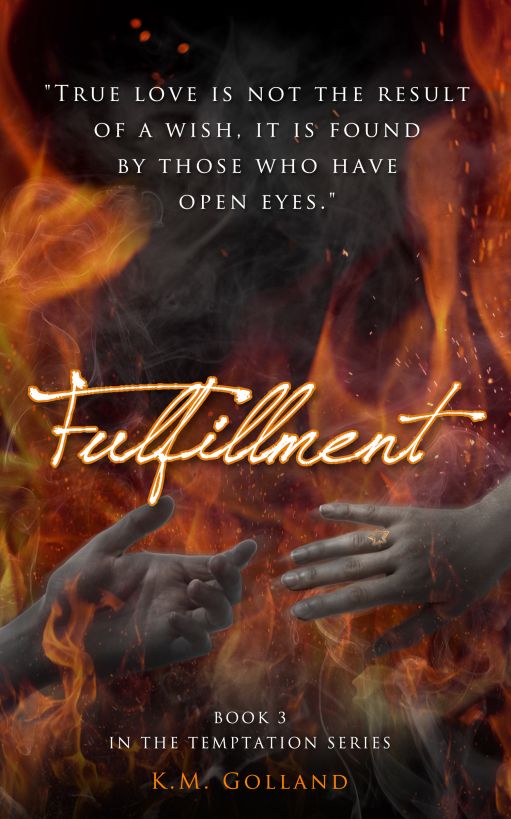 Book 3 in The
Temptation Series

All rights reserved.
This book may not be reproduced, scanned, or distributed in any
printed or electronic format without permission from the author.
Please do not participate in or encourage piracy of copyrighted
materials in violation of the author’s rights. All characters and
storylines are the property of the author and your support and
respect is appreciated.   The characters and events portrayed
in this book are fictitious. Any similarity to real persons, living
or dead, is coincidental and not intended by the author.
Except the original material written by the author, all songs, song
titles and lyrics contained in this book are the property of the
respective songwriters and copyright holders.

I’ve always
had goals to strive toward in life. Goals, that with hard work and
initiative were still achievable regardless of how remarkably high
they were set. But damn, it was amazing how quickly your lifelong
goals, aspirations, and priorities could change when faced with new
information—information that had the capacity to blow all plans you
previously had right out of the water. In my case, all it took was
the news I was about to become someone’s father.

The night
before, when Alexis had confirmed she was carrying our baby,
everything I had previously been working for my entire life seemed
meaningless in comparison to what my life held next. Leading up to
that moment, I had been hell bent on expanding and building my
family’s legacy—as a kind of tribute to my father. Now, I didn’t
only see it as a tribute to him, but also something I could pass on
to my family, and this new revelation excited the fuck out of
me.

As always,
when I stare at Alexis’ naked back lying before me, she fucking
takes my breath away and even more so now that she is carrying our
baby.

I gently trace
my finger down her back, careful not to wake her as she needs her
sleep. She had gotten up three times during the night to piss.
Three times! I can’t figure out how a person can possibly piss so
much. Although, I did have to chuckle to myself last night when the
bed dipped for the second time, waking me, and I heard her curse to
herself, and I quote, ‘pathetic bladder, you need to harden the
fuck up.’ Shit, she makes me laugh. My heart literally hurts at how
much I love and adore her, to the point where I think she somehow
has some form of supernatural hold on it, controlling whether it
beats or not.

The moment
Alexis confirmed that she had feelings for me, I knew that I would
do absolutely anything for her, and ever since, I have made it so
that my world revolves around the very spot on which she stands—and
I wouldn’t have it any other way.

She is just
everything I have ever wanted: beautiful, kind, smart, funny,
nurturing and feisty—my favourite part of the day being when she
challenges me. Of course, I know that I will always win, because
that is just something I cannot and will not change—she doesn’t
know that though.

God, just
thinking about her—let alone being in her presence—makes me so
bloody happy that my cheeks ache. I’m even sitting here right now,
staring at her and grinning like the fucking Cheshire Cat. I should
be ashamed of myself. Sometimes I think I need a good reminder,
telling me to man-up and stop acting like a fucking love-sick
teenager. After all, I am 36 years of age and have a fucking decent
set of balls between my legs.

When Alexis
confirmed that she was pregnant, I couldn’t say that I was shocked.
In fact, to be brutally honest, I had hoped she wasn’t on birth
control in the first place. It wasn’t something I had ever
discussed with her for a reason. Why?—because I hadn’t really given
a shit. She was the woman of my dreams, and I had fallen in love
with her from the word go, so the idea of her possibly falling
pregnant with my child was...well...fucking great!

Now I know
that sounds completely fucked up and bordering on evil, because on
paper she was still married and, she already had two wonderful
children of her own. But I make no excuse for getting the things I
want in life, and I certainly make no excuse for how I go about
getting them.

I made myself
a promise the day my parents and brother died, the very day my life
was ripped out from underneath me. I decided I would take care of
the ones I loved, and instead of wallowing in self-pity asking ‘why
the fuck me?’ I would make it my lifelong ambition to get what
I
wanted. After all, I fucking deserved it.

I’ve never
been one to say that life will hand you what you want on a silver
platter or that fate will bring you what you deserve. No, I’ve
always said life is what you make of it. That you rule how your
existence in this world plays out; that no one else controls the
decisions you choose to make. When you think about it, it’s quite
simple really. The direction in which you head is determined by
your own conscious decision to go there, and no one can take that
away from you.

I wanted
Alexis. I’d never wanted anyone or anything more in my life. So I
knew I would do whatever it took to have her, regardless of what or
who I had to overcome. Yes, it was selfish and callous, but I
didn’t care. I knew only too well that life was too fucking short
to spend it wasting time accepting the second rate dividends we are
all handed out.

Essentially,
life is what you make it, and I have one more thing I need to
accomplish in order to make mine the best it could possibly be. I
want to marry Alexis, make her my wife, and make her the happiest
woman on earth. I want to wake up next to her every day, because
fuck, she makes me the happiest man alive. So, as soon as I get the
green light to do so, Alexis
will
become my
wife.

Your body while incubating a baby
is capable of many amazing, miraculous, and...well...let’s just say
interesting things. Not only does it transform into a protective
cocoon, shielding your little unborn progeny from the outside
world, it also experiences some bat-shit crazy adjustments in the
process—both physically and mentally.

My body had
been experiencing these things in the two weeks it has been since
Janette—the City Precinct Nurse—visited the apartment to check me
over after being sick.

I remember the
moment when she pulled the test strip out of the cup which held my
hormone-affected urine and feeling as if she’d opened her mouth and
said in a low, deep, slow-motion voice...‘You’re pregnant,
Alexis’.

At first, I
hadn’t known what to think—apart from being incredibly shocked.
But, as the disbelief wore away, I found myself to be so angry at
my own stupidity for forgetting to take my contraceptive pill in
the first place. Yes, I had been a little preoccupied and
distracted by the crazy turn of events my life had taken during the
time in which my husband had confessed to having an affair. But I
had taken my birth control pill on and off for half of my life, so
to easily forget it like I had was completely careless.

I was having
another baby, and it was not something I had planned, nor had it
even been in my foreseeable future because, let’s face it, my life
had recently been turned upside-down. I had just left a marriage of
12 years after finding out my husband had cheated on me—then he
hadn’t cheated on me—then he had cheated on me. And, on top of his
infidelity, I had also found out that he’d spawned his own
offspring with the cheating bitch.

If that wasn’t
reason enough to feel that carrying a baby in my retired womb was
not such a great idea, then surely the fact that I had recently
fallen deeply in love with my new employer was.

Bryce Edward
Clark had pursued me tirelessly while I thought I was happily
married. He had also taken it upon himself to go behind my back—in
the form of an indecent proposal—and offer my husband an obscene
amount of money to—in my words—‘pimp me out’.

So, was
gestating, birthing and mothering another little human being at the
age of 35 something I had planned? Hell no! Remarkably though,
pregnancy hormones had a sneaky way of altering your thought
pattern, and it was these hormones, together with constantly seeing
the joy and elation Bryce displayed every time he looked at me,
that had somewhat changed my mind.

If I had
thought my Mr. Love-Smitten Clark had been absolutely and
undoubtedly in love with me before carrying his child, then I was
wrong. Because the way in which he looked at me now, and the way he
had been acting around me for the past two weeks, was nothing shy
of full-blown adoration and worship.

He kissed and
touched my belly every chance that he got. He rubbed my back during
the morning, and sometimes, noon and night sickness sessions. And,
he delighted in cooking fresh, organic meals for me. He was just
amazing and attentive, and I was so lucky to have him.

The thing is,
with all the beautiful, loving and sentimental gestures, came many
annoying and aggravating ones too, like demanding I let him give me
a foot rub nightly—which I was still dead against. He also
practically carried me around everywhere within the apartment—which
was getting beyond the joke. And, he had been sparse with the ‘I
need to be inside of yous’—because apparently, ‘having sex may be
dangerous’.
Dangerous!...Ha, I will be the one who is classified
as dangerous if my Mr. Overprotective Clark does not have sex with
me within the hour.
Lucky for me, this was a foregone
conclusion due to the fact that we were sitting together in the
waiting room of my obstetrician’s office. You see, I had every
intention in asking her to kindly inform Bryce that hot, loving,
penetrative sex during pregnancy was not only safe, but essential
in keeping the mother stress free and happy.

“Do you need
some water?” Bryce asked while draping his arm over my shoulder and
placing the other on my lap.

“No, I’m
fine.” I squeezed his hand with my own as I read an article
slandering Princess Kate for being too brazen in her choice of
sunbathing attire.
I mean really, give the poor woman a break.
Stupid paparazzi. Get out of the bush you’re hiding in and get a
life. Grrr, they annoy me.

Certain things
had really upset and annoyed me lately, and I mean
REALLY
upset and annoyed me. Things I wouldn’t normally
blink at, like privacy-invading paparazzi for one. But, there were
other things, like road-kill, and Stephanie dying on ‘The Bold and
The Beautiful’ which had me turned into a blubbering mess.

Cry Rape: The True Story of One Woman's Harrowing Quest for Justice by Bill Lueders
the Rider Of Lost Creek (1976) by L'amour, Louis - Kilkenny 02
The Painted Lady by Barbara Metzger
Captured Again by L.L. Akers
LetMeWatchYou by Emma Hillman
First They Killed My Father by Loung Ung
Time of the Beast by Geoff Smith
The Stranger: The Heroes of Heyday (Harlequin Superromance No. 1266) by Kathleen O'Brien
Insiders by Olivia Goldsmith
Frontier Woman by Joan Johnston