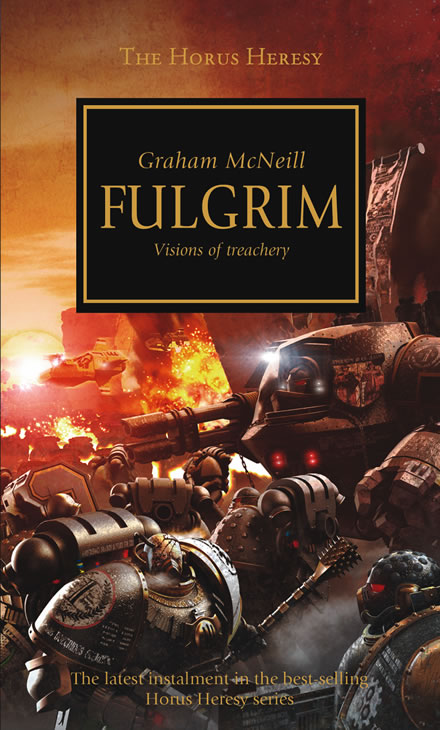 It is a time of legend.

Mighty heroes battle for the right to rule the galaxy. The vast armies of the Emperor of Earth have conquered the galaxy in a Great Crusade – the myriad alien races have been smashed by the Emperor’s elite warriors and wiped from the face of history.

The dawn of a new age of supremacy for humanity beckons.

Gleaming citadels of marble and gold celebrate the many victories of the Emperor. Triumphs are raised on a million worlds to record the epic deeds of his most powerful and deadly warriors.

First and foremost amongst these are the primarchs, superheroic beings who have led the Emperor’s armies of Space Marines in victory after victory. They are unstoppable and magnificent, the pinnacle of the Emperor’s genetic experimentation. The Space Marines are the mightiest human warriors the galaxy has ever known, each capable of besting a hundred normal men or more in combat.

Organised into vast armies of tens of thousands called Legions, the Space Marines and their primarch leaders conquer the galaxy in the name of the Emperor.

Chief amongst the primarchs is Horus, called the Glorious, the Brightest Star, favourite of the Emperor, and like a son unto him. He is the Warmaster, the commander-in-chief of the Emperor’s military might, subjugator of a thousand thousand worlds and conqueror of the galaxy. He is a warrior without peer, a diplomat supreme.

As the flames of war spread through the Imperium, mankind’s champions will all be put to the ultimate test.

H
ORUS
, Primarch of the Sons of Horus, the Warmaster

V
ULKAN
, Primarch of the Salamanders

A
NGRON
, Primarch of the World Eaters

O
RMOND
B
RAXTON
, Emissary of the Administration of Terra

E
VANDER
T
OBIAS
, Archivist of
The Pride of the Emperor

‘That which causes us trials shall yield us triumph, and that which makes our hearts ache shall fill us with gladness. For the only true happiness is to learn, to advance and to improve. None of this could happen without rejecting error, ignorance and imperfection. We must pass out of the darkness to reach the light!

— The Primarch Fulgrim,
Attainment of Perfection

‘The only true paradises are those that are lost to us…’

— Pandoras Zheng, Philosopher Designate to the Autarch of the 9th Yndonesic Bloc

‘T
HE DANGER FOR
most of us,’ Ostian Delafour would say on those rare occasions when he was coaxed to speak of his gift, ‘is not that our aim is too high and we miss it, but that it is too low and we hit it.’ He would then smile modestly and attempt to recede into the background of whatever conversation was underway feeling exposed under the spotlight of adulation, and uncomfortable with the attention.

Only here in his chaotic studio, surrounded by scattered piles of chisels, hammers and rasps, chipping away at the marble with deft strokes to create wonders, did he feel comfortable. He stepped away from the block of stone that stood in the centre of his studio and ran a hand across his high forehead and through his short, tightly curled, black hair as he took in the measure of this latest session.

The marble column was a gleaming white rectangle, some four metres tall, its surfaces as yet unblemished by chisel or rasp. Ostian circled the marble, running his silver hands across its smooth surface, feeling the structure within and picturing where he would make the first cut into the stone. Servitors had brought the block up from the
Pride of the Emperor
’s loading bays a week ago, but he had yet to complete his visualisation of how he would bring forth his masterpiece from the block.

The marble had come to the Emperor’s Children’s flagship from the quarries at Proconnesus on the Anatolian peninsula, where much of the stonework that comprised the Emperor’s palace had been sourced. The block had been hand quarried from Mount Ararat, a rugged and inaccessible peak, but one known to contain rich deposits of pure white marble. Its value was incalculable and only the influence of the Primarch of the Emperor’s Children had secured its shipping out to the 28th Expedition.

He knew others called him a genius, but Ostian knew that his hands were but the means of freeing what already lived within the marble. His skill (modesty forbade him from calling his talent genius) lay in seeing what the finished product would be before he laid so much as the first subbia upon the stone. The marble not yet carved could hold the form of every thought the artist could conceive.

Ostian Delafour was a slight man with a thin, earnest face and narrow, long fingered hands sheathed in silver metal that gleamed like mercury and which constantly fidgeted with whatever came to hand, as though the digits had a life beyond that dictated to them by their master. He wore a long white smock over a finely cut suit of black silk and cream shirt, the formal nature of his clothes at odds with the untidy workshop in which he spent most of his time.

‘I should hope so,’ said a woman’s voice behind him. ‘Bequa will have a conniption if we’re late for her recital, you know how she gets.’

Ostian smiled and said, ‘No, Serena, I meant I’m ready to begin sculpting.’

He turned and undid the ties holding his smock, lifting it over his head as Serena d’Angelus swept into his studio like one of the terrible matriarchs played so well by Coraline Aseneca. She tutted in distaste at the scattered tools, ladders and scaffolds. Ostian knew that her own studio was as neat and immaculate as his was disordered; the paints stacked neatly by colour and tone to one side, and her brushes and palette knives, as spotless and sharp as the day she had first acquired them, on the other.

Short and with the kind of attractiveness that completely eluded her as to why men found her desirable, Serena d’Angelus was perhaps the greatest painter of the Remembrancer order. Others favoured the landscapes of Kelan Roget, who travelled with the 12th Expedition of Roboute Guilliman, but Ostian felt that Serena’s skill was the greater.

Even if she doesn’t think so,
he thought, stealing a glance at the long sleeves of her dress.

For Bequa Kynska’s recital, Serena had chosen a long, formal gown of cerulean silk with an unfeasibly tight gold basque that accentuated the swell of her breasts. As always, she wore her hair unbound, the long, raven-dark tresses reaching to her waist and framing her long, oval face and dark almond-shaped eyes perfectly.

‘You look beautiful, Serena,’ he said.

‘Thank you, Ostian,’ said Serena, standing before him and fussing with his collar. ‘You, however, look as though you’ve just woken up in that suit.’

‘It’s fine,’ protested Ostian as she undid his necktie and painstakingly retied it.

‘Fine, darling, is not good enough,’ said Serena, ‘as well you know. Bequa will want to preen once this damn recital is over and I won’t have her saying we
artists
embarrassed her by looking shabby and bohemian.’

Ostian grinned. ‘Yes, she does have rather a dim view of the practical arts.’

‘It comes of a pampered upbringing in the hives of Europa,’ said Serena. ‘And did I hear you say that you were ready to begin sculpting?’

‘Well I’m sure Lord Fulgrim will be glad to hear that,’ said Serena. ‘I hear he had to ask the Emperor personally to have that stone shipped all the way from Terra.’