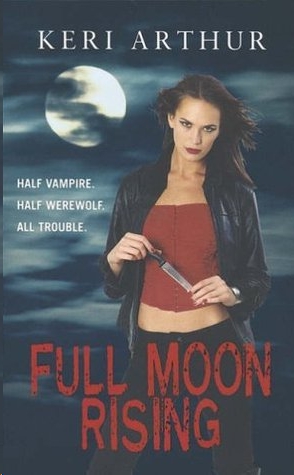 THIS BOOK IS DEDICATED TO THE FOLLOWING PEOPLE:
Linda, for teaching me so much
Miriam, for taking me that final step
The Sock Monkeys and the Lulus--great writers
one and all

T
he night was quiet.

Though it was after midnight, it was a Friday night, and Friday nights were usually party nights--at least for those of us who were single and not working night shift. This section of Melbourne wasn't exactly excitement city, but it did possess a nightclub that catered to both human and nonhumans. And while it wasn't a club I frequented often, I loved the music they played. Loved dancing along the street to it as I made my way home.

But tonight, there was no music. No laughter. Not even drunken revelry. The only sound on the whispering wind was the clatter of the train leaving the station and the rumble of traffic from the nearby freeway.

Of course, the club was a well-known haunt for pushers and their prey, and as such it was regularly raided--and closed--by the cops. Maybe it had been hit again.

So why was there no movement on the street? No disgruntled partygoers heading to other clubs in other areas?

And why did the wind hold the fragrance of blood?

I hitched my bag to a more comfortable position on my shoulder, then stepped from the station's half-lit platform and ran up the stairs leading to Sunshine Avenue. The lights close to the platform's exit were out and the shadows closed in the minute I stepped onto the street.

Normally, darkness didn't worry me. I am a creature of the moon and the night, after all, and well used to roaming the streets at ungodly hours. That night, though the moon rode toward fullness, its silvery light failed to pierce the thick cover of clouds. But the power of it shimmered through my veins--a heat that would only get worse in the coming nights.

Yet it wasn't the closeness of the full moon that had me jumpy. Nor was it the lack of life coming from the normally raucous club. It was something else, something I couldn't quite put a finger on. The night felt wrong, and I had no idea why.

But it was something I couldn't ignore.

I turned away from the street that led to the apartment I shared with my twin brother and headed for the nightclub. Maybe I was imagining the scent of blood, or the wrongness in the night. Maybe the club's silence had nothing to do with either sensation. But one thing was certain--I had to find out. It would keep me awake, otherwise.

Of course, curiosity not only killed cats, but it often took out inquisitive werewolves, too. Or, in my case, half weres. And my nose for trouble had caused me more grief over the years than I wanted to remember. Generally, my brother had been right by my side, either fighting with me or pulling me out of harm's way. But Rhoan wasn't home, and he couldn't be contacted. He worked as a guardian for the Directorate of Other Races--which was a government body that sat somewhere between the cops and the military. Most humans thought the Directorate was little more than a police force specializing in capture of nonhuman criminals, and in some respects, they were right. But the Directorate, both in Australia and overseas, was also a researcher of all things nonhuman, and its guardians didn't only capture, they had the power to be judge, jury, and executioner.

I also worked for the Directorate, but not as a guardian. I was nowhere near ruthless enough to join their ranks as anything other than a general dogsbody--though, like most of the people who worked for the Directorate in
any
capacity, I had certainly been tested. I was pretty damn happy to have failed--especially given that eighty percent of a guardian's work involved assassination. I might be part wolf, but I wasn't a killer. Rhoan was the only one in our small family unit who'd inherited those particular instincts. If I had a talent I could claim, it would be as a finder of trouble.

Which is undoubtedly what I'd find by sticking my nose where it had no right to be. But would I let the thought of trouble stop me? Not a snowflake's chance in hell.

Grinning slightly, I shoved my hands into my coat pockets and quickened my pace. My four-inch heels clacked against the concrete, and the sound seemed to echo along the silent street. A dead giveaway if there
were
problems ahead. I stepped onto the strip of half-dead grass that separated the road from the pavement and tried not to get the heels stuck in the dirt as I continued on.

The street curved around to the left, and the run-down houses that lined either side of the road gave way to run-down factories and warehouses. Vinnie's nightclub sat about halfway along the street, and even from a distance, it was obvious the place was closed. The gaudy red-and-green flashing signs were off, and no patrons milled around the front of the building.

But the scent of blood and the sense of wrongness were stronger than ever.

I stopped near the trunk of a gum tree and raised my nose, tasting the slight breeze, searching for odors that might give a hint as to what was happening up ahead.

Beneath the richness of blood came three other scents--excrement, sweat, and fear. For those last two to be evident from that distance, something major had to be happening.

I bit my lip and half considered calling the Directorate. I wasn't a fool--not totally, anyway--and whatever was happening in that club
smelled
big. But what would I report? That the scent of blood and shit rode the wind? That a nightclub that was usually open on a Friday night was suddenly closed? They weren't likely to send out troops for that. I needed to get closer, see what was really happening.

But the nearer I got, the more unease turned my stomach--and the more certain I became that something was very wrong inside the club. I stopped in the shadowed doorway of a warehouse almost opposite Vinnie's and studied the building. No lights shone inside, and no windows were broken. The metal front doors were closed, and thick grates protected the black-painted windows. The side gate was padlocked. For all intents and purposes, the building looked secure. Empty.

And if the thick smell of blood and sweaty humanity that accompanied his sickly scent was anything to go by, he wasn't alone.
That
I could report. I swung my handbag around so I could grab my cell phone, but at that moment, awareness surged, prickling like fire across my skin. I no longer stood alone on the street. And the noxious scent of unwashed flesh that followed the awareness told me exactly who it was.

I turned, my gaze pinpointing the darkness crowding the middle of the road. "I know you're out there, Gautier. Show yourself."

His chuckle ran across the night, a low sound that set my teeth on edge. He walked free of the shadows and strolled toward me. Gautier was a long, mean stick of vampire who hated werewolves almost as much as he hated the humans he was paid to protect. But he was one of the Directorate's most successful guardians, and the word I'd heard was that he was headed straight for the top job.

If he did get there, I would be leaving. The man was a bastard with a capital B.

"And just what are you doing here, Riley Jenson?" His voice, like his dark hair, was smooth and oily. He'd apparently been a salesman before he'd been turned. It showed, even in death.

"I live near here. What's your excuse?"

His sudden grin revealed bloodstained canines. He'd fed, and very recently. My gaze went to the nightclub. Surely not even he could be
that
depraved. That out of control.

I scrubbed a hand across my nose, and half wished--and not for the first time in my years of dealing with vampires--that my olfactory sense wasn't so keen. I'd long ago given up trying to get
them
to take regular showers. How Rhoan coped with being around them so much, I'll never know.

"You only walk the streets when you've been set loose to kill," I said, and motioned to the club. "Is that what you've been sent here to investigate?"

"No." His brown gaze bored into mine, and an odd tingling began to buzz around the edges of my thoughts. "How did you know I was there when I had shadows wrapped around my body?"

The buzzing got stronger, and I smiled. He was trying to get a mind-lock on me and force an answer--something vamps had a tendency to do when they had questions they knew wouldn't be answered willingly. Of course, mind-locks had been made illegal several years ago in the "human rights" bill that set out just what was, and wasn't, acceptable behavior from nonhuman races when dealing with humans. Or other nonhumans for that matter. Trouble is, legalities generally mean squat to the dead.

But he didn't have a hope in hell of succeeding with me, thanks to the fact I was something that should not be--the child of a werewolf
and
a vampire. Because of my mixed heritage, I was immune to the controlling touch of vampires. And that immunity was the only reason I was working in the guardian liaisons section of the Directorate. He should have realized that, even if he didn't know the reason for the immunity.

"Hate to say this, Gautier, but you haven't exactly got the sweetest scent."

Damn. So he was. "Some scents are stronger than the wind to a wolf." I hesitated, but couldn't help adding, "You know, you may be one of the undead, but you sure as hell don't have to smell like it."

Forever Hers by Walters, Ednah
Love Will Find a Way by Barbara Freethy
The Grays by Strieber, Whitley
The Name of the Rose by Umberto Eco
Messages from the Deep by Theo Marais
Different Loving: The World of Sexual Dominance and Submission by Brame, Gloria G., Brame, William D., Jacobs, Jon
Primal Heat by Kimber White
Earthbound by Aprilynne Pike
Mine Are Spectacular! by Janice Kaplan
Catch 'n' Kiss (Are You Game?) by Cahill, Rhian