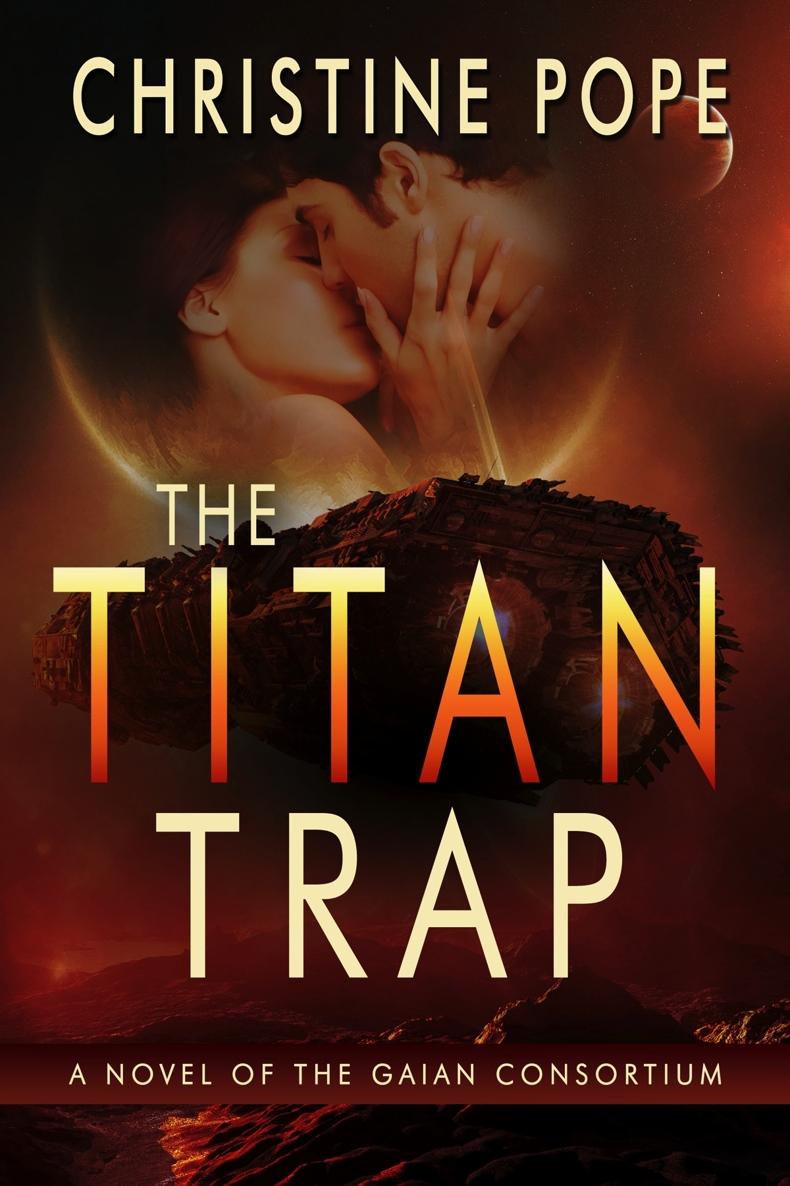 A NOVEL OF THE GAIAN CONSORTIUM

If You Enjoyed This Book…

This is a work of fiction. Names, characters, places, and incidents are either the product of the author’s imagination or are used fictitiously. Any resemblance to actual events, places, organizations, or persons, whether living or dead, is entirely coincidental.

All rights reserved. No part of this book may be reproduced in any form or by any electronic or mechanical means, including information storage and retrieval systems — except in the case of brief quotations embodied in critical articles or reviews — without permission in writing from its publisher, Dark Valentine Press.

Please contact the author through the form on her website at
www.christinepope.com
if you experience any formatting or readability issues with this book.

Cassidy Evans watched the approaching yellowish-orange sphere and thought, not for the first time,
I really need to get a better gig.

All right, so she hadn’t actually
chosen
to make the monthly supply run to the maximum-security prison on Titan. No, she’d inherited the contract, along with the aging freighter she now piloted, and since she didn’t have many alternatives, she hadn’t deviated from the schedule, had kept making the loop from the supply depot on the Moon to Titan and back again. It was tedious…okay, mind-numbingly dull…but it paid the bills. Mostly. The
Avalon
, which her father had named because of a maudlin longing for his family’s homeland of Wales (never mind that he’d never set foot there), was now older than Cassidy herself, and thirty years could put a lot of wear and tear on a girl.

Lately it seemed that most of her income went straight back into the ship, paying for the repairs to keep it limping along so it could continue to earn even the meager rates the Consortium’s corrections division was willing to offer. Every once in a while she contemplated selling the aging freighter and using the money to buy her passage to one of the colonies the Gaian Exploration Commission was continually opening up, just so she could start over, but she wasn’t sure the
Avalon
would even fetch that much. Never mind that the GEC didn’t much care for single colonists. It preferred families so all those husbands and wives could keep producing more children to populate all those new worlds.

Yes, she knew there were shady organizations out there that, for a fee, would match up singletons such as herself so they could have quickie weddings and then apply for expedited colonist status, but Cassidy wasn’t quite that desperate.

The comm beeped, and she pushed the button to accept the incoming call.

Protocol satisfied, the man relaxed into a smile, then continued, in a much warmer tone, “Welcome back, Cassidy. You ever going to let me buy you that drink?”

“Now, Dale, you know I never mix business and pleasure.”

“I keep hoping maybe I can get you to change your mind about that.”

“Not until you can offer something better than the depot on Hyperion.”

Titan itself housed the prison facility and nothing else; all support personnel and their families lived in the domed outpost on Hyperion Base, which didn’t have much to offer beyond breathable air, a lackluster commissary, and an even worse cafeteria-slash-pub. Dale had been flirting with her ever since her first solo run here, and she did find him moderately attractive, but her current desperation wasn’t quite overwhelming enough to allow her to settle for a drab existence on Hyperion, where she’d be lucky to share a conjugal visit every ten days, since that was how often personnel were cycled in and out of the MaxSec facility to get their Consortium-mandated three-day break.

“Wish I could, beautiful, but I’m not seeing the inner worlds for another two years. Not until my contract’s up.”

“Then I’ll take a rain check, and you can ask me again in two years.”

He laughed, although Cassidy thought she heard something hollow in it. They’d been doing this same song and dance for the past three years, and nothing had changed. It was fine. The flirtation at least helped to break up the monotony, even though she knew nothing would come of it.

“All right, Captain Evans, we have you on final approach. Protocol Alpha.”

“Copy that, Logistics. I’ll be there before you know it.”

“Protocol Alpha” simply meant that she would approach her designated hangar, dock, and wait for the automated carts to trundle into her cargo hold and remove the food, clothing, weapons, ammo, and any other items corrections had mandated be transported on this supply run. Xanadu Station was a supply depot and nothing more; the actual prison was located some twenty kilometers away. It was set up that way on purpose, as the corrections department wanted to make sure that the supply depots and the ships that docked there regularly could not be a tempting target, a means of escape.

Of course, no one had ever escaped the MaxSec facility, let alone managed to cross twenty kilometers of some mighty inhospitable territory, methane lakes and all, so Cassidy thought the whole setup was overkill at its finest. Not that anyone would ask for her opinion.

She’d done this so often that she really didn’t have to think about it anymore — come in slowly, slicing through the moon’s thick atmosphere, letting the beacons guide the ship in for the final leg until it came to a rest in a hangar. No point in making the hangar livable, as she — or anyone else — wasn’t expected to set foot outside the ship, and the automated carts certainly didn’t need to breathe.

Maybe that was the worst of it, that she came all the way here, ten days in, ten days back to the Moon, ten days’ rest there, and never saw one single solitary person face to face. Her interactions with Dale, or, more rarely, Pablo or Roy, were always over the comm. She’d never met them in person, didn’t know if they were short or tall or something in between. They were just disembodied faces on a screen.

So when she heard footsteps coming down the
Avalon
’s short central hallway, and a tall figure in an environmental suit burst into the cockpit, she thought she could be forgiven for letting out the beginnings of a scream before she managed to get hold of herself enough to stand up and say, “What the hell?”

The man pulled a shimmering titanium badge off the belt of his suit. “Security, ma’am. A prisoner managed to escape and was spotted coming toward Xanadu Station. We’re searching all ships.”

Dead in the Dog by Bernard Knight
Wall by Mary Roberts Rinehart
She's Not There by Mary-Ann Tirone Smith
According to Their Deeds by Paul Robertson
Crimson Roses by Grace Livingston Hill
Kickoff for Love by Amelia Whitmore
The Principal's Office by Jasmine Haynes
Sexy Stepbrothers by Amore, C.C.
The Port-Wine Stain by Norman Lock
Infected by Sophie Littlefield