In Wicked Chains (The Wicked) 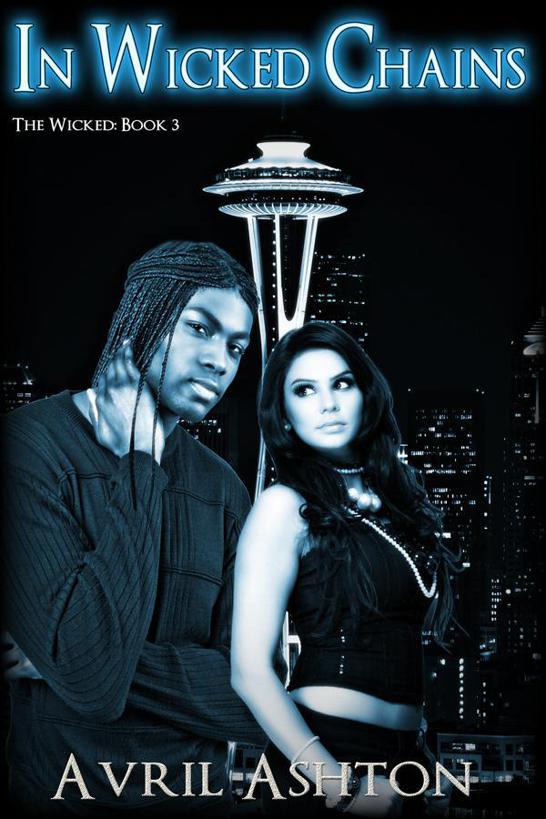 Everyone has secrets. Some people simply bury theirs deeper. Kingston Hughes is one of those. Painful childhood memories plague him, sending him spinning out of control and running from any kind of commitment. He pretends not to feel the pain and loneliness while indulging in sexual encounters with nameless, faceless women.

With the twist of a doorknob, his carefully cultivated façade is shaken by the woman he’d forbidden himself to need.

The daughter of a recently slain mobster, Elina Vicente has secrets, too. They weigh her down, stealing her strength and her dreams. She’s developed an unhealthy crush on Kingston though he’s never looked at her as anything but his sister’s quiet friend. When she walks in on him in a compromising embrace, Elina seizes the chance to move Kingston from her dreams and into her arms.

For only the second time in her life, Elina takes something just for her, but try as she and Kingston might, they can’t prevent their pasts from intruding. Shadows of pain and bitterness rise with a vengeance and the lovers will have to decide whether to break free or remain bound…In Wicked Chains.

Elina Vicente hurried across the empty bar of
Club
Wik’d
, the soles of her black Converse squeaking on the linoleum floor. The bartender wiped the counter with a rag and nodded as she sped past, no questions asked, not that he’d be able to stop her if he tried. Not tonight.

She’d finally made up her mind, set her sights on her prize, and there’d be no talking her down. The target of her interest was upstairs and she had to get to him before Sasha showed up. Elina and her best friend had a date for brunch, then shopping, but first things first.

Taking the steps two at a time, she ran up to the second floor, silently thanking
Dios
for Sasha. If not for her mouthy friend, Elina would be cooped up in her apartment, living off cereal and toast.

Her father must be rolling in his grave. This was no way for a Vicente to live. Good thing
el hijo de puta
couldn’t say anything at all.

She reached the second floor landing and took a breath to calm her erratic nerves. Thinking about the bastard who fathered her always made her hyperventilate. Elina pursed her lips and approached the office of the man she came to see. As she drew closer, muted sounds reached her ears, moans and groans.

Elina frowned. She closed her hand over the doorknob, eased it open and stared.

Kingston Hughes sat on the edge of his desk, jeans around his ankles, with a naked woman between his knees. Head thrown back, chest heaving, Kingston tugged on the woman’s hair as she pleasured him with her mouth.

Elina’s knees buckled. She’d been too late. Someone else was once again in her spot, taking her place.

The woman kneeling at Kingston’s feet devoured him with obvious relish, saliva dripping down her chin. A thick leather belt bound her hands behind her back.

Anger and something else burned Elina’s skin, hardening her nipples and slicking her inner thighs. The bastard had no idea what he did to her,
none
.

Elina’s gaze flew from the woman on the floor to his face, but his eyes remained closed. She tightened her fingers on the doorknob, unable to tear herself away. Her heart hurt, but her clit pulsed.

Betrayed by her body and Kingston.

“Mmm.” The woman’s head bobbed faster, urged on by Kingston’s hold on the back of her neck.

“I’m coming.” The rasp of Kingston’s voice sparked a blaze under Elina’s skin. “You’ll drink it all up, won’t you? Be a good girl and let me see you swallow.”

His harsh words, like cut glass on jagged metal, sent sweat trickling down Elina’s spine. She wanted to rub between her legs, soothe the ache there, but more than that, she wanted to scream and yell. Her fantasies were playing out before her eyes, except it should be her on her knees tasting Kingston, not some nameless, faceless woman.

“Ung, uh-huh.” The woman hollowed her cheeks as Kingston finally opened his eyes and looked down at her. His movements turned rough and uncoordinated as he thrust his hips forward, burying his cock down her throat.

Elina swallowed and shut her eyes. If she concentrated real hard, she could pretend to taste him. She inhaled deeply, fighting to get the smell of him, his musk, into her lungs.

“Shit.” His massive body shuddered, hips jerked. The woman gurgled, choked, but kept on sucking him. His seed ran out the corners of her mouth, dripping down her chin.

Elina squeezed her thighs together and moaned.
It should be me
. All the months she’d been sure she saw something there, something more in his dark eyes whenever he looked at her. He went out of his way to ignore her, pretend not to look, but he had to know. He had to know she cared. Yet he went to somebody else when she was right there, available.

She’d waited for him to make a move. Fed up with waiting for Kingston to come to her, she’d come to him and this is what she got.

A frustrated sound left her throat, louder than she intended. Kingston’s head swung around to the doorway. His heavy-lidded gaze flew wide when he spotted her. Elina staggered backward, a trembling hand covering her mouth. He opened his mouth, and she ran.

Idiota
. Shame washed over her as she dashed back down the stairs. Did he still see her as only Sasha’s quiet friend? She didn’t think so, not after all the times she caught his unguarded gaze on her. He wanted her.

Maybe he didn’t want to want her. She was damaged, but Elina saw him as the man who made her feel things, who made her want. Three years after her life blew apart, she felt again, and for the wrong man.

She burst into the bar as Sasha entered.

Elina brushed past her and out the open door with a choked sob. She’d lose Sasha, too, if her friend ever found out about Elina’s feelings for Kingston.

“Whoa. E, wait up.” Sasha’s heels clicked on the ground as she ran after Elina.

Elina slowed to a stop beside her car and hastily brushed at her damp eyes.

“Hey.” Sasha settled a hand on her shoulder. “Look at me.”

Resigned, Elina turned slowly. Sasha removed her sunglasses and frowned up at her. The concern in her eyes made Elina want to weep even more. She hiccupped.

“What’s wrong? Why are you crying?”

Movement at the club’s entrance caught Elina’s eye. Kingston stood framed in the entranceway, unbound braids around his shoulders, buckling his belt.

Sasha followed her gaze and frowned. “Did Kingston do something to you? Did he hurt you?”

“Get in the car.” Her friend opened her mouth. “Now.” Elina slid behind the wheel and started the vehicle, pulling away as Sasha hopped in and slammed the door.

“What the hell is going on?” Sasha buckled her seatbelt and threw her handbag in the backseat.

Elina bit her lip and sped out of the club’s parking lot. She eyed the rearview mirror. Kingston stood in the space she’d pulled out of, arms crossed, staring after them. Silence reigned as Sasha sat beside her patiently, glancing from Elina to the road ahead, and back.

“
Lo siento
,” Elina said finally. If Sasha no longer wanted to be her friend, she’d deal with it. She’d probably broken some kind of sacred law between best friends.
Thou shall not lust after your best friend’s brother, no matter how much he stars in your nighttime
fantasies
.

Sasha sighed. “You’re scaring me. You know that, right? I’ve never seen you like this before.”

“I know and I’m sorry.” Elina gripped the steering wheel to hide her trembling fingers. “I-I didn’t mean for it to happen, it just did.”

“What did?” Sasha’s voice rose. “Fuck, E, you’re not making any sense.” She twisted in her seat to face Elina. “Stop speaking in riddles before I smack the shit out of you.”

Elina’s lips twitched. Sasha’s violent side always made her smile. “I saw something in Kingston’s office. He and a woman. They were…”

“They were what?” Suspicion laced Sasha’s words. “Tell me and I’ll kick his ass.”

“They were…she was on her knees.” Elina swallowed and forced out the words. “Naked. Pleasuring him with her mouth.” She wanted to say,
taking what was mine
.

Sasha’s mouth rounded, eyes widened. “Oh.” She faced forward and placed her head back on the headrest. “That’s what has you upset?”

“It should’ve been me,” Elina whispered. Sasha stiffened. She ignored her friend’s reaction and continued. “I’m the one who’s wanted him for months, pretending not to care. Pretending.”

Elina glanced at her. “I’m so sorry. I know I’ve broken your trust in me and I understand if you don’t…” Her voice broke. “If you no longer want to be my friend.”

Elina flinched at the barked order. She pulled over to the side of the road and sat, silent, waiting for Sasha’s reprimand.

“Look at me.” Sasha unbuckled her seatbelt and leaned over to grasp Elina’s shoulder.

Elina lifted her chin and met her friend’s gaze.

“You’re in love with my brother?”

Sasha slashed a hand through the air. “Stop apologizing. I’m not mad at you. Surprised, but not mad.”

“Really?” Elina perked up. “You’re not breaking up with me?”

Sasha chuckled. “No. I’m not breaking up with you, E. I’m sorry you had to see him with somebody else. Why don’t you just tell him how you feel?”

“I was. I gave up waiting for him to make a move, to come to me. That’s why I was there, to see him. To tell him how I feel.” She shook her head and turned away before Sasha saw the tears in her eyes. “I think he wants me, too, but then this happens. Maybe he can’t see past our friendship. Or maybe he can’t deal with who I am,” she whispered the last part

“You don’t know that.” Sasha took Elina’s hand in hers. “You can’t know what he thinks until you talk to him.”

Sasha sighed. “It’s your choice, but I think you should talk to him.” She grabbed her purse from the backseat and opened the car door. “Gimme a sec, I’ll be right back.”