Read Gambling On a Heart Online

Gambling On a Heart 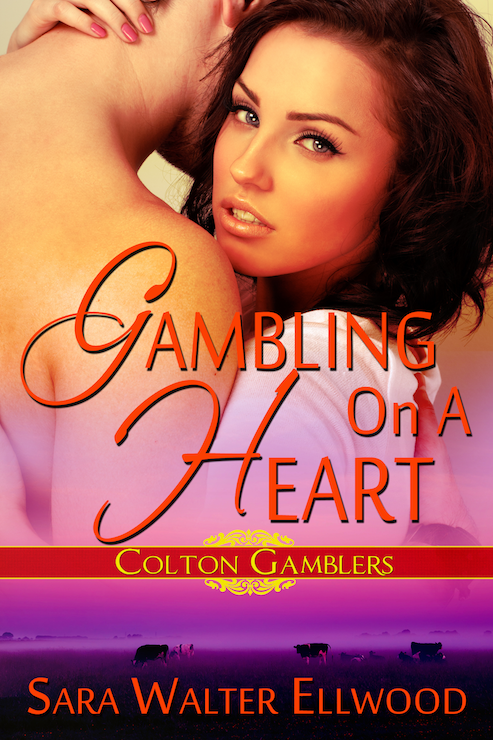 GAMBLING ON A HEART

Thanks to everyone who has helped make this book possible.

My friends and critique partners, D’Ann Lindun and Martha Ramirez, thank you for your wonderful critiques.

My amazing editor, Piper Denna, thank you for believing in me and for your guidance

In 1865, three disillusioned first cousins return from the battlefields of the defeated South to find their home in East Texas a shambles. Determined to make a new start, they head west. In the cowboy town of Dallas, Texas, they decide to pool the few silver dollars they have between them and enter into a poker game. With their gamble, they win over 100,000 acres of good grassland in Central Texas. Over the next century and a half, their descendents build a fortune in cattle and oil, but as time goes by, greed erodes their family bond.

“Have either of you seen Bobby?” Tracy Parker all but barked, and immediately lassoed the irritation. She might have a ton to do, but taking her crappy mood out on her brother and father wasn’t fair. “Lucinda needs him next for pictures.”

She dragged her feet up the wide front porch stairs of the Victorian house at Butterfly Ranch, feeling like the whole state of Texas was on her shoulders. And everyone knew Texas was bigger than the world.

She glanced at the groom, her brother Dylan, who sat in a cane rocker beside their father. Each of them had a glass of sweet tea–the drink of choice in Central Texas on a hot August Saturday–in their hands.

“Check inside. He has to be around here somewhere.” Dylan looked too at ease to be getting married in less than an hour, with his Stetson pulled low over his forehead and his legs stretched out and ankles crossed, showing off his custom crocodile boots. He pushed his Stetson back and smiled. “You need to take a chill pill, sis. You’re more nervous than I am.”

She narrowed her eyes on him. “Someone has to take the wedding seriously.”

“I am. I’m marrying the woman I want to spend the rest of my life with, and in February, I’m going to be a father. It’s the happiest day of my life.”

The sudden burn in her sinuses didn’t surprise her. She was so not going to start bawling. Today had to be perfect for Dylan and Charli, the type of wedding she would never have. Not wanting to think about her own messed up life, she hugged Dylan and smiled at her father. She shook her head at the picture her cowboy brother and city slicker father made sitting together drinking tea.

As she entered the coolness of the house, she heard the television on in the living room and headed in that direction.

Bobby sat on the couch flipping through channels. The shirttail of his Western shirt hung outside his creased new jeans. His vest and bolo tie were nowhere in sight.

Her eleven-year-old son looked up as she entered, and scowled. “I wanted to go with Dad this weekend. He was gonna take me to the Rangers game.”

Tracy took the TV remote from his hand and turned off the flat screen. She tossed the controller into the basket on the coffee table, then clasped her hands in front of her. “It’s more important to be here at Uncle Dylan and Aunt Charli’s wedding. Your dad can take you to a baseball game any time. What’s going to happen today will only happen once.”

He rolled his eyes and gave a longsuffering sigh. “Right. If you say so. But I still think it’s all dumb. Dad doesn’t think they’ll last longer than a year.”

She took another deep breath to calm her temper. Losing it now would only prove disastrous. Damn her ex-husband. Why would he say such a thing to a boy? “Bobby, this wedding is not stupid. Uncle Dylan and Aunt Charli love each other and want to share their special day with the people they love. Which includes you. Now, let’s go out before they wonder where we are.”

His jaw was set in the irritating reminder that he was Jake Parker’s son through and through. His hazel eyes flashed with defiance. “I still think all this wedding crap is stupid. You and Dad didn’t stay married and neither did Uncle Dylan and Aunt Brenda.”

She put her hands on her hips and glared at her son. “Robert Allan Parker, if you don’t get off that couch right this minute, I’m grounding you for a month.”

With a glower, he slowly pushed himself up to get off the couch, mumbling, “Dad wouldn’t make me do this.”

“Tracy, the photographer is getting impatient. She needs Bobby ASAP,” a familiar deep voice drawled behind her.

She turned to Zack Cartwright standing in the doorway, unsmiling, handsome and tall. He seemed taller than he had been back when he was eighteen. As a saddle bronco rider, he’d stood loose and relaxed. Now, he was all perfect posture. The Marines. The same thing had happened to Dylan after he’d joined the Army.

She forced herself to meet the midnight blue gaze of the only man she’d ever loved. “Thank you.”

Zack wore the same Texas tuxedo as her brother–tight new blue jeans, white Western shirt, vest and custom boots. But the silver belt buckle was his own. A trophy from his rodeo days. He held his tan Stetson in his hand at his side. She tried not to notice how the stubborn curl of his golden blond hair fell over his tanned forehead. He’d always had that lock, but back when she’d run her fingers through his thick hair, it had been a lot longer.

She slammed a lid on the memories. The past couldn’t be changed.

Bobby sulked beside her. “I hate getting my picture taken.”

Zack turned with the thumb of his free hand hooked on a belt loop. “Today isn’t about you, now is it? Today is your aunt and uncle’s day, and they want pictures of you.” He nodded his chin toward the archway. “Now, go out there and do what Mrs. Hudson tells you to do.”

She shooed Bobby toward the door. “Go.”

Zack put his hand on Bobby’s shoulder to stop him as he passed. “Where’s your tie and vest? And tuck in your shirt.”

He looked over his shoulder at Tracy, then up at Zack. “You ain’t my boss.”

“No, I’m not, but we are on the same team out there. You have to walk your grandma down the aisle and stand beside me with your uncle. That’s a pretty important job. And I can’t imagine you’d want to embarrass your uncle and aunt or your momma.”

Her heart stumbled over a beat when his gaze connected with hers.

With another glare at her, Bobby huffed and crossed the room to where he’d dumped the tie and vest. After tucking in his shirt, he headed out of the room.

Once the front door slammed behind Bobby, she flopped down on the couch with an exasperated sigh.

Zack tapped his hat against his lean leg and looked everywhere but at her. “He’s got quite an attitude.”

She laughed, but didn’t feel any mirth. “You don’t know the half of it. Things have really gotten worse the past couple of months.”

“Want to talk about it?” He sat in the overstuffed chair by the windows. She imagined him doing the same thing in a small room at the sheriff’s office with a victim of some crime.

Oh, great.
Was he wondering how soon her son would end up with a rap sheet? She rubbed her suddenly damp palms together in her lap. “Let’s just say his major problem is Jake and I have very different ideas about parenting.”

Zack squared his shoulders and was all perfect posture–just as one would expect the ex-Marine sheriff to do. Where did Zack Cartwright, cowboy, go?

“So, Jake still lives by the motto rules are bad, while you try to lay down the law and set a good example?”

She forced a smile and met his gaze. “You got it. Neither Dylan nor I would have
ever
thought of trying to get away with half the stuff Bobby tries to. Sometimes I’m at my wit’s end. Dad has given him a talking to, but it only worked for a few days.”

He laughed and the deep rumble tickled along her senses. “The general losing his touch?”

She matched his smile. He’d had a few run-ins with General Robert Quinn back when she and Zack had dated. Her father had taken an almost instant dislike to Zack, a rodeo champion, especially after he’d kept her out all night Christmas Eve their senior year of high school. Of course, he absolutely hated her next boyfriend, Jake Parker.

“Maybe.” She tugged on her short skirt. “I’d better make sure Charli doesn’t need me. She chased Mom and me away, but Mom’s back in there fussing.”

“I think your mother should have been a bullfighter instead of a chef.”

“A head chef is more tenacious than a bullfighter. But she could be the bull.”

He chuckled again, and her heart pinched painfully. God, how she missed his easy laugh.

She had to escape him. Being expected to spend the rest of the afternoon with him at her side was hard enough. She stood, pulling on the short skirt of her dress again. Why had she let Charli talk her into wearing this scrap of silk? When she spared a glance at Zack, he was staring at her.

“I like the dress.” He stood in a fluid motion that defied his six foot, three inch frame.

Subtle heat prickled her cheeks. “Thanks. Charli picked it out.” The slip dress was nothing she’d ever choose to wear on her six-foot, stick-figure skinny body.

“Well...” He cleared his throat and looked down at his hat. “You look good. See you later.”

As he put the hat on his head, he turned toward the doorway. Her heart galloped away. Had he just given her a compliment? “Yeah, see you soon.”

What had just gone down between them? She shook her head and walked to the master bedroom.

She knocked at Charli’s door and couldn’t keep from smiling when the bride opened it, spearing Tracy with an impatient look. Someday she hoped Bobby understood when marriage happened between two people who truly loved each other, it would last a lifetime.