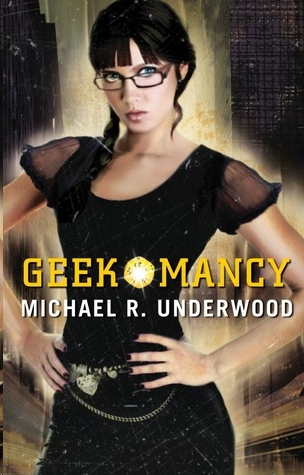 All rights reserved, including the right to reproduce this book or portions thereof in any form whatsoever. For information address Pocket Books Subsidiary Rights Department, 1230 Avenue of the Americas, New York, NY 10020.

The first one goes to Mom and Dad, who always believed

4. A Study in Sherlock

7. Mad Shopper What Shops at Midnight

21. You Have Chosen Medical Masochism

Epilogue: Shake It Out

Café Xombi was nestled gently (read: “squashed improbably”) between a high-art gallery, which seemed to never have anyone in it but still managed to stay open, and the around-the-corner side of a bank.

The owner-manager, Bryan Blin (Strength 14, Dexterity 11, Stamina 15, Will 15, IQ 16, and Charisma 14—Geek 6 / Barista 3 / Dad 4 / Entrepreneur 3), paid a premium for the location, just a half-block up a side street from one of the main drags in Pearson’s University District. Café Xombi was the city’s premier coffee shop/comic store/gamer hangout, and in a geek town like Pearson, that actually meant something.

The formula was simple. The café served a normal assortment of coffee for the walk-ins as well as geek-themed coffee and treats to help it stand out. Additionally, its decor and staff fostered a social atmosphere to help convince customers to pick up that role-playing game book or graphic novel they’d been on the fence about buying for the last three weeks. It was a perfect geeky home-away-from-home.

She got hit on, sure, but the guys were easy to let down, and no one had made a scene about it in a while. They came in, saw her across the room like they had just walked into a meet-cute, and then proceeded to try to cast her as their own Manic Pixie Dream Girl.

Ree fit the bill—visually, at least. She wore thick glasses (being legally blind and all), had long black hair that she kept braided in a variety of styles (to keep it out of people’s lattes), and had the “ethnically indeterminate” look that came from the mix of her Irish and Puerto Rican heritage. Ree’s figure was more boyish than bombshell, though, despite her teenaged prayers to fill out a C-cup.

In truth, Ree wasn’t anyone’s dream. She was a near-broke frustrated screenwriter who would rather just talk with a guy for an hour about the ideological condemnation of super heroes evident in Alan Moore’s comic work during the mid-to-late ’80s—without them going straight to imagining her naked.

Café Xombi was a twenty-by-twenty front room, with a small prep and office area in the back and a basement accessible from the street. Nearly every inch of the front room not devoted to walking space was filled with something. The front half of the store was dominated by tightly-packed round tables and their corresponding chairs. A tall shelf of graphic novels lined one wall, matching shelves filled with RPG books and miniatures on the other side. A six-foot-tall shelf-on-wheels held the comics, currently pushed forward to allow Ree to move out into the seating area. Bryan had painted the walls with a mural, decked with planets, spaceships, super heroes, and java-bean alien monsters, to round out the look.

As of eleven in the morning on this particular blustery Thursday, there had already been the normal AM rush of young techies and professionals stopping in for their triple mocha lattes and chocolate espresso breakfast bars and then . . . nothing.

And for Ree, that nothing was scary.

Taking a lap around the Internet on her phone, she was eager for distraction. Nothing useful in email, but she had three voicemails, including one from her dad.

Not dealing with that now,
she thought. She’d call him when she got home.

The other messages were from Priya and Anya. Ree didn’t think she could handle the outpouring of support from her friends right now. She just had to lie low until her heart put itself back together. A burst of emotion bubbled up in her mind.

Fuck you, Jay. “We’re not on the same path anymore,” my ass.

Red crept into the corners of Ree’s vision, and she flailed mentally, trying to find something to do, something to keep from losing her shaky equilibrium.

Ree looked over and saw Charlie, the other full-time cash-wrap monkey, straightening some comics and staring absently out the window. Ree squatted down and checked the food case, starting a mental list of what they’d need to bake to replenish the store.

As she was counting the Mario 1-UP cookies, a theremin-tune door chime rang, signaling another customer. Ree looked up to see a vaguely familiar young man in a polo shirt and khakis. He was on the skinny side, with medium-brown hair, a soft jaw, and the start of laugh lines. Ree was sure she’d seen him in the café before, but she didn’t remember anything in particular about him other than that he was one of the shy ones.

“Hello,” Ree said, but got no answer. The customer wove through the sea of tables silently and pulled an issue of
Action Comics
off the shelf, shifting his weight side-to-side as he read.

Ree turned to Charlie, who had come back to the counter. Charlie French (Strength 13, Dexterity 13, Stamina 15, Will 15, IQ 16, and Charisma 14—Geek 5 / Barista 2 / Social Media Ninja 4 / Trekker 2) was five-five, had sandy red-blond hair that was consistently a mess, and was in the top twenty for the “install a phone in my brain, please” wait-list.

Ree asked, “You want to start bake prep or should I?”

Charlie reached down to a coffee mug and drew out two d20s. Ree nodded and took one. Roll-offs solved nearly all trivial arguments at Café Xombi, per Bryan’s lead. Ree cupped the die in both hands, blew on it, and shook, warming up its inherent mojo. Charlie shook his d20 in one hand near his head, then threw. Ree rolled as well, and the dice kissed on the counter, Charlie’s nearly rolling off the far side. His read 13. Ree’s: 18.

Charlie sighed, then knelt to fiddle with the music station, an iPod permanently plugged in to their PA. Bryan was eight months into a XM discounted-rate trial, but Charlie only baked to Weird Al. He queued up
Running with Scissors
and set to work.

Ree slid around him and tried to get the customer’s attention. “Looking for anything in particular today?”

The customer looked up briefly at Ree, opened his mouth as if to speak, then looked down again, his cheeks red.

The Burning Day by Timothy C. Phillips
In for a Penny by Rose Lerner
The Horror in the Museum by H.P. Lovecraft
Flesh: Part Fourteen (The Flesh Series Book 14) by Corgan, Sky
Moron by Todd Millar
Pastime by Robert B. Parker
The Opposite House by Helen Oyeyemi
Infidel by Kameron Hurley
How Cassie Got Her Grind Back by Heather Rainier
Wind Walker by Terry C. Johnston