Read Gently with the Ladies Online 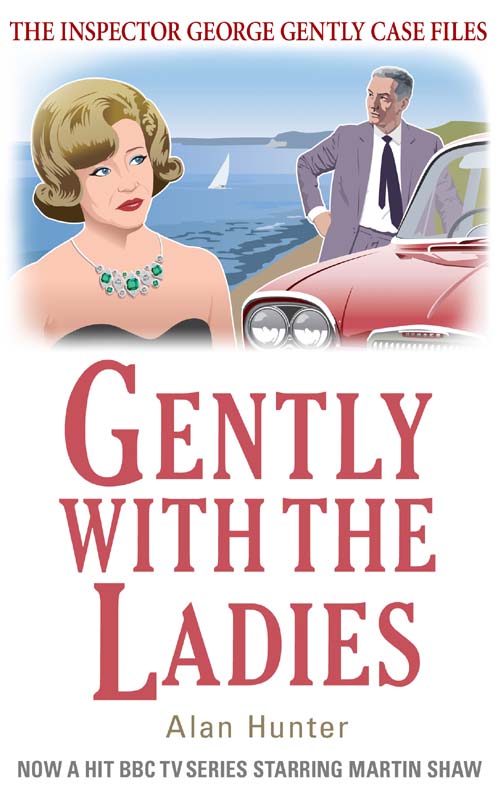 Alan Hunter
was born in Hoveton, Norfolk in 1922. He left school at the age of fourteen to work on his father’s farm, spending his spare time sailing on the Norfolk Broads and writing nature notes for the
Eastern Evening News
. He also wrote poetry, some of which was published while he was in the RAF during the Second World War. By 1950, he was running his own bookshop in Norwich. In 1955, the first of what would become a series of forty-six George Gently novels was published. He died in 2005, aged eighty-two.

Gently by the Shore

Gently Down the Stream

Gently Through the Mill

Gently in the Sun

Gently with the Painters

Gently to the Summit

Gently Where the Roads Go

Gently with the
Ladies

First published in the UK by Cassell & Company Ltd, 1965

This paperback edition published by Robinson,

The right of Alan Hunter to be identified as the author of this work has been asserted by him in accordance with the Copyright, Designs and Patents Act 1988

Gently looked curiously at this man, for whom the police had been searching three days. In a penthouse flat in Chelsea his wife, Clytie Fazakerly, had been found battered to death, and the divisional C.I.D. had little doubt who had done it. And now here he’d walked into Gently’s office, after waiting three hours down below: a shabby, tired, unkempt man, looking close to the end of his tether. ‘Nobody we know,’ desk had said on the phone. ‘Won’t give his name or his business. Do you want us to move him on, Chief?’ And Gently had nearly grunted: ‘Yes!’

‘You knew we were looking for you, Fazakerly?’

‘What does that mean?’

‘I didn’t know till I saw a paper this morning.’

‘Where have you been then?’

‘Off-shore, mostly.’ He made a weak motion with his hand. ‘In a yacht I hired at Rochester. You can check with the owners. Bossoms.’

And in fact he was dressed in dirty slacks and an old sweater, over which he was wearing a reefer jacket on which the stains of salt showed. He had a two-day growth of beard on his fine-boned, sallow face, and a nasty abrasion across the forehead which he’d come by recently. A tall man. He kept shifting his weight from foot to foot as he stood. You had the feeling that if you nudged him he’d just fall down and lie where he fell.

Fazakerly slumped into one. He sat resting his arms on his knees.

‘Then you won’t be surprised at what I’m telling you. You’re under arrest, and anything you say may be taken down and used in evidence.’

‘As long as you do,’ Gently said. ‘Perhaps now you’ll tell me why you’re here. This case is nothing to do with me.’

Fazakerly closed his eyes. ‘Because you’re my only chance,’ he said. ‘Because I know you’ll listen to me and maybe know I’m not lying.’

‘Then how does it help coming to me?’

Fazakerly didn’t reply at once, sat, eyes closed, leaning forward. He was all in, that was no act: around each eye was a bruise-like halo. And there was something familiar about him, something Gently couldn’t directly place. Had he met him before? He remembered no Fazakerly, and the name was not one easily forgotten.

‘You see . . . I know how you work. You’re not just hell-bent to make a case. Oh, you can put on the heavy policeman stuff, but that isn’t why you’re at the top. No . . . you care about what happens, you want the truth, all the truth.’

‘Thanks for the compliment, but it won’t help you.’

‘Then you’d best forget about it, Fazakerly. The case belongs to Q Division.’

‘If you just hand me over I’m a dead duck. For God’s sake, give me this one chance!’

Gently hesitated, phone in hand. This wasn’t the usual approach by any means. The quiver of entreaty in Fazakerly’s voice had to be genuine. He stared at Fazakerly uncertainly.

‘It is if you’re innocent.’

‘Please put that phone down. For five minutes.’

Gently looked at the phone. ‘All right,’ he said. He banged the phone back on its rest. ‘Now,’ he said. ‘Five minutes. But after that, you’re in a cell.’

Fazakerly lit a cigarette with hands that trembled. They were blistered and dirty hands and several of the nails were broken. He took a long drag into his lungs and it seemed to perk him up at little. He looked Gently in the eye. He had light brown eyes with golden flecks in them.

‘You nearly remember me, don’t you?’ he said.

If Gently felt a stab of surprise, it didn’t show in his face.

‘I’m not trying to make anything of it, but you’ll understand better for knowing. I’m a distant relative of Geoffrey Kelling’s. I was a guest at the wedding.’

So that was it! No wonder if Gently’s memory had let him down. It was twenty-five years since his sister’s wedding: Bridget had married the year war broke out.

‘A second cousin. I shook hands with you at the reception. I’m telling you this so you understand – I really do know how you work. I mean, you’re famous, we’re proud of the connexion, we read up your cases and trials. I didn’t come here by accident. I knew only you could help me.’

‘I’m sorry. I promise not to spread it around.’

‘It wouldn’t do you any good if you did.’

But it would, as Gently knew well: points were stretched for policemen’s relatives. Where they were concerned you double-checked and bent over backwards to give fair play. What was more, Inspector Reynolds of Q Division was an admirer of Gently’s, and the mere fact that Fazakerly had been to the great man would be a mark in his favour. Had Fazakerly guessed it, coming to Gently? No . . . that was too far-fetched.

‘Could you stand a coffee?’ he asked gruffly.

‘My God, yes. I’ve had nothing since yesterday.’

‘I planned on having breakfast ashore. Then I saw the paper and grabbed the first train.’

‘Harwich. I dropped my hook there at six this morning. You may not have noticed, but there’s been a blow on. I’ve been damned near over to Holland and back.’

Gently rang down for coffee and sandwiches. His five-minute limit had already gone west. Fazakerly, sure now of Gently’s attention, inhaled cigarette smoke for some moments. Then he said quietly:

‘But of course, that’s no alibi. I could have killed her before I left. That’s the trouble: I’m wide open. Opportunity, motive, I’ve got everything. So I must have someone who believes in me, who can look at it from my point of view. Who’ll take my word, that’s about it. On the pure facts, I’m sunk.’

Gently hunched his shoulders glumly. ‘So what are these pure facts,’ he said. ‘You quarrelled with your wife about another woman, you ran away, and she’s found dead.’

‘Yes.’ Fazakerly closed his eyes. ‘And don’t forget Clytie’s money. I’m a bum, a social parasite. I needed her money. That’s the clincher.’

‘Have you none of your own?’

‘Not a sou. Except what I pick up round the studios. I’m a photographer, you know, or I was once, and sometimes they put a job in my way. And Clytie, of course . . . she made me an allowance. Oh, my character won’t save me.’

‘No. Everything else I admit. Yes, she’d found out about Sarah Johnson, yes, there was a row, yes, I ran. Straight to Sarah, straight to Rochester. I wanted Sarah to say, let her divorce you.’

Fazakerly nodded. ‘Perhaps it was a bit too much to ask. Sarah doesn’t have any money, and I’m just one big bloody liability. I stink, you know. I really do. I ought to have gone out there and got drowned.’

The messenger arrived with a tray, which he placed on the desk nearest to Fazakerly. He stared interestedly at Fazakerly while Gently initialled the receipt-book. After he’d gone Fazakerly said dully:

Fazakerly shrugged and began to eat.

Gently smoked. It was only slowly that the implications of this business were becoming clear to him. Till a moment ago he was still seeing it as something he could toss straight back to the proper department. But was it so easy? From an official view, nothing else was required of him, in fact he’d be treading on people’s toes if he stepped outside procedure. But there was Geoffrey and Bridget too: sometime he’d have to tell them what happened, and a plea of procedure would sound pretty thin when they learned that Fazakerly had come to him for help. Oh, they’d be understanding and nice about it, but still, they wouldn’t be able to help wondering . . .

He watched resentfully while Fazakerly bolted the sandwiches and drank great gulps of steaming coffee. So he’d made a mess of things, this idle waster! But why did he have to drag Gently in too?

‘Right,’ he snapped. ‘If you didn’t kill her, perhaps you can tell me who did.’

Fazakerly shook his head, chewing on a sandwich. ‘Not the faintest,’ he mumbled, ‘unless it was Sybil.’

‘Sybil Bannister. She’s the bitch who lives in the flat below. But Sybil wouldn’t want to kill Clytie. Me perhaps, but not Clytie.’

Fazakerly swallowed some coffee. ‘Because I was superfluous, don’t you see? My God, you’re not dealing with decent people, you’re down in the depths, you’re stirring ordure. I haven’t been Clytie’s husband for years, not since Sybil moved in. She’s an old flame from Bristol. They were going strong together at school.’