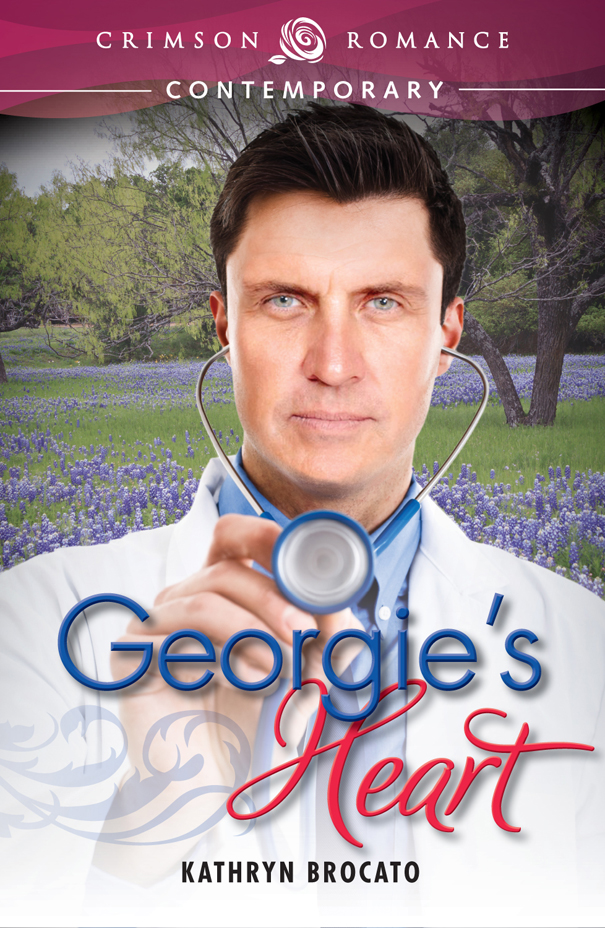 and gave me the idea for this book

A Sneak Peek from Crimson Romance

Georgeanne Hartfield stayed at her desk and kept on working. She had hoped skipping lunch with her coworkers would buy her some peace, but she feared she was about to be proven wrong. Worse, her stomach grumbled and complained because she hadn't expected to miss her lunch today, so she hadn't brought along a sandwich.

She bent over her work as she heard the back door to the Gant Medical Clinic open. If she was lucky, they had discovered some new topic to discuss.

“Listen to this.” Nurse Denise Devereaux appeared and laid the hardback book she held down flat on Georgeanne's desk with the air of one about to reveal a secret of the universe.

Georgeanne grimaced at the sight of the book her friend held so reverently. “I have work to do, Denise. I'm not getting paid to hear Fritzi Field's sexual advice.”

“You aren't getting paid to miss your lunch, either,” Denise returned. “Now pay attention, Georgie.”

“That's telling her, Denise.” Redheaded Angela Porter joined Denise in leaning over the counter in front of Georgeanne. “The rest of us would love being paid for listening to hints on improving our sex lives.”

“Quiet, y'all.” Sandra Whitney, a tiny blonde pixie in her starched nurse's uniform, joined the group and leaned over Denise's shoulder to study the book. “I want to hear this. Simply everyone is talking about that book.”

Georgeanne gave up. She smiled upon the other three women and propped her chin on one long, shapely hand. “Go ahead, Denise. I can see I won't be able to get a thing done until you're through.”

Georgeanne prayed Dr. Gant or Dr. Baghri would come in, even though she knew they were out for a long lunch. Whip-cracking doctors never came around when the clinic receptionist needed them to maintain order among the staff. The Gant Medical Clinic, which was located in the rural southeast Texas community of Fannett, usually stayed too busy for such frivolities as book readings.

Denise, the chief nurse at the Gant Clinic, drew in a deep, dramatic breath. She was a beautiful African-American woman with skin the color of milk chocolate and a figure fit for a Playboy magazine centerfold. “âIf your husband makes your life miserable and blames you because you can't have an orgasm on demand, he has no right to complain if you resort to a little acting every now and then.'”

“She's got a point.” Sandra leaned further over Denise's shoulder, her pale blonde hair brushing Denise's black pageboy, and peered at the book.

“Why all this uproar over a book on how to fake an orgasm?” Angela, the clinic's lab technician, wanted to know. “I don't have that sort of trouble.”

Her tone implied
Why would anyone have a problem, unless she's a psych case?
Georgeanne looked thoughtfully at the tall, slender redhead.

“Neither do I,” Sandra interjected, flushing. “But that doesn't mean I don't agree with Fritzi Field. Some women probably do have trouble. I mean â ”

“Then they should read
The Sensuous Woman
,” Angela interrupted. “Instead of wasting time learning how to fake it, they could be learning how to experience the real thing. Why all this uproar over something that's completely natural?”

Georgeanne never ceased to be amused at the rapid defensiveness of modern women when the subject of orgasm came up. Either every woman she knew experienced orgasm instantly, or every woman she knew lied. According to her friends at the Gant Clinic, sexual desire and orgasm behaved like an electrical switch. When you flipped the switch, lights turned on. Period.

“Childbirth is perfectly natural, too,” Georgeanne said, “and look at all the books out on it.”

“
Faking It
isn't about having an orgasm,” Angela argued. “It's about faking an orgasm. There's a difference.”

“Fritzi isn't talking about normal men,” Denise said. “She's talking about complete jerks. I should know. I was married to one. Listen to this. âWhy let your marriage be destroyed, when it's so easy to give him what he wants?

“âMany a man thinks a woman ought not to need foreplay. He thinks she ought to be ready the minute he touches her, as if the very thought of sex with him is all that's needed. Any suggestion that this may not be the way it works sends this man into a frustrated shouting and blaming fit.

The women looked at each other a moment in silent agreement when Denise finished reading that passage aloud.

“Who, indeed?” Georgeanne didn't look up from her current task of comparing a column of hand-written numbers to a copy of the column in a printed report, but she knew her cheeks glowed with telltale red her thick fall of shoulder-length brown hair might not entirely hide.

One would think that a twenty-eight-year-old woman who had been married to a man who resembled a young Robert Redford would have stopped blushing when she lost her innocence. But that wasn't the way things went with her face, Georgeanne thought with resentment. If anything, she blushed even more these days. Fritzi Field's incredible and unexpected popularity, both nationwide and inside the Gant Clinic, kept her cheeks flaming. Maybe she should claim a sunburn. Or a medical condition.

“That's what I say,” Sandra declared. “A man like that deserves whatever he gets.”

Angela snickered and flipped her red hair off her shoulders. “Are you kidding? He's getting a heck of a lot more than he deserves. Anyone following Fritzi Field's instructions will have the idiot thinking he's God's gift to womankind.” She stretched out long, white polyester-clad legs and leaned back on Georgeanne's desk. “Fritzi Field is going around telling women to award those stupid men some sort of bad-behavior prize if you ask me. She ought to be ashamed of herself.”

Georgeanne bit her full lower lip. A strange, empty feeling attacked her heart, almost as if she had stepped off a porch and found no step where one should have been.

How ridiculous. Not even she agreed with everything Fritzi Field said, so why should she feel upset when someone else didn't either?

“That isn't what Fritzi is saying â ,” Denise began.

Georgeanne heard with horror the respectful tone in which Denise said “Fritzi” and rushed into speech. “Fritzi Field isn't trying to say anything. She's interested in creating a controversy, because controversies sell books.” She added, in a barely audible voice, “I wouldn't be surprised if Fritzi Field turns out to be a man.”

“Boy, is she â or he â selling books,” Denise agreed. “They're trying to line her up for all the talk shows, but her agent says she wants to remain anonymous. If I had written
Faking It
, I'd go on every single talk show that would have me.”

Guilt, liberally mixed with fear, attacked Georgeanne like a battering ram to the solar plexus. She paled and stared down at the report in her hand.

Denise picked through the book and opened it at another marked spot. “You're just jealous because you didn't think of writing
Faking It
first. I know I am.”

“Yeah,” Angela said. “You're right about that much.” She folded her hands behind her frizzy red hair and gazed at the ceiling. “Do you know what I'd do if I had all that beautiful royalty money pouring into my scrawny little bank account? I'd buy myself a green Mustang convertible. That's what I'd do.”

“With that red hair and pale skin of yours?” Georgeanne looked up and focused on Angela's milky, freckled skin. “You know what Dr. Gant said to you about getting in the sun ever again in your young life.”

Angela ignored this comment. “I'd lose five pounds, and I'd buy a tiny black bikini with those high-cut legs, then I'd go cruising down the beach highway with the top down.”

“Four walls and a roof,” Georgeanne said. “That's the kind of sunscreen Dr. Gant told you to use.”

“If you ever made that much money, you'd gain five pounds celebrating at the nearest bar, Angie,” Denise countered. “Do you know what I'd do? I'd buy myself a lot and build a beach cabin in the ritzy section of the beach. Then I'd lose five pounds and put on my red bikini with the high-cut legs and get a tan out on my own deck.”

“Yeah, Denise,” Angela said, laughing. “Now that you mention it, you are looking a little pale.”

“I was making a point.” Denise glanced at her own dark-coffee arm with dignity. “With that kind of money, why cruise the beach in a hot car? Buy yourself a big piece of the beach.”

“Not me,” Sandra said in dreamy tones. “I'd buy Bobby a new car to drive to work in. His old truck is about to quit, and when it does, he'll have to use my car until we can afford a new truck.” She straightened and pushed her wispy blonde hair back beneath her nurse's cap. “What about you, Georgie? What would you do if you had big royalty checks rolling in?”

Georgeanne, cheeks flaming, looked up from her documents. She let her brown gaze drift back to the sheets of paper on her desk in a suggestive way. “You already know what I'd do with it. I'd make a big donation to Dr. Baghri's Saturday Clinic. We need more medicines â ”

“Puh-leeze,” Angela said. “You're such a sucker, Georgie. When Dr. Baghri talks about the poor little children, you just fall all to pieces and start volunteering. When do you have time for yourself? When do you date?”

“I don't,” Georgeanne said, without rancor. She never wanted to date again. After her ex-husband had proved she wasn't woman enough to hold a man, Georgeanne figured she was better off avoiding trouble. “I'm too busy with the clinic.”

“Well, the Saturday Clinic is a wonderful idea,” Denise said. “But you can mark my words, it's going to fail. Charity clinics always fail because doctors hate to work for them.”

“Not the way Dr. Baghri has it set up,” Georgeanne said. “If he gets just forty doctors lined up, each doctor would only need to work one Saturday a year in the Clinic.”

Georgeanne glanced at her friends and couldn't resist a grin when she took in their serious faces. “What is it with you all? Are you trying to tell me I'm getting to be a bore on the subject of Dr. Baghri's Saturday Children's Clinic?”

The other three women chuckled and said in unison, “Who? Us?”

“Be reasonable, Georgie,” Denise said. “I'll agree that Dr. Baghri's idea is brilliant. If every doctor around here who wants to do a little charity work would donate one Saturday a year, the Saturday Clinic would be a model for the rest of the United States. The problem is getting the doctors to sign up so the Clinic can get off the ground. Right now, it's only Dr. Baghri and Dr. Gant who are carrying the load. And you.”