Jack Shian and the Mapa Mundi 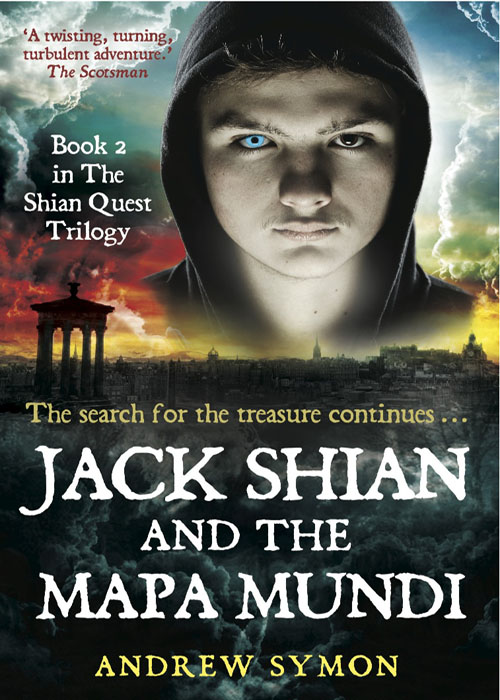 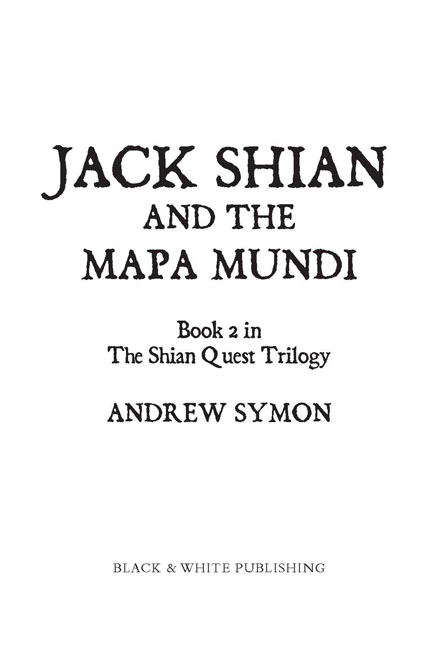 To Maggie, again, and to all those who kept
Otherworld storytelling alive over the years.

Ian Black, for all his help and encouragement when writing this book, and to all the people who said they couldn’t wait for the second book to come out – thank you.

22    The Swordfish of Fortune

The third echo was â¦ silence?

Silence preceded by a hollow emptiness.

Jack had just enough time to be surprised before his eardrums were hammered by a deafening thunderclap. Jumping in alarm, he clasped his hands over his ears.

Screaming, Lizzie tried to do the same â but too late. A trickle of blood emerged from her right ear, and she cooried into her grandfather.

Jack stared in disbelief as the Blue Hag swayed alarmingly on the small hill she had just climbed. Three times he had watched the old woman as she had shuffled up an incline to perform the ancient Shian ritual for clearing the snows at winter's end. Three times on reaching the top she had drawn her long staff upright and thudded it into the ground. Reverberations in the surrounding hills had melted the snow for fifty yards around her. Or at least they had done so twice. But the third time â nothing.

The staff had hit the ground, just like before. But this time, there was no sound â until the thunderclap. The Blue Hag steadied herself and peered round, perplexed. Her gaze passed over Jack, Lizzie and their grandfather, and came to rest on a much higher hill to Jack's left. He followed her eyes. There, standing at the very summit some two hundred yards away, he could just make out three figures. One of them waved something â a sceptre perhaps? â above his head; and then came the sound of distant cheering. The sky above the figures darkened, there was a crack of thunder, and a single lightning strike scorched a solitary tree on the hillside. Howling curses in their direction, the Blue Hag retreated quickly down the hillside.

“Who in Tua's name are they?” exclaimed Jack. The taste of treachery fouled his throat, like the time he'd realised Rowan had sold out the Congress four months earlier.

Lizzie rubbed her right ear and squeaked in alarm as she saw the blood. Cowering behind her grandfather's cloak, she peered fearfully at the distant figures as one of them rose from the ground and did a graceful pirouette in the air. The manoeuvre had lasted fully ten seconds. Grandpa's face relaxed and he lowered his sceptre.

“Kildashie,” he said simply, emphasising the second syllable. “I'd almost forgotten what they were like.”

Jack looked again at the distant figures, but could make little out. Then he saw the one with the sceptre wave it in an arc above his head. There was another loud peal of thunder, and it began to rain. Not just ordinary raindrops: huge smudges of water that drenched within seconds.

“Why'd he do that?” complained Lizzie, trying to pull her coat over her head. “I'm all wet. And my ear hurts.”

As more thunderclaps resounded around the hills, Grandpa Sandy waved at the figures, beckoning them over. After a short consultation, they began to glide from their hilltop, their cloaks flapping in the wind.

“Are they flying?” asked Jack. They reminded him of the two hags who had flown at the back of the Brashats at Dunvik.

“No, they can't fly.” Grandpa kept his sceptre in his hand. “They live on islands far out into the ocean. They use their cloaks to glide.”

The three men landed and made their way with effortless haste up towards them. Jack could see that they were all tall, with long, straggly hair that swept about their faces. The one bearing the sceptre was in front, taking huge strides. Within seconds they had reached Jack and the others.

“Shian of Kildashie,” said Grandpa Sandy slowly and evenly, “I have not seen you for many years. What brings you so far from your islands?”

Their leader stood, his long sceptre planted firmly on the ground. He gazed long and hard at Grandpa Sandy before replying.

“I am Tig, from Hilta. These are Boreus and Donar. We have come to renew old acquaintances, now the Brashat are vanquished.”

“I well remember your dealings with the Brashat.” Grandpa Sandy paused, considering how best to phrase things. “But you should know better than to interrupt the Blue Hag. She will be hard to placate now, and that will prolong our winter.”

“What is that to us?” sneered Boreus. “Your sheltered winters are like spring.”

Jack squinted up at the rain-sodden sky. Dark clouds swept across the heavens, and the wind howled around them.

“But these are not your islands.” Grandpa Sandy pressed his point home. “Here we mark the new spring with this custom. You have disturbed the rhythm of the snow's end.”

Boreus growled under his breath and aimed his sceptre at a tree a little way down the slope. There was a flash, and the tree burst into flames. He moved forward menacingly, but was instantly halted by Tig's raised right forearm. Tig turned and muttered to his colleague, who retreated, scowling.

“I apologise if we have over-stepped the bounds of hospitality,” said Tig, with an ingratiating smile. “We hope to be able to join you in the celebration of your spring.” He looked up at the sky, his brow furrowed briefly, then he waved his sceptre expansively over his head. The skies lightened appreciably. The rain dwindled to little more than a drizzle, and the wind dropped.

Lizzie, impressed, stepped out confidently from behind her grandfather. The ringing in her ears had stopped.

“How did you stop the echo?”

Tig looked sternly at her, and she quickly averted her gaze.

“My granddaughter is eager to learn,” said Grandpa Sandy, putting his arm protectively around Lizzie's shoulder.

“There are times for lessons, and times to watch in wonder,” said Tig evenly. “We will leave you now. But there is much we need to discuss with your Congress. Tell Atholmor that we wish to see him soon.”

Without further word, the three Kildashie turned and strode off. Jack had remained silent since their arrival. As the Kildashie reached the edge of the wood he turned to his grandfather.

“Grandpa, I don't trust them. Stopping the Blue Hag's
infama
, isn't it?”

“I got the same feeling as I got with Konan last year.” Jack thought back to his first encounter with Konan the Brashat in Edinburgh's High Street in Edinburgh, and their subsequent clash at Dunvik just before the battle.

“They
are
rather uncivilised,” his grandfather conceded. “I'd heard rumours that they'd destroyed a lot of trees on their islands; and they don't seem to mind being out in the winter weather, like we do.”

“Then they could attack us in the wintertime, when we're all sheltering.”

“Well, that's possible; but I think we can manage them. There's only a handful of them. They're also sworn enemies of the Brashat, so you've something in common there.”

“How come you've never mentioned them before?” demanded Jack. “And where are these islands?”

“Let's find the Blue Hag first, shall we?” said his grandfather. “We should see if we can't get her on the hills again.”

“She went down that way,” said Lizzie. “D'you think she'll come back?”

“
Cailleach
,” he began, at which she raised her head. “We have seen your power in putting the snows of winter to flight. The Kildashie lack the understanding of your ways, but they have left. Will you continue now?”

The old woman looked at Grandpa Sandy for a moment, then snorted derisively and turned her face away. Grandpa Sandy returned to Jack and Lizzie, and ushered them quickly away.

“We can stay in the bothy tonight. By tomorrow she may have forgotten the Kildashie.”

He led the youngsters along the edge of the trees to a small wooden hut.

“Grandpa, d'you really trust the Kildashie?” asked Jack as Grandpa kindled a fire. “I got a bad feeling about them.”

“I want to know how they stopped the echo,” said Lizzie.

“It must be to do with the wind,” said Grandpa. “They live with it.”

“I got a funny feeling, like I was empty inside.”

“It made my ear bleed,” moaned Lizzie.

“The Kildashie
are
strange; their islands are far out into the western ocean. Living in such a bleak place has made them â¦ shall we say uncivilised? By reputation, all they fear is another Norse invasion.”

“That's right, Lizzie. And you saw how fierce those warriors could be. But they only came because of the Chalice.”

“Do the Kildashie mix with the humans, Grandpa?” queried Jack.

Thwonk by Joan Bauer
There But For The Grace by A. J. Downey, Jeffrey Cook
The Billionaire's Bidding by Barbara Dunlop
Cops 02 - Love on the Run by Kori Roberts
The Taken by Sarah Pinborough
His Pretend Girl by Sofia Grey
Mercury Rises by Robert Kroese
My Life as a Man by Philip Roth
How Do I Love Thee? by Valerie Parv (ed)
Dark Debt by Chloe Neill