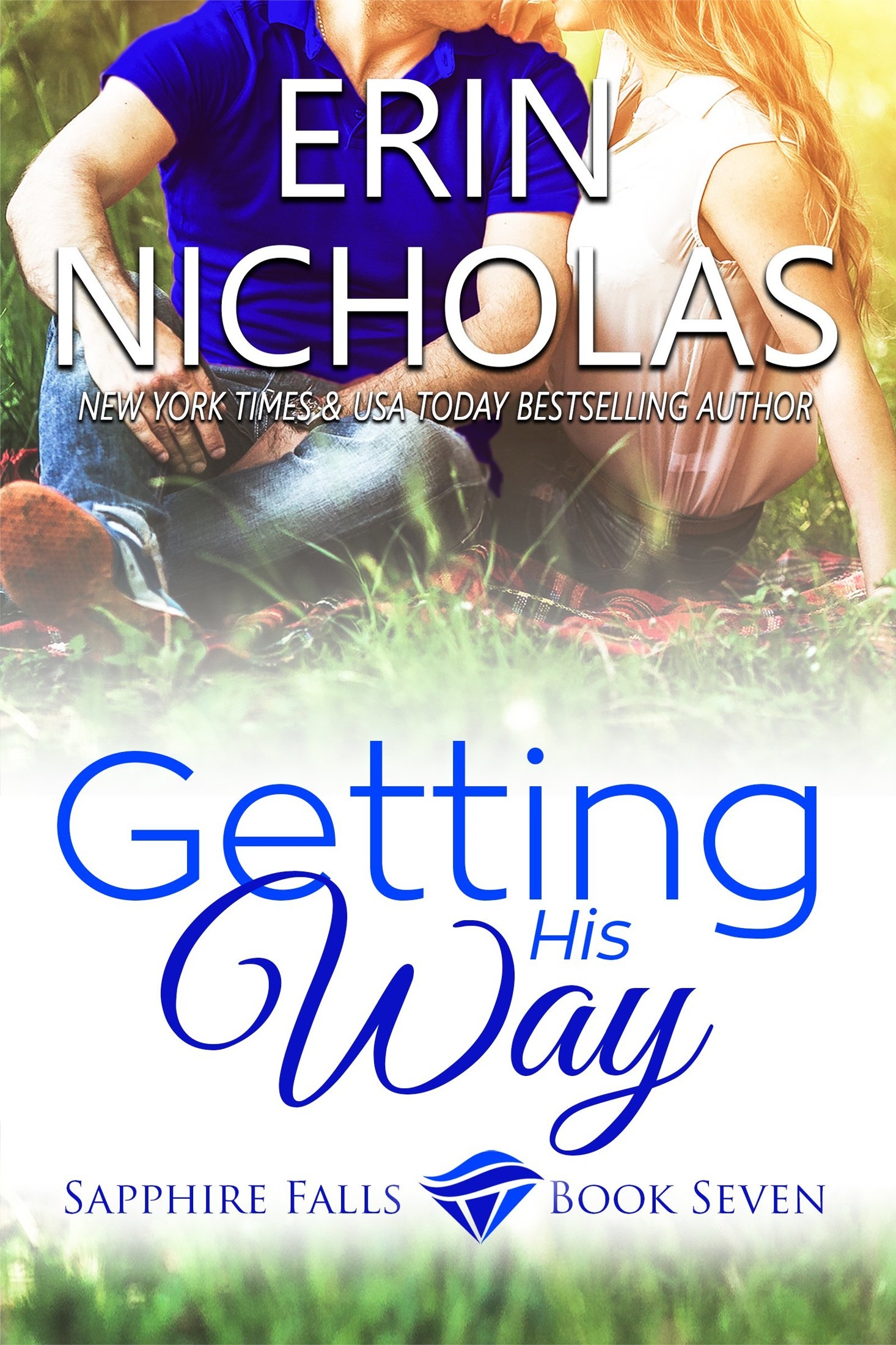 Bryan Murray always planned to return to Sapphire Falls and settle down with Tessa Sheridan. Tessa is sweet, kind, beautiful and planning to live in Sapphire Falls forever. Best of all, she’s loved him since kindergarten. He just didn’t expect it to all happen like this. But a not-so-little tumble down a mountain while biking has turned his life upside down and landed him back in his hometown earlier than he’d planned. At least Tessa is the same girl who’s just been waiting for him to come home.

Tessa has been saving herself for Bryan in every way. While dreaming about an exciting life. Somewhere other than Sapphire Falls. But now Bryan’s messing up all of her plans. Not only has he moved home, but he’s decided to go from the hot, sexy playboy of her fantasies to a sweet, romantic boyfriend type.

What’s a girl gotta do to have an adventure or two? And some hot erotic-romance-novel worthy sex along the way? She’s going to have to make it happen for herself. Which means leaving Sapphire Falls. Which means avoiding falling in love. All while being romanced by the only man who’s ever had her heart.

No part of this book, with the exception of brief quotations for book reviews or critical articles, may be reproduced or transmitted in any form or by an means, electronic or mechanical, including photocopying, recording, or by any information storage and retrieval system without express written permission from the author.

About GETTING HIS WAY

Excerpt from TWISTED UP

To my family who pretty much gave up spending any time with me while this book was being written (I refuse to think that they may have
enjoyed
that!).

To my beta readers and editors who put up with a lot of whining this time (okay, more than usual).

Mari Carr, Samantha Chase, Rhian Cahill, Lizbeth Selvig, Jessie Evans, Shawna Wesley-Roza and Melanie DeJonge, Kate Davies, Marilyn Brant, Suzanne Rock, Meg Benjamin, Kylie Gilmore, and Molly McLain—I’m so honored and humbled by your stories and your sacrifice of time for this! Thank you from the bottom of my heart for coming for this playdate in Sapphire Falls!

Tessa Sheridan was sweet. Super sweet. Possibly the sweetest girl in Sapphire Falls. She was so sweet, she made her
own
teeth ache.

Which meant everyone was going to be very surprised when she stormed into the Come Again and chewed Bryan Murray’s ass.

She pushed open the door to Sapphire Falls’ only bar and stomped inside.

But her entrance was barely noticed. The music was loud and the place was full, especially around the bar, where she expected to find Bryan, the owner.

He was there behind the bar all right, but he was blocked from seeing the door by three gorgeous women and four of his adoring fans. The women didn’t bother Tess. Two were married, and the single one was interested in the town cop—even if she wouldn’t admit it. The fans were men who thought Bryan was the coolest, funniest, most inspirational guy they knew.

And the thing was, Bryan definitely was cool, funny and inspirational.

In fact, Tess was about to yell at the guy who had inspired
her
and made her try something that had changed her life.

But she wasn’t going to tell him that. Because Bryan Murray already had a hard time fitting his big head through doorways. And a lot of that was her fault.

Bryan’s face actually lit up when he saw her, and for just a second, she felt her heart flip and her frown ease.

No. She couldn’t do that. She couldn’t go all mushy over that smile—the way she had for about twenty two years. She’d fallen for him when she was five. She hadn’t gotten over him until she was about twenty seven. Two and a half years ago.

“Can we talk?” she asked, keeping her voice firm and low.

Of course, the people right around them—including Bryan’s adoring fans and the women with them—heard her.

And they all focused on her with rapt interest.

Bryan seemed to notice she wasn’t overjoyed to see him and glanced around. “Actually, uh, I have a lot going on right now. Maybe later?”

She looked around too. The bar was busy, but everyone seemed happy. “Derek’s here,” she said of Bryan’s main bartender. “I’m sure he can handle whatever comes up. It will only take a minute.”

Maybe less. All she needed to tell him was to stay out of her love life.

Could that wait until later? Maybe. Would it be better without an audience? Possibly. But she had come straight over after she’d heard he had warned off yet another guy from asking her out. She was ticked, and she needed to confront Bryan when she was ticked. And she needed to do it fast, before he wore her down and made her laugh and reminded her why she’d had a crush on him for as long as she’d known him.

This was the fourth guy Bryan had told hands off. Which was not just incredibly intrusive in her life, but also completely rude. Because
he
wasn’t asking her out either. He’d been home for a year and seven months and hadn’t so much as bought her a beer.

Okay, he’d given her a couple of free ones. As the owner of the Come Again, he could do that. He gave away free beer to people on a nightly basis. It wasn’t like it was some big gesture.

Five years ago, if she’d heard that Bryan was keeping the other guys in town from dating her, it would had given her hope that he wanted something from her besides friendship. If he’d done it ten years ago, she would have assumed they were going to get married and live happily ever after. Of course, ten years ago—and fifteen years ago and twenty-five years ago on the first day of kindergarten—she figured they were destined to be together forever.

She had grown up. She had matured. Finally. She was done waiting for Bryan Murray. She was no longer pathetically in love with him.

She had been young and naïve and starry-eyed over the guy from age five to twenty-seven. But no more.

And considering Bryan knew she had been pathetically in love with him all that time, she needed to fill him in on the fact she was done with it. Apparently soon.

He was leaning against the counter on the backside of the bar and shifted to rest his elbows on top, putting his face directly in front of her. She moved back, not able to handle having his face only inches from hers.

“Tess, let’s do this after closing,” he said, his voice almost soothing.

Soothing. Yeah. Then why did she feel like she’d just touched a live wire?

After closing, with no one else around, was
not
a good idea. If they were alone, she would revert to thirteen-year-old Tess—the girl with braces and oily hair and a big butt who would swoon every time he made a joke in math class. He could do no wrong in her eyes.

Back
then
. Definitely back then. Now she was smarter and more mature and knew that smiles and compliments didn’t mean true love. Sixteenth-birthday kisses didn’t either. Nor did marriage proposals. Evidently. Of course, he’d been nine when he’d informed her that he was going to marry her.

Fortunately, she’d moved beyond the romantic ideas she’d had when she was nine. And sixteen. And twenty-five.

They’d been twenty-five when he’d told her he knew he’d never meet another girl like her. He’d also been drunker than she’d ever seen him. But her stupid heart hadn’t cared.

Tess lost her patience—something she never did. She slapped her hand down on top of the bar, making the beer in Ty’s and Tucker’s mugs jump. “You’re messing with me, Bryan, and it’s got to stop.”

He’d been messing with her as long as she’d known him. It wasn’t his fault. It was hers. But she was probably going to take it out on him.

He didn’t look shocked. Or contrite. He cocked an eyebrow, looking almost impressed. Or something. “I’m messing with you?” he asked. He gave her a slow smile. “I really think I’d remember that.”

That
. That right there was the reason she couldn’t be alone with him. Because one flirtatious sentence in his low voice, one mischievous twinkle in those deep-green eyes, and that slow country-boy grin, and she was on the verge of sighing happily.

And he knew it.

“Very funny,” Tess told him, narrowing her eyes. “You need to stop. You’re starting to piss me off.”

There was a beat of silence, and then Bryan laughed out loud. And he wasn’t the only one. Ty, Tucker, Kyle Ames, the town doctor, and Derek Wright, the main bartender, all laughed too.

Tess crossed her arms and waited for them to sober up.

Finally, Bryan looked at her, still with a big grin. “That’s cute, Tess.”

Her eyes widened. Her being pissed off was
cute
?

So she didn’t get pissed off much. She was a very forgiving, kind,
sweet
person. Overall. But she
could
get pissed. Probably.

Okay, pissed was pushing it. She was irritated—and confused—by Bryan meddling with the guys who wanted to ask her out. But, yeah, probably not
pissed
.

Still, Bryan Murray needed to back off. He wasn’t the guy she wanted. Not anymore. She wasn’t even sure she wanted a guy at all. She’d found herself in the past just-over-two years and she liked herself, a lot. She was content. For the first time in her life.

And now Bryan was suddenly inserting himself into her bliss?

It was true that she owed him. Her life had changed two and a half years ago when she’d read one of Bryan’s blog posts for the first time. But he didn’t know that. And she intended to keep it that way. Mostly because of the years of pathetic-over-him that he
did
know about.

But, yeah, she couldn’t be
totally
pissed at him. Bryan wasn’t the reason for her bliss, but he was the reason she’d found it herself.

Bryan had been the head coach to Ty Bennett—a world champion and Olympic medalist in the triathlon. He’d also coached several other high-level running and biking athletes, and he’d written a regular blog about training including nutrition and stretching and warm ups and such. But most important to Tess had been the inspirational posts. Bryan was a die-hard optimist, a guy who could never stay down. He was driven and hardworking and joyful about it all. And his outlook and attitude had all been severely challenged and proven, without a doubt, when he’d been involved in a mountain-biking accident twenty-six months ago.

Arson Takes a Dare: The Third Marisa Adair Mystery Adventure (Marisa Adair Mysteries Book 3) by Jada Ryker
His Desire by Mary Eason
Against the Rules by Linda Howard
The Ask and the Answer by Patrick Ness
The Robber Bride by Margaret Atwood
Naming Jack the Ripper: The Biggest Forensic Breakthrough Since 1888 by Edwards, Russell
A Game Of Brides (Montana Born Brides) by Megan Crane
Intermix Nation by M.P. Attardo
Gone Country by James, Lorelei
The Orchid Tree by Siobhan Daiko