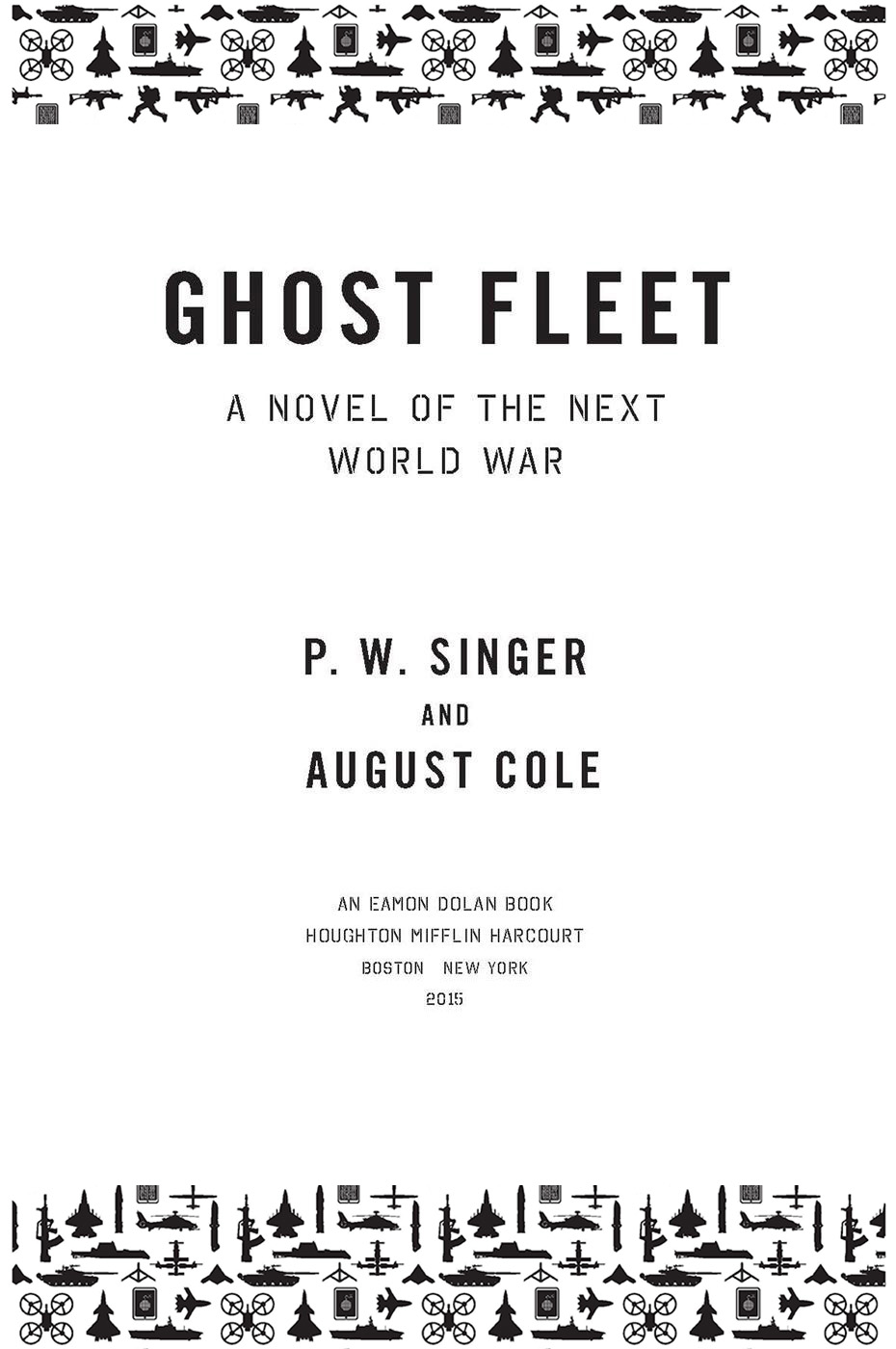 Ghost fleet : a novel of the next world war / P.W. Singer and August Cole.

The following was inspired by real-world trends and technologies.

But, ultimately, it is a work of fiction, not prediction.

243 Miles Above the Earth's Surface

What did Vitaly mean by that? As the sole American astronaut on the International Space Station, U.S. Air Force Colonel Rick Farmer was used to being the target of the Russian crew's practical jokes. The most recent had involved their sewing him shut inside his sleeping bag and then wide-casting his reaction for the whole net to see.

Now, that had been funny. But this was outside. Different rules when you're floating outside, only a thin tether keeping you hooked to the station.

The odd thing was that Cosmonaut Vitaly Simakov's voice had been unaccompanied by his usual booming laugh.

Farmer rechecked his tether, more for mental reassurance than any need. It had been twenty-four minutes since he'd been able to raise Vitaly or anyone else in the station on his suit's radio. That message was the last Farmer had heard from the mission commander after he'd made his way out of the station to repair the fluky number four solar panel. Even Houston was offline. He chalked up the silence to another one of those technical problems that made daily life in space so difficult, rather than the romance NASA still spun for the media.

With a PhD from Caltech in systems engineering and over four thousand flight hours in everything from T-38 trainers to F-22 stealth fighter jets, Farmer knew that big, complicated things sometimes just did not work as they were supposed to. He remembered the time his twin boys had played around with his flight gear on the eve of his first deployment to Afghanistan, half a lifetime ago. “Daddy needs a helmet because sometimes his job can be really hard.” He hadn't told them that in his line of work, the mundane stuff was the hardest.

Farmer approached the hatch to reenter the space station.

He said it again, emphasizing each word this time to allow the voice-recognition software to lock on.

It was as if the system couldn't hear him.

He reached for the manual override and lifted the cover that protected the emergency-open button. Well, he thought as he pressed it, this was fast on its way to becoming one.

He pressed again, harder, the force of his fingers against the bright red button pushing him backward in the weightless environment of space. If he hadn't been tethered to the station, that push would have sent him spinning off at a rate of ten feet per second on a trajectory toward Jupiter.

Nothing. What the hell?

The outside of his visor was gold-coated, the world's costliest sunglasses. Inside was an array of computer displays projecting everything from his location to the suit's internal temperature.

Farmer couldn't help noticing the red light flashing in the corner, as if he needed the computer to inform him that his heart rate was spiking. He paused to center himself with a deep breath, looking down at the sweeping span of blue beneath. He tried to ignore the black void ringing Earth, which seemed to widen menacingly. After half a minute of steady breathing from his core, just like the NASA yoga instructor back in Houston had taught him, he stared hard at the door, willing it to open.

He tried the button again, and then again. Nothing.

He reached down for his HEXPANDO.
1
The expanding-head hexagonal tool had been designed by NASA's engineers to remove or install socket-head cap screws in hard-to-reach places. It was a glorified wrench.

The instructions explicitly said that the HEXPANDO was “not intended for application of torque.”

Farmer banged the HEXPANDO on the hatch. He couldn't hear any sound in the vacuum of space, but the pounding might resonate within the station's artificial atmosphere on the other side of the hatch.

Then a hiss of static and Farmer's radio came back to life.

“Vitaly, you hear me? I was getting worried there. The comms are on the fritz again, and now the damn voice-command systems on the hatch aren't working,” said Farmer. “Tell Gennady I am going to send him back to trade school in Siberia. His repair job yesterday actually broke everything. I need you to open manually from the inside.”

“I cannot. It is no longer my decision,” said Vitaly, his voice somber.

“Say again?” said Farmer. The red heart light pulsed just outside his field of vision, as if Mars were suddenly blinking over his shoulder.

“I am no longer authorized to open hatch,” said Vitaly.

“Authorized? What does that mean? Get Houston, we are going to sort this out,” said Farmer.

“Goodbye, my friend. I am truly sorry. It is orders,” said Vitaly.

“I've got an order for you. Open the fucking hatch!” said Farmer.

The soft pulse of static that followed was the last sound Farmer would hear.

After five minutes of pounding on the hatch, Farmer turned from the station to stare down at the Earth beneath his feet. He could make out the Asian landmass wreathed in a white shroud, the cloud of smog stretching from Beijing
2
southward toward Shanghai.

How much time did he have? The red light's urgent flashing indicated spiking respiration. He tried to calm himself by running calculations in his head of the Earth's rate of turn, the station's velocity, and his remaining oxygen. Would it be enough time for the Eastern Seaboard to come into view? His wife and grown boys were vacationing on Cape Cod, and he wanted to look down at them one last time.

You can fight a war for a long time or you can make your nation strong.
You cannot do both.

â
SUN-TZU
,
THE ART OF WAR

Sometimes history is made in the dark.

As he scanned the blackness, Zhu Jin thought about what his wife would be doing right now. He couldn't see her, but he knew that ten kilometers above, Liu Fang would be hunched over her keyboard, ritually tightening her ponytail to burn off the tension. He could imagine her rough sneeze, knowing how the cigarette smoke from the other geologists irritated her.

The screens inside the Jiaolong-3
1
Flood Dragon deep-water submersible were the only portholes that modern science could offer the mission's chief geologist. His title was truly meaningful in this case. Lo Wei, the Directorate officer sent to monitor them, had command, but ultimately, responsibility for the success or failure of the mission fell on Zhu.

So it was appropriate at this moment, he thought, that he alone was in control, deep below the COMRA
2
(China Ocean Mineral Resources Research and Development Association) deep-sea exploration vessel
Xiang Yang Hong 18
. This particular pocket of the Mariana Trench belonged to him alone.

Zhu guided the course underwater with a series of gentle tilts of the softly glowing control-sleeve gloves he wore. He was moving too close to the sheer trench walls to consider using the autopilot. He exhaled to clear his mind. There was so much pressure, poised to crush his vessel and everyone's dreams at any moment.

He adjusted the headset with a nudge of his shoulder. There, just as he thought. Blinking, he leaned forward, as if proximity to the lightly glowing video screen and the crushing darkness beyond the sub's hull could make the moment any more real.

This dive was the last; it had to be.

The moment had come. It was the culmination of literally decades of research and investment. No other nation had even attempted to plumb the depths of the sea like Zhu and his comrades, which was why 96 percent of the ocean floor still remained unexplored and unexploited. Indeed, the training alone for the deep-sea dive had taken a full four years once the team at Tianjin University developed the submersible.
3
Compared to that, the five days of searching on this mission was nothing.

This descent, with Zhu at the controls, was the mission's last shot. At some point soon, the team knew, the Americans would be paying them a “friendly” visit, or maybe they would have the Australians do it for them. The Chinese were too close to the big U.S. base in Guam; it was a wonder nobody had come to look into what they were doing yet. Either way, the clock was ticking, both for the COMRA vessel and, he worried, its crew.

He thought of Lieutenant Commander Lo Wei standing over Zhu's wife's shoulder, getting impatient, lighting cigarette after cigarette as she sneezed her way through the smoke. Zhu could almost feel the crew scrutinizing her face with the same intensity they viewed their monitors. They would think, but not say aloud,
How could he fail us, when he knew the consequences for us all?

Zhu had not failed.

The discovery itself was anticlimactic. A screen near Zhu's right hand flashed a brief message in blue and then flipped into a map mode. There had been indicators of a gas field here, but as the data streamed in, he now knew why his gut had guided him to this spot. He nudged the submersible on, sorting the deployments of the sub's disposable autonomous underwater vehicles, which would allow the team to map the full extent of the discovery. Each vessel was, in effect, a mini-torpedo whose sonic explosion afforded the submersible's imaging-by-sound sensors a deeper understanding of the riches beneath the sea floor. The sound waves allowed the computer to “see” the entirety of the field buried kilometers below the crust. The mini-torpedo technology came from the latest submarine-hunting systems of the U.S. Navy; the resource-mapping software had originated with the dissertation research of a PhD student at Boston University. They would never know their roles in making history.

After thirty-five minutes of mapping, it was done.

Enough time in the dark, Zhu thought. The transition between the deep and the surface, he once confided to Liu, was the worst. To die there would be his hell, trapped in the void between the light of day and the marvels of the abyss. But this time it was his joy; the void filled with the sense of anticipation at sharing the news.

When he opened the submarine's hatch, he saw the entire crew peering over the port rail, staring down at him. Even the cook, with his scarred forearms and missing pointer finger on his left hand, had come to gape at the Jiaolong-3 bobbing on the surface.

He squinted against the bright Pacific sun, careful to keep his face expressionless. He searched for Liu among the crew gathered at the ship's railings. At the crowd's edge, Lieutenant Commander Lo stood staring at him with a sour face, an unspoken question in his eyes. Zhu locked eyes with his wife, and when he couldn't contain his discovery anymore, he smiled. She shouted uncharacteristically, leaping with both hands in the air.

Jack A Grim Reaper Romance by Calista Taylor
There's a Spaceship in My Tree! by Robert West
Bjorn: Teutonic Knights MC by Carmen Faye
Life Stinks! by Peter Bently
Sicilian Dreams by J. P. Kennedy
Got Thrills? A Boxed Set (A McCray Collection) by Carolyn McCray
Bittersweet Revenge by J. L. Beck
In the Shadows of Paris (The Predator Of Batignolles) by Claude Izner
Eagle’s Song by Rosanne Bittner
Hostage to Pleasure by Nalini Singh