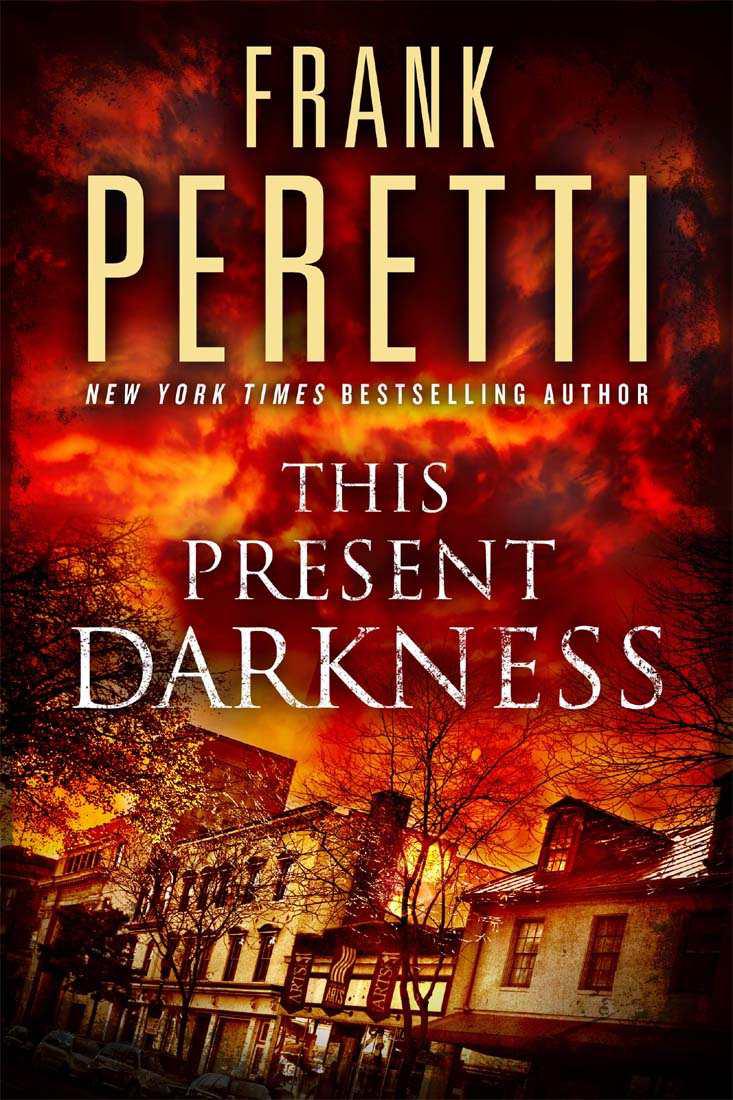 The small town of Ashton is the unexpected setting for an epic clash between good and evil as a Christian preacher and a news reporter unearth a plot to take over their small community, and eventually the world. Unseen supernatural forces are at play, as armies of angels and demons wage battle, with groups of Christians and New Agers influencing what they cannot see by the power of prayer.

With more than 12 million novels in print,
Frank Peretti
is nothing short of a publishing phenomenon and has been called “America’s hottest Christian novelist.”
The Oath
(Word Publishing 1995), sold more than half a million copies within the first six months of release.
The Visitation
(Word Publishing 1999), was #1 on the CBA Fiction Bestseller list for four months. Peretti is a natural storyteller who, as a youngster in Seattle, regularly gathered the neighborhood children for animated storytelling sessions. After graduating from high school, he began playing banjo with a local bluegrass group. He and his wife were married in 1972, and Peretti soon moved from touring with a pop band to launching a modest Christian music ministry. Peretti later spent time studying English, screen writing and film at UCLA and then assisted his father in pastoring a small Assembly of God church. In 1983, he gave up his pastoring position and began taking construction jobs to make ends meet. While working at a local ski factory, he began writing
This Present Darkness
, the book that would catapult him into the public eye. After numerous rejections from publishers and a slow start in sales, word-of-mouth enthusiasm finally lifted
This Present Darkness
onto a tidal wave of interest in spiritual warfare. The book appeared on
Bookstore Journal
’s bestseller list every month for more than eight years. Peretti’s two spiritual warfare novels,
This Present Darkness
(1998) and
Piercing the Darkness
(1989), captivated readers, together selling more than 3.5 million copies.
The Oath
was awarded the 1996 Gold Medallion Award for best fiction. Frank Peretti and his wife, Barbara Jean, live in the Western U.S. In spite of sudden fame and notoriety, Frank still lives a simple, well-rounded life that includes carpentry, banjo making, sculpturing, bicycling and hiking. He is also an avid pilot. 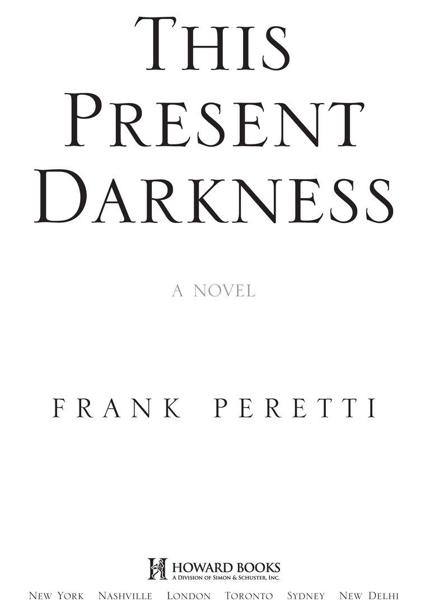 All rights reserved, including the right to reproduce this book or portions thereof in any form whatsoever. For information address Howard Books Subsidiary Rights Department, 1230 Avenue of the Americas, New York, NY 10020.

HOWARD and colophon are trademarks of Simon & Schuster, Inc.

Thank you for purchasing this Howard Books eBook.

PEOPLE OFTEN ASK
me, Which of your books is your favorite? Of course, as any parent would speak of his children, I reply that I prize all of my books, and it’s hard to pick a favorite. Each book is unique, reflecting a particular time in my life, a stage of growth, something I was learning, pondering, and experiencing. You can almost trace Frank Peretti’s spiritual journey by reading his books.

But having said all that, I can tell you that
This Present Darkness
holds a special place in my heart because it was my very first novel, written during a time of dark discouragement and bitter struggle. I was in my midthirties, I’d pursued many dreams with no enduring success, and now I was a frustrated, burned-out former minister working in a ski factory with only one dream left: to be a writer. When Crossway Books called me to say they would publish my book, that was probably
the
pivotal moment of my life.

What inspired this book? Nothing in particular and a lot of things in general. Twenty-five years ago, the drug tripping of the sixties was “maturing” into the neopaganism of the late seventies, and demons—and their doctrines—were gaining a weird, glassy-eyed respect from the popular culture;
Star Wars
was a smash hit movie that dazzled us with sights, sounds, and spectacles from other worlds; Superman and Indiana Jones were reviving the mystique and appeal of the “superhero.” Somewhere in all this mix of spirit and spectacle, I envisioned a story that would convey the dangers and workings of warfare in the spiritual realm. I envisioned a movie-of-the-mind, a fiery-winged flight through dimensions never dreamed of, blade-to-blade encounters with the ugliness
of spiritual evil, and the triumph, the blazing white light of God’s holy angels, slingshot to victory by the prayers of struggling saints. For five years I dreamed, fantasized, and “played pretend” on paper, on and off, frequently abandoning, always returning to the project, the vision, the one thing I just had to finish before I died, published or not.

Seventeen years ago—three years after it was finished—
TPD
was in print. After a slow start, it leaped suddenly from store shelf obscurity to front-counter celebrity, and stayed on the bestseller lists for nearly ten years, breaking publishing barriers and records alike. Of all the books I have written,
This Present Darkness
has been the most popular. Of all the topics I’ve addressed in my books, spiritual warfare seems to be the one topic with which I will always be identified, probably to my grave.

Today, fifteen years after the publishing of the sequel,
Piercing the Darkness,
I don’t talk much about spiritual warfare. I’ve moved on to learn and write about other topics as God leads me. But that’s the nice thing about books: Even though the author has moved on to other things, the books remain.
This Present Darkness
is still speaking the same message to new generations, in many countries, in many languages. God is still using my feeble effort from years ago to open eyes, change hearts, and save souls. Do I find that satisfying, fulfilling, and awe-inspiring? Ohhhhh yes, and from the days in the factory until now, I have never been able to comprehend the vastness of God’s power and purpose. I can only stand in wonder and give thanks for what He has done.

LATE ON A
full-mooned Sunday night, the two figures in work clothes appeared on Highway 27, just outside the small college town of Ashton. They were tall, at least seven feet, strongly built, perfectly proportioned. One was dark-haired and sharp-featured, the other blond and powerful. From a half mile away they looked toward the town, regarding the cacophonic sounds of gaiety from the storefronts, streets, and alleys within it. They started walking.