Read Ghost in the Storm (The Ghosts) Online

Ghost in the Storm (The Ghosts) 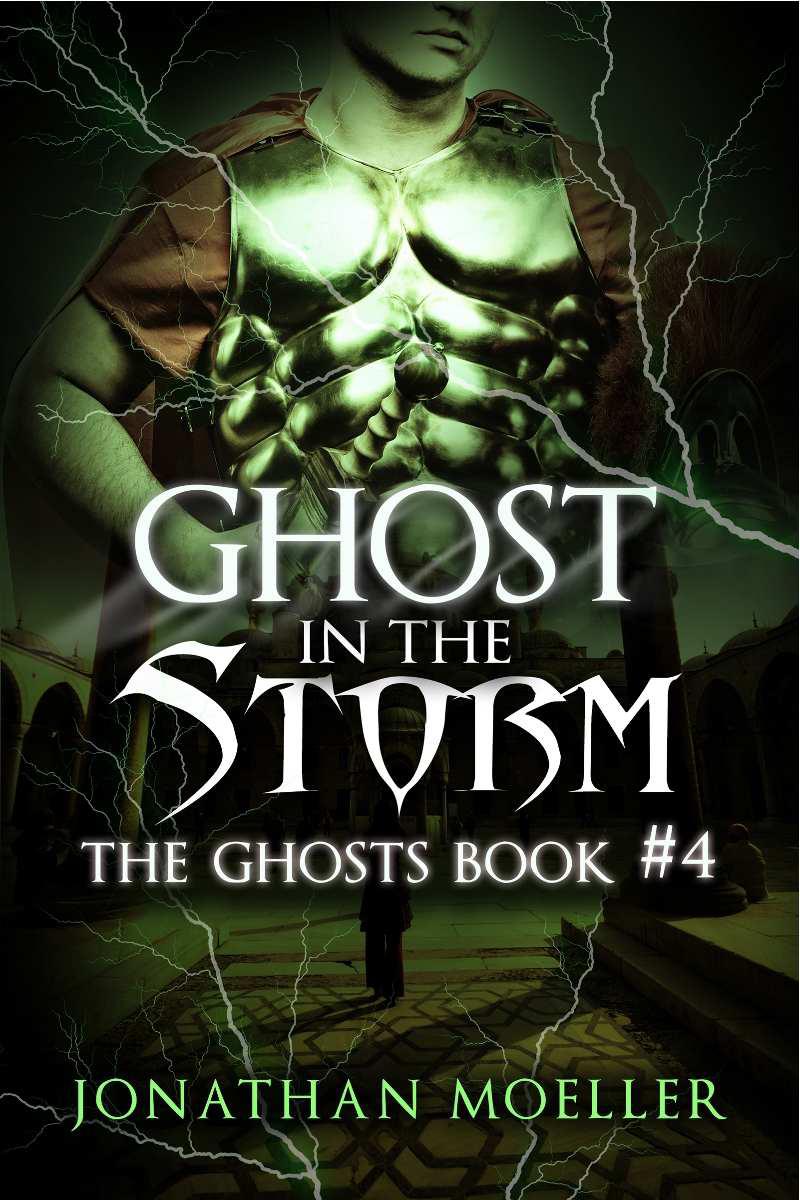 GHOST IN THE STORM

CAINA AMALAS
is a Ghost nightfighter, one of the Emperor's elite spies and assassins. And though she remains anonymous, already legends grow around her. Whispers speak of the Ghost nightfighter who stopped the fire of the gods from consuming Rasadda, who defeated sorcerers of terrible power, who liberated slaves and threw down cruel lords.

Yet now the storm is coming to claim her...

ARK
spent five long years hunting for his missing wife and son. Now, at long last, he has found them again. When the storm comes, he will do anything to save them.

No matter what the cost to himself...

KYLON
is a stormdancer of New Kyre, master of the sword, wielder of the sorcery of air and water. The youngest man ever to claim the title of stormdancer, he will fight for the honor of his city and his sister.

Even if he is doomed to fail...

REZIR SHAHAN
is an Emir of Istarinmul, a man of cruelty and power, a tyrant who rules over his slaves with a rod of iron. For too long the commoners of the Empire have defied their rightful masters.

When the storm comes, he will teach them to wear a slave's collar...

ANDROMACHE
is one of the nine archons of New Kyre, her lineage ancient, her authority vast. For the honor of her city, she will bring the storm of war to the Empire.

And when she does, her true master will reward her with dark power beyond imagining.

Other books by the author

Child of the Ghosts

Ghost in the Flames

Ghost in the Blood

Ghost in the Storm

Ghost in the Stone

Ghost in the Forge

The Dragon's Shadow (World of the Demonsouled novella)

The Wandering Knight (World of the Demonsouled short story)

The Tournament Knight (World of the Demonsouled short story)

The Tower of Endless Worlds Series

The Tower of Endless Worlds

A Knight of the Sacred Blade

A Wizard of the White Council

The Destroyer of Worlds

Driven and Other Stories

Angel Sword and Other Stories

This novel is a work of fiction. Names, characters, places and incidents are either the product of the author's imagination, or, if real, used fictitiously. No part of this book may be reproduced or transmitted in any form or by any electronic or mechanical means, including photocopying, recording, or by any information storage and retrieval system, without the express written permission of the author or publisher, except where permitted by law.

Caina saw the dead sorceress standing in the center of the room.

The woman was beautiful, radiant. She looked like a maiden of eighteen years, with long black hair and red lips. But that was only an illusion. She was the Moroaica, a sorceress of legend and terror, and her black eyes were ancient and cold with dark knowledge.

And Caina had seen her die.

The Moroaica stirred, those ancient eyes falling upon Caina.

The woman who had called herself Jadriga smiled. "Did you?"

"I saw you die," said Caina, reaching for the dagger at her belt, "but if by some trick you have returned, then I will slay you again!"

"Child," she said. "You should prepare yourself for what comes."

The world dissolved into blackness.

She sat up, yanking a dagger from beneath her pillow, and looked around. Her room at Zorgi's Inn looked just as it had last night - the same soft bed, the same windows with a fine view of the ships filling Marsis's harbor. Caina looked back and forth, expecting to see Jadriga in the corner.

But Caina was alone.

A dream. It had been nothing more than a nightmare. Jadriga had been dead for two weeks, killed by the dark forces she sought to conjure below Black Angel Tower.

Just a dream. Yet the uneasy feeling lingered. Dreams were the scars of the mind, Halfdan always said. And perhaps Jadriga had left more of a scar than Caina had thought.

Caina pushed aside the blankets, rose, and began to stretch, her limbs moving through the exercises Akragas had taught her at the Vineyard years ago. She looped a rope to the beams of the ceiling and pulled herself up by the strength of her arms, over and over again. She stood balanced on her right leg, left foot raised to her jaw.

Then the unarmed forms. High punch, middle block, leg sweep, backward throw, all the moves she had practiced over and over again until they were imprinted upon her very muscles. When she finished, sweat soaked her shift, and her arms trembled just a bit, and she felt much better.

Work was the only cure for dark feelings.

Caina bathed, washing the sweat from her skin and black hair, and put on a green dress with black trim on the sleeves and hem. A curved dagger went in a sheath at her belt. Most of the women of Marsis wore a dagger, but Caina also hid a pair of daggers in her boots and strapped a set of throwing knives to her forearms.

She would have felt naked without the weapons.

After she dressed, Caina went to the common room for breakfast.

Zorgi's Inn overlooked the Plaza of the Tower, the richest district of Marsis, and wealthy merchants and minor nobles preferred to stay at his inn when visiting the city. The common room had hearths crackling at either end, and guests broke their fast at long tables, while maids in livery brought out trays of food from the kitchen.

A stout Szaldic man in his middle forties hurried over to Caina, smiling beneath an enormous bushy mustache. He smiled a lot, but when Caina had first met him, the smile never reached his eyes. But since his son had returned with the other slaves from the dungeons below Black Angel Tower, a new vigor had appeared in his step.

And he would never know that Caina was the one responsible.

"Anna Callenius!" boomed Zorgi, bowing over Caina's hand and planting a kiss upon it. "It is good you have awakened. Our humble inn is all the brighter for your beauty."

"How could I stay away?" said Caina. "All of Marsis knows the splendor of your table, Master Zorgi."

"Ah," said Zorgi, taking her arm and steering her across the room, "your compliments bring to a tear to the eye of this weary old man."

"I have seen many tears in your eyes," said Caina in a quiet voice, "since your son returned."

Zorgi's face softened further. "Aye. Did I tell you? The Balarigar himself brought my son here, after he slew the dread Moroaica and freed the slaves."

Caina kept her expression still. The Balarigar. The Demonslayer, in the Szaldic tongue. The freed slaves had given that name to the masked and hooded figure that  defeated Jadriga, little dreaming that the Balarigar was in fact a woman.

That Caina was a nightfighter of the Ghosts.

"But enough of such talk!" said Zorgi. "Your father awaits you. Perhaps he has found you a rich husband, eh?"

He led Caina to a table in the corner. Two men, a woman, and a boy sat there. One of the men was in his fifties, and wore the cap and furred robe of a prosperous merchant, his craggy face shaded with a gray beard. The second man was in his forties, with balding, close-crapped hair and the hard look of a former Legionary. His left hand rested atop the woman's right. She was no older than twenty-seven or twenty-eight, and looked a great deal like Caina, though taller.

The boy had the Legionary's gray eyes and the woman's black hair.

"Ah, daughter," said Halfdan, adjusting the sleeve of his robe. "You've joined us. Thank you, Zorgi."

"My pleasure, Master Basil," said Zorgi, using Halfdan's false name. Just as he did not know that Caina was a Ghost nightfighter, he did not know "Basil Callenius" was a circlemaster of the Ghosts, the Emperor's spies and assassins. "I shall have tea brought for her at once."

He bustled off, and Caina sat.

"Still drinking tea, daughter?" said Halfdan, his gravelly voice amused. He spoke with a Nighmarian accent, though like Caina, he knew how to change his voice and accent as needed. "You'll never pass as a merchant's spoiled daughter. Spoiled daughters prefer to have mixed wine with breakfast."

The former Legionary snorted. "You? Doubtful." Unlike Zorgi, Ark had a hard, unsmiling face, with cold  eyes the color of steel.

Yet some of the hardness had vanished from his face since Caina had brought his wife and son out of the darkness below Black Angel Tower.

"You've never been hung over," said Ark, "since you would never let yourself lose control enough to get drunk."

"Or I simply do not care for the taste of wine," said Caina.

"She may drink," said Tanya, Ark's wife, "whatever she wishes to drink. And I will bring it to her myself."

"I like tea," announced the boy, with all the solemnity a six-year-old could manage.

Ark snorted. "Wait until you're twelve, Nicolai, and you can have ale."

Caina grinned, and this time it was not feigned. She would never have a husband and children. Not after what Maglarion and her mother had done to her. Yet it pleased her to see Ark and Tanya happy together. She had seen the despair in Ark's eyes as he spoke of his lost wife and son, the horror on Tanya's face as she described Jadriga's plans for Nicolai.

It pleased Caina very much to see them happy.

"Will we depart soon, Father?" said Caina. "I had thought we would have left by now. You have pressing business in the Imperial capital."

"Soon," said Halfdan, taking a bite of cheese and swallowing. "After we attend to a small business matter here."

"I want to see the ships," said Nicolai.

They all looked at him.

"Ships?" said Caina. "There are hundreds of ships in the harbor."

"But these are special ships," said Nicolai. "Master Basil said so, when he was talking to Father. I want to see them."

"An embassy," said Halfdan. "The Padishah of Istarinmul is sending a new ambassador to our Emperor. A noble named Rezir Shahan, an emir from the Vale of Fallen Stars. He and his entourage are traveling to Malarae to present their gifts to the Emperor, but first he will stop to pay his respects to the Lord Governor of Marsis. He is due to arrive this morning."

"I do not," said Tanya, voice quiet, "care for the Istarish." Little wonder. Most of the slavers in the Moroaica's and Lord Naelon Icaraeus's service had been Istarish.