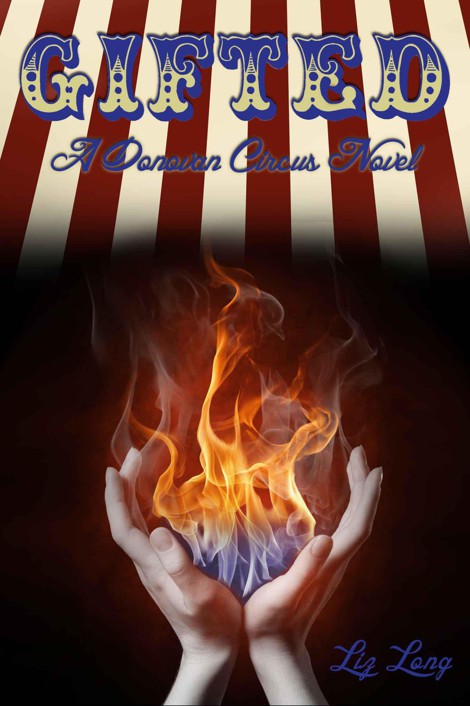 Names, characters and incidents depicted
in this novel are products of the author’s imagination and are used
fictitiously.

Any resemblance to actual events, locales,
organizations or persons (living or dead) is entirely coincidental and beyond
the intent of author or publisher.

No part of this book may be reproduced
without written permission from the author or publisher.

To Morgan—my cheerleader, my
editor, but most importantly, my friend. This book would not be in existence
without your help. I very literally don’t know what I’d do without you. To ten
years of friendship and fifty more. Thanks for always loving every story I’ve
ever been brave enough to show you.

“Donovan Circus,” a deep voice
answered on the third ring.

“Hi. Um…is Sheffield Donovan
there?” Knots in my stomach, my grip tightened on the phone. For a brief
moment, I worried I would set the receiver on fire by accident.

“Sheffield, it’s Lucy Sullivan.
When can we arrange a meeting?”

“What does your mother think?”

I stared at the wall, willing my
voice not to crack. Heat flushed my skin pink in the effort. “She, uh…she died
a couple weeks ago.”

There was a brief pause and
then: “How’s tomorrow afternoon?”

“I’ll be there at two if that’s
okay with you.”

I hung up and stared at the
phone. Would it really be that simple to walk back in? Could I even do it
without my father there to guide me? Wait—
did I just join the circus?

That night, I packed my bags. I
didn’t sleep much between the nerves and my brain’s unyielding thought process.
I clearly had no idea what lay ahead of me. I was entirely too old to be this
nervous, but it was the first time I’d ever really had a chance to do something
for myself without my parents there to supervise me. Now that they were gone, I
had no other choice but to do it on my own.

The Donovan Circus was known for
unusual acts, feats that seemed unlikely for humans. This was truer than we
could admit to outsiders: a large group of gifted, those with remarkable
powers, showed off their talents night by night, all the while bringing in
curious humans who had no idea about us. I wanted to use my gift and be with
other people like me. I wanted to be normal amongst the freaks.

The next morning, I headed to
where Donovan Circus had settled a day ago. When I saw the tents in the
distance, my palms began to sweat; I tried to keep fire from escaping them. As
I got closer, I couldn’t even talk myself into a motivational speech. I stared
open mouthed at my surroundings, like a guppy in the fish bag at one of the
game booths. Donovan Circus was more than a handful of tents; it also had game
booths, a few small rides like the pastel carousel, and a large, bright Ferris
wheel. The lot wasn’t completely set up yet, but already I could see several
people prep the grounds.

Only circus vehicles like
loading trucks and clown cars were allowed on the actual grounds. I found the
employees’ makeshift parking lot maybe a quarter of a mile from the tents and
parked. On a mostly gravel dirt lot, it sat close to a small wooded area. I
debated on taking my bags with me, but there was always a chance Sheffield
wouldn’t have me. The only thing worse than hearing him deny my participation
would be carrying all that shit back to the car, clumsy and defeated.

I tried to hold my head high and
prayed my shoulders didn’t do that nervous twitch they sometimes did. The
grounds were maze-like and I passed the same game booth at least twice. The
tents were red, white, or black, and all made from the same heavy canvas
material to prevent weather damage. After getting lost by the animal fences, I
managed to stumble upon Sheffield’s office camper. I thought it would be more
elaborate, but the only discerning detail from an otherwise everyday trailer
was the large brass nameplate across the door that read “Sheffield Donovan.” I
looked at my watch: 2:01 p.m. I
hated
being late. I hurried to knock on the door.

I walked inside, turned to my
left to face Sheffield Donovan. Late fifties, surprisingly fit, with a blonde
coif and an impressive handlebar mustache that could easily be featured in a
bare-knuckle fistfight, he looked every bit a ringmaster. Were I into older
men, I could even describe him as a classic sort of handsome.

He sat behind a large, old desk
swallowed up on either side with posters and file cabinets. A shiny black top
hat sat by his hand, ready for a hasty exit. His costume—black tuxedo
pants, white shirt, gold cummerbund, and red jacket with black trim and
tails—hung neatly on the closet door to my right.

I sat in one of the two battered
wooden chairs across from him. He motioned at a coffee pot as he filled his own
mug and I shook my head, more worried about wearing the coffee than drinking
it. He spoke first.

“I’m so very sorry about your
mom. How are you doing?”

“I’ve certainly been better, but
thank you.”

“Not to pry, but what happened?”

I looked down to see my hands
drumming an incessant rhythm against my knees. I glared at my ripped cuticles,
having recently been gnawed off in my stress. I kept my head down as I answered
Sheffield.

“She had a pulmonary embolism or
something. She was breathing pretty hard in the grocery store and collapsed in
the cereal aisle. Died in the ambulance.”

“Jesus, I’m sorry, kid.” He set
his mug down on the desk, his gray eyes clouded with sympathy. My fingers
drummed faster on my thighs.

“So am I. She wasn’t the same
after Dad died, though. So at least they’re together now somewhere.”

“I’m sorry I haven’t been by to
see you since your dad’s funeral; I meant to come by and time slipped away from
us.”

I shrugged. “You’ve got a
business to run, I understand that.”

“I’m glad you called. I’ve
wanted you back here for a long time.”

“There’s not much else left for
me out in the human world. I always figured I’d make my way back.”

“Lenny was one of my best
friends. I should’ve looked out for you more. I was glad to hear from you.”

“The only reason I didn’t say
yes right away to your offer at the funeral was my mom. I couldn’t leave her
alone so soon, but I knew I’d take you up on it eventually.”

“We’re lucky to have you back.
You ready?”

“I’m a little nervous, but I’ll
get over it. I guess a lot has changed since we left.” I shifted a little in my
chair.

“In twelve years, yes; I imagine
you’ll be in for a few surprises. I have no doubt you’ll handle them fine.”

“Do you think I’ll be able to
keep up?” I kept my voice even, refusing to let any fear betray me.

“Kid, I’m more concerned if
they
can keep up with
you
. Your dad was an incredible
Firestarter, but he always said you could be ten times his talent.” He took a
gulp from his coffee mug and chuckled. “You know, he often told me the proudest
day of his life was when you set the couch on fire. You were only two and it
was a complete accident; you started to cry and then fire came out of your
hands. He said your mother almost had a heart attack, but Lenny, he was damned
proud.”

I smiled at the memory; my
father told that story a lot. I took my chance to ask a question that had
bothered me for years. Surely if anyone had the answer, it was Sheffield.

“A few years before he died, he
forbade the use of firepower. I guess he told you that?”

He gave a slow nod. “He said he
didn’t want either of you to be caught training by humans, to reveal us to
them.”

“That’s what he told me, too. We
used to find abandoned lots or fields and practice everyday. Then one week, he
came here to consult with other Firestarters, went home and put his foot
down—no fireballs, no flames, no more training. He practically threw out
any lighters in the house. Did something happen here to make him do that?”

Sheffield’s eyes didn’t leave
his mug. “He had his reasons, I’m sure. He only worried for you.”

Silence grew between us.
Sheffield was hiding something, of course, but he stayed quiet. After a long
pause, I cleared my throat.

He looked up at me and the
corners of his mouth twitched.

I shrugged. “I knew I’d be back
here someday. Can’t let his reputation down, so I had to keep up somehow.”

I gave a calm smile, kept my
well-practiced poker face up. I was done with our casual conversation. I wasn’t
here to talk about my personal life. He read my expression and after another
beat, kicked his feet up on his desk and lit a cigarette. His tone suggested
nothing but business.

“Now look, this is gonna be new
experiences for you. You were young when you were here last. Do you remember
anything about our touring from before?” he asked.

“Not really. I mostly did whatever
Dad told me to and played with the other kids.”

“Probably a lot of them are gone
now. It’s three weeks of the show, a handful of days for travel and setup, and
every few cities we take a two-week break. There are about eighty of us from
all over. We travel year round, work hard and stay together. We have very
talented folks here, but it’s a young group. Many are still developing their
skills and have years of training ahead of them.”

Sheffield talked fast and
already I could tell he expected a lot out of his employees.

“Here we prep in the day, open
the gates at five sharp, start the performances exactly at seven and are
usually done no later than midnight. We’re a bit faster on shutting down the
lot than a human group.”

“I understand. I know it’s been
a while but I’m ready to be thrown in. I can pick it up. This is where I want
to be, if you’ll keep me.”

He nodded as I spoke. His
impressive smoke rings enveloped me and the camper became smoky with each
exhale as he hammered out his words.

“I wanna give you a chance, but
you gotta earn your place around here. Strangers aren’t easily accepted, and
I’ve already got four other Firestarters that may not take kindly to the new
kid, especially since you’re a girl. No offense, but it’s rare.”

“We all have different levels
and talents. I won’t step on any toes.”

Writing on the Wall by Mary McCarthy
X-Men and the Mutant Metaphor by Darowski, Joseph J.;
True (. . . Sort Of) by Katherine Hannigan
Rules of Conflict by Kristine Smith
The Professor and the Prostitute by Linda Wolfe
rock by Anyta Sunday
Luca's Bad Girl by Amy Andrews
His Perfect Woman (Urban Hearts Series Book 1) by Towne, L. E.
Death in a Far Country by Patricia Hall
Delhi Noir by Hirsh Sawhney