Girl In A Red Tunic 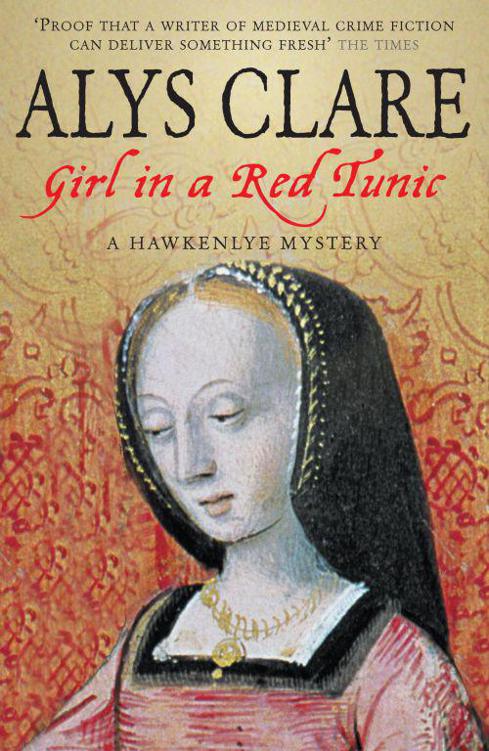 Girl in a Red Tunic

Ashes of the Elements

The Tavern in the Morning

The Chatter of the Maidens

Whiter than the Lily

First published in Great Britain in 2005 by Hodder and Stoughton

Work has been asserted by her in accordance with the

stored in a retrieval system, or transmitted, in any form or by any means

without the prior written permission of the publisher, nor be otherwise

it is published and without a similar condition being imposed

and any resemblance to real persons, living

or dead, is purely coincidental.

in memory of my father

I will always love you

in a red tunic:

He had to wait until it was dark and everyone was asleep. He watched her for a moment, his distress at what she had done competing with his love and his anguish. She began to relax – at last! – and he listened as her breathing deepened. Then he stood up and stepped quietly away.

Outside it was bitterly cold. The night was clear but the moon was not yet up. He had no need of a lantern; he could find his way well enough by starlight and it was better not to have unnecessary illumination for this deed that he must do before dawn. Furtively he made his way to the ramshackle outbuilding where he had left the handcart but, knowing only too well what was waiting for him, he hesitated at the door. But all the hesitation in the world wouldn’t make it go away. He hunched into his leather jerkin and wound his muffler more snugly round his neck then, spitting on his hands, wrenched open the flimsy door and picked up the cart’s handles.

The load was heavy. A dead weight. Grunting with the effort, he pulled the cart backwards out of the outbuilding then turned it and headed off across the yard and off down the track. The most dangerous few yards were while he was still visible from the house; if she saw him, she might—

But he made himself stop thinking about what she might do.

Soon he had passed out through the gateway and reached the deep shadow that the winter-bare trees cast on the path. That was better – he felt safer now. He pushed on, feeling the sweat breaking out across his back, and gradually the forest loomed up ahead of him.

It would be Martinmas in a few days and the forest floor cracked with beech mast and acorns. By long tradition, the people were allowed to turn their pigs out under the thickly growing beech and oak trees of the woods to fatten them before they were slaughtered and their salted meat laid down for the winter. The act was doubly necessary, for not only did the people need the meat to see them through the time when the Earth slept; in addition, killing their livestock meant they would not have to bear the cost of feeding the animals through the lean months. The ever-hungry hogs loved the abundant feed and needed no encouragement to gorge themselves.

He thought about hungry swine as he heaved the handcart up the bank and beneath the beech trees that lined the forest fringe. His own animals would be ravenous by now – almost starving, he fervently hoped – for two days ago he had rounded them up and penned them into an enclosure that he had made out of stakes driven into the forest floor and securely joined together with hurdles. As he made his arduous way along the track, soon he could hear them.

It was an awful sound. The screams and cries sounded as if someone were being cut to pieces.

He felt sick. No, he must not give in to it! He took a steadying breath. The nausea receded.

His axe was on the cart, together with a heavy mallet, and he could feel his long-bladed knife stuck in his belt. He had spent a long time honing it on the sharpening stone and now it was as keen as the finest razor. The three tools ought to make quick work of what he had to do. He would place the axe’s sharp iron blade carefully in place and then bring down the mallet on to its back with all his might, so that—

The nausea rose up again and this time he could not swallow it back. Putting down the cart handles, he turned and, bent over, hands on his knees, vomited up his paltry stomach contents – he had barely eaten all day – into the dry grass and bracken beside the track.

Eyes streaming, he wiped his mouth on his cuff, picked up the cart handles again and pushed on. Somewhere out in the mysterious darkness he heard a wolf howl. He had never felt more wretched in his life. He wondered yet again if he was doing the right thing. No, not the
right
thing, for this deed could not be right, even to the most liberally minded man. The question was whether what he was doing was in truth the only way out of this desperate trouble that they had fallen into. There was still time to turn back, to take the terrible chance of that other option, although soon that choice would be gone for ever. He thought hard, noticing with a strange detachment that even as he thought, he went on pushing the cart, as though his deeper self knew full well there was no turning back. No, he told himself firmly after some moments. I know what I
should
do but I cannot, for failure would be the end; the risk is too great. Although it is against everything that I feel, everything I believe in, I must go through with what I have set out to do.

As resolved as he would ever be, he quickened his pace and hastened on beneath the trees.

The ravenous swine must have smelt him – or his burden – some time before he reached the secret, hidden grove where he had penned them and, with one voice, they set up a terrible, unearthly sound that would have stopped him in his tracks, had that been an option. By the time he emerged into the glade, the starving animals were pushing up against the sides of the pen, making the hurdles bulge outwards in one place. With a muttered curse, the young man put down the cart’s handles and hurried over to where he had laid the surplus building materials. Grabbing a couple of stout posts, he picked up his mallet from the cart and hurried over to the weak spot in the pen’s wall. Swiftly he banged the posts into the spongy forest floor. The hurdle ceased to bulge and he breathed freely once more. The sudden sweat of fear-fuelled exertion cooled on his back; not only would it have ruined his gruesome plan had the swine escaped, he also had a fair idea of what they might have done to him.

For they were desperate. For a man such as he, who cared deeply for his creatures, the state to which his need had driven them was dreadful to witness. He stood staring into the pen and noticed that one of the pigs – a skinny young boar which had been the runt of the litter – was dead. Its fellows had begun to eat it.

He stood frozen with horror.

Then he gathered himself and fetched the cart, wheeling it as close to the pen as he could. The screams of the swine were nearly deafening now. He folded back the sacking that wrapped the cart’s heavy burden and an overpowering, slaughterhouse smell rose up. The squealing instantly intensified.

The young man stared down at the bloody body. The victim had been around thirty, short and wiry, and his pale skin looked almost transparent in death. His sparse hair had been red and he had blotchy freckles on his face.

I know what I must do, the young man thought. I must use my sharp knife to carve the meat from the bones – no, carve was not the right word; from somewhere he recalled that the act of cutting off flesh was known as flensing. Well, I must do that, and then I must use my axe blade and mallet to detach the limbs from the torso.

Tropisms by Nathalie Sarraute
The Plantagenets: The Kings That Made Britain by Wilson, Derek
The Maze of the Enchanter by Clark Ashton Smith
The Way Into Darkness: Book Three of The Great Way by Harry Connolly
Homecoming by Cynthia Voigt
Island of Mermaids by Iris Danbury
No Honor Among Thieves: An Ali Reynolds Novella (Kindle Single) by J.A. Jance
Holding Court by K.C. Held
A Gangsta Twist Saga by Clifford “Spud” Johnson
The Ice Princess by Elizabeth Hoyt