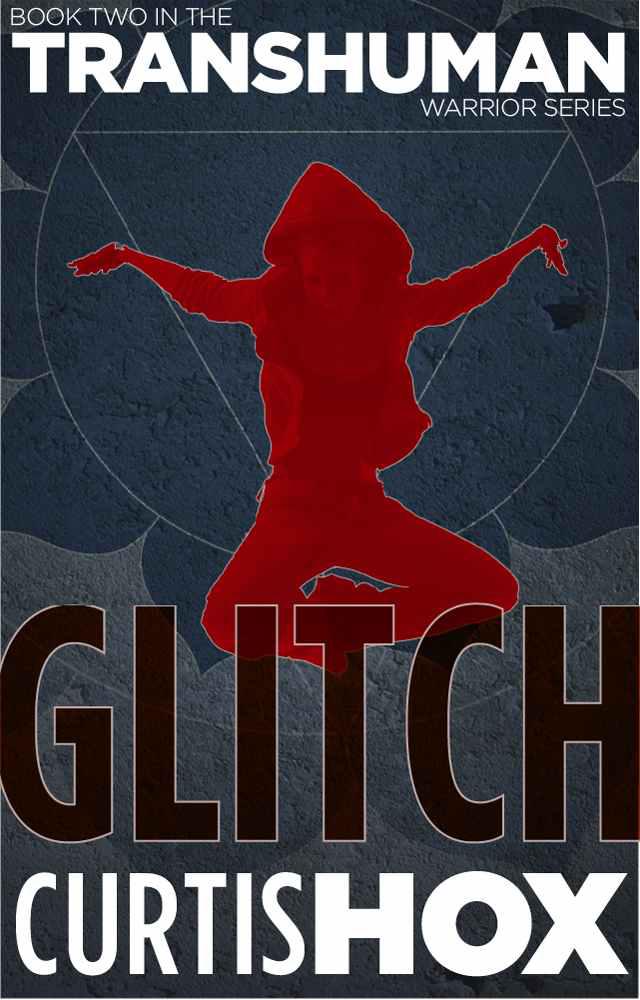 GLITCH
© 2012 Curtis Hox
All characters in this compilation are fictitious. Any resemblance to actual persons, living or dead, is purely coincidental.

Glitch
is book two of the
Transhuman Warrior Series
. As of now there are two other parts of the series,
Rupture
and
Dominion
(launch date: August 1st, 2012). They're all stand alone novels, but they follow each other in a larger story. If you enjoy
Glitch
, please take a look at the excerpt from
Rupture
in the back.

I also provide a glossary at the end of the novel (you can find it via the Table of Contents) to help readers with some newly introduced concepts.

AGE RECOMMENDATION
: This novel is intended for a high-school or older audience. It uses strong language and depicts some sexual situations. 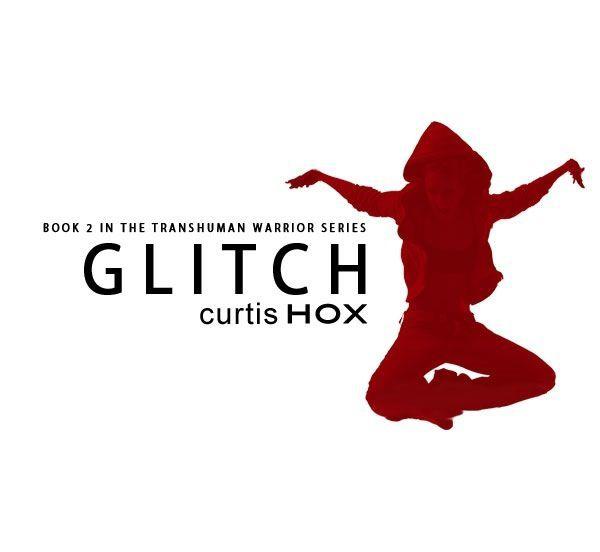 2098 - Last time Simone sees her father before he ghosts himself

2110 - Simone transfers to the Sterling School

Altertranshumans
: A Transhuman with altered or alternate (variant) enhancements. They emerged at the same time Transhumans became a norm among the rich and privileged in the mid-21st century. These technically enhanced individuals display a variety of mysterious, non-rational phenomena from basic psychic enhancements to full-form body metamorphosis. Alters were hunted and arrested for two generations because they could summon and channel strange entities that transformed them into all sorts of scary things. (Also known as Channelers, Summoners, Melders, Animators, Ragers, and Psycheads.)

Battle of the Steppe
: A turning point in the Cyber War in which a massive RAI host was defeated in Asia. After this point, the RAIs changed tactics for smaller, more specifically strategic incursions into Realspace.

Channeler/Summoner
: An Altertranshuman who can channel the energy of his or her entity or someone who can summon and bind his or her entity and allow it to manifest itself. Both labels are official classifications used by the Consortium. Terms of derision by a society that hates and fears these individuals are psy-sorcerer or psy-sorceress. This is a play on words for cy-warrior, a term of adoration for the Altertranshumans who use their gifts to work as Interfacers within Cyberspace (sometimes these are referred to as Cybertranshumans or Technowizards).

Consortium
: An institution comprised of a number of organizations, bureaucracies, corporations, agencies, and militaries that transcend national and cultural boundaries with the sole purpose of defending biological humanity. It came to power via the biotech revolution and the selling of Rejuv, a powerful brand for a suite of technologies and services most associated with human enhancements. The Consortium regulates and governs its use. The rich and privileged can buy these therapies, if they have the funds and connections. Key branches of the Consortium are the International Consortium Cybercorps Defense Force, the military branch that works in tandem with the Cybercorps Security Agency, which is the public and private intelligence branch designed to combat incursions into Realspace by the RAIs. Cybercorps Security, along with the Defense Force, creates the Consortium Cybercorps Defense Program, an experimental program designed to train Alters as weapons. The Consortium Cyber Police Agency is the branch that, in tandem with the other branches, traces Rogue activity in Cyber and Realspace.

Consortium Cybercorps Program
: a unit of Sterling School Alters to be trained in a controversial program to make them into posthuman warriors.

Cyber War (also Cywar)
: One of the major divisions of the Great Conflict. Before the Conflict ever seeped over into Realspace, it began in Cyberspace, as a war between human persons and artificial persons.

Cyberhumans/CyberTranshumans/cy-Transhumans/Cyborg
: These individuals are gifted at interfacing with computers. They use cybernetic systems in such complex ways those systems become radical extensions of humanity. Thus, they fundamentally change those persons who use them.

Cyberspace (also Cybernet)
: Cyberspace is a fully rendered virtual world accessed in a number of ways, some as simple as analog visual access via a monitor and keyboard, other ways that provide deeper access via Virtual and Augmented reality devices, and some ways as complex as full disembodied access of a person's genoscript rendered in Cyberspace.

Digital Ghost: An Unperson living in Realspace
. If an interruption occurs during the mysterious process of processing a person's essence, two copies of such a person will exist in Cyberspace and in Realspace. This highly sought-after process, guarded by the protocols, is sometimes called ghosting.

Double
: When someone is ghosted, the partial copy of them that exists in Cyberspace is called their double. The ghost, while not a corporeal person, is considered the original.

Entity
: A mysterious form of intelligence that emerged when the Rupture occurred. Some consider them alien, others just another form of artificial intelligence, others as supernatural beings.

Fight Lords Council
: Governing body of regulated SAIs who run the IGL and who also act as patrons for glad-fighting champions.

Great Incursion
: A key phase of the Cyber War that culminated in the Battle of the Steppe, where the RAIs were defeated.

General Artificial Intelligent Person (GAIP)
: A basic artificial-intelligence being recognized by law as a person.

Genoscript
: The non-mystical term used to describe a genosoul. A genoscript is a composite of all biological elements used to create a reproducibly viable phenotype, which means DNA, of course, but also all the proteins and enzymes that are used to build molecular structures and complexes needed for the development of the phenotype.

Genosoul
: A mysterious concept used in post-Rupture society to describe the core essence of a biological person. It is what must be captured in any Rejuv process (along with the actual genotype and its phenotypic expression) for a rebuilt "person" to be recognized as the same as the original.

Glad-fighter
: A gladiator. An athlete in the premier athletic sporting and artistic entertainment of the 22nd century. The most important league is the Consortium regulated IGL (International Gladiator League), which takes place in arenas around the world and are dominated by SAI fight lords who patronize a number of teams that compete to have the best champions.

Great Conflict
: Term used by cultural historians for the series of complex interactions between human and nonhuman intelligences that began with the Cyber War. The struggle is over control of the borders between Cyberspace and Realspace, with the RAIs pushing deeper into Realspace. Just as biological persons insert themselves into Cyberspace and use the landscape for their benefit, the RAIs want to use Realspace and its objects (humans) for their own benefit. Cultural historians recognize that the conflict is one centered on the master-slave relationship and is, thus, a zero-sum game. The Great Game is a term used by those close to the major players in the Great Conflict. It refers to the fact interactions between humans and RAIs are driven by protocols that require formal rules, like those in games.

Hotjacker
: Someone who has deep access into Cyberspace. The professional term is Interfacer. These individuals use Virtual and Augmented Reality devices like visors for this access.

Interfacer
: A regulated and legal person with deep access into Cyberspace. The most powerful types even get permission to enter Cyberspace as fully disembodied persons, but only for a time, and for specific purposes.

Mantras of Summoning
: Spoken and mental techniques that give an Alter control of his or her entity.

Mechabot
: Mechanized robot used by humans for a number of things from industrial to military to entertainment. Other types: Airmech and Seamech.

Metaverse
: Information accessible by high-level Interfacers. This information is vetted by personal AI assistants who analyze data and store it for quick retrieval.

Mirrorshades
: a device used by Interfacers, in conjunction with a variety of cerebral nanochips, to display Augmented Reality information in realtime. They are also used to organize information from a personal metaverse.

Nanovamp Wraith
: A fabricated monster of the RAIs who seeks to capture human genosouls by sucking the code from them.

Pit-dog Fighter
: Slang for a glad-fighter who works in the unsanctioned fights.

Protocols
: Rules of behavior coded into the first AIs on how they can interact with humans. The protocols are guarded because the RAIs want access to them so they can remove the strong regulations on their behavior.

Protocol Guardians
: SAIs (also called the Eternal Eminences) created to protect the protocols that dictate human and nonhuman intelligences' interactions, as well as a few key technologies like the ghosting process.

Psy-kata
: A series of movements that, along with the mantras, allow someone to control an entity.

Realspace
: The world of everyday reality for biological persons, as opposed to the constructed cybernetic world.

Rejuv
: A product and a process that can repair biological organisms, even rebuilding their bodies from synthetic husks.

Rogues
: These RAIs are bad AIs. They use nanotech to push into reality, sometimes infecting real humans with real viruses, other times fabricating horrible monsters like Nanovamp Wraiths. RAIs are nothing more than cybernetic intelligences living in cybernetic substrates (i.e., the silicon-based world of computers but also the electronic world of quantum computing). In the end, human brains are discovered to be nothing more than electronic signals and patterns. So, the thing, the "essence" of a person, lives up there in a brain but is highly contingent upon having a real body, just as the RAIs live in their electronic worlds of data center and wireless relay loops. Biological persons like human beings have different substrates from AIs. They are carbon-based biological organisms. The AIs are synthetic ones and zeros.