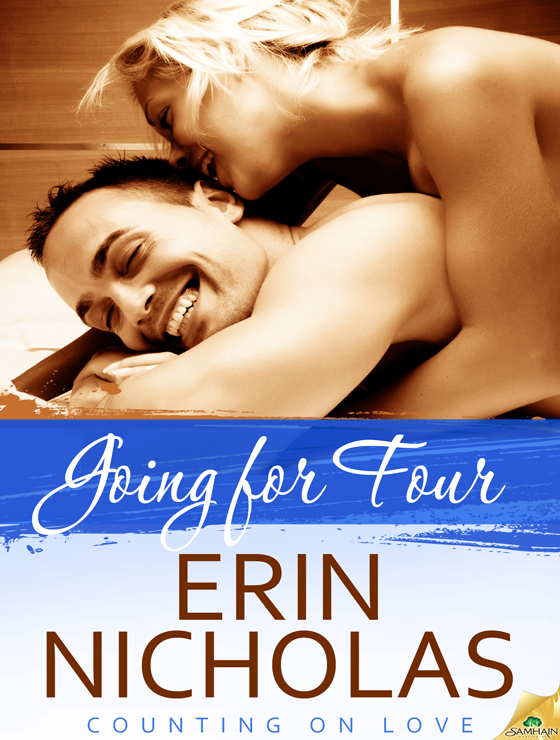 There aren’t many people who would go days without eating, sleeping or talking to their families just to help me work through sticky plots and difficult characters.

Okay, there aren’t any people who would do that.

Thanks for everything, Kim!

And there was a very good reason for that.

She was his best friend. And her brother would kill him.

But damn, the sight was breathtaking.

Breathtaking enough that his entire system short-circuited and all he could think was
Every day for the rest of my life.

She’d obviously just stepped from the bathroom. Her hair was wrapped in a towel, the scent of her favorite shower gel and lotion were strong in the air and, most significantly, she was as naked as the day she was born.

Which had to be why his brain and mouth would not connect.

Olivia crossed an arm over her breasts—her glorious, perky, perfect breasts—and put a hand over her even-more-private part—the mouthwatering, holy crap, light blond hair that was trimmed into a perfect
V
pointing the way home—and said louder, “What are you
doing
?”

But it wasn’t until another voice hit his ears that Cody was able to pull himself out of the Olivia-is-even-hotter-than-I-thought daze.

Olivia’s eyebrows arched. “Is that Conner?”

It was. And Cody’s first spoken word on the matter was, “Fuck.”

He grabbed her upper arms, backed her into the bathroom and kicked the door shut.

That proved to be the biggest mistake of all. Her skin was silky and warm and he should
never
have touched her.

Cody was an idiot. When he’d first seen that she was naked, he should have turned around and gotten the hell out of here. Instead, what had he done? He’d touched her. Then he’d put himself in a closed room with her.

“There’s a good reason we instituted the conservative-clothing-at-all-times rule,” he said gruffly.

She still had her arm and hand covering the most important parts, but that didn’t matter one iota. He was never going to be able to forget what he’d seen.

“That rule is for when we’re together,” she said.

“We’re together now.” Wow, were they. Her scent was imprinted on his brain. Now, standing submerged in a cloud of it between her and the bottles on the shelf behind her, he found himself taking deeper and deeper breaths—and growing harder and harder.

“I didn’t know we were going to be together now,” she returned. “What are you—and
Conner—
doing here?”

“Fixing the outlet in the kitchen that’s not working.” He breathed deeply and concentrated on keeping his eyes on hers. “I texted you.”

“Why are you naked?”

“I don’t need a robe when I’m in my house, presumably alone.”

“You always walk around the house naked when you’re alone?”

He had nothing after that. He pressed his lips together and resolutely continued to focus on things
above
her shoulders. Like the two empty towel racks. “Where are your other towels?”

He pulled the towel from her head, handing it to her. “God. Cover up.”

She wrapped the towel around her body, her wet hair falling past her shoulders, big blue eyes staring at him. “You okay?”

“This is, apparently, how I look when I’m trying with every fiber of my being not to kiss you.”

She made a soft choking noise and her hand grasped the towel tighter against her breasts.

“I’ve never seen that look before.”

“Yeah, I saw a few things for the first time today too.”

That was one of the things he loved most about his “friend” Olivia. She had a fantastic sense of humor.

“What I mean is,” she said, “I thought there have been times in the past when you’ve had to try not to kiss me. And I’ve never seen
that
face before.”

He cleared his throat. “Those times I was trying to resist kissing your
lips
.”

She broke off as understanding dawned. And her cheeks got pink.

“God,” she finally breathed. “The not-talking-about-sex rule we have is a good one too.”

So were the other three rules they’d established nineteen months, two weeks and three days ago.

First and foremost was no kissing.

Second was conservative clothing only when they were together. He didn’t go shirtless, even when he was cleaning out her rain gutters in ninety-eight-degree weather. She didn’t wear fitted tank tops or short skirts. He didn’t wear fitted tank tops either—she’d added that to the list after the last time they’d gone to a baseball game together. If swimsuits were required, he wore baggy trunks that reached almost to his knees, and she had a two-piece with bottoms that looked like shorts and a top that covered her stomach and chest completely.

Third was no talking about sex—with anyone specifically or the overall topic in general. No innuendos either.

Fourth was no getting drunk together—they’d made that mistake once and would have made all kinds of horrible choices if Olivia’s sisters hadn’t come home early.

Fifth was no avoiding each other. That wasn’t acceptable. They were friends. They enjoyed being together. They had an entire group of friends in common.

In fact, their friendship was one of the barriers they’d put up in hopes of fighting their attraction. They’d become even
better
friends, entirely on purpose, after the one and only time they’d kissed.

The thing was, the friends-only deal worked. It had started off as “let’s go to a movie” or “want to grab a burger” here and there, but once they’d started talking and laughing together, it had grown. When they’d discovered a mutual love for baking and had started baking together—even when he sometimes wished
baking together
was a euphemism for other things—their friendship had evolved into something real. There was something very innocent and fun and, of course, sweet about baking together. And in the process of mixing up cookies, muffins, brownies and new inventions here and there, they’d talked and shared and bonded.

Now they both protected the friendship staunchly. He’d never survive if he lost having Olivia in his life, and if that meant never kissing her again, so be it.

Or so he typically thought.

When she wasn’t naked in front of him.

He was sure that he was. “You’re still standing here in a towel.”

“I can’t fix that until you move out of the way of the door,” she said with a smile.

He nodded. “It would make sense for me to move then.”

She swallowed. “If you want me to get dressed, anyway.”

He didn’t move out of the way.

Instead, he put a hand on the side of her neck, then slowly slid it to cup the back of her head. Even more slowly, he pulled her forward. She took a reluctant step. Reluctant, maybe, but she definitely took the step.

“Kind of wish your phone hadn’t died,” he said.

“That would definitely have made this easier,” she agreed.

She grasped his wrist, not to resist, but seemingly to hold him where he was. “I was wearing jeans and a baggy sweatshirt the last time this almost happened.”

It had been February. Six months ago. He’d gone six months without almost kissing her. Not without
thinking about
kissing her, of course, but without any of this—the looking into her eyes, the touching her face, the voice that sounded like he was a three-pack-a-day smoker.

He looked at her now. This was Olivia. He could tell her anything. And they were very upfront about the attraction between them and the reasons to avoid it.

Especially the main reason. Not that they were friends. Not that he knew he’d never recover.

The main reason was Conner.

The man they would both do anything for.

The man who had specifically asked them
not
to get involved.

The man who was outside the bathroom door right now checking out a bad outlet.

Olivia’s hand fell away from his. She was clearly torn between disappointment and relief.

Cody knew how she felt. That combination of emotions was a near-constant in his life where she was concerned.

“I should get dressed.”

He shoved his hands into his pockets. “Yeah. Probably.”

He shifted to the side, so she could open the door. She still had to brush against him to get by—there simply wasn’t room to avoid touching.

When her foot was on the threshold, she looked back. “We’re in trouble now, huh?”

He took a deep breath and nodded. “Now that I know your breasts are the best I’ve ever seen…yeah, we’re in trouble.”

He’d pulled back. Or dropped his hand. Or whatever.

She, on the other hand, had been all in.

The main reason for those rules was in her kitchen fixing the outlet that wasn’t working—Conner. Her brother. Cody’s best friend.

But they could make four hundred more rules and it wouldn’t change the fact that Cody Madsen made her hot.

Her eyes slid closed and she thought about Cody. His dark hair, his dark eyes, his big hands… He was a running back for the Hawks, the popular and successful local amateur football team, so he was solid but trim. He was, quite simply, gorgeous.

She could—and did—acknowledge that there were more important things than sex and that having a friendship with Cody was worth resisting her baser urges.

Cody was…special. He let her be herself. Fully, completely, unabashedly herself. And he seemed to really like the things that made her different from her sisters.

Olivia loved her sisters and her big brother. She admired them, enjoyed spending time with them, would do anything for them. But she was different from them. She liked quieter things, simpler things—staying home curled up on the couch, baking, movies, reading. She was great at her job, but she wasn’t driven to advance or move up any career ladders. She liked to have fun, but she preferred a small dinner party to hanging out at Trudy’s. She cared about her family and friends, but didn’t feel the need to insert herself into the midst of any and all happenings in their lives.

Growing up as the youngest of the Dixons, Olivia had found that getting a share of the spotlight could be difficult. It was hard to get a word in edgewise, rarely did anyone ask her what she wanted to do, and any conversation that had to do with her favorite topics—baking and movies—was met with barely concealed yawns and glazed looks.