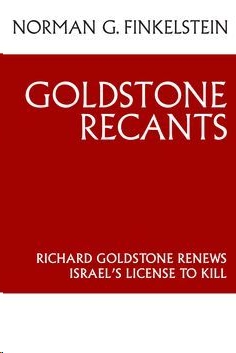 Published by OR Books, New York and London.

All rights reserved. No part of this book may be reproduced or transmitted in any form or by any means, electronic or mechanical, including photocopy, recording, or any information storage retrieval system, without permission in writing from the publisher, except brief passages for review purposes.

Sections of this pamphlet have been reproduced from Norman G. Finkelstein’s
“This Time We Went Too Far”: Truth and Consequences of the Gaza Invasion
, now published in a revised and expanded paperback by OR Books. For more information please go to www.orbooks.com.

The author wishes to thank Maren Hackmann for her assistance in preparing this pamphlet.

ON 1 APRIL 2011, in the pages of the
Washington Post
, Richard Goldstone dropped a bombshell.

He effectively disowned the massive evidence assembled in the report carrying his name that Israel had committed multiple war crimes and possible crimes against humanity in Gaza during its 2008-9 invasion.

Israel was jubilant. “Everything that we said proved to be true,” Prime Minister Benjamin Netanyahu crowed. “We always said that the IDF [Israel Defense Forces] is a moral army that acted according to international law,” Defense Minister Ehud Barak declared. “We had no doubt that the truth would come out eventually,” Foreign Minister Avigdor Lieberman proclaimed.

The Obama administration used the occasion of Goldstone’s recantation to affirm that Israel had not “engaged in any war crimes” during the Gaza assault while the U.S. Senate unanimously called on the United Nations to “rescind” the Goldstone Report.

Some commentators have endeavored to prove by parsing his words that Goldstone did not actually recant. While there are grounds for making this argument on a technical basis, such a rhetorical strategy will not wash.

Goldstone is a distinguished jurist. He knows how to use precise language. If he did not want to sever his connection with the Report he could simply have said “I am not recanting my original report by which I still stand.” He must have known exactly how his words would be spun and it is this fallout—not his parsed words—that we must now confront.

Goldstone has done terrible damage to the cause of truth and justice and the rule of law. He has poisoned Jewish-Palestinian relations, undermined the courageous work of Israeli dissenters and—most unforgivably—increased the risk of another merciless IDF assault.

There has been much speculation on why Goldstone recanted. Was he blackmailed? Did he finally succumb to the relentless hate campaign directed against him? Did he decide to put his tribe ahead of truth?

What can be said with certainty, and what I will demonstrate below, is that
Goldstone did not change his mind because the facts compelled him to reconsider his original findings
.

IN APRIL 2009 the president of the United Nations Human Rights Council appointed a “Fact-Finding Mission” to “investigate all violations of international human rights law and international humanitarian law that might have been committed at any time in the context of the military operations that were conducted in Gaza during the period from 27 December 2008 and 18 January 2009, whether before, during or after.”

Richard Goldstone, former judge of the Constitutional Court of South Africa and former Prosecutor of the International Criminal Tribunals for the former Yugoslavia and Rwanda, was named head of the Mission.

The Mission’s original mandate was to scrutinize only Israeli violations of human rights during the assault on Gaza, but Goldstone made his acceptance of the job conditional on broadening the mandate to include violations on all sides. The council president invited Goldstone to write the mandate himself, which Goldstone did and which the president then accepted. “It was very difficult to refuse . . . a mandate that I’d written for myself,” Goldstone later observed.

Nonetheless Israel did not cooperate with the Mission on the grounds of its alleged bias.

In September 2009 the long-awaited report of the Goldstone Mission was released. It was a searing indictment not just of the Gaza invasion but also of the ongoing Israeli occupation.

The Goldstone Report found that much of the death and destruction Israel inflicted on the civilian population and infrastructure of Gaza was premeditated. The assault was said to be anchored in a military doctrine that “views disproportionate destruction and creating maximum disruption in the lives of many people as a legitimate means to achieve military and political goals.” The “disproportionate destruction and violence against civilians” were said to be part of a “deliberate policy,” as were the “humiliation and dehumanization of the Palestinian population.”

Although Israel justified the attack on grounds of self-defense against Hamas rocket attacks, the Goldstone Report pointed to a different motive. The invasion was “aimed at punishing the Gaza population for its resilience and for its apparent support for Hamas, and possibly with the intent of forcing a change in such support.”

The Report concluded that the Israeli assault on Gaza constituted “a deliberately disproportionate attack designed to punish, humiliate and terrorize a civilian population.”

It ticked off a lengthy list of war crimes that Israel committed such as “willful killing, torture or inhuman treatment,” “willfully causing great suffering or serious injury to body or health,” “extensive destruction of property, not justified by military necessity and carried out unlawfully and wantonly,” and “use of human shields.”

It further found that Israeli actions that “deprive Palestinians in the Gaza Strip of their means of sustenance, employment, housing and water, that deny their freedom of movement and their right to leave and enter their own country, that limit their access to courts of law and effective remedies . . . might justify a competent court finding that crimes against humanity have been committed.”

The Goldstone Report pinned primary culpability for these criminal offenses on Israel’s political and military elites: “The systematic and deliberate nature of the activities . . . leave the Mission in no doubt that responsibility lies in the first place with those who designed, planned, ordered and oversaw the operations.”

It also found that the fatalities, property damage, and psychological trauma resulting from Hamas’s “indiscriminate” and “deliberate” rocket attacks on Israel’s civilian population constituted “war crimes and may amount to crimes against humanity.”

Because the Goldstone Mission (like human rights organizations) devoted a much smaller fraction of its findings to Hamas rocket attacks, critics accused it of bias. The accusation was valid, but its weight ran in the opposite direction. If one considers that the ratio of Palestinian to Israeli deaths stood at more than 100:1 and of dwellings ravaged at more than 6000:1, then the proportion of the Goldstone Report given over to death and destruction caused by Hamas in Israel was much greater than the objective data would have warranted.

THE ISRAELI REACTION to the Goldstone Report came fast and furious. Apart from a few honorable exceptions such as
Haaretz
columnist Gideon Levy, it was subjected for months to a torrent of relentless abuse across the Israeli political spectrum and at all levels of society.

Israeli President Shimon Peres ridiculed the Goldstone Report as a “mockery of history,” and Goldstone himself as a “small man, devoid of any sense of justice, a technocrat with no real understanding of jurisprudence.” Prime Minister Benjamin Netanyahu purported that the Report was “a kangaroo court against Israel,” and Defense Minister Ehud Barak inveighed that it was “a lie, distorted, biased and supports terror.”

Michael Oren, the current Israeli ambassador to the United States, intoned in the
Boston Globe
that the Goldstone Report “must be rebuffed by all those who care about peace”; alleged in an address to the American Jewish Committee that Hezbollah was one of the Report’s prime beneficiaries; and reckoned in the
New Republic
that the Report was even worse than “Ahmadinejad and the Holocaust deniers.”

The
Jerusalem Post
editorialized that the Goldstone Report was “a feat of cynical superficiality” and was “born in bias and matured into a full-fledged miscarriage of justice.” Former
Haaretz
editor-in-chief David Landau lamented that the Report’s “fundamental premise, that the Israelis went after civilians,” eliminated any possibility of “honest debate.” Settler movement leader Israel Harel deemed the Report “destructive, toxic” and misdirected “against precisely that country which protects human and military ethics more than the world has ever seen.”

BACK IN THE U.S. the usual suspects rose (or sunk) to the occasion of smearing the message and the messenger. In a posting on
Commentary
’s website Max Boot dismissed the Goldstone Report as a “risible series of findings,” and former U.S. ambassador to the United Nations John Bolton opined in the
Wall Street Journal
that “the logical response to this debacle is to withdraw from and defund” the Human Rights Council.

Elie Wiesel condemned the Goldstone Report as not only “a crime against the Jewish people” but also “unnecessary,” ostensibly because “I can’t believe that Israeli soldiers murdered people or shot children. It just can’t be.”

Harvard’s Alan M. Dershowitz alleged that the Goldstone Report “is so filled with lies, distortions and blood libels that it could have been drafted by Hamas extremists”; that it recalled the “Protocols of the Elders of Zion” and was “biased and bigoted”; that “every serious student of human rights should be appalled at this anti-human rights and highly politicized report”; and that Goldstone was “a traitor to the Jewish people,” an “evil, evil man” and—he said on Israeli television—on a par with Auschwitz “Angel of Death” Josef Mengele.

The “essence” and “central conclusion” of the Goldstone Report, according to Dershowitz, was that Israel had a “carefully planned and executed policy of deliberately targeting innocent civilians for mass murder”; that Israel’s “real purpose” was “to target innocent Palestinian civilians—children, women and the elderly—for death.”

In fact Dershowitz conjured a straw man: the Goldstone Report never said or implied that the principal objective of Israel’s attack was to murder Palestinians. If the Report did allege this, it would have had to charge Israel with genocide—but it didn’t.

ONE MIGHT WONDER why the Goldstone Report should have triggered so much vituperation in Israel and set off a global diplomatic blitz to contain the fallout from it. After all, the Goldstone Mission’s findings were merely the last in a long series of human rights reports condemning Israeli actions in Gaza, and Israel has never been known for its deference to U.N. bodies.

The answer however is not hard to find. Goldstone is not only Jewish but—in his own words—a “Zionist” who “worked for Israel all of my adult life,” “fully support[s] Israel’s right to exist” and is a “firm believer in the absolute right of the Jewish people to have their home there.”

Goldstone has also claimed the Nazi holocaust as the seminal inspiration for the international law and human rights agenda of which he is a leading exponent. Because of Goldstone’s credentials, Israel could not credibly play its usual cards—“anti-Semite,” “self-hating Jew,” “Holocaust denier”—against him.

In effect Goldstone’s persona neutralized the ideological weapons Israel had honed over many years to ward off criticism.

Compelled to face the facts and their consequences, disarmed and exposed, Israel went into panic mode. Influential Israeli columnists expressed alarm that the Goldstone Report might impede Israel’s ability to launch military attacks in the future. Prime Minister Netanyahu ranked “the Iranian [nuclear] threat, the missile threat and a threat I call the Goldstone threat” the major strategic challenges confronting Israel.

In the meantime Israeli officials fretted that prosecutors might pursue Israelis traveling abroad. And indeed, shortly after the Goldstone Report was published, the International Criminal Court announced it was contemplating an investigation of an Israeli officer implicated in the Gaza invasion. In December 2009 Tzipi Livni cancelled a trip to London after a British court issued an arrest warrant for her role in the commission of war crimes while serving as foreign minister and member of the war cabinet during the invasion.

“Months after it was published,” an Israeli columnist rued, “the Goldstone Report still holds the top spot in the bestseller list of Israel’s headaches.”