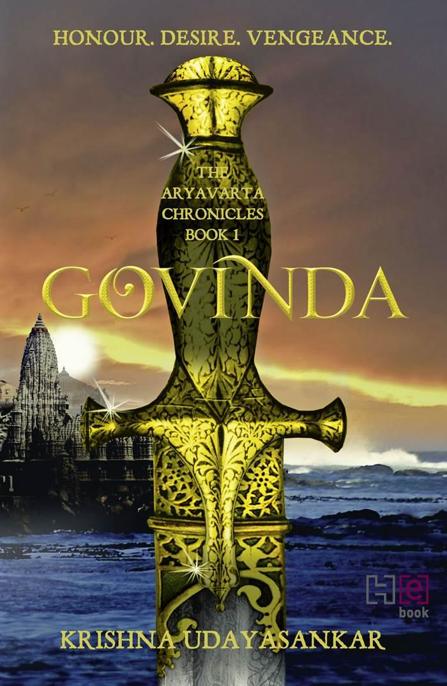 First published in 2012 by Hachette India

All rights reserved. No part of the publication may be reproduced, stored in a retrieval system (including but not limited to computers, disks, external drives, electronic or digital devices, e-readers, websites), or transmitted in any form or by any means (including but not limited to cyclostyling, photocopying, docutech or other reprographic reproductions, mechanical, recording, electronic, digital versions) without the prior written permission of the publisher, nor be otherwise circulated in any form of binding or cover other than that in which it is published and without a similar condition being imposed on the subsequent purchaser.

This is a work of fiction. Any resemblance to real persons, living or dead, is purely coincidental.

Standing on the Shoulders of Giants

In a large glen somewhere in the verdant forests of Naimisha, a sattra, or conclave of scholars, has been convened by the
sage Saunuka Kulapati. Here, in what is described as a sacrifice lasting twelve years, the finest scholar–seers of the land,
the keepers of knowledge, have gathered to discuss the knowledge of their times and give final form to its codification as
the Vedas, Books of Knowledge. At the centre of this conclave stands Ugrashravas Sauti, the bard, traditional keeper of the
ancient narratives known as the Puranas. The story he tells them, however, is their own, the tale of who they are and how
they have come to be there.

He calls it
Jaya
. Victory.

To the gathered scholars at Naimisha, that story was neither ancient nor mythological. It was itihasa, or history.
Jaya
was undeniably a tale of its time, and just as posterity elevated the great men of that time and saw them as gods, so too
was the story’s context adapted and its reality turned into metaphor. In order to go behind the metaphor, and to tell the
tale as mytho-history rather than mythology, the essential question that came to my mind was: If Govinda and all the other
characters of this grand narrative had walked the world as we know it today, bound by our languange and constructions,
our common perceptions of physics, psychology and politics, what might their story really have been? Surprisingly, at its
core it may not have been very different from the one that took form millenia ago during the conclave of Naimisha.

Like societies, stories are made up of two elements that I call (admittedly with neither theological nor philosophical expertise)
moral
imperative
and moral
principle
. Moral principles are the relatively immutable values that guide human life, perhaps even underlie philosophical evolution,
whereas moral imperatives are the derivative rules that are part of social structure, the behavioural norms embedded in everyday
interaction. These norms are often context-specific and change as the structure of society changes. At the same time, for
any social institution to survive, it must either adapt to these changing imperatives, or else justify defying them.

Through a process of re-interpretation and interpolation, even some aggrandization, the many unnamed narrators who have passed
down such epic tales through the centuries have recast some events and explained others differently to make them not just
palatable but also plausible and relevant to their audience. What remains constant, however, are the broad sweep of the story
and the moral principles that underlie it.

There began the quest for the story that lay hidden beneath the larger epic tales of ancient India. The story that emerged
as a result is the product of research and analysis based on both mainstream and alternative (e.g. Bhil and Indonesian Kakawain)
narratives, the details of which are given at the back of this book.

Based on these works, ranging from Bankimchandra Chattopadhyay’s and K.M. Munshi’s interpretations in their books
Krishnacharitra
and
Krishnavatara
respectively to Van Buiten’s critical translations of the epic’s texts and Alf Hiltebeitel’s scholarly research papers and
books on their symbolism-rich language, and to alternative Bhil and Indonesian Kakawain versions, to name a few sources, it
becomes possible to construct a story of why things may have happened as they did, a plausible narrative with reasonable internal
logical consistency. Something that could well
have been history, something that stands firm not just on faith but also on logic and science. In short, the story of why
something might have happened.

And so, Aryavarta comes to life not as a land of demigods and demons in strife, but as an empire of nobles, commoners and
forest-dwellers in socio-economic conflict. Kalas, Yugas and the Wheel of Time make sense as theories of revolution and renewal,
and the terrible Rakshasas of legend can be seen as Rikshasas – Vriksha or tree-people – their horned heads and fanged teeth
morphed back into animal-horn helmets and tiger-tooth necklaces. The mythical epic of old, a story of gods and all-encompassing
divine will in action, then falls into place as the tale of a feudal, agrarian hierarchy based on natural law and religion,
caught in the throes of technological and economic change. In fact, the moment we do away with assumptions of both preternatural
and supernatural forces, of omnipotence and divinity, we find ourselves necessarily seeking out political, social and even
psychological explanations – including theories of conspiracy and political intrigue.

We are the stories we tell.
The Aryavarta Chronicles
are neither reinterpretation nor retelling. These stories are a construction of reality based on a completely different set
of assumptions – a distinction that is important because constructing shared reality is what links individual to society,
however widely we may define the latter. To that extent, it no longer matters whether these events happened or not, or whether
they happened in a completely different way, because the idea that such things have come to pass has affected the lives of
many for a very long time now. There is a sanctity which has developed as a result of what people have come to think and do
as they have interacted with the spirit of these epic tales and their characters, with the world of Aryavarta. At the end
of the day, that spirit is much, much larger than any story, or a book.

I am simply one of those innumerable bards who passes the story on, contexualized and rationalized but not lacking in sincerity
or integrity. It is you, the reader, who shall infuse it with meaning and bring it to life as you will.

We shall know the divine spirit within

We shall meditate on the essence of all beings

Thus, the all-pervading shall blaze forth.

Hot Holiday Houseguests by Dragon, Cheryl
Lifesaver by Louise Voss
AWOL with the Operative by Thomas, Jean
Acting Out by Paulette Oakes
Girl at War by Sara Novic
Isabella's Last Request by Laura Lawrence
For Love or Money by Tara Brown
Iron Eyes Must Die by Rory Black
The Unseen by Hines
The Journey Prize Stories 24 by Various