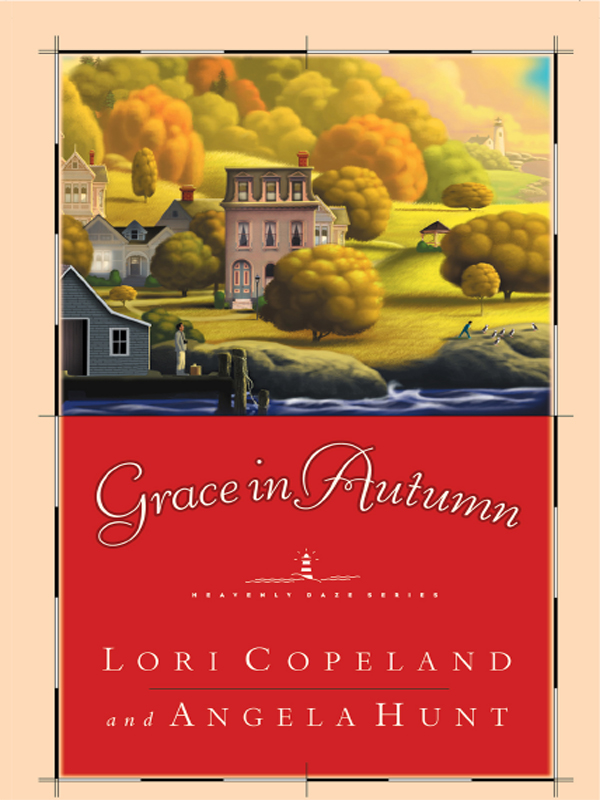 All rights reserved. No portion of this book may be reproduced, stored in a retrieval system, or transmitted in any form or by any other meansâelectronic, mechanical, photocopy, recording, or any otherâ except for brief quotations in printed reviews, without the prior permission of the publisher.

This is a work of fiction. Names, characters, places, and incidents either are the product of the authors' imagination or are used fictitiously. Any resemblance to actual persons, living or dead, events, organizations, or locales is entirely coincidental.

And this same God who takes care of me will supply all your needs from his glorious riches, which have been given to us in Christ Jesus.

âPaul, writing to the Philippians

S
ometimes, when the autumn wind sweeps in from the ocean and wraps icy tendrils around your neck, life on an island off the coast of Maine can be a far cry from comfortable. I suppose that's why humans don't always relish the thought of visiting our little town in the month of November. I also suppose that's why the folks who live on Heavenly Daze year round are not what you'd call soft. I've heard them describe each other as “tough as pitch knots”âand intend the phrase as a high compliment.

Maine folks are peculiar that way, and Maine island folks are the most peculiar of all. I've been watching the comings and goings of the humans on Heavenly Daze for over two hundred years, and they never cease to entertain, amuse, and inspire me.

Maybe
inspire
is the wrong wordâI'm not quite as handy with the English language as some of my brothers. They live among the humans here, while I tend to remain in the background, acting as a messenger between the Lord and his servants. What I meant to say is that humans inspire me to wonder . . .

Long ago, when the Creator breathed life into dust and called forth a man, I wondered at his purposes. Generations later, when the Son stepped down from his throne to offer his life for the sons of Adam, I marveled at his love. And now, as I watch those who are called by Jesus' name struggle to do his will, I am amazed by his faithfulness and patience.

Over two hundred years ago, you see, a child of God called Jacques de Cuvier begged the Lord to guard the inhabitants of this tiny island. In answer to Jacques's sincere prayer, the Lord dispatched me and six others of the angelic host. Our mission is simple: We guard and serve those who live in the seven original buildings on the island of Heavenly Daze.

I am Gavriel, the captain of this little company, and I guard the church. Unlike the others, I rarely find it necessary to don mortal flesh, for most of my work is done in secret. But the othersâah! My brothers live in mortal flesh and age along with the humans they serve, retiring to heaven at the end of an ordinary human life span, then returning in renewed flesh to continue the work they have begun. The cycle of life continues unbroken, as does our careful watchcare. Through it all, the sons of men continue to go about their daily lives, unaware of their unique position.

And so we enter another November, a time of increasing chill and frostiness. The first snow is falling as I write this, snowflakes spiraling through bare branches and gently dusting the sloping roofs of our historic homes.

But no matter. All hearts are warm in Heavenly Daze.

T
railing a frosty breath vapor up Main Street, postmistress Beatrice Coughlin huddled into her jacket and pressed harder on the pedal of her golf cart. Cold wind mixed with rain and snow swept from a pewter-colored sky. Maine winters could be a right down frightâpure misery for mail carriers and meter readers.

Wheeling the cart around the corner, Bea groaned when she felt the vehicle's right back wheel hit a pothole.

Heavy fall rains had turned the entire island into one big rut. If recent precipitation was a reliable forecast of the coming winter, she was going to be a gormy cuss by January, for certain.

Springing from the cart, she bent into the wind, peeking at the trapped back wheel. Wind whipped her flannel scarf and stung the tip of her nose.

Delays, delays. She still had to deliver a handful of encouragement cards for Edmund de Cuvier and the usual bills for the Grahams before she could seek shelter and a warm fire.

She glanced up, blinking snow out of her eyes. She might be a senior citizen with legs that felt remarkably like two rusted rain gutters, but she could walk the rest of her mail route if need be. She couldn't, however, leave the cart sitting at this cockeyed angle. Floyd Lansdown was likely to take his cart out for a quick trip to the bakery, and if he'd been fool enough to forget his glasses (not unusual for Floyd), he was bound to smack straight into her vehicle.

Bea looked up to see Buddy Franklin rounding the corner in long, purposeful strides. “Oh, my,” she murmured. “Look what the wind blew in.”

The flaps of a fluorescent orange cap hugged Buddy's angular face and accented the wiry goatee sprouting from his youthful chin. Maxwell Franklin, known to the islanders as Buddy, was as friendly as a six-week-old pup and often as irritating. Buddy lived with his sister Dana Klackenbush at the Kennebunk Kid Kare Center. Unlike Buddy, Dana worked hard and took pride in her accomplishments while Buddy drifted from project to project with no real purpose. After coming to Heavenly Daze last year broke and down on his luck, he was managing the Lobster Pot during tourist season. Rumor was he was trying to buy the restaurant and turn it into a taco establishment. Bea shuddered at the thought. A taco hut in Heavenly Daze? Who'd ever heard the likes?

“Hey, Bea.” Buddy approached in the whirling snow, hands buried in his heavy down jacket. On a coatless day, Buddy's arms revealed evidence of his stint in the navy. His multicolored tattoos (Mother, Kiss My Biscuits, and Don't Take Bilge from Nobody!) ran the length of his spindly arms. Buddy had apparently intended to make a career of the navy, but after one week at sea he was shipped home, green as a gourd. A doctor said the sea and Buddy would never get along. He was landlocked for the remainder of his duty and took an early out.

“Morning, Buddy.” After giving the young man a curt nod, Bea shifted her gaze to the stuck wheel.

Dark chocolate brown eyes shaded by heavy brows followed her gaze. Buddy studied the wheel as if it were a novelty instead of a usual occurrence this time of year. Then: “Are you stuck?”

Bea narrowed her eyes at the boy, thinking about what her sister Birdie would say in response to such a silly question:
A mind is a terrible thing to waste.

Bea shoved the cynical words to the back of her mind. “Ayuh. Stuck.”

Buddy's eyes moved to the opposite side of the cart, as if the answer to her predicament lay along the axle between the airborne wheel and the one in the rut. Finally he said, “Want me to go get Abner?”

“Abner's baking pastry.” She sighed, resigned to the inevitable. “How about you helping?”

Buddy looked up, blank faced. “Me?”

“You.” Bea motioned to the back of the cart. “It's a little cart. A lift and a push will get me going.”

Buddy shrugged, his face pale against the dark color of his jacket. “Whatever.” He stepped around her, then slid behind the wheel.

Crossing her arms, Bea waited. Did he expect her to push and him to drive? Apparently.

He glanced up, one eyebrow shooting almost to his hairline.

Shrugging, he meekly got out. “Whatever.”

Bea settled behind the wheel, keeping an eye on Buddy as he sauntered to the back of the cart. Adjusting his gloves, he pulled the collar of his coat tighter, then bent to tie his boot.

Bea drummed her gloved fingers on the steering wheel. Spitting snow was pelting the golf cart, and her bones ached when she thought of home. Right now Birdie was probably brewing hot tea to go with the cherry Danish Abner was sliding out of the oven.

Straightening, Buddy fished in his back pocket for a handkerchief. Bea watched as he blew his nose, wiped his chin, then wadded the hankie into his back pocket.

She nodded, huddling deeper into her coat, aware that
about
was the operative word. Closing her eyes, she mentally conjured up sunshine and balmy breezes, even though warm weather in Heavenly Daze meant she'd spend more time renting bicycles to tourists than dispensing stamps and postage. But she lived a comfortable life and had ever since returning to the island all those years ago.

Had Frank been dead fifteen years now? She opened one eye to do the math, then shut it again when the wind blew snow into her face. After her husband's death, Birdie had insisted that Bea come home and work at the small post office and handle the bicycle and binocular rentals. Binoculars didn't do so well this past summer season, but Birdie kept insisting they were a sound investment. Abner thought portable beach cabanas might be more profitable, but what did a pastry chef know about tourists?

Bea's lips curved in a smile at the thought of Abner Smith. The man had proved to be a godsend to both her and Birdie. He'd come to the islandâwell, she didn't know exactly when he'd arrived, but he'd been there long enough that people no longer referred to him as an off-islander. The small man, whom tourists frequently mistook for Dustin Hoffman (albeit a Hoffman with a spare tire around his middle), worked tirelessly. Whether Birdie asked him to decorate a cake, cut out gingerbread, or bake dog biscuits, he never complained. In fact, Bea had never known him to say a bad word about anybody. For two women getting on in years, Abner Smith was a real blessingâ though Birdie didn't admit to aging a-tall.

“Shake a leg, Buddy. My old bones can't take much of this weather,” Bea called. “It's blowin' fit to make a rabbit cry.”

The young man unwrapped a piece of gum, frowning when the wind snatched the paper and sent it spiraling toward the ferry. As he leaned forward to take off in hot pursuit, Bea stretched across the cart and snagged the hem of his coat.