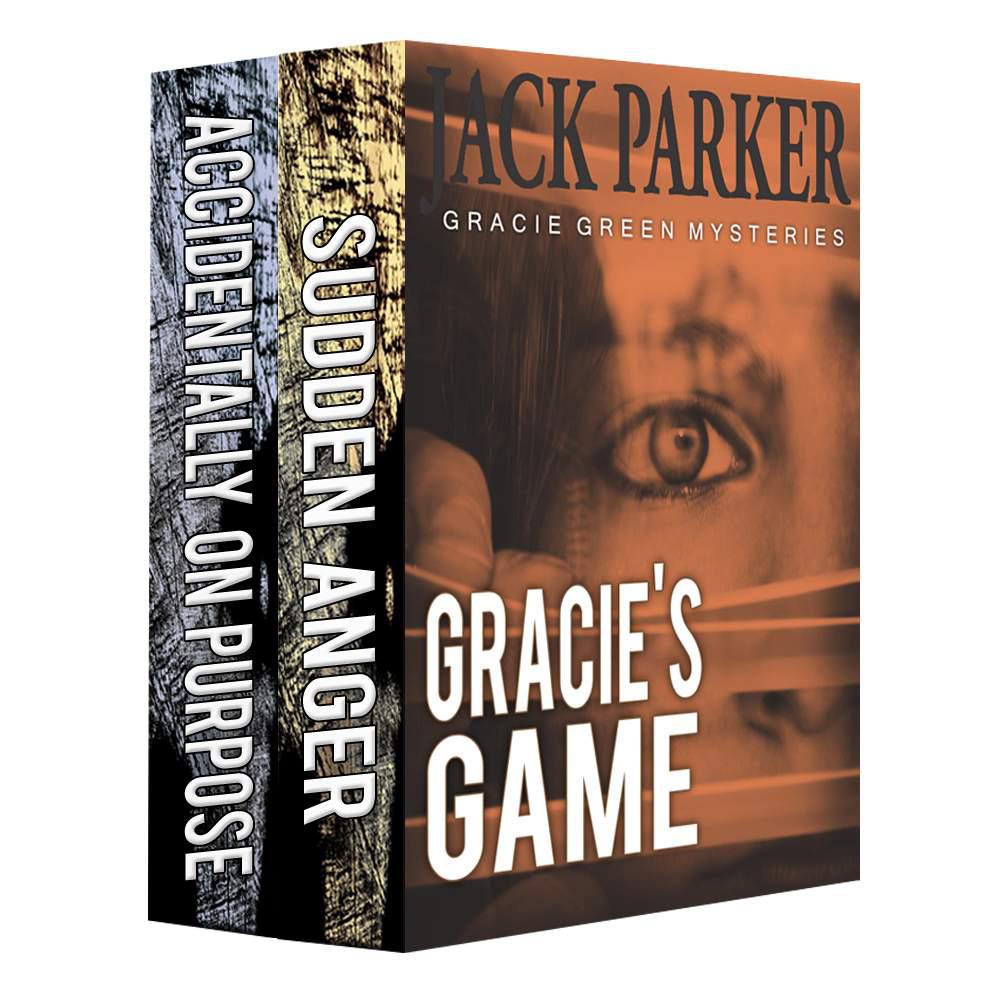 No part of this book may be used or reproduced, in any manner whatsoever without written permission except in the case of brief quotations embodied in critical articles and reviews.

This is a work of fiction. Names, characters, places and events are products of the author’s imagination or used in a fictious manner. Any resemblance to actual persons, living or dead, or to events or locations is entirely coincidental.

Book 1 in the Gracie’s Game
CHAPTER 1

"Oh, Mo-om!"
Gracie Greene's voice held all the disgust and personal injury that only a sixteen year old girl can inject into a tone. "Puh-lease, do we
have
to go?" Gracie had just come in from her room in response to her mother's call and they were standing in the middle of the living room, squared off in front of each other in a scene every parent of a teenager is overly familiar with.

The room should've given off a quiet and controlled serenity with its pale blue walls and carpeting in a medium shade of gray. The very traditionally styled furniture was a dark wood with upholstery in maroon or black. But the room held surprising touches of color and whimsy, giving it a comfortable and inviting ambience. Pictures of lovely sunny landscapes adorned the walls, and there was a profusion of throw pillows in shades of orange, blue, and gold; all sported images of brightly-colored art deco flowers, looking more like stained-glass than fabric. Houseplants sat on many of the tables, with taller ones in the corners. Those were Gracie's contribution to the décor.

"Don't you want to see your brother?" her mother asked. "He doesn't come home from college very often; I thought you'd like to spend some time with him." She shook her head rather sadly. "Though God knows I can't really blame him for not wanting to deal with this dysfunctional family. We don't have room for him to stay here, and he and your dad don't get along."

"Yeah, I'd like to see Clarke." Gracie made it sound like it was the last thing she wanted to admit. She shuffled her feet and hung her head, then rolled her eyes upward so she could see her mother. "It's just that I probably won't get much time to talk to him with everyone else there. And I
sure
don't want to see that bimbo."

"I don't like her either, Gracie. She's the quintessential trophy wife and I'm sure all she wants from him is his money. I knew your father would get married again after I divorced him; I think they deserve each other! Though I suspect your dad keeps her on a pretty tight leash. She's certainly not wearing designer fashions or dripping diamonds. However, I'd really prefer you didn't use that term. It's demeaning."

Gracie's posture changed from contrite to confrontational. "She deserves it, Mom," she replied with some heat. "All she ever talks about is clothes, jewelry, make-up and wanting to re-decorate the house. She's pretty, I'll give her that, but she doesn't have a brain in her head. I suppose Justin will be there, too."

The sudden change of topic threw her mother for an instant and she gave her daughter a confused look. She should be used to that from Gracie by now. "He lives there, Gracie. Don't you think I want to see my other son too?" she asked, her tone begging her daughter to see her side of things. "I know he's going through a stage of acting like his parents are too stupid to live, but I love him too."

"I know you do, Mom," Gracie replied grudgingly, relaxing her stance a bit. "It's just that he always acts so dorky." Privately Gracie thought,
"And you can't see that he's stoned half the time. It's probably the only way he knows to get some attention from Dad."

"There'll be other people there. Bill will be there, I'm sure. You and he can talk about saving the planet. Bring your suit, so you can go swimming."

"How can I save the planet if we take the SUV? It uses twice the gas that Clay's truck does, can we use it?" she asked. She turned to look at the man sitting on the couch. "Clay, can we take your truck if we have to go?"

Clay Wilson was a tall, dark, and handsome architect who was pretending to read the newspaper so he could keep his nose out of this embarrassing discussion. He looked up, blinked as if focusing on the situation for the first time, and said, "Uh, sure, I guess. If it's OK with your Mom." He looked at his girlfriend questioningly. "I don't mind, Clarissa," he said.

"I'd rather take the Escalade," Clarissa Stewart said firmly. "It's a little mean of me, I know, but I like to remind Charles that he had to pay for it in the divorce. Think of it as car-pooling, Gracie, since there will be three of us. That spreads the carbon footprint out a little, doesn't it?"

"Not really, Mom," she said. "You don't
need
the Caddy, it's huge. I don't know why you don't get a smaller car - one that gets better mileage." Gracie was serious about all things environmental.

"Well, for one thing, it's paid for. I could afford to get something smaller, I just don't see why I should spend money when I've already got a perfectly good car," her mother replied reasonably.

Clay folded the paper and laid it on the coffee table. "I'm just gonna go move my truck," he said as he stood up. "You guys better get a move-on, party starts at 1:00 and it's a quarter 'til now." He stuck his hand in his pocket and jingled the keys as he walked out of the room.

"Clay's right, we'd better get going," Clarissa said. They'd had the car discussion many times, and she really didn't want to go through it all again. She'd gotten a good settlement from the divorce; she'd bought a nice, if small, house in a pleasant neighborhood with a chunk of it. She'd gotten a job mostly because she'd wanted to, it gave her something to do; but it also allowed her to manage her expenses without dipping into those funds, like buying a new car. She knew Gracie had a valid point, but Gracie seemed to think money magically appeared in your bank account. That was probably because her father gave her everything she showed the least bit of interest in; everything except his time and attention.

Which reminded her. "Take your iPod, that way you can tune us out if you want to. Now, go get changed and don't forget your swim suit."

Gracie turned her head to glance at the front door and said, "I don't think Clay really wants to go either, Mom."

"I doubt it's high on his list of afternoon activities," she said. "But he knows this is important to me, and he loves me, so he's willing to go along. I like having Clay with me when I go over there."

"That's because it pisses Dad off to see you with a man that treats you decently," Gracie said.

"Well, yes, it does," her mother replied with a grin. "Anything wrong with that?"

Gracie grinned, too. "No there's not. Clay's a nice-looking guy, and way smarter than Miss Big Boobs. I don't know why you don't marry him. He sleeps here every weekend!"

Clarissa's face took on a slightly worried look. "We haven't really talked about it," she said a little haltingly. "Neither of us had good marriages, we don't want to jump into another one too soon. Besides, I
like
having time for myself - and time to spend with you. I'm not sure we'd have that if I married Clay."

"Jennifer
does
have huge honkers, doesn't she," Clarissa continued, changing another uncomfortable subject. I'll bet you an ice-cream cone that she's wearing something that shows everything but nipples. Rocky Road!"

"No bet!" Gracie said. "It's gross the way she bends over all the time. I can understand her wanting to give the guys a good view, but I don't know why she thinks
I'd
be interested."

"She does it to me, too. I think she wants us to feel inadequate." Clarissa looked at her watch and said, "We're going to be late - go get changed!"

Gracie mentally compared their clothes. Her mother wore white slacks and a red print blouse; expensive, but not excessively so. She was still an attractive woman at forty, lithe and graceful and careful to keep her figure in good shape. Her dark shoulder-length hair was cut in a flattering and current style, framing an oval face and showing off her bright blue eyes. She wore some good-quality costume jewelry, and had had a fresh manicure that morning.
"Mom's trying to look classy to show up that gold-digger - but she's doing a great job of it!"
Gracie thought to herself.

Gracie considered herself average in all ways. Average height, average weight, average face, average figure. In actuality she was what was called "nice looking", pretty without being gorgeous. She had a nice figure but had inherited some of her dad's chunkiness, which bothered her a little; she was used to comparing herself to her mother's svelte stature and hadn't yet figured out that curvy was good too. Her long straight hair was medium brown, a cross between her mother's near-black and dad's sandy blond. She had pretty blue eyes and a Cupid's bow mouth in an oval face without makeup - she liked the "natural look" (makeup contained chemicals), and carried it off well.

She looked down at her own jean-shorts and T-shirt (it read 'There Is No Planet B') and said, "I'm fine, Mom.
You
can dress up if you want, but I'm not gonna try to impress Dad. He'll just have to accept me the way I am. These are cotton, they're natural; it doesn't take as much processing to make them."

Clay opened the front door, stuck his head in and yelled, "C'mon Ladies, we need to get a wiggle on!"

Clarissa turned towards him and said, "Be there in a sec!" Then to Gracie, "I'll meet you out front, go get your stuff."

With a loud sigh of resignation Gracie headed to her room.

Speak to the Devil by Duncan, Dave
The Queen of Cool by Claudia Hall Christian
Once Was: Book One of the Asylum Trilogy by Miya Kressin
The Omega Children - The Return of the Marauders (A young adult fiction best seller): An Action Adventure Mystery by Shane Mason
Break Me (The Summer Series) by James, Harper
The Fire Sermon by Francesca Haig
About Last Night by Belle Aurora
Reconstruction by Mick Herron
Entranced By Him by Cassandra Harper
See If I Care by Judi Curtin